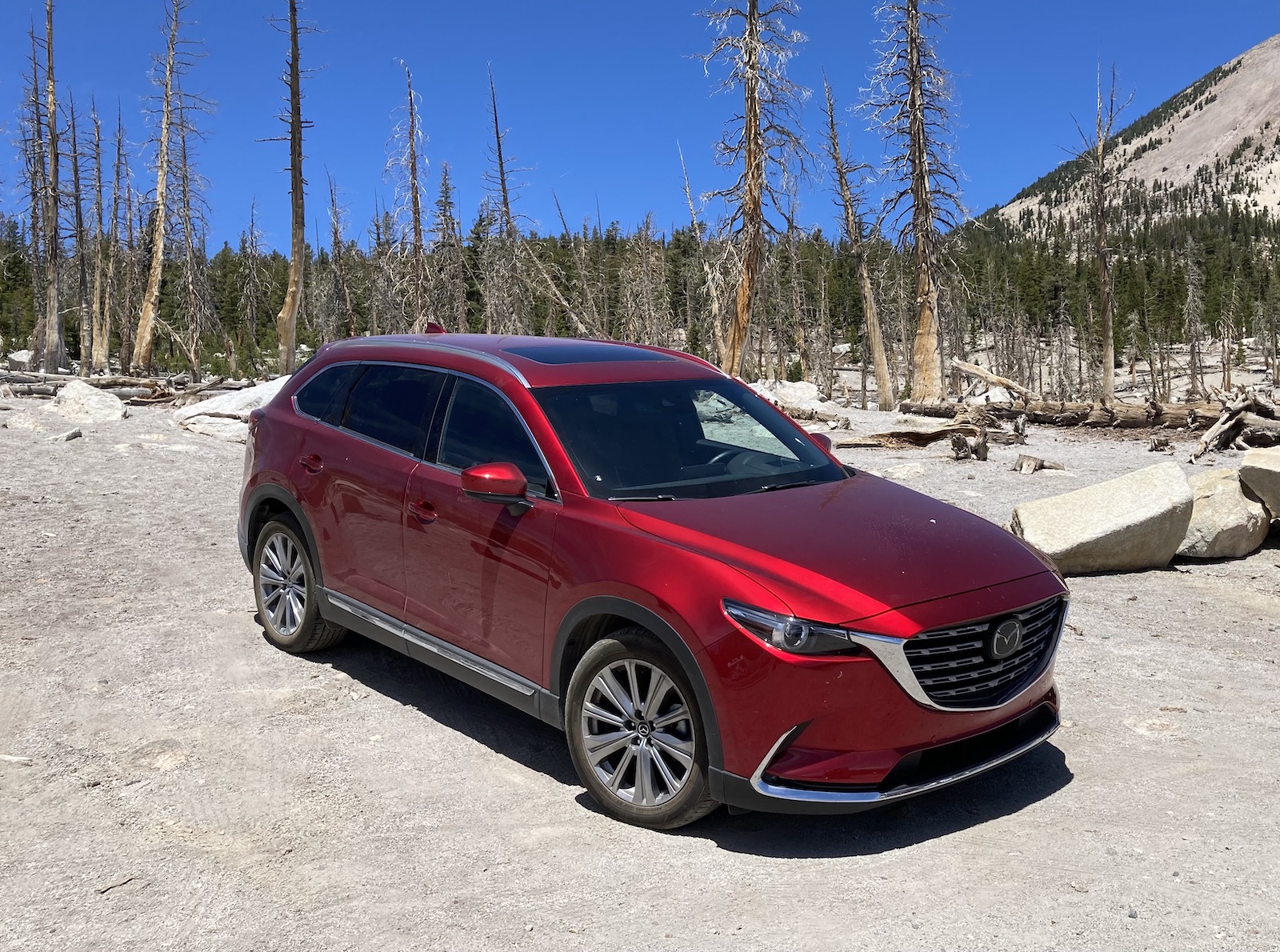 SANTA CLARITA, CA – There’s no better way to celebrate this nation’s independence – at least in my view – than taking a road trip. To be sure, when writing our Declaration of Independence the minivan or RV wouldn’t have been on Jefferson’s radar – there was no radar. But even then, the Colonies had a minimal road network and the horsepower to travel it. Our mobility today is an exponential expansion of that, given us the ability to cover relatively vast distances in a short period of time. My wife Tina and I covered what felt like a vast distance over July 4th in Mazda’s CX-9, driving in tandem with our daughter, son-in-law and two granddaughters. With 2.5 liters of turbocharged power in our top-of-the-line CX-9, we made the 4-hour drive from Santa Clarita to June Lake, California in just under 8 hours.

The CX-9 loan required more conversation – you know, the back-and-forth – than required by most loans. In the prep, knowing we might encounter some gravel roads in and around June Lake – which abuts both Mammoth and Yosemite National Park – I had requested Mazda’s all-new CX-50, which supplies a more all-road capability than the other Mazda crossovers. But given the newness of the CX-50 – and the high demand for it among journalists – that request generated a polite ‘no’. The default was Mazda’s always-popular CX-5, which would have worked until we realized that three rows might be better than two. The 3-row CX-9 was made available, and we were – at least figuratively – on our way.

I’ve liked the CX-9 since its inception, and there’s even more to like in this second generation. In my view, three rows are best if the third row is designed for the occasional use it invariably receives; if you regularly need to seat eight adults, buy a Suburban. And if most of your driving includes just three or four passengers, don’t force yourself to park or fuel 5,000 pounds or more of three-row SUV.

In its footprint the CX-9 maintains some proportionality, with its 199 inches of overall length planted on a wheelbase of 115 inches. With a curb weight of 4,400 pounds. CX-9 owners will enjoy 136 cubic feet of passenger volume, 71 cubic feet of cargo space behind the first row of seats, 38 cubic feet behind the second row and just over 14 cubic feet behind the third row. Obviously, if traveling with six you’ll need a Yakima or Thule box on top, and perhaps a small cargo trailer behind you. The towing limit is 3500 pounds, and while better than nothing, falls wells short of the towing numbers available from Kia or Hyundai.

In the walk-up you’ll enjoy a crisp, contemporary design. As noted on previous Mazda reviews, there’s little to alarm in its sheetmetal; its largely organic shape is moderately restrained. With its front overhang the CX-9 is obviously based on a front-wheel/all-wheel drive architecture, but the rear overhang is modest, making its lack of cargo space behind the third row completely predictable.

Once inside, our top-of-the-line Signature AWD doesn’t disappoint, except in a couple of critical areas. Without the jacked-up profile of some crossovers, the CX-9’s step-in is easy, but made awkward – at least for the driver and his/her front seat passenger – by the rake of the front windshield. Its aggressive angle makes ducking your head mandatory; or, failing that, a hard hat necessary. Once inside, everything is comfortable front and rear, although the third-row seats are limited to someone 5’8” – or smaller.

For the driver, visibility is good, the heads-up display on our Signature trim helpful, and the infotainment controls utterly confounding. Tina likes reading owner’s manuals and could not find the information she needed to tune the audio. In my most humble opinion, changing a station shouldn’t be more than a one-step process, and sure-as-h*ll shouldn’t require a manual. When you do the inevitable redesign, Mazda, I hope you give this aspect a rethink.

On the road between Santa Clarita and June Lake, Mammoth and Yosemite, we went from Santa Clarita’s elevation of 1,200 feet to areas around June Lake over 9,000 feet. And if you need an argument for turbo power, know that the CX-9’s turbocharged four, with 227 horsepower (using regular fuel) and 310 lb-ft of torque, never hesitated. In the climbs it’s responsive, and on the other side of those climbs the Mazda’s ride, handling and braking capabilities are reassuring.

The CX-9, however, is less comfortable on washboard gravel, which we experienced on an afternoon drive to the deserted mining town of Bodie, as well as roughly ten miles of ‘under construction’ in Yosemite. The CX-9’s structure is tight, but 20-inch wheels do you know favors in terms of ride quality and noise volume when running on the rough stuff. And regardless of what you’re on, assume stop-and-go driving to net you fuel economy in the high teens, while freeway and Interstates should deliver mid-20s.

With a window sticker on the Signature AWD model hovering around $50K, if buying I’d probably slide down the trim ladder to the Touring, which can be had with everything you need for this side of $40K. I believe the CX-9 to be a sweet spot in its segment and will hope more of you take notice. At some point I’d enjoy a clean, pre-owned example; that’s made easier if Mazda sells more new ones!