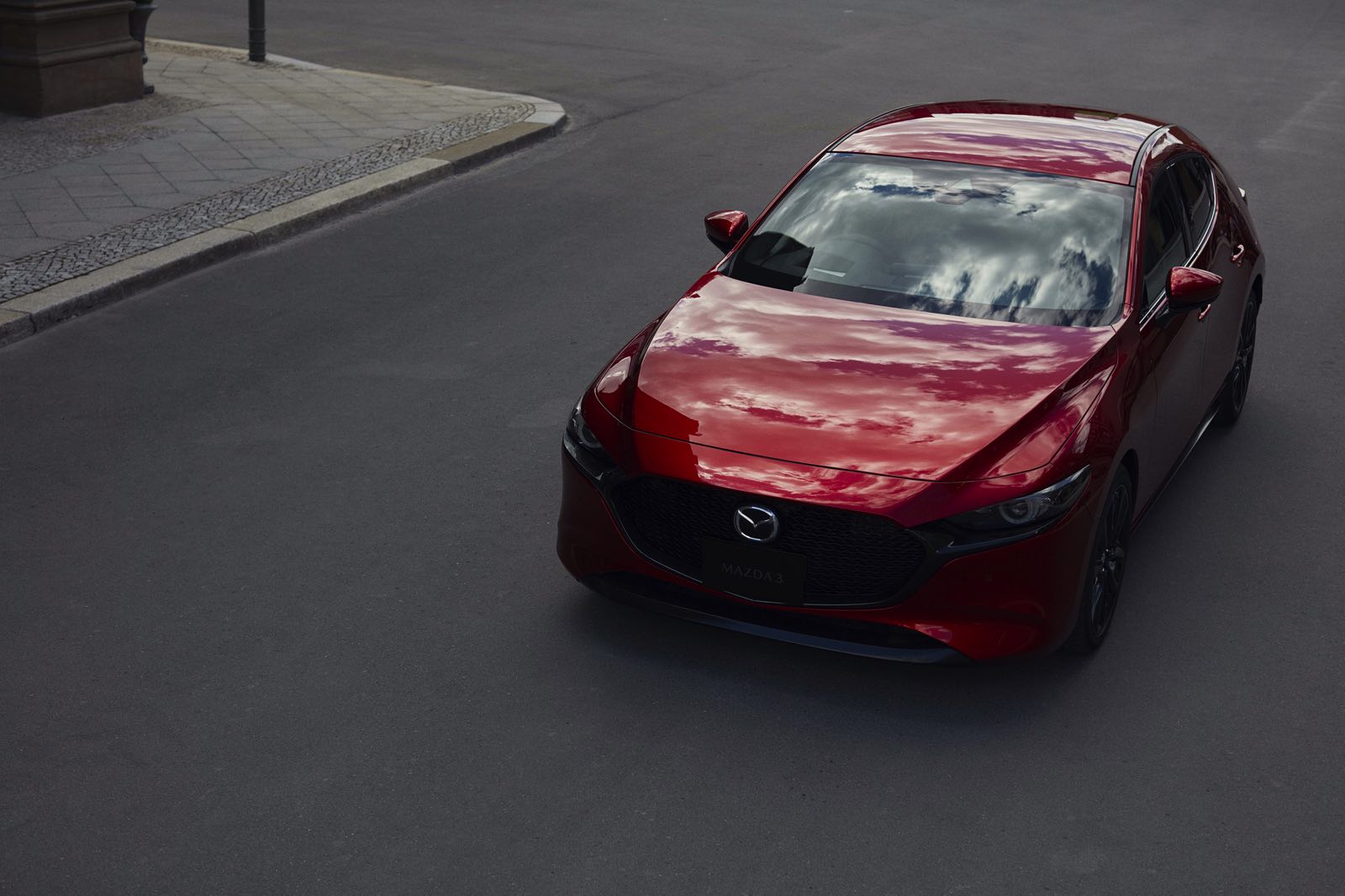 The MX-5 Miata is the consensus pick as the best little sports car on the planet. Long before Blonde Bride tamed my savage soul, I cut my teeth racing two-seaters and the Miata always was and always will be a favorite. Thus, I am happy to report the DNA of the teeny car with a giant heart lives in the Mazda3.

Available in both hatchback and sedan – the sedan is prettier, offers better visibility and more cargo volume –  the Mazda3 starts at $22,165 and stretches to $34,465 for a Turbo Premium Plus. It is a clear step above stalwarts like the Honda Civic, Toyota Corolla, Nissan Sentra, and VW Jetta because it is nicer, quieter, more refined, and more fun to drive.

At higher trim levels with optional all-wheel drive, the little Mazda is also an affordable and satisfactory competitor to performance or upscale-oriented rivals like the Hyundai Elantra N, Subaru WRX, Mercedes A-class, or BMW 2 series.

Like all Mazdas these days, the 3 sets itself apart by offering a near-luxury experience. Even the base model has a quiet, pleasing, and mature interior. Oh, one must move up to at least a mid-level Preferred ($26,115) to get the good seats, but even at the base level, one finds high-quality, soft-touch materials in the cabin. Rich, liberally padded surfaces and high-quality knobs and switchgear are found throughout.

Infotainment is managed through a control knob in the console. It took us an afternoon to get accustomed to it, but then things became instinctual.

Attention to detail is also found in the management of noise, vibration, and harshness. Wind and road noises are damped as well as cars costing $10,000 more. Engine and exhaust noise are pleasingly managed, and the drivetrain feels smooth and refined.

First rolled out in 2003, the Mazda3 quickly established a name for being fun to drive while offering superb fuel economy. The latest version still delivers decent fuel economy but is a step behind the class when it needs to be ahead (bad timing, Mazda).

Purists rage because a standard transmission is not available, but you will find no complaint here. No one buys a stick these days and a gear selector with a dash display makes it easy to match gears to road situations for engine braking and torque.

Where I find fault is that Mazda has not joined the herd in developing an 8- or 10-speed automatic. More gears and a higher top gear would allow the Mazda3 to deliver more competitive fuel economy.

Mazda offers three different four-cylinder engines with the 3, starting with a 2.0-liter four-cylinder on the base sedan. It delivers an EPA-estimated 28 city and 36 highway mpg. It makes 155 horsepower and comes only with front-wheel drive.

Our tester came with AWD and a turbocharged 2.5-liter that puts out 250 hp, 320 lb.-ft. of torque. It delivers 23 mpg in town, and 32 on the highway. That used to be quite good, but with small hybrids now delivering more than 50 mpg, plug-in hybrids topping 100 mpg, and gas as expensive as bottled water at a music festival, 20-30 mpg on a compact car sucks.

Over the years, the Mazda3 earned a reputation for reliability. The current model also seems to be strong. I say “seems to,” because car reviewers have zero access to manufacturers’ quality control data.

Mechanically, the car feels solid and tight; however, the latest iteration, introduced in 2019 as a 2020 model, seems to be plagued by the sort of quality-control failures endemic in the auto industry these days. Mazda has issued seven recalls for a host of relatively minor issues, none as serious as the spontaneous combustion seen in vehicles built in Korea or Dearborn.

The 3 is a class leader in safety. Both major rating services give it their highest possible crash-test scores. For an economy car, the number of standard driver-assist features is exceptional. On the other hand, we were surprised – because Mazda usually does things so well – to see they do not work all that well.

The Lane-Keep Assist, for example, does not keep the car centered in its lane. Instead, it lurches from side marker to side marker, until the angle of approach becomes too acute, and it leaves its lane.

Similarly, the dynamic cruise control is supposed to be stop-and-go. In traffic, however, we found the stop function to be uncertain, prompting us to intervene, and the resume speed to be lethargic, also causing us to intervene.

Perhaps the lesson is that the Mazda3 is designed for always engaged drivers.

We found the LED headlamps to be mediocre on dim. On the other hand, the bright lights are well above average and are automatically actuated when there is no oncoming traffic. We made this discovery while testing the car at a speed that may have exceeded the posted limit at night on a lonesome and winding road.

Different reviewers offer differing opinions on the car’s handling. All agree it is quite good, but some say it is not as good as prior models. We loved the earlier models, but we also loved this one.

With all-wheel drive, we found the car to be balanced and linearly responsive, even at speed through a series of tight turns. Body lean is slight, and the overarching impression is that Mazda excelled at dialing in the balance between handling and ride. The car is crisp and nimble and pleasingly compliant over road imperfections, especially for a sedan weighing less than 3,000 lbs.

There was a slight amount of plow (understeer) in corners, which is typical, but a slight lifting of the pedal promptly adjusted the cornering line, which is not.

We also noted turbo lag on acceleration. Zero to 60 comes fast, in less than 6 seconds. The lag is evident when cornering, which is a shame. Because the Mazda3 is so light and balanced, down-track, the exit acceleration point, comes early. Rather than accelerating through the curve, one is forced to free-wheel for a few moments until the throttle comes alive.

Still, this is nit at which I pick. This car begs to go out and play, an entreaty we gladly indulged.

Bottom line: This car is likely to retain value better than most and will be rewarding to own and drive. And that’s the point, isn’t it?