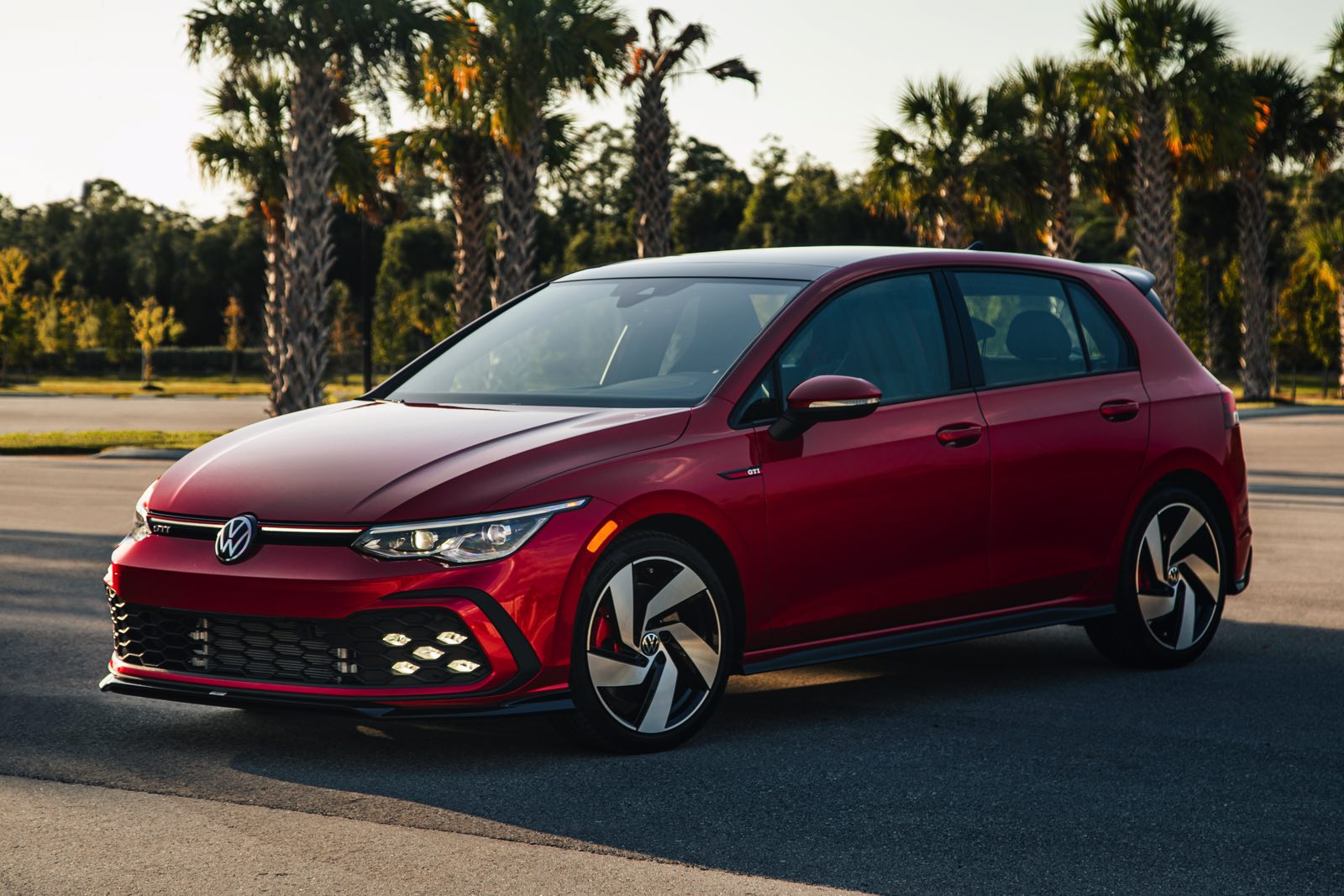 A Feeling of Warmth, Friendliness and Good Cheer

From the manufacturer: In its eighth generation, the 2022 Volkswagen Golf GTI offers more power and driving sophistication than ever before. To bring the car to life, Volkswagen designers took on a major challenge—how to create a new look that conveyed the updated performance of the new GTI, without breaking the historic links dating back to the first hot hatch models.

Yup. We are in the eighth generation of VW’s iconic performance hatch. And in those eight generations Volkswagen has consistently delivered a level of accessible performance to one of the widest demographics in the automotive sphere. I clearly remember when the first Golf GTI appeared on Central Volkswagen’s showroom in Richardson. As the past owner of a ’79 Scirocco, which begat an ’81 320i and – not much later – BMW’s 528i, the GTI seemed perfect for our family of three, with only tentative plans to become a family of four. (That would happen in 1983.)

The GTI impressed – then and now – as both so rational and so proportional, in everything but its outsized fun. And that fun continued throughout all the redesigns, as none of those revamps would dismiss what drove the car’s appeal in the first place. Park all eight side-by-side at a car show and the lineage is evident, its mission blatantly obvious. This is a car that anyone can buy and everyone can enjoy. Yup – eight generations later.

The eighth gen arrived for the 2022 model year, and while all-new in both its design and engineering, you’d be forgiven if the redesign strikes you as subtle. My point of reference is the front fascia, which looks slightly overwrought relative to its immediate predecessor. Klaus Zyclora, who now heads Volkswagen Group Design and oversaw the newest model’s development, indicates that the design team “wanted to show that the GTI in its eighth generation has made a huge leap forward in performance.”

That’s not as clearly evident as Mr. Zyclora’s testimonial would imply, but parked next to the previous model and those changes more easily come into focus. That’s especially true at the rear, where the car’s shoulders are broadened and the GTI lettering is front and center (rear and center?) on the hatch. The lettering ain’t subtle, but then, neither is it a bird on the hood.

The more dramatic differentiation is inside, where the tech geeks have apparently overtaken the design asylum. The press material dubs it a ‘future-forward’ cockpit, and we’ll guess it is. Gone are any remnants of the GTI’s analog past, and in its place is a digital dash, a choice of two infotainment screens (depending on trim level) and an audio system that required yours truly to open the owner’s handbook. Seriously. Once – of course – you become accustomed to the drill it’s less of a drill, but as I’ve written before, I wish product planners gave you a choice between the last century’s familiarity and this century’s abject mystery (or is it misery?).

Our test SE falls in the middle of a three-model lineup, above the $30K S and beneath the almost-$40K Autobahn. The SE spec gives you adaptive cruise control, active blind spot monitor, rear traffic alert, front assist and lane assist; in short, if you don’t pay attention this would be the GTI for you. It also gives you a sunroof, keyless access with push button start, and that 10-inch touchscreen. But to get a dynamic advantage over the base S you need to head to the Autobahn, where your $40K gets you DCC adaptive chassis control, along with oh-so-slippery leather!

Beneath the hood, the GTI’s 241 hp (at 6,500 rpm!) is joined by 273 lb-ft of torque at a just-off-idle 1,600 rpm. Connected in our test vehicle to the available 7-speed DSG auto (a 6-speed manual remains standard), the GTI delivers its capability – according to Car and Driver, 0-60 in 5.1 seconds – in almost time-release form. It really doesn’t feel fast, especially if you haven’t dialed up the ‘Sport’ mode, until it does. And even then, it’s not ‘Katy Bar the Door’; you dial up the speed as an adult and not – notably – as an adolescent.

In sum, this new GTI improves on a well-established formula in all of the dynamic ways we typically measure performance. But if given the chance to buy a clean Mk7, that’s probably the trigger I’d pull. Or a clean Golf R, an even bigger, better trigger…