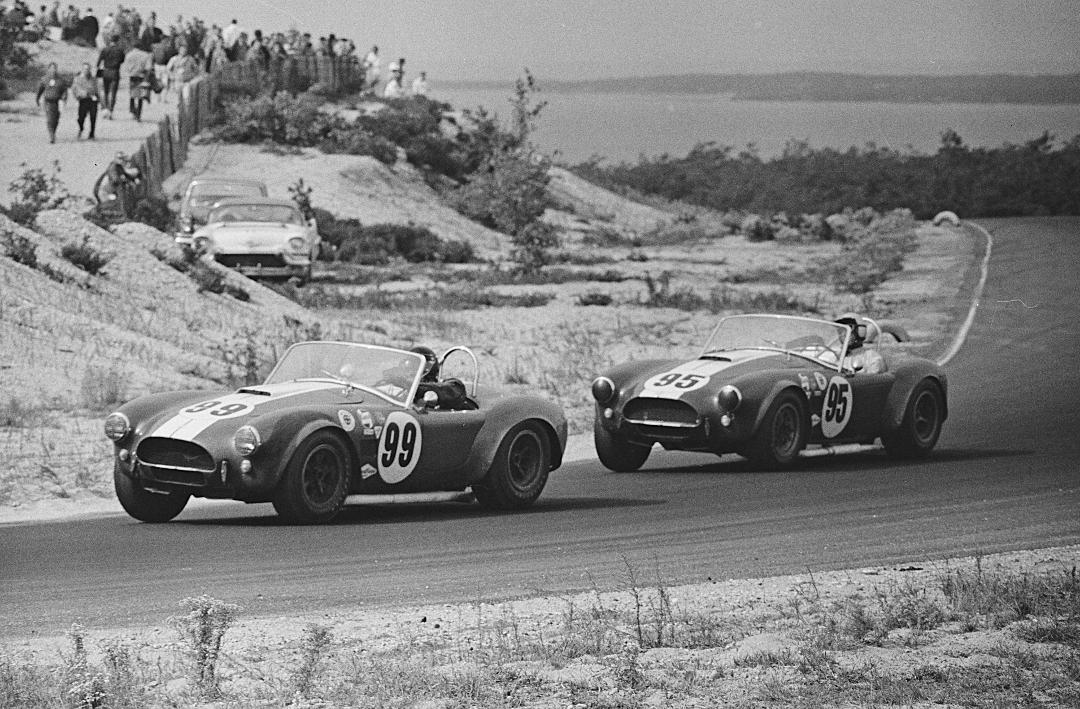 Carroll Shelby, whose biography should be subdivided into four separate (chicken farmer, driver, car builder and team owner) treatments, is arguably THE sports icon from Texas, a state – and State of Mind – filled with sports icons. Of course, Shelby’s successes weren’t achieved, nor his legend created, on any real estate in or around North Texas. But the journey began just east of there, and Shelby’s first not-so-tentative steps at the wheel of a racecar were built upon the dust-covered dreams of a man with little but dirt, sweat and an uncanny ability to sell anything – including himself – at what we euphemistically call ‘over sticker’. Those abilities are nicely detailed by author Preston Lerner in SHELBY AMERICAN – The Renegades Who Built the Cars, Won the Races, and Lived the Legend. And if you can get past the longish subtitle, you’re in for a wonderful read.

Although the number of Shelby profiles doesn’t quite match the volume of those documenting Abraham Lincoln (or – more recently – Donald Trump), Carroll Shelby, his cars and the competition history remain a popular target, in large part due to the longevity of his career and variety of that product. Mr. Lerner’s focus is on the heart of the legend; the book begins with the birthing of the Cobra in 1962, and ends with Shelby’s departure from both building cars (Ford took over production of the Shelby GT350 and GT500 in 1968 – and production of the 427 Cobra had ended in 1967) and fielding teams by the end of that decade. In confining his coverage largely to the ‘60s, SHELBY AMERICAN digs into the meat of the matter, and includes those countless personalities involved in both Shelby’s many successes and, equally insightful, Shelby American’s occasional missteps.

Given Preston’s background in reporting on motorsports for both Automobile and Road and Track, it’s no surprise that his research for SHELBY AMERICAN zeroed in on the competition. That coverage includes the usual suspects, detailing the wins (and losses) with Ford at Le Mans, as well as lesser-known outings in Trans Am and at Indianapolis. And within the book’s 300 pages is Mr. Lerner’s authoritative (albeit accessible) style, mixed with the occasional wit of both his subject and – of course – Preston himself. The book supplies a great read, especially if your Shelby is taking its winter break.

Preston Lerner’s SHELBY AMERICAN is published by Austin’s Octane Press. More info can be found at the publisher’s website, OctanePress.com.

I’ve not been a regular reader of Hot Rod, given that much of it’s subject matter – the building of hot rods – always seemed to require too much actual work. But I’ve always given the magazine’s covers a glance, and when lingering over its contents I was inevitably amazed by the depth of its coverage and the creativity found in its subject matter. The hot rod wasn’t – and isn’t – confined to these United States, but its popularity after World War II was a singularly American development, and Hot Rod magazine’s birth could not have happened anywhere else at that specific time. Robert E. Petersen saw an opportunity and ran – at speeds well north of 100 – with it.

On the occasion of Hot Rod’s 75th anniversary, author Drew Hardin digs into the magazine’s archives and gives it as much ‘go’ as the 200 pages of HOT ROD MAGAZINE  – 75 YEARS will allow. Divided by the nine decades in which Hot Rod’s writers and photographers have been chronicling the hot rod scene, the book is as expansive as its subject matter, beginning with its coverage of the competition on Southern California’s dry lakes and SoCal customs, while including subjects as varied as land speed records and Bruce Meyers’ Manx. As you’d hope, there’s more here than just the machinery; there’s also ample coverage of the men behind the machines, including the usual suspects: Don Garlits, TV Tommy Ivo, Smokey Yunick and Chip Foose. My only nit is the pic of Miss Hurst Golden Shifter, Linda Vaughn – it’s too small.

Beyond hot rods and customs, of course, are the new cars and their occasional ‘out there’ juxtaposition. Best case in point: Hot Rod’s September, 2012 issue, where editors paired a Lamborghini Aventador with a Model A rat rod. While readers turned the page, Ferruccio Lamborghini (presumably) turned over in his grave.

The magazine – as an entity – was one thing in the ‘40s and ‘50s, and something entirely different in the 2020’s. You’ll still find Hot Rod on the newsstand (should you look for it), and – of course – online. As with most print mags sharing their corporate mission with the Internet, writing styles now incorporate search engine optimization, no longer digging into horsepower so much as collecting clicks. But the magazine’s source material seems as healthy as ever – and we’ll hope the magazine remains healthy, also.

HOT ROD MAGAZINE  – 75 YEARS is available through Quarto Publishing, and a review copy was provided by the publisher.