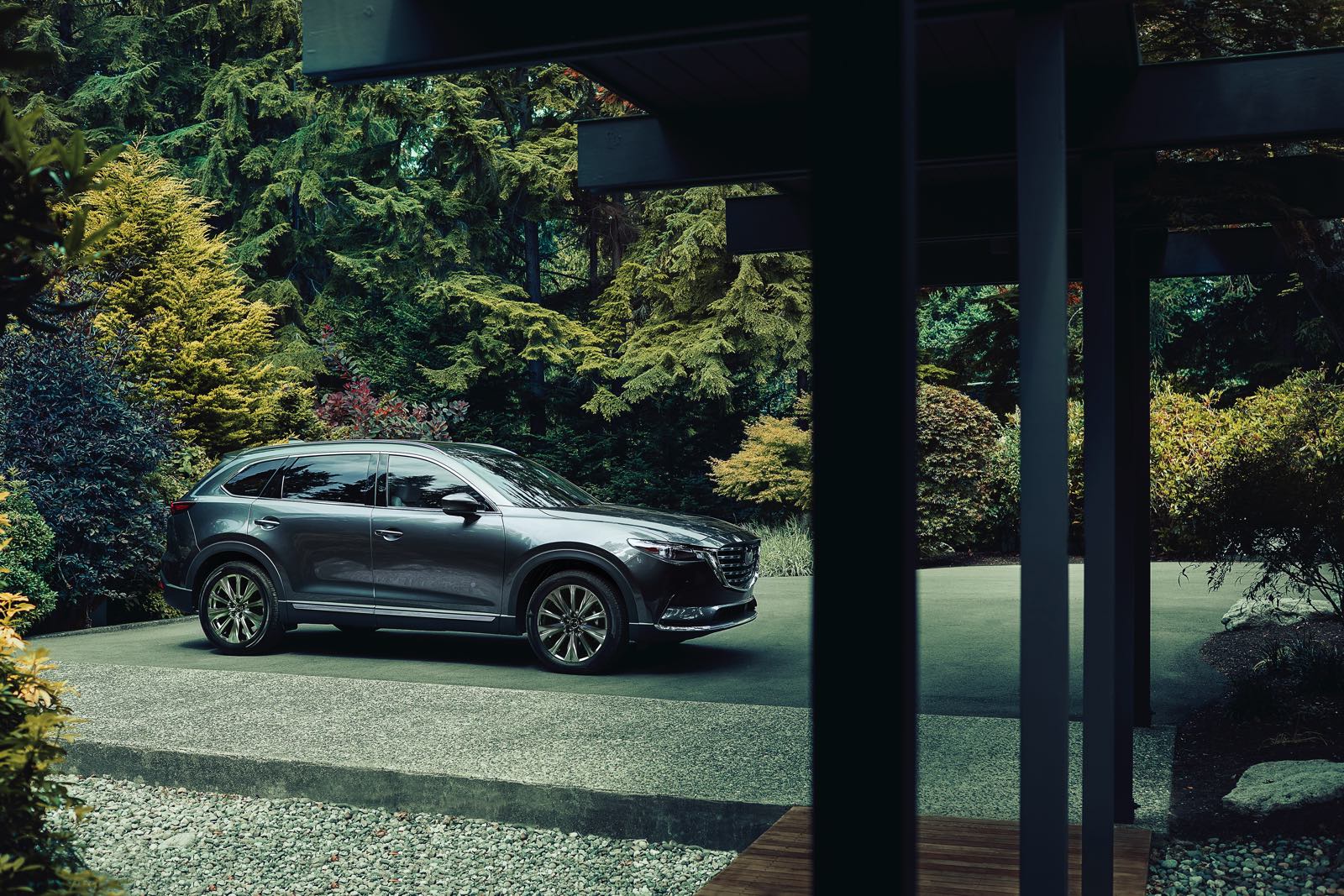 Agile, handsome, and with a premium interior, the 2022 Mazda CX-9 is the perfect three-row family hauler for those of us who delayed adulthood so we could fling sports cars around winding tracks.

Well, perfect if your family is small or has left the nest. In a world of boxy, cookie-cutter SUVs, the CX-9 draws its rakish good looks from a stylish sloping roofline that shrinks the rear two-thirds of the cabin.

Seats flat, the CX-9 has but 71 ft3 of cargo space, which is more than ample for a warehouse store run but small in a class in which the 81 ft3of the Ford Explorer and 80 ft3 of the Kia Telluride are near the median. The class leading Chevrolet Traverse has the largest rear volume at 98 ft3.

The roofline also limits visibility, which would be an issue if blind-spot monitoring were not included in the impressive list of driver-assist safety features that come standard. Automatic emergency braking, adaptive cruise control, and a nicely dialed-in lane-keep assist system are also standard.

Those are the only two drawbacks found in nearly all reviews of the CX-9. Ride, handling, interior comfort, and management of noise, vibration and harshness are all a cut above. For a few years, Mazda has been repositioning itself as a premium, near-luxury brand, and that is apparent the moment one opens the door and sits down.

The current CX-9 first rolled out of factories in 2015, and some of the switchgear and the infotainment interface are a little out of date, but it’s all easy to figure out. More importantly, from contrast stitching to panel alignments, the cabin is marked by a high degree of craftsmanship.

This is a car that will wear well over the years.

The ride is comfortable and relaxed. Even through turns, the CX-9 exhibits little body lean – unusual for the segment – and the suspension gently swallows road imperfections.

To add to the value proposition, this is not a car on which dealers are slapping big markups; indeed, Mazda is offering $500 cashback and 2.9% financing.

The amazing part of this car is it stays true to Mazda’s driver-centric philosophy. It doesn’t drive like an SUV at all.

Though it comes equipped with a turbocharged 2.5-L four, when competitors invariably deploy six-cylinder powerplants, the CX-9’s 227-hp engine is torquey and accelerates as if it were swaddled in silk sheets. Sixty mph comes in less than eight seconds and highway acceleration is rather exhilarating.

In curves, the CX-9 stays nicely planted and provides a sense of control and precision. It holds its line nicely, a mark of superior chassis design. The steering response is quick and linear. Braking is above average.

In assessing the driveline, we must bear in mind that the CX-9 was engineered a decade ago, a lifetime in today’s auto industry. These days, technological innovations are coming fast and with increasing frequency.

Research and development of electrified vehicles has only gained a full head of steam in the past five years. Its wide-scale adoption is probably three or four years away and the conventional wisdom this week is that by 2030, 75% of the cars produced on the planet will have some sort of electrical propulsion.

When Mazda decided to go with the four-cylinder engine in this vehicle, it did so in hope of posting better fuel economy ratings than the competition. It did. The 2022 model, which only comes with all-wheel drive, gets an EPA-estimated 20 mpg in town, 26 on the highway, for a combined 21 mpg. That’s 1-2 mpg better than the class average.

Sounds good, right? Yeah, but, as of this year, the Highlander only comes as a hybrid that gets 36 mpg. Mazda could more than double that if it chose to put in the plug-in hybrid system it is selling to great effect in its European CX-60. It also has a highly successful all-electric vehicle, the MX-30 EV crossover that delivers the equivalent of 98 mpg.

What I’m trying to say here is that, in five to seven years, 21 mpg will sound primitive. How that will affect resale value I can’t say.

Ready to roll out of factories right now is the next addition to the Mazda lineup, the CX-90. The grapevine says it will be larger and powered by an inline 6. There is a ton of speculation that it may have a hybrid (HEV) or a plug-in hybrid (PHEV) – which can deliver 30-60 all-electric miles before switching to gas/electric power – but Mazda is mum on those points. As of this writing, Mazda’s media site does not contain a single reference to the vehicle.

Unless you must transport the whole soccer team, this is a wonderful vehicle to own and drive.