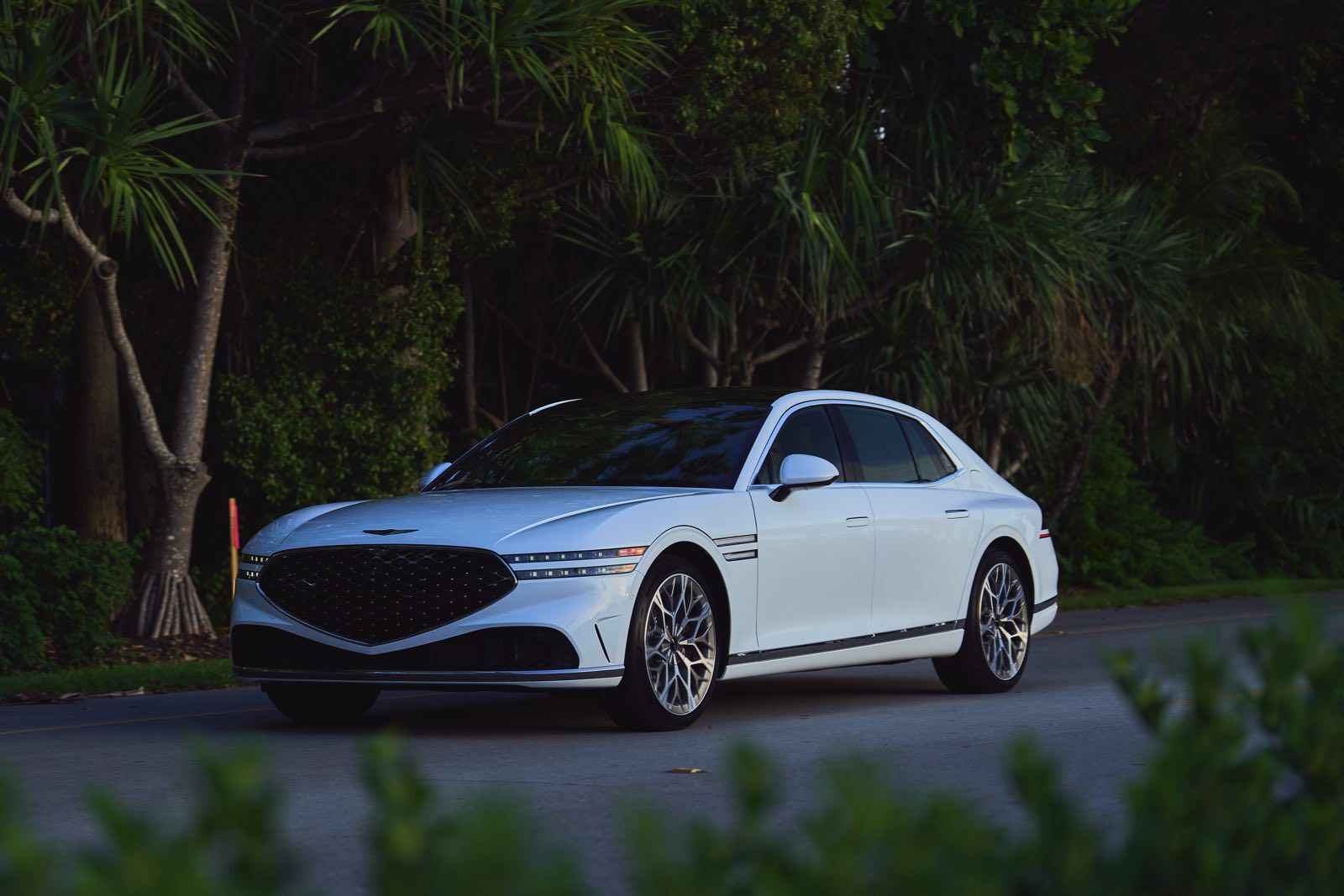 For the longest time, the little I knew about import luxury was from the pages of Ralph Stein’s The Great Cars. Stein’s book, published in 1967, took its readers through some of the prominent names in automotive history – Alfa Romeo, Aston Martin and Bugatti through Rolls-Royce and Vauxhall – with both his compelling narrative and jaw-dropping photos. My first behind-the-wheel exposure wasn’t until the late ‘70s, while working as a sales assistant at Classic BMW in Dallas. There, the BMW 7-Series was relatively new, and I was given the chance to provide demo drives to those in Dallas considering an alternative to Cadillac, Jag-u-ar or Mercedes. Some 40+ years later both Benz and BMW are hell-bent on electrification,  and it’s left to Korea’s Genesis to combine performance, luxury, efficiency  and – not incidentally – value in its biggest luxury sedan, the all-new G90.

As you’ll probably know, Genesis is a manifestation of Hyundai, first appearing at the upscale end of that brand before splitting into its own luxury offering. Its launch as a separate entity was hampered by a stutter-step rollout and (ya’ gotta’ think) two years of a pandemic. But rolling into 2022 the team leading Genesis seems to have found their corporate mojo, with a lineup now incorporating three sedans (G70, G80 and this week’s subject, the G90), two crossovers (GV70 and GV80) and one all-electric. Several have snared industry awards since their debuts, and at least one – the G90 – might just reenergize its segment.

While the G90, serving as the biggest, most luxurious Genesis, might put new energy in a category surrendering to its SUV-based brethren (Continental, anyone?), it doesn’t reinvent the segment.  Sitting on a wheelbase of 125 inches, and boasting an overall length of almost 208 inches, the G90 seems to successfully straddle that divide between nimble and substantial; it ain’t a GTI (or Hyundai’s Kona) but neither is it an Escalade. And in veering into a completely subjective space, this new G90 is drop-dead gorgeous.

With a familial resemblance to the growing Genesis showroom (even when there’s not a showroom…), the G90 appears large – but not overly large – and is draped in an absolutely sensuous shape. While I’ll still argue against its exaggerated grille opening, the balance of the G90 is, well…balanced. Sitting on its 21-inch wheelset, the G90 is rearward-biased, something Audi’s A8 isn’t. And while, unlike the supercars of today, the G90 doesn’t look like 200 miles per hour when parked, it does look like 100 miles per hour – and would be fully deserving of a spot at your local Cars and Coffee.

Inside, an almost Germanic conservatism is softened by what seems like an Italian take on leather and appointments. Leather covers the seats and door panels, and that leather is both perforated and quilted; hell, it might even be pasteurized. Adding to the sumptuous vibe is an upper instrument panel in leatherette, while the headliner and roof pillars are covered in microfiber suede. The infotainment screen is adequately large, but not so big as to feel or look overwhelming. And controls for ventilation and audio remain (relatively) intuitive. You’ll get this, although your 20-something driver will probably get it faster.

If there’s a ‘closer’ in the G90 portfolio, it’s undoubtedly the spa-like rear seat. Once inside, via its power door mechanism, the owner/passenger offers you power reclining and massage. And unlike most massages referenced in today’s news, the Genesis feature doesn’t come with civil litigation or criminal penalties beyond, of course, the $100K entry fee.

Under the G90’s hood is one of the better reasons to delay your switch to an EV. Its 3.5 liter V6 employing twin turbochargers is supplemented by a 48V e-Supercharger to produce 409 horsepower and 405 lb-ft of torque; that torque flatlines between 1300 and 4500 rpm, so it’s essentially there from just above idle to your inevitable conversation with the arresting officer. Car and Driver recorded a 0-60 of just over five seconds, and while you’ll still not keep up with a Tesla Plaid, neither will you be searching for a charging station. On errands with few stops at between 50 and 60 miles per hour, the G90’s dash computer showed a consistent average of 25 miles per gallon, about what my son gets in his 10-year old Subaru.

For those with a six-figure budget, the G90 is an eminently safe investment to make. If I was on a Genesis showroom I’d think the smaller G80 – at an investment of around $70K – would probably check the necessary boxes for me, but then, ‘me’ isn’t ‘you’. And in an environment where Cadillac gets $100K for its Tahoe-based Escalade, the G90 makes great sense – and ‘cents’.