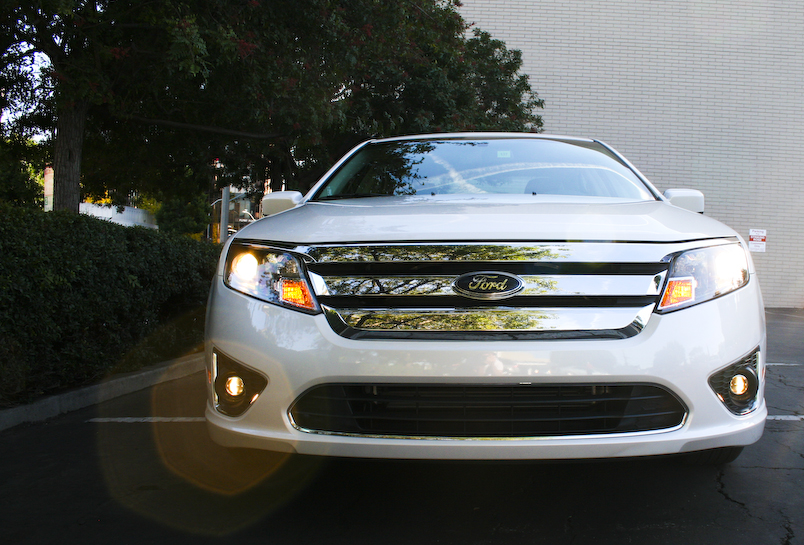 Review and Road Test of the 2010 Ford Fusion

When the Ford Fusion came out I wasn’t too impressed with the looks, after seeing the European Ford Mondeo just about all Fords look bland. It wasn’t until after I jumped into the V6 packing Fusion that I was impressed. The feel and looks of the interior, even back in 2005, when the Fusion first hit the streets was great! I have been a fan of the Fusion since the first time I got to take a drive in one. So when I heard about the styling change and upgrade in the 2010 model I was excited to see what they would come up with.

First let’s look at the styling. Frankly I love it! Some people think the new “3 bar grill” design is too much, but I like the aggressive look and the way they made the headlights mach up with the grill it just beefs up the front end. I was never a big fan of the old headlights but they did a fantastic job integrating these new lights with the front end.  The open mouth and more European front help the car look more elegant while still looking like an American machine.  Another redesigned area of the car that I was happy with was the rear. The new tail lights round out the design well. Wrapping up the European look in the back is the rear diffuser, looking sporty but not being too big for a normal family car.

Where Ford really out did themselves is in the interior in this car. I told you how great the interior was in the 2005 model, well just know that the 2010 is ten times better. The material used for the door trim and the dash, the softness of the steering wheel, and the comfort of the seats just add to an all around better car. The standard Ford SYNC system has one-upped brands like BMW and Lexus giving you functionality they are now trying to copy.

On to the engines, the Fusion has a 2.5L four-cylinder with an all new six-speed automatic gear box producing 171hp and 171lb-ft of torque and rated at 23/34mpg. This base engine is quite good in power and in MPG, but the top of the line Sport edition will be packing a 3.5L V6 also matted to a six-speed automatic gear box. With the V6 you get a plentiful 263hp and 249lb-ft torque while still maintaining good MPG. We should also expect to see a Fusion GT with the NEW 3.5L Eco-Boost V6 (which is so amazing I could write a whole article about just that engine) producing about 340hp. My recommendation to Ford if they decide to produce the GT would be to make sure the suspension and front tires can take that horsepower being a front wheel drive car.

The biggest fuss with the new 2010 Fusion is the new Hybrid model.  With the hybrid Fusion you get a gasoline-electric hybrid system that easily cranks out 41MPG averages. Again Ford is leading in the technology department with others struggling to produce such a useful vehicle with such good gas mileage and still keep it at an affordable price.

If you know me you know I like fast cars with rear wheel drive and a nice manual transmission, but for an everyday family sedan this has to be one of my favorite cars out there. The refinement and technology put into this car by Ford is a step above the rest at its price range, and it’s always good to be in a Great American car.

Chrysler… Fiat… and the 500…
Event Calendar