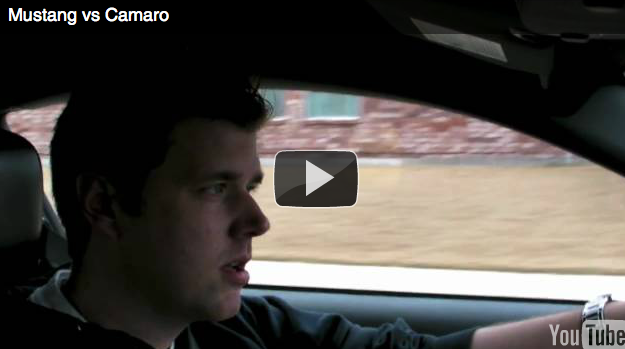 Some wars have been waging since the dawn of society with race vs. race, religion vs. religion, king vs. king. Other battles that are more short-lived but still remembered to this day like the Battle of the Alamo or the Battle of Waterloo. We just stumbled into such a battle that’s been waging on the streets for almost 50 years now. There has always been that epic battle between the Camaro and the Mustang spanning back to the late 60’s and revived today. This week at txGarage we were able to get a hold of a 2010 Camaro 2SS and a 2010 Mustang GT Premium, what else is there to do but race!

The Camaro was brought back for the 2010 model year after being killed off in 2002. When redesigning the Camaro GM was going for the “retro” look to compete with the styling of the Mustang introduced in 2005. You just can’t beat the looks and styling of the new Camaro, it’s really one of the best looking “retro” interpretations out today. The car is low and wide, with great proportions and menacing looks. The interior is all modern with some retro looking gauges. Sliding into our test Camaro, your bathed in black and inferno orange, ambient lighting, accent stitching, and a plethora of buttons and knobs. The best part of the Camaro’s interior is the steering wheel, it is fat and has good hand placement and also has easy to uses and access controls. The biggest gripe I have with the interior is the huge plastic panel on the doors that swoop around the dash. In my opinion, for a $36,000 car they could have easily wrapped that in leather and it would have made ten-times the difference. We were also equipped with the best CB radios in the market, including the Boston Acoustic premium nine-speaker audio system loaded with all the acronyms of the audio industry. – AM/FM, CD, AUX Input, USB port, Sirius XM Radio – The leather sport bucket seats were comfortable, 6-way power adjustable, and could heat your rear if the horsepower doesn’t already have you sweating.

The 2010 Camaro SS is armed with the LS3 6.2 liter V8 engine with SFI (Sequential Fuel Injection) and bolted to a 6-speed manual transmission. This combination gives you an instigating 426 horsepower and 420 lbs-ft of torque with a reasonable 16 MPG city and 24 MPG highway. You won’t have time to worry about your fuel economy though when you’re going from a standstill to 60 mph in only 4.6 seconds and cursing down the highway, the difference between 60 mph and 80 mph is a twitch of your big toe. To stop this 3,849 pound Camaro they equipped it with Brembo performance brakes with discs at all four wheels. The Camaro also comes with performance suspension, but to us it never really felt sporty just rough. To put the power down our test car was furnished with 20″X 8″ front wheels and 20″X 9″ rear wheels wrapped in Pirelli P-Zero tires.

After digesting it all I’d have to say that the Camaro SS is far above what the Camaros of the past have been, and we are forever enamored by the looks of the exterior and interior of this 2010 Camaro. It did take me a day to get used to the Camaro’s clutch, I would like it to be heavier and release lower, and the shifter could have felt more mechanical but that’s a personal preference of mine. In the end the biggest problem with the new Camaro remains to be the Mustang.

In 2010 the Mustang received two major changes that were desperately needed; most importantly of the two was the interior. The materials used and the looks of the inside of the Mustang has been a neglected afterthought for decades, so when we heard that the interior quality was going to be the main focus of the 2010 Mustang we forgave Ford for leaving the 4.6 liter engine that’s just as old. Our test car was a Grabber Blue GT Premium and the updated interior featured black leather trimmed sport seats with exposed blue stitching and a blue racing stripe down the center of the seat. The materials used in this car are on par with most Ford vehicles of today but are miles above the older Mustangs. Leather wrapped steering wheel, aluminum gear shifter, along with soft touch materials ensure that your touch points in the car are all pleasurable to the hands. This car also featured the Shaker 500 audio system and SYNC voice activated system with the usual SYNC goodies.

The second thing refreshed in the 2010 Mustang is the exterior. Although the dimensions of the car are mostly unchanged the looks are dramatically different, to Mustang enthusiast. It really looks like they stretched the skin of the Mustang over its muscle to expose the power and give it a more athletic stance. I love the rear end, which seems to be the hated segment from most Mustang enthusiast I’ve talked to, with the sequential tail lamps. I also love the new “Power Dome” hood; I think it looks much more muscular than the “fake” ram air hoods. The engine is the tired old 4.6 liter 3V OHC V8 tuned to the max with 315 horsepower and 325 lbs-ft of torque. Although it’s the same old engine, the 4.6 is a great, bullet proof engine that has served Ford well for years, and you still get good power for the 3,550 pounds the Mustang weighs in at. You also still get the five-speed -manual in our case- transmission with great mechanical shifting and an easy good feeling clutch peddle. Of course it has already been announce that the 2011 Mustangs will hallmark a new 5.0 engine with all the newest power and fuel saving technology. Look for that to push over 400 horsepower.

Back to the Battle:

Although they are both modern day muscle cars aimed at the same target audience, the Mustang vs. Camaro comes down to personality and preference. The looks of the Camaro are amazing and will turn more heads right now than most cars on the road, but the Mustang is not repulsive to the eyes by any measure. The Camaro is a fast beast that can burn rubber with the best of them, but the Mustang with 100 less horsepower has less weight and can match the Camaro in any situation. The interior of both cars are modern and comfortable. So which to choose? We liked the Mustang over the Camaro for the driving experience it offered. The shifter and clutch, steering and suspension, and engine and exhaust note won us over in the Mustang. It should still go without saying, though, that the Camaro is a great car and if we didn’t have the Mustang sitting in the driveway we would have been just as happy thrashing it around Texas.