We had a few hints before the Texas Auto Roundup this year about some cars that would be there, and we were told to be excited. I was excited as I always am when I have the chance to drive several different cars a day and around at track. As excited as I was thinking about the new cars we might get to drive, nothing came close to my excitement when we all found out that the 2013 Nissan GTR would be available for us to hoon.

Obviously, in an event like this, the most desirable cars are crowded and hard to get your hands on when the time comes. Many people were excited to drive this GTR. I watched and waited as I test drove many other cars available. Finally, right after our lunch break, it was time for me to make my move.

I went over and had a quick chat with the Nissan representative that was there accompanying the GTR. I quickly slipped into the car and got the keys, then spent some time messing with the interior bits. When it was time to get back out on the track, I was ready.

I reached over and hit the red push-button starter and heard the 3.8-liter twin-turbocharged V6 engine come to life. That powerplant, though not exact because every engine is built by hand and a little different, has 545 horsepower and 463 lb-ft of torque. There’s a nice sound coming from the huge exhaust tips coming out of the rear of the car and with just a blip of the throttle, it’s a noise enough to send chills up your spine. Hooked up to this engine is a dual clutch 6-speed transmission with three modes.

It’s time to pull out, so I reach over and pull the shifter down into drive and rest my hands back on the perfectly crafted, performance oriented steering wheel. Right behind where your hands rest, you have paddles for shifting through the 6 gears. These paddles are some of the nicest I’ve felt in cars I’ve driven with paddle shifters. I pull out of the parking lot and head right over to the infield track.

So far so good. There’s no big drama in moving this Japanese supercar around. It actually feels as comfortable and easy to drive as any other car, so my senses are just not ready for what’s about to come. I pull up to the starting line coming out of the pit area onto the track. I take the time to switch the GTR into R-Mode, which gives maximum performance and the quickest shifts. I get the green light and plant my foot flat to the floor. 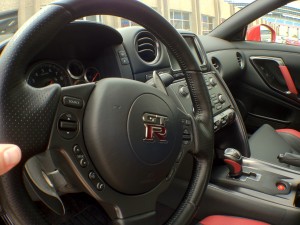 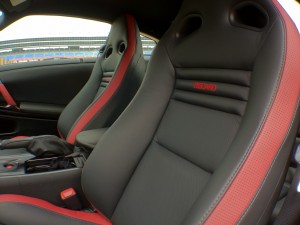 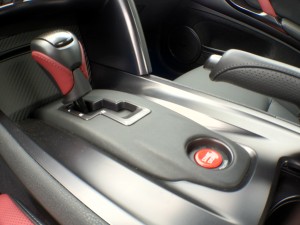 It’s not just the power, but the instant grip from the all-wheel-drive system. Before I knew it, it was time to break for the first turn. I didn’t have time to look down and see what kind of speed I was already carrying, but this had to have been the quickest car I drove that day from a standstill till breaking for the first corner.

The brakes are supplied by Brembo and have 15.4-inch rotors in the front and 15.0-inch in the rear, and they do a great job a slowing the monster down. Turning in the first corner, I was already ready to test out the legendary traction and computing brain packed into the GTR. I planted my foot back down midway through the corner and could feel the GTR pull me through the corner. Powering out of the first corner with confidence, the rest of the track went by in a blur.

I’ve heard it said before,but I can’t help myself to repeat it, the biggest issue with the GTR is the lack of feeling in control. Not that the car is out of control, but that the car has all the control and you’re just playing a video game. It’s a fantastically exciting game, but you don’t get the road and steering feel like you do in other cars.

Pulling off the track, I wasn’t ready to give up my time with the GTR just yet. I took a left out of the track exit and hit the private road around Texas Motor Speedway. I’ve already stated that the GTR was as easy and comfortable to drive as any other car, but I wanted to get the GTR up to speed over some rough roads and see how it would deal with everyday driving. I was quite pleased with the results as this tight sportscar was able to soak up bumps pretty well. You can definitely tell the difference between R-Mode and Comfort when adjusting the Bilstein DampTronic suspension.

I didn’t really get to play with all the toys, as goes the mad dash of the Auto Roundup, but my impressions of the 2013 Nissan GTR would be the same either way. You could probably keep all the extra displays and information readouts and whatnot packed into this techy supercar. As long as I could continue to plant my foot to the floor and feel that sensation on straights and turns, I’d be more than satisfied, and at the end of the day, the Nissan GTR won as the Sports Car of Texas. To be fair though, there was nothing else out there that could compete. 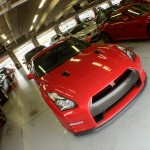 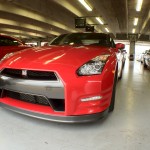 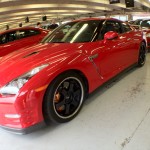 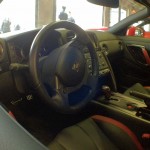 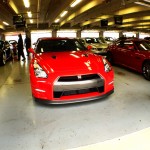 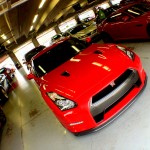 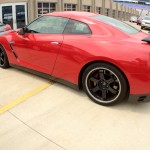 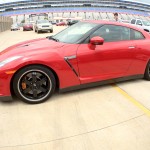 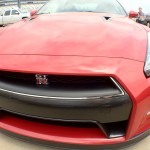 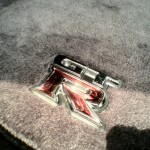 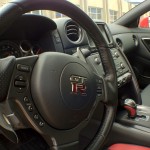 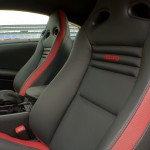 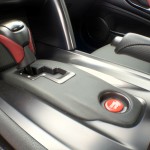 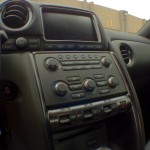