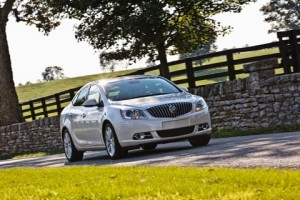 Review of the 2013 Buick Verano Turbo by David Boldt

Automobile manufacturers – and their marketing departments – will almost invariably rely on a celebrity endorsement. The Chrysler Corporation has recently (and famously) used both Eminem and Eastwood; Ford has aligned itself with American Idol’s Ryan Seacrest; and Buick, in the context of this car and this season, has the extra- large Shaq O’Neal pitching the not-quite-as-large LaCrosse, as well as Peyton Manning behind the wheel of its Buick Verano. Per Mr. Manning’s suggestion we spent part of a day getting to know the new-for-2013 Verano Turbo; think of it as ‘speed reading’…Read More »

Built atop a platform shared with Chevrolet’s Cruze (and whose basic engineering emanates from GM’s Korean subsidiary, Daewoo), the built-in-Michigan Verano brings to the party an incredible – for its price point – level of comfort and refinement, while falling short against what Buick suggests are its key competitors: Lexus IS 250, Audi A3 and Acura ILX. I’ll give them the Acura, an underwhelming redo of Honda’s less-than-well-regarded Civic, but targeting a rear-wheel drive Lexus with a compact – albeit comfortable – Buick suggests a sizable stretch; more stretch, perhaps, than that offered by Mr. O’Neal.

Were Buick’s marketing team really serious in taking on Acura, I’d suggest giving Buick buyers a 10% signing bonus. Of course, that bonus – we’d guess – is available via Buick’s two-year lease program; it’s a viable way to ‘date’ a Buick without being locked in holy automony.

Review of the 2013 Buick Verano Turbo by David Boldt 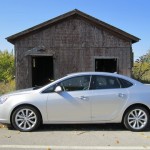