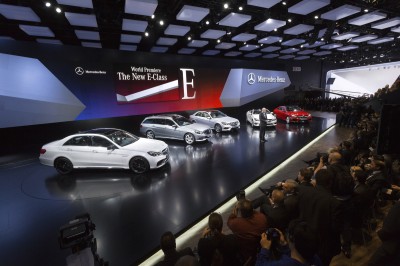 Mercedes-Benz continues its product launch momentum by highlighting two world debuts and three U.S. debuts at the 2013 New York International Auto Show, five of thirty models that will launch in the U.S. within the next seven years, or an average of once a quarter.

The World Debuts of the 2014 CLA45 AMG and 2014 B-Class Electric Drive, both under embargo until March 27, 2013, continue to demonstrate a cultivating premium small car segment for Mercedes-Benz. The CLA45 AMG features the world’s most powerful fourcylinder engine built in series production with 355 hp and 332 lb.-ft. of torque mated to performance-oriented AMG 4MATIC all-wheel-drive. The 2014 B-Class Electric Drive is powered by a 134 hp electric motor and has a range of 115 miles.

U.S. Debuts of the 2014 E63 AMG S-Model 4MATIC Wagon and 2014 CLS63 AMG S-Model 4MATIC represent a new direction of controlled performance in luxury cars that were previously equipped with rear-wheel drive. Finally, the 2014 C63 AMG sedan and coupe range receive an optional upgraded performance package called Edition 507, for which the coupe version will be present at NYIAS. By the end of calendar year 2013, there will be 21 AMG models available in the United States.

On the smart side, New York International Auto Show will see the U.S. debut of the smart fortwo BoConcept signature style car, which was designed in collaboration with leading Danish furniture design company BoConcept.

Please note the following 2013 Mercedes-Benz and smart launches in sequential order that have already been announced: 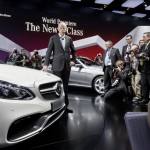 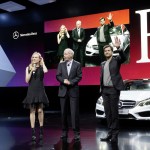 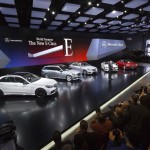