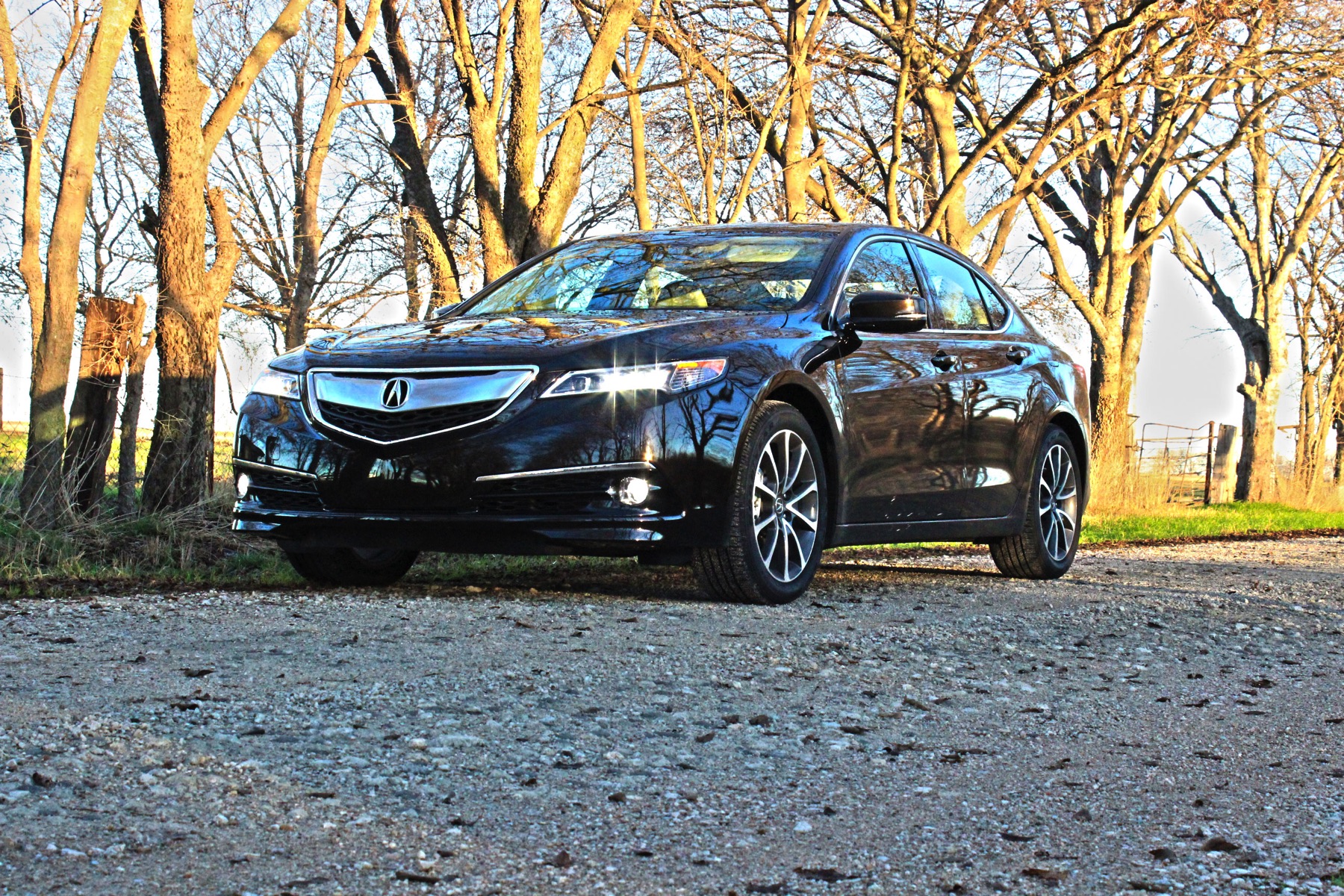 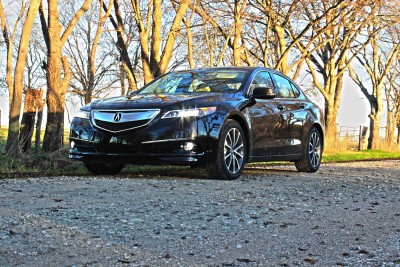 My first experience with the Acura brand was back when I was in high school. I bought a used ’88 Acura Integra Special, which I was lucky enough to pick up from an auction for only $750. I drove that car for 3-years before I sold it for $900 back in 2001. Owning this car was my not just my first exposure to the Acura brand, but was also one of the cars that helped me gain a great respect and admiration for enthusiast cars. Ever since then, I’ve been following the Acura brand from its ups and downs and am always excited to get behind the wheel of a new one. Throughout this time, one of my favorite vehicles they’ve made was the TSX, a cool and sporty sedan. For the 2015 model year, though, the TL and TSX have been replaced with this new sedan, the Acura TLX.

The TLX is made to bring more luxury to the model, while still keeping that Acura thrill many owners have grown to love. So the question for me is have they pulled out too much sportiness in favor of luxury and what does that mean for guys like me who really liked the TSX?

Our review car was a top of the line with a 3.5-liter V6 engine pushing 290-horsepower through a 9-speed automatic transmission. It also had Acura’s SH-AWD, their Super Handling All-Wheel Drive system. The first thing that came to my mind reading this stat was 290-hp out of a V6 sedan doesn’t seem like a formula for sportiness. Also, I know we’ve moved out of the power wars in favor of a how many gears can you shove in a transmission war, but a 9-speed transmission seems a bit excessive.

In reality, though, the power from this V6 is more than adequate for this sedan and during daily driving, you would never guess you’re rowing through 9-gears. You also have Acura’s Integrated Dynamics system (IDS) which are driving modes you can choose from ranging from Econ mode, Normal, Sport, and Sport +. Keeping the vehicle in Econ mode allows you to stretch every mpg by deadening your throttle response and putting the engine into a more economical mindset. Switching to Sport or Sport + enhances steering feel, sharpens throttle response, and tightens response levels for the SH-AWD system. Being in Sport+ mode really makes you forget about being in a luxury sedan making the TLX feel like a true sport-sedan giving tribute to its TSX heritage. 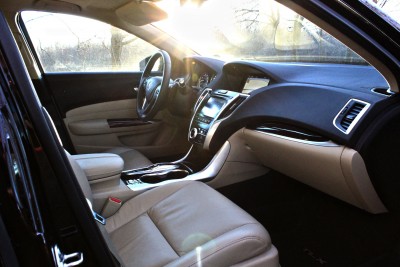 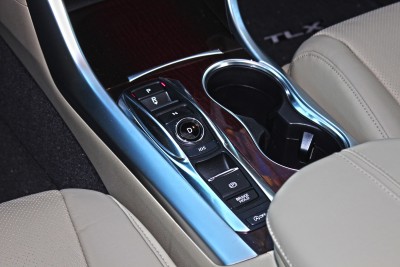 I haven’t had a lot of experience with Acura’s all-wheel drive system as you really have to be in the right conditions to put it to the test. I happened to find myself in such conditions this week as we had some extremely heavy rain. I was on my way to pick up my son and the roads were very wet and very slick. I decided if I wanted to give the system a test, I needed to do so before getting my boy in the car with me. I was stopped at a stop sign ready to turn left onto the next road, so I flipped the IDS to Sport + and shifted the transmission to manual mode. I grabbed the paddle shifter and made sure I was starting in first gear and was ready to pull out with some enthusiasm. I slammed the gas pedal down to the floor and the car rocketed off the line with no problems or fuss at all. Pulling around the corner at speed, I could feel the rear of the car starting to slip and then almost immediately felt the SH-AWD system straighten me out. I banged through second, third, then fourth gear getting to speed without a problem. Coming up on a sharp right-hander, I firmly pushed the break down, again feeling the system sorting out ways to keep me from getting in trouble. Pulling around the right-hander, I could feel the car wanting to step out again. I put a little more thrust into the turn, but the backend sorted itself out again.

Overall, I left very impressed with how well the TLX was able to handle itself in the conditions I threw at it. It’s nice to be in a car that instills confidence into your drive no matter the conditions. 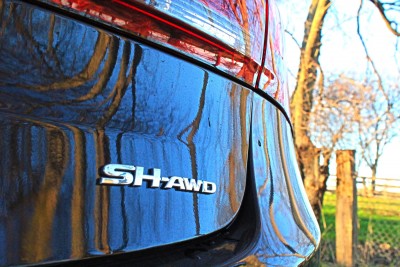 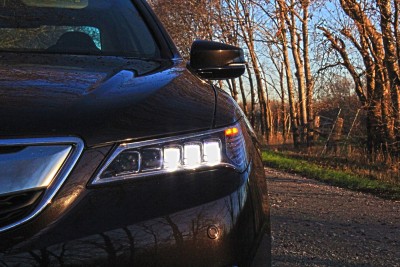 Even with its confidence building technology on the road, the real way to be blown away by this car is by sitting in it and driving it as a daily driver. The Ebony black leather seats in our TLX were by far the best seats in any Acura product I’ve sat in. The leather was nice, but the bolstering and padding was extremely comfortable for everyday driving. Of course the interior is packed full of technology for safety, comfort, and entertainment, but the one big thing that will stick out to you is the electronic gear selector. This is a trend going around now that there is no need to run a cable form a gear shifter to the transmission; it’s all electronically controlled now. Chrysler has the rotary shifter, Lincoln has push buttons up on the dash, Jaguar has the knob that elevates from the console so it seems like this is definitely a trend in the luxury market these days. Acura has gone with the multi-button approach laying out the park button, a reverse switch that actually has to be pulled back on, a big circular drive button that lights up with a green halo, and the parking brake switch that can be pulled back to engage the parking brake and pushed down to release it.

This may take a little getting used to and if you’re like me and usually rest your hand on the gear shifter while driving, you’ll have to find something else to do with that had, but it’s a really cool feature of the interior making this car stand apart from the crowd.

There’s so much more to talk about with this car that I could go on for days, but I want to leave you knowing how much I was actually impressed with this car. I was worried going in that they may have messed up a car I grew to love and in turn they’ve made it that much better. The luxury car market is growing and having Lincoln making cool cars again, Hyundai and Kia throwing their hats in the ring, and all the big luxury brands bringing lower end models, you definitely have a lot to think about entering this market as a consumer. I think with this car, though, Acura has done a fantastic job and could easily see the younger, tech crowd jumping all over the TLX. 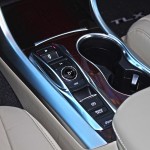 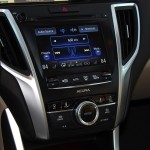 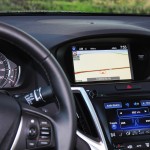 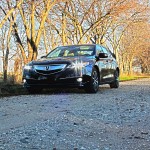 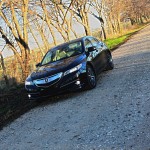 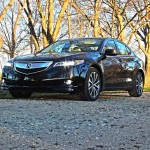 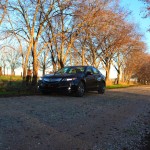 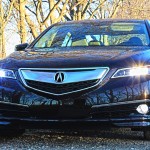 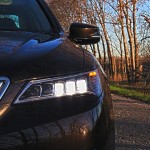 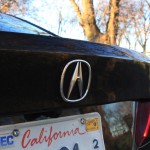 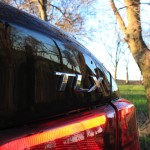 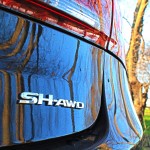 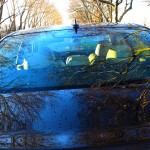 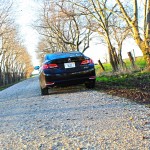 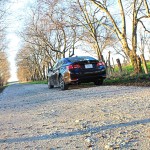 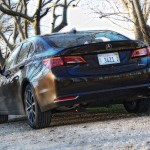 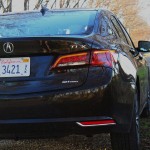 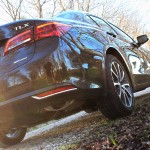