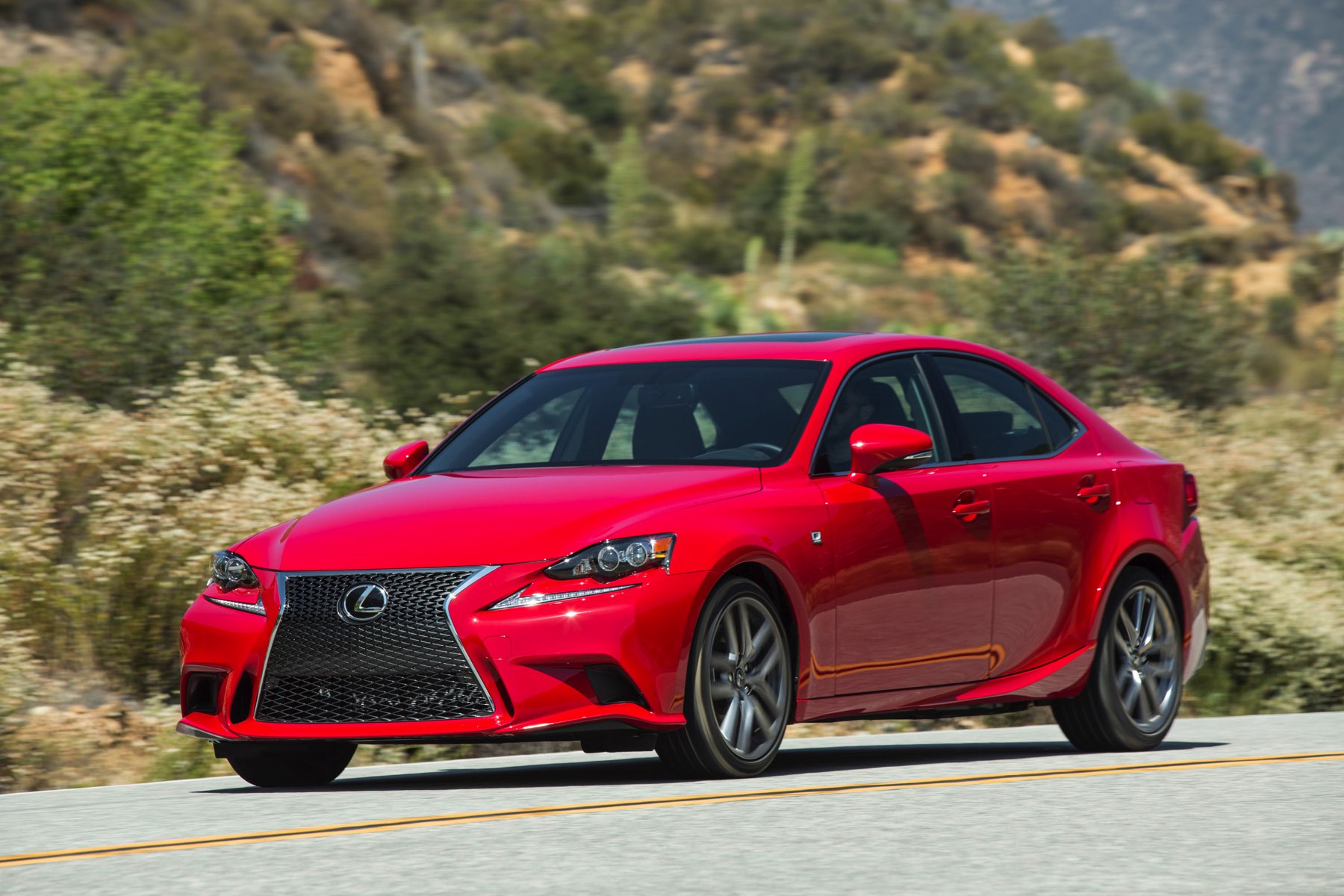 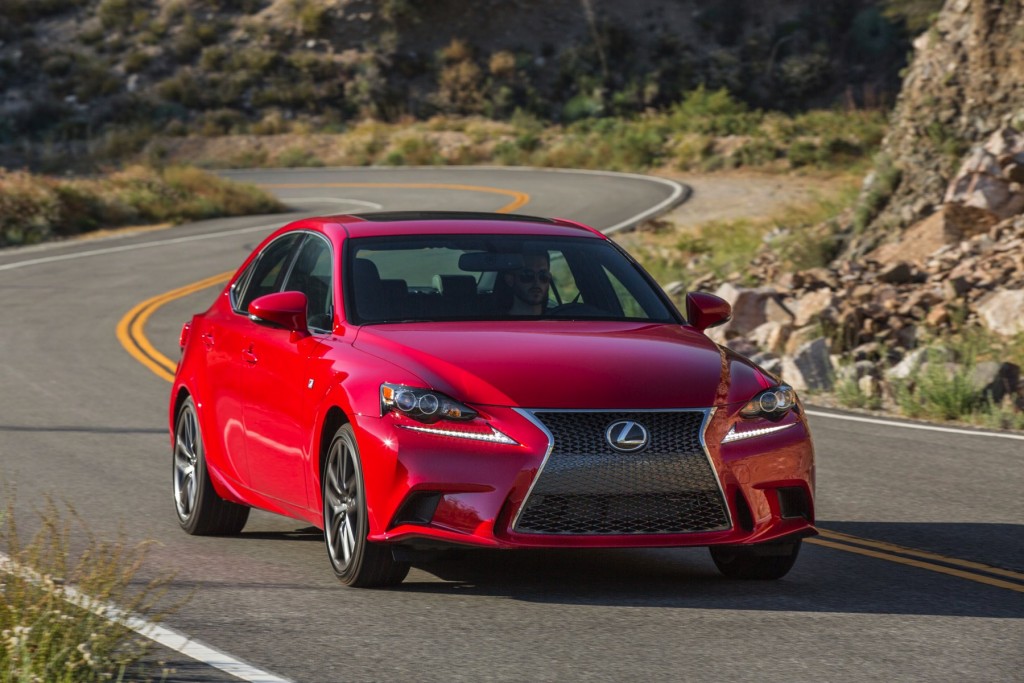 In the forty years since BMW launched its now-iconic 3-Series, I’ve watched its development from both an envious distance and – and as a salesman on the showroom floor – an almost granular perspective. My first sighting of a new ‘3’ was at a gas station in ’77. At that time I owned an Alfa sedan, as true to the three-box school of sedan design as the Italians could make it. In contrast, while BMW’s new 320i offered a relatively upright design and generous greenhouse, its three boxes (hood, cabin and trunk) were all artfully integrated into one almost holistic whole. In the ensuing four decades BMW’s 3-Series has grown up and, like most of us, gotten a tad softer. And that brings us – after too much delay for best SEO results – to the Lexus IS 200t. For those wishing BMW still built a tightly drawn, responsive ‘3’, you needn’t worry…Lexus is building it.

In its beginning, few would have guessed Lexus – even twenty-five years later – would be building a 3-Series competitor better suited to diehard 3-Series enthusiasts than BMW would be building. At the time of its 1989 (MY 1990) debut, Toyota’s new, upmarket channel introduced a Mercedes-like 4-door targeting Cadillac customers, as well as an entry-level, Camry-based 4-door targeting Camry owners with growing disposable income. It was only with the launch of the IS 300 – roughly a decade later – that Lexus put the 3-Series on its radar. And while the IS 300 certainly attracted its share of buyers, it was a relatively small share.

Today’s IS, now available with a 4-cylinder turbo (tested), a moderately tuned 3.5 liter V6 with AWD (IS 300 AWD), and 3.5 liter with 306 horsepower and 0-60 time of 5.6 seconds (IS 350) won’t be all things to all people (they aren’t offering a wagon, and the coupe variant is more aggressively executed); if looking for a 4-door sedan at about $40K, however, it’s a compelling proposition. And while FORTY LARGE may seem, well, large, the new Maxima can brush that same number, while whatever Infiniti is calling their entry-level sedan (formerly the G37) can also easily push $40K – while being something like a decade old! Here, then, is the overview.

We’ve said it was tightly drawn on a smallish footprint, and we’ll say it again. With a shortish front overhang, there is no disguising the IS 200t’s rear-wheel drive platform. And while the greenhouse is moderately generous, this is very much a sport sedan one steps down into; you won’t confuse it with the wife’s Wrangler Unlimited. We’ve been fans of the IS since its early days, and there remains a corporate identity to this 3rd-gen offshoot. The greenhouse is fully integrated into the overall shape, creating a visual dynamic that is almost – but not quite – that of a 4-door coupe. We like its overall proportion, tightly drawn exterior and nimble (at least visually) first impression. 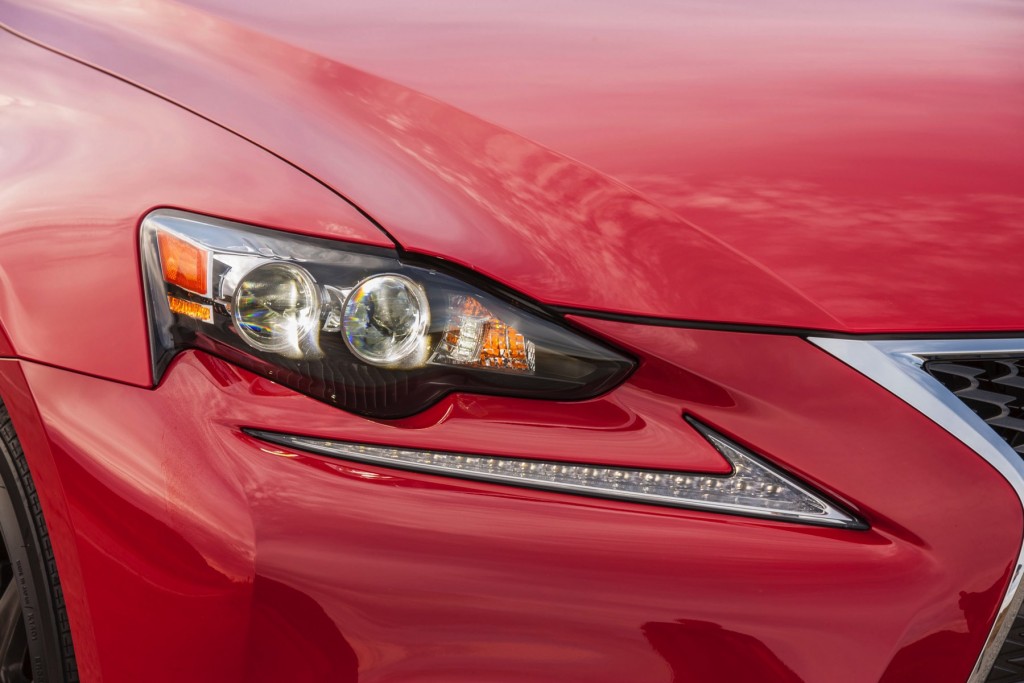 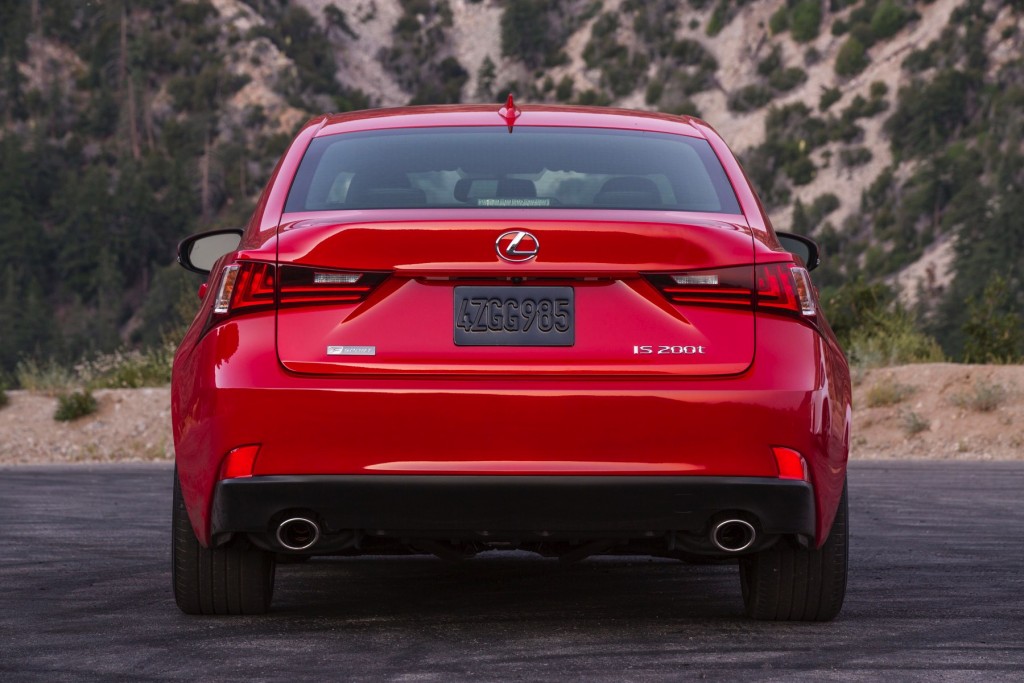 As noted, you step down into the IS, which – we’ll admit – makes it a tad more awkward for someone elderly or arthritic. (I describe my difficulty as a sports injury, but no one believes it…) Once inside, any awkwardness is forgiven, as you’re enveloped in a cocoon that is one part business and one part sport. Gauges and controls are as intuitive as gauges and a console-mounted mouse can make it, while the steering wheel, pedals and console-mounted shift lever fall – as R&T’s John Bond might have said – easily to hand. The front buckets certainly provide adequate lateral support, but aren’t particularly difficult to access or climb out of. But again, just as you need to climb down to get in, so do you need to reach up to get out. If you haven’t had a sports injury (or recent back surgery), the ingress/egress is just about perfect! 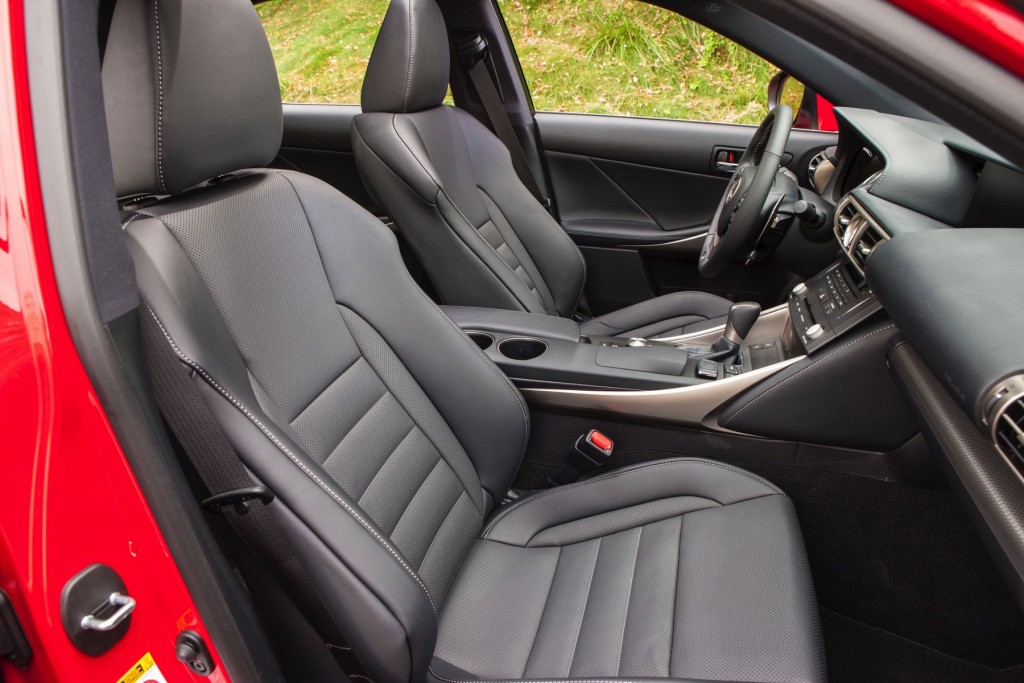 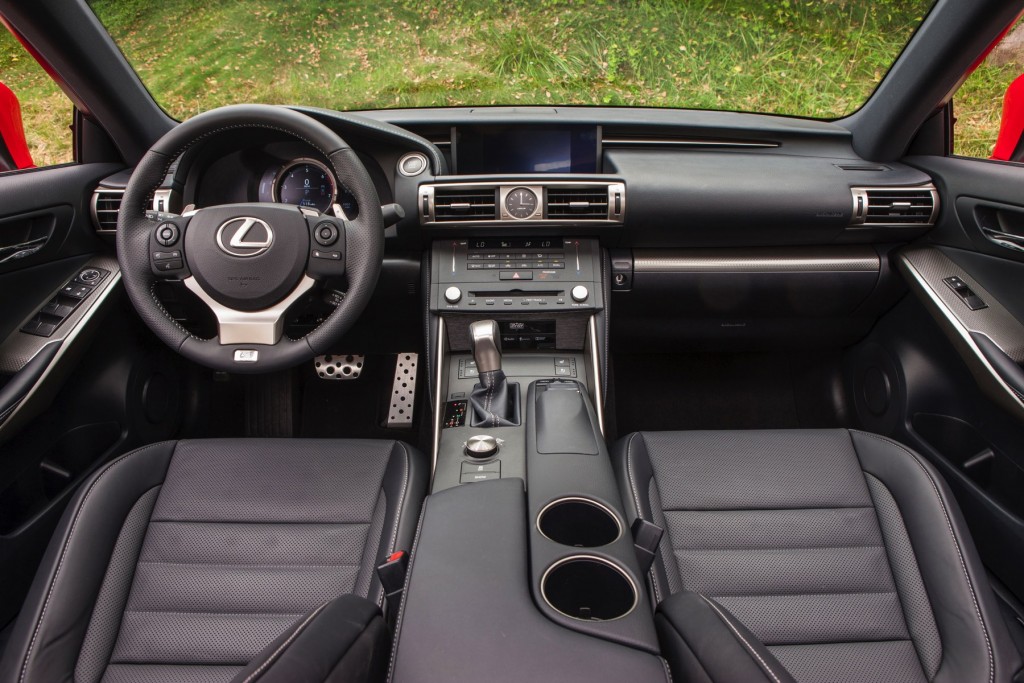 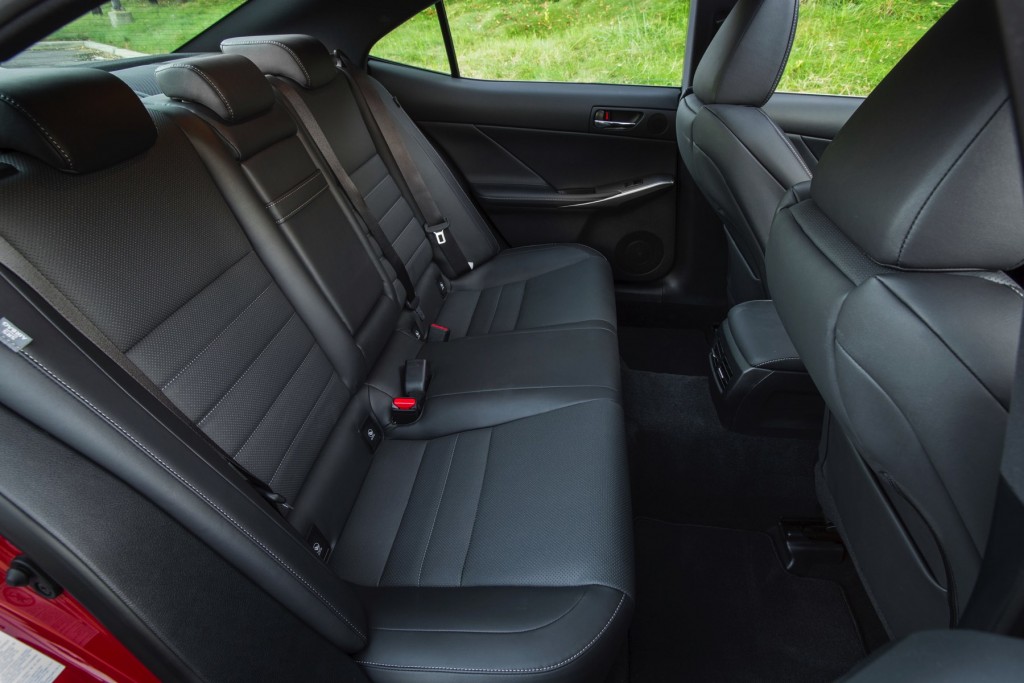 In what seems like another lifetime, Road & Track did a feature on a postwar Maserati. It was within the article that the author identified two liters as the perfect displacement for a sporting automobile. And while his determination was based on a normally aspirated powertrain, along with a curb weight closer to one ton than two, I’ve maintained his observation as ‘the truth’ for roughly forty years since first reading it. If the vehicle can’t be entertaining and responsive with two liters of propulsion it’s probably too fat for my personal tastes. 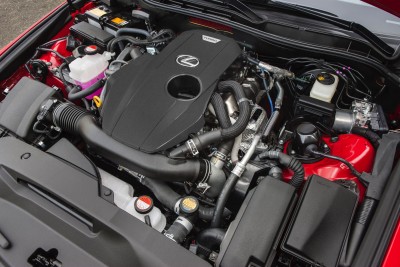 At freeway speeds the Lexus 8-speed Multi-Mode auto does exactly what you’d hope it would do; that is to say, it behaves competently and efficiently, with no surprises. And while the stated EPA is impressive, don’t plan on getting it – the Lexus 2.0 liter turbo is entirely too much fun to maximize efficiency, even though an ‘Eco’ mode is accessible.

The chassis specs are exactly what you’d expect from a contemporary sport sedan. The all-independent suspension’s ‘happy time’ is enhanced by our car’s F Sport option (available on all variants of the IS), modifying the standard platform with unique 18-inch wheels and special suspension tuning, while ‘sharpening’ the design with ‘unique’ interior and exterior trim.

None of the above truly captures the innate ‘tossability’ of today’s IS. At first blush you’re intrigued; with but a few minutes behind the wheel you’re seduced. And after an hour-long romp on a less-than-congested freeway, you’re ready to commit. Until – of course – you remember FORTY LARGE is twice your annual salary… 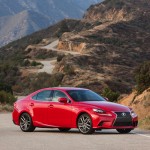 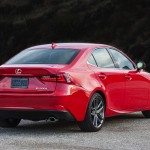 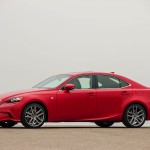 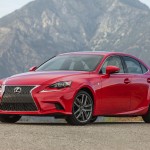 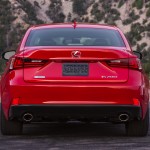 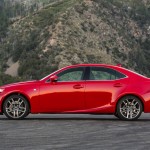 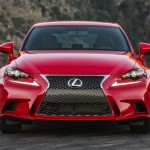 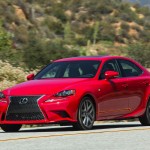 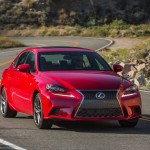 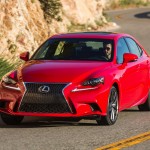 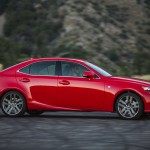 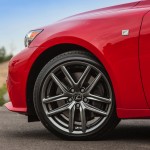 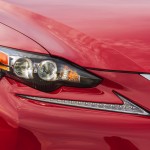 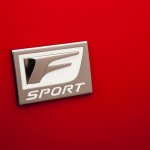 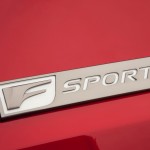 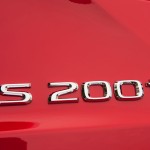 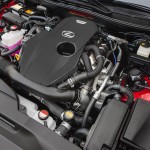 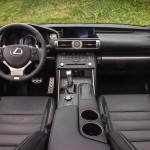 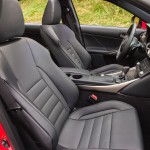 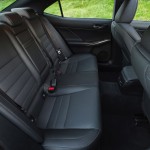 Chrysler’s Town & Country: Built for Any Town, Most Countries
Mazda’s SkyActiv Miata: Is It the Sky King?
Event Calendar