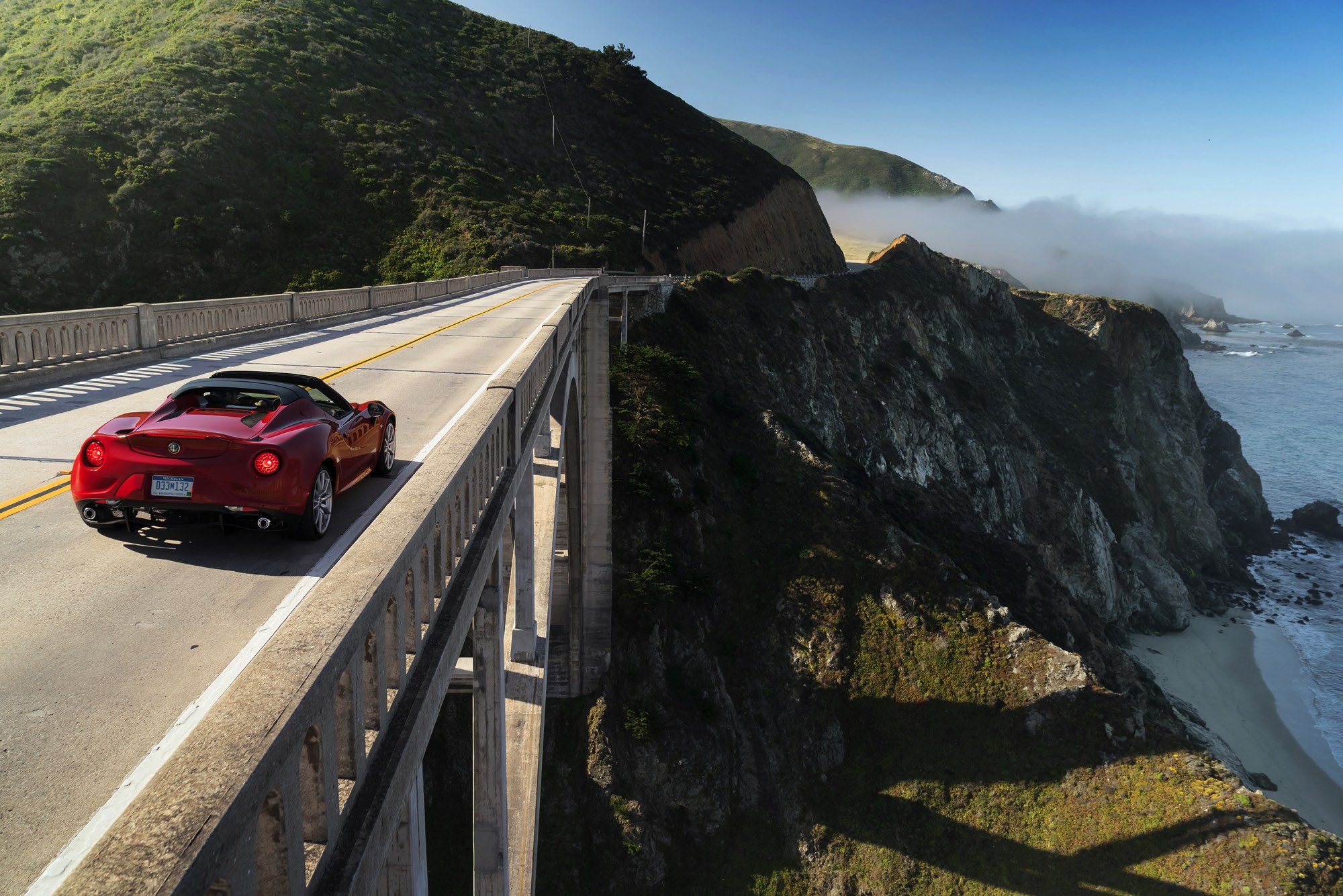 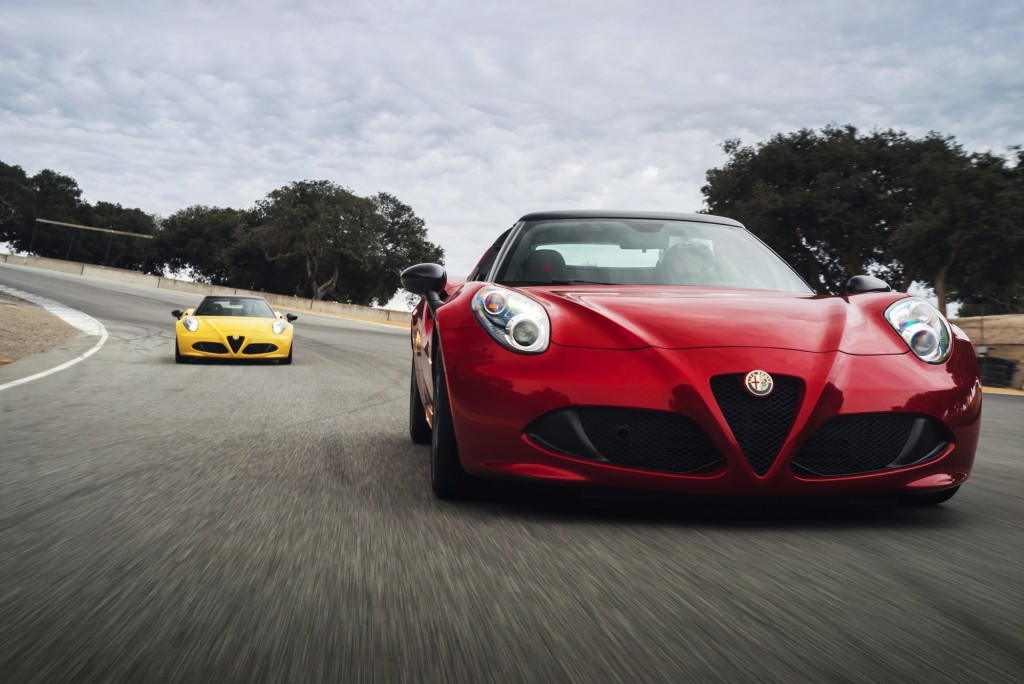 Southlake, TX – At this year’s Washington (DC) Auto Show, the suits at FCA had the Alfa Romeo display, boasting both the 4C and the upcoming Giulia sedan, sitting behind a few thousand square feet of Ram trucks, Jeep SUVs and Chrysler cars. This was while Alfa’s big buck competitors – Porsche, Benz and BMW – were downstairs, where you’d expect shoppers for big buck cars to gravitate. In the District of Columbia, boasting one of this nation’s most diverse and, uh, wealthy populations, you don’t hide Alfa’s babies in a corner, but its FCA parent did…

Although Alfa’s marketing team did a far better job at the bigger Chicago show, where Alfa was adjacent to Porsche and immediately behind Maserati, the stutter step that has afflicted Alfa Romeo’s return to the U.S. has been difficult to watch, both as a reporter and biased enthusiast. Admittedly, my Alfa ownership has suffered its own form of a stutter, with a ’74 Berlina disposed of shortly after its warranty expired and an ’82 Spider traded for a Guzzi LeMans, I’ve remained a fan of both Alfa products and Alfa’s promise. And few cars speak to that promise as well as Alfa’s new(ish) 4C, a 2-seat, mid-engined device that could serve as the Dino Ferrari enthusiasts have been waiting for. Thankfully, it comes to us as an Alfa…

To channel Renee Zellweger in her role as the girlfriend opposite Tom Cruise (something I rarely do…) in Jerry Maguire, the Alfa had me at hello. This is automotive design as pure as a car built for volume production can be pure, its composite body shell wrapped tightly around the Alfa’s innovative carbon fiber monocoque (Latin for ‘one coque’) chassis. Sitting beside Alfa Romeo’s legendary Tipo 33 racecar at both the New York and Chicago auto shows, the 4C – while substantially bigger – looked for all-the-world like the logical successor to the 33, separated by perhaps four years rather than four decades. 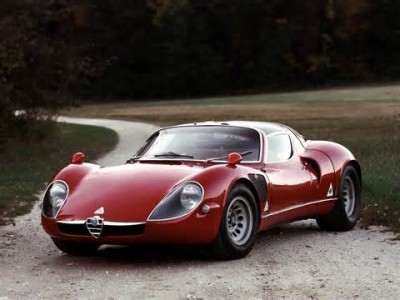 The Alfa Romeo Tipo 33 was a sports racing prototype raced by the Alfa Romeo factory-backed team between 1967 and 1977.

At the front, the Alfa’s iconic shield continues to serve as its centerpiece. Thankfully, the press fleet administrator didn’t insist on a front plate, as the blemish to the front fascia would have been no less disconcerting than Robert De Niro in drag. With this nose you need to watch out for the occasionally sharp approaches of the driveway, but it’s a small price to pay for the drama that unfolds as you approach the 4C with a key.

In profile we found the 4C compressed visually, but that’s to be expected with a mid-engined design and the engineering mandate to centralize mass. For the American (or ‘massive’ American) market another two inches of wheelbase – and cockpit – would have been huge, but you learn to appreciate the end result, which is far more dynamic both visually and functionally than Porsche’s Boxster or Cayman. The 4C is closer in both design and design intent to the minimalistic Lotus Elise, which remains available in Europe but (regrettably) is no longer sold in the U.S. Staggered wheel and tire sizes also enhance the competition vibe, while making it harder – unless writing for Dub – to rotate your tires front to back. 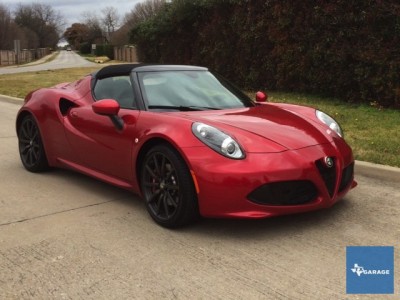 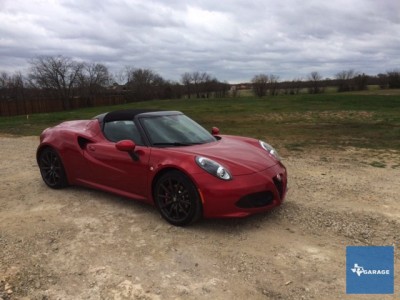 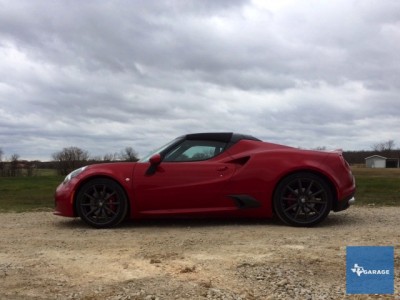 From the rear ¾ view the Alfa is all business. Unlike Porsche, whose cylinders are horizontally opposed and thereby lower, the Alfa’s backside conceals a transversely mounted four sitting vertically in the chassis. With that, the rear deck becomes higher and the resulting visibility becomes smaller. You can still see out of the Alfa – it isn’t, after all, a bread van – but you’re harder pressed to see in.

When inspecting the powerplant, a 1750cc Fiat-derived four, know that there isn’t – regrettably – very much to see. Like so many manufacturers today, rather than create an engine as interesting visually as it is functionally, Alfa’s design team instead covers almost the entire engine bay with a big-ass molded cover. My Berlina and Spider both enjoyed twin overhead cams that weren’t covered or minimized by anything beyond the hood itself. FCA, a partner with Mazda on the Miata-derived 124 Spider, should take a look at Mazda’s 2.0 liter twin cam for an idea of what a 2016 powertrain can look like. Soon.

Of course, after the walkaround it’s time to actually drive. And you’re also hard pressed to get in. Just three months removed from back surgery I wasn’t sure how it would work, given the Alfa’s low entry point and wide (structural) sill between driver and door. But then, no one ever suggested the ingress to an Apache attack helicopter was easy. Once inside, however, you’re held in check by a supportive bucket and fronted by a competition-inspired flat-bottomed wheel. The gauges offer a clear, informative display, while the ventilation controls look to be taken from the Fiat 500; you know, the one Fiat offered in 1961. And the Alpine stereo impresses as one picked up at Best Buy on their closeout table. If Alfa wants to incorporate a vintage look, I’d suggest Becker or Blaupunkt.

Once lit, the Alfa 4C is, in a word, absolutely awesome.

None of the small disappointments, however, will overshadow the visceral excitement of lighting the candle. Once lit, the Alfa 4C is, in a word, absolutely awesome. Raucous and/or rowdy, if you like the commotion that accompanies a bar fight you’ll probably like either seat in Alfa’s 4C. And if you enjoy the 4C’s immoderate cacophony during the warm-up phase (where you can take a deep breath and summon what’s left of your courage), know you’ll love it as revs approach the 6500 rpm redline. But first, of course, you need to get out of your driveway.

The 4C’s TCT (twin-clutch transmission) takes – thankfully – but a moment to assimilate. ‘R’ backs you up, while ‘1’ moves you forward. You have a choice of ‘A’ or ‘M’ modes, with automatic being my choice; paddles lose their novelty after but one or two upshifts/downshifts. You also have your choice of four driving modes – Dynamic, Natural, All-Weather and Race. Not having affordable access to a track, we didn’t access race. And in an unseasonably dry week, we didn’t touch all-weather. But there’s still plenty of fun to be had in ‘N’, and more fun to be had with ‘D’. Make that a-lot-of-fun, with the Alfa’s 237 horsepower and 258 lb-ft of torque providing immediate response, whenever and wherever you need it.

Of course, with its impressive power to weight ratio (our Spider weighs under 2,500 pounds, roughly the same as the last-gen Miata) you also need appropriate control. Thankfully, the 4C’s steering, stopping and cornering limits are fully appropriate to the Alfa’s power and torque. Only ‘stupid’ will get you into trouble, along with – we’d admit – those SUVs and Super Duties that just can’t see you. This platform is soooo made for the track, but guaranteed to reduce the tedium associated with the 9-to-5 commute.

And if the commute is on a beautiful spring or summer day, know that the Spider’s top does come off. For our purposes, however, we left it on; in pursuing fresh air we still prefer a bike or motorcycle. Visually, we also prefer the continuity of the Coupe – we’d pop for Basalt Gray fitted with Tobacco leather – to the slightly interrupted look of the Spider, along with a Monroney in the mid-$60s for ‘our’ Coupe compared to mid-$70s for the test Spider. Of course, if it had been brought to the States as a Ferrari Dino the window would easily be six figures – and you’d have to get your name on a list. I hate lists.

In my zip code, which is popping with eye-dropping cars everywhere but my garage, I’ve yet to see Alfa’s 4C, except for this press car sitting in my driveway. Ferrari’s 458? Of course. Lamborghini’s Hurracan? Of course. And while there are more Infinitis, Benzes and BMWs than you can shake the proverbial stick at, from my (limited) perspective there isn’t one sighting of Alfa’s 4C. And I’m here to tell you: Alfa’s apparent absence is an absolute travesty. Hopefully, some neighbor with money (not – of course – me) is working to correct that, while the suits at FCA and Alfa work on some down-the-road merger rather than of-the-moment marketing. Now, if I could rev up my 401K. To channel Cuba Gooding, Jr. from the same Jerry Maguire script…show me the money! 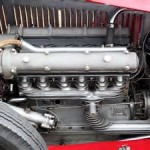 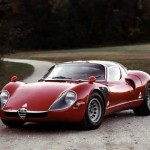 The Alfa Romeo Tipo 33 was a sports racing prototype raced by the Alfa Romeo factory-backed team between 1967 and 1977. 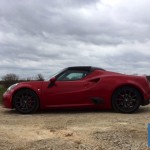 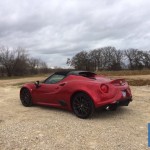 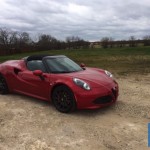 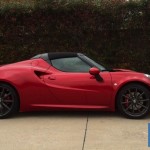 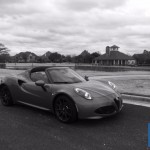 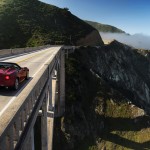 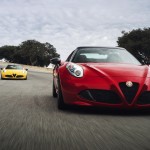