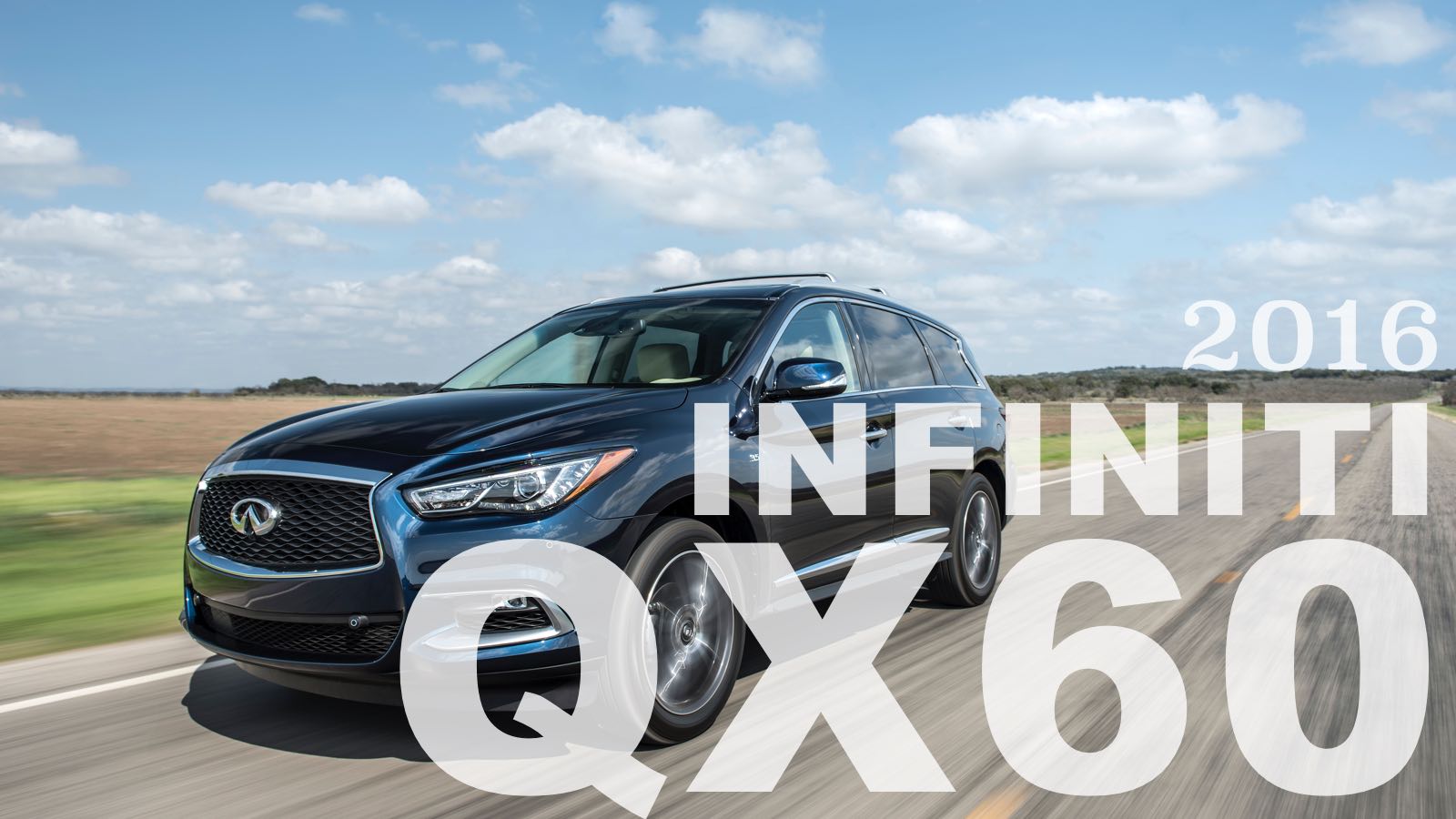 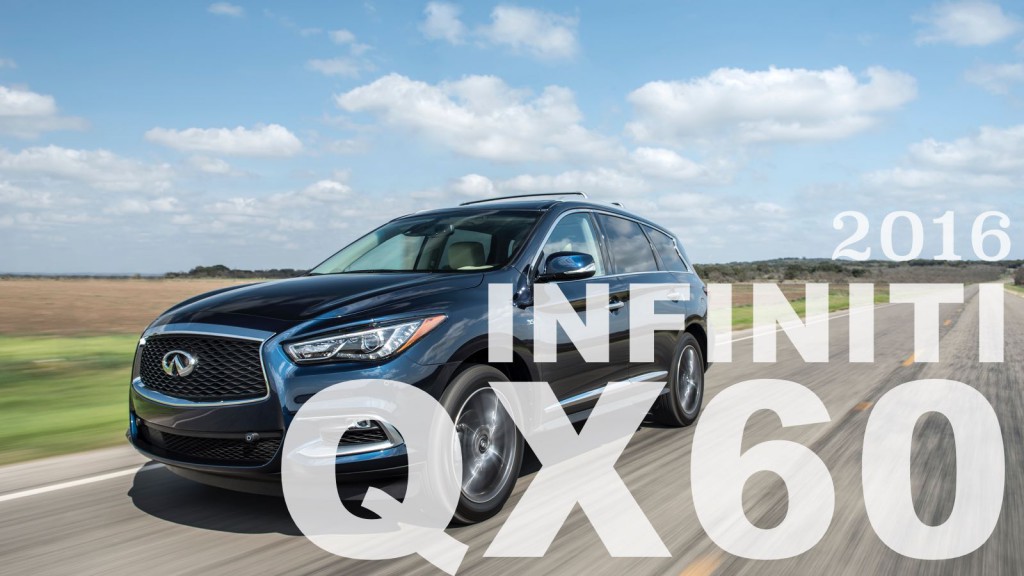 So, in making my request to the company delivering press vehicles I mentioned sporty and recreational. I’m thinking 2-place coupe, 2+2 GT or – at worst – a credible attempt at a 4-door sport sedan; I wasn’t – I gotta’ admit – thinking 3-row SUV. But that, in the guise of Infiniti’s refreshed QX60, is what I have. And on some level – perhaps two levels – it’s sporty and recreational…’sporty’ if your destination is a ball game, and ‘recreational’ if you are towing a Jet Ski. But on the eve of a long weekend with family in town and a couple of airport pickups, maybe we’ll call it timely.

Regardless of what we call it (and several years after Infiniti’s suits instituted a wholesale change of the brand’s nomenclature we’re still not sure what to call it), it would seem Infiniti – in a manner not unlike Secretary Clinton – has finally found its voice, some 25 years after first making its U.S. appearance. As everyone paying attention will remember, Infiniti introduced its first models in the U.S. – the excellent Q45 and marginal M30 – with an esoteric ad campaign, quirky showroom architecture and little else, while Toyota’s Lexus division signed up the best dealers in most markets and – notably – cribbed styling from the S-Class Mercedes. The die (pun fully intended) was cast, and it took Nissan/Infiniti roughly a decade – with their intro of the G35 sport sedan – to recover.

Fast forward to today’s Infiniti lineup and you’ll find a seat for almost any butt. Its newest CUV, the QX30, faces off against M-B’s GLA 250 and the Lexus NX 200t, while in the grownup category the QX80 takes on the LX 570 and Mercedes GLS. In between are a handful of sedans and coupes and this, the 3-row QX60. In affluent ‘burbs with good school districts, the QX60 is a popular way to populate the car pools. We’ll gaze…

EXTERIOR: The QX60 shares its basic platform with the revamped Nissan Pathfinder. Thankfully, it doesn’t share the Pathfinder’s relative anonymity, with a front fascia and greenhouse that are far more expressive and – by extension – expensive than that found on the Nissan. For ’17 the Infiniti refresh includes a redesigned ‘double-arch’ front grille, along with greater use of LED lighting. Chrome continues to play a big role in Infiniti’s 3-row strategy, with enough bling to make you think Trump; except, of course, the Infiniti bling is tasteful. Buyers have their choice of seven exterior colors, including new Hagane Blue (our test vehicle) and Jade Green. What Infiniti describes as a crescent-cut D-pillar is retained, which serves as another differentiator between this Infiniti and Nissan’s Pathfinder; in short, the QX60 takes its own path.

INTERIOR: There’s a lot to like on the inside, with an upscale look and feel appropriate to something selling for upwards of $45K. The front, leather-covered buckets allow relatively easy access, while providing enough bolster to keep you reasonably well supported. The second row seating is broad enough for three, but not so expansive as to make one feel, well, lost. The second row backrest is adjustable, as is legroom – and the outer seat provides for one lever flip-and-fold access to the third row. That seat, to be sure, is dimensionally tighter, but will still accommodate two adults in what we’ll term a pinch. Get it?

The QX60’s perforated leather is both comfortable and – from appearances – durable, while piping and contrasting stitching provide a visual uptick. On the dash, we liked the shape of the steering wheel, illuminated gauges and the intuitive nature of both audio and HVAC controls. The maple interior accents work, although would work better with the available ‘wheat’ leather than they did with our vehicle’s graphite. Dash plastics are perhaps the one disappointment, looking more appropriate to fitment in a Nissan than on an Infiniti showroom.

Our $44,400 Infiniti was ‘blessed’ with a whole lot of technology, the most significant of which was the Deluxe Technology Package at an additional $6900 or, to put it another way, one new Kawasaki KLR650. As you’d guess, Intelligent Cruise, Blind Spot Warning, Backup Collision Intervention and Distance Control Assist are included; it will do the driving so you – of course – don’t have to do the driving. It also includes climate-controlled front seats, the maple interior accents and Predictive Forward Collision Warning. We liked the maple accents and ventilated seats…

PERFORMANCE: At its creation the Infiniti franchise was intended to be a performance-oriented brand, going after BMW’s 7-Series with the Q45 and, later, the 3-Series with its G35 sedan. Today BMW doesn’t offer a model directly competitive with the QX60, but if it did you can be assured there would be more under its hood than the Infiniti’s 265 horsepower. Historically, this may be one of the industry’s great powerplants, but when driving through a CVT transmission and attempting to motivate 4,500 pounds (AWD) plus passengers, you’ll see a new Supreme Court justice before you’ll see 60 miles per hour. Even in ‘Sport’ mode the effect is – at best – nonchalant. And while this would be fine if the QX60 occupied a segment of one, but 3-row crossovers are almost wildly abundant, populating the near-luxury segment as if it was a Republican primary.

We also wish the ride/handling balance was a tad more refined. Happily, it drives ‘smaller’ than it actually is, but its reaction to poor pavement was, well, occasionally poor. To be sure, no bruised backsides, but we sure-as-heck weren’t thinking your father’s Buick. Or Infiniti.

Among the available 3-row crossovers costing upwards of $40K, Volvo’s new XC90 is compelling, as is Mazda’s upscale CX-9 and – to a lesser extent – Buick’s well-received Enclave. We think Inifiniti needs to add another 35 horsepower, subtract roughly 500 pounds or – ideally – both.

THE WRAP: If we were to order a QX60, we’d be inclined to go modest; this is a far more compelling package when priced in the mid-$40s than it is if pushing $60K. But perhaps its target demo just doesn’t care. If you’re thinking lease, think $429/month for 39 months, with roughly $7500 out of pocket. And at the end of your 39 months you could buy it for under $30K. That is the best used car you can buy – your used car.