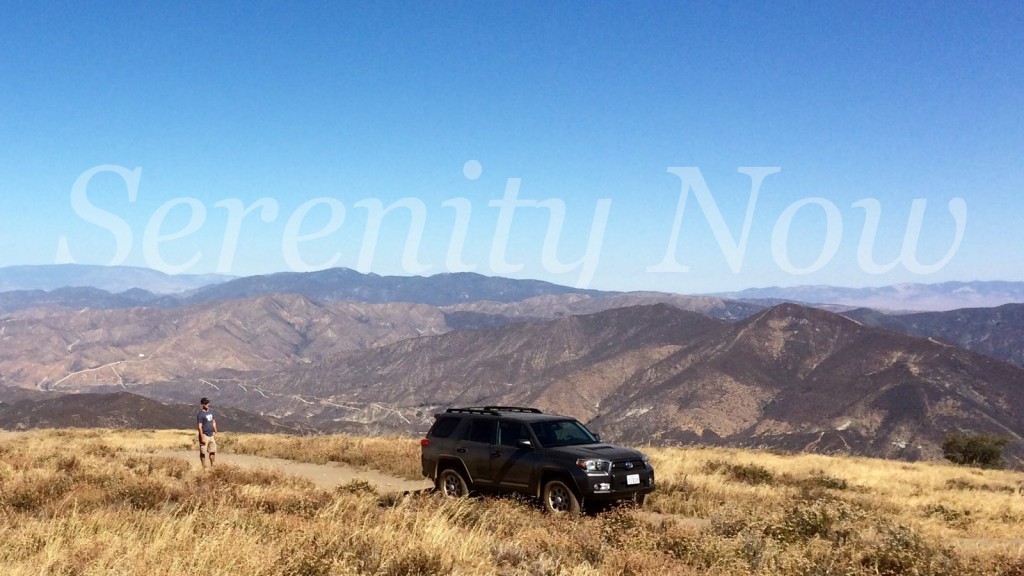 North Hollywood, CA – The above descriptive doesn’t begin to do justice to the offroad opps just a half-hour beyond the hub-bub that is rushed hour L.A. With my son-in-law, Ethan Dietrich, as guide, we headed out early on a Saturday morning in his 2010 Toyota 4Runner.

The 4Runner, built in the first year of this current generation, is what Toyota termed at the time the ‘Trail Edition’. And while this adult Toy isn’t ‘manned up’ like Jeep’s Rubicon, its functionality is obvious, helped in no small part by Ethan’s installation of Kumho 10-ply tires and – not incidentally – a front skid plate. The second car on Ethan’s driveway is a Toyota Prius; with that, he has a perfect set of offsetting penalties.

So, we’re off – and like any number of others heading out on Los Angeles freeways, we’re hell bent on the escapism. Fortunately, Santa Clarita has it. Home to both Six Flags Magic Mountain (which we weren’t able to drive) and Hurricane Harbor, we were headed to that portion of Angeles Forest known as the Rowher Flats Trailhead. There, Ethan aired down the Kumhos (from 35 psi to about 20) and headed out.

To be sure, ‘out’ into Rowher Flats ain’t the same as going to Utah or the Klondike, but you’d be utterly amazed by the sense of pure isolation just 20 minutes – or so – from Burbank; it is truly/utterly/irrevocably spatial. There wasn’t, to be sure, a surfeit of trees, greenery or vegetation, but it was there; Matt Damon (The Martian) would have been absolutely giddy, and we approached ‘giddy’, if only to think the offroading would be awfully good if chased by a cold beer.

The 4Runner, with a layer of dusty swirls that looked as if configured by Trump’s hair architect, didn’t disappoint. In our own test of the 2016 TRD Pro, we found the most recent iteration of Ethan’s ’10 very comfortable on-road, but seemed as if it would feel too big venturing into the dirt. Happily, the big Toy took on anything you’d care to throw at it with – as is most often the case – a few monthlies still tacked onto the payment book.

For offroading in California’s parks you’ll pay a fee, but it’s one heckuva lot less than Ted Turner paid for comparable isolation. Of course, Ted had – at least for a few years – Jane Fonda, while we have only the videos and what ifs.

A Tale of Two Sierras – Owning Your First Car
The Life and Drives of H.B. Halicki
Event Calendar