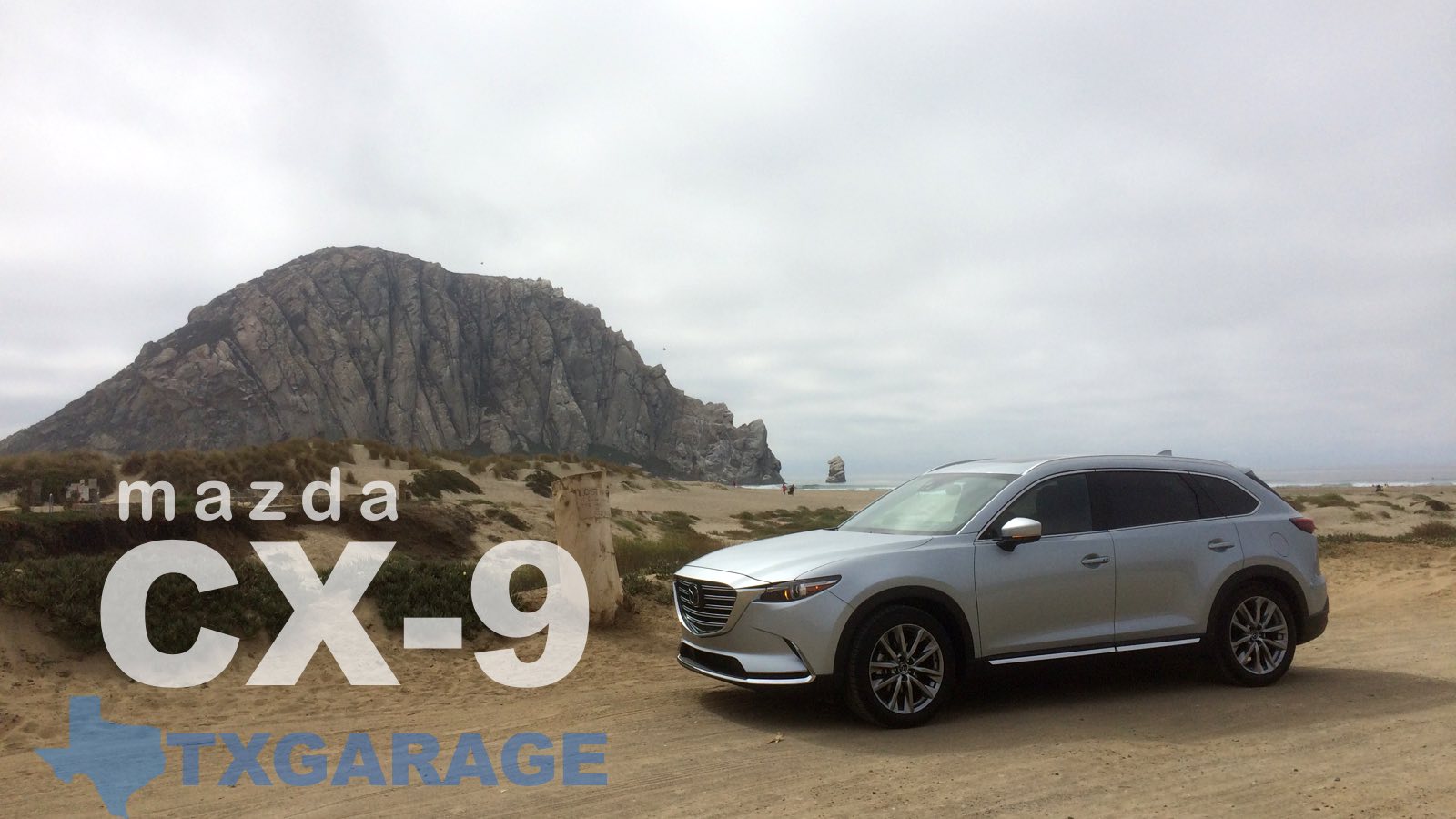 Los Angeles – At roughly the same time as the Wall Street Journal’s Dan Neil is thrashing the new 911 Turbo on Northern California’s Thunderhill Raceway, I’m ferrying my wife, two adult children, a son-in-law and (not incidentally) our one grandchild down the California coast, from San Simeon to Morro Bay, in Mazda’s all-new CX-9. Despite Dan’s Porsche and Pulitzer (along with a weekly paycheck that – I’m guessing – approximates my annual salary) I think I have the better gig. The coast is compelling, the company is always engaging, and Mazda’s new 3-row crossover lives large while driving small.

Given the Mazda’s three rows of accommodation, I’ll admit that – as a grandparent – I finally get having three rows when, inevitably, I’m often only using one. And since its introduction in 2006 I have gotten Mazda’s CX-9. In the somewhat dismal inventory (at least for enthusiasts) of 3-row crossovers in the United States, the CX-9 stood out from the Highlanders, Enclaves and Pilots for hitting the sweetspot in perceived size and ‘sporty’ capability.

That, of course, was then. And in the fall of 2016 the all-new CX-9 is ‘now’. As a descriptive ‘all new’ is tossed around liberally; we did a fact check (just one of thousands in the last twelve months), and from its platform to its drivetrain to its sheetmetal the new CX-9 is as all-new as you’ll typically find in a dealership showroom. With Mazda’s engineers referencing the SKYACTIV manual for guidance in creating a light, rigid structure, they could propel that structure with a smaller – albeit responsive – turbocharged four. Enclose it in the extra-large variant of Mazda’s KODO design language, and we have a winner for those fans of 3-row crossovers. We’ll begin on the outside…

EXTERIOR: I first saw the new CX-9 in its halo color, Machine Gray. A color formulated to, as Mazda describes it, make the CX-9 look “as though it were carved from a single ingot of steel,” the color absolutely nails the contours and proportions of this CUV. Perhaps deceptively, not only are the sheetmetal’s contours that much more dramatic, but they also seem tighter. But not, notably, as visually athletic as the 1st-gen CX-9; its metal seems more shrink-wrapped around the unit body than this 2nd-generation. But we like the passive/aggressive curves, adequate greenhouse and – above all – the footprint and stance, as the CX-9 doesn’t seem to overwhelm its wheel/tire package.

INTERIOR: Mazda offers four trim levels – Sport, Touring, Grand Touring and Signature, starting at $33K and topping out at roughly $45K. The Signature trim is the one to grab, in that it comes standard with Auburn-colored Nappa leather, rosewood accents (supplied by Japanese guitar marker Fujigen), and LED accents. In what we’ve seen of the lineup, plastics and – where applicable – leather are uniformly upscale, but it is the Signature that fully sets the CX-9 apart from the Highlanders and Traverses of the carpooling world.

We were also taken by the front seats. For the first time in a Mazda, low-rebound high-damping urethane (still with me?) is used in both the front seat backs and seat cushions. The intent is to supply the driver and front passenger with an appropriate amount of road feedback, without so much feedback as to be punishing. Along with great front seats is a very generous second row with fore-and-aft adjustability. And behind that is a 2-person pad fine for anyone under 5’5”.

UNDER THE HOOD: The new CX-9 turns the powertrain page, offering Mazda’s first application of a turbo on its 2.5 liter DOHC four. The new engine delivers 227 horsepower on regular unleaded (250 on premium) and 310 lb-ft of torque. That is a bunch of torque, and ups the CX-9’s towing capability from 2,000 pounds to 3,500 pounds. Delivering that power to either the front or all wheels through a 6-speed automatic, we liked its responsiveness in normal driving, and liked it very much when the ‘sport’ button is engaged. In ‘sport’ throttle tip-in seems more immediate, and the somewhat large platform suddenly drives smaller.

Despite the beauty of this action-packed four, there’s still an argument to be made for a nicely efficient, understressed V6 or capable turbocharged diesel. Mazda’s been floating the diesel idea – for installation in the Mazda6 – seemingly forever. If and when they do pull the trigger its availability in the CX-9, giving the 3-row CUV additional range and a bump in towing capability, would be a no-brainer. But that’s an ‘if’, and probably a 3-row ‘if’…

If wanting to step up to a luxury CUV without incurring the costs associated with luxury CUV ownership, we think Mazda’s CX-9 is a logical choice within an emotional decision. Have at it – emote.

Also, Check out more News and Reviews on Mazda vehicles »