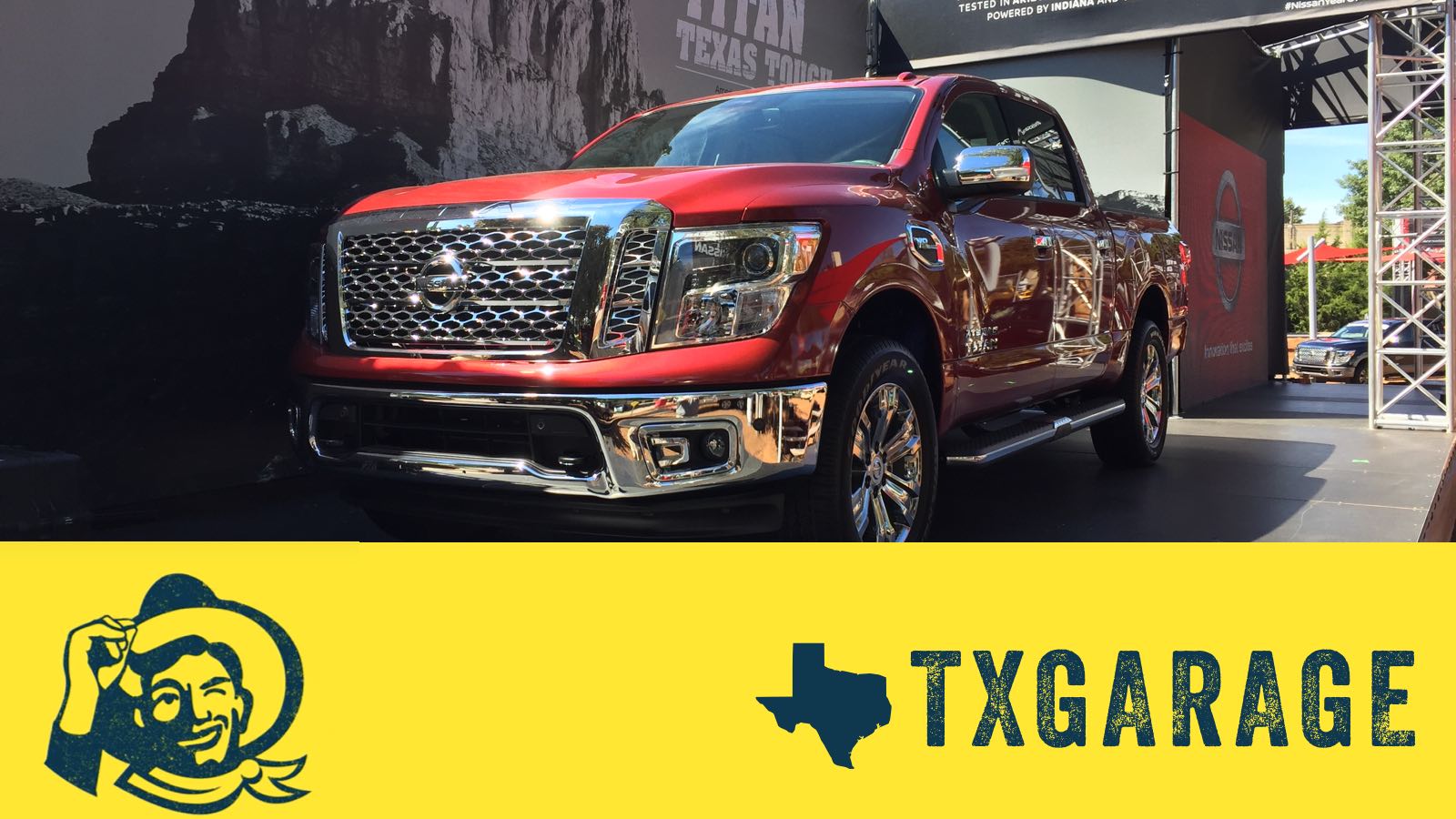 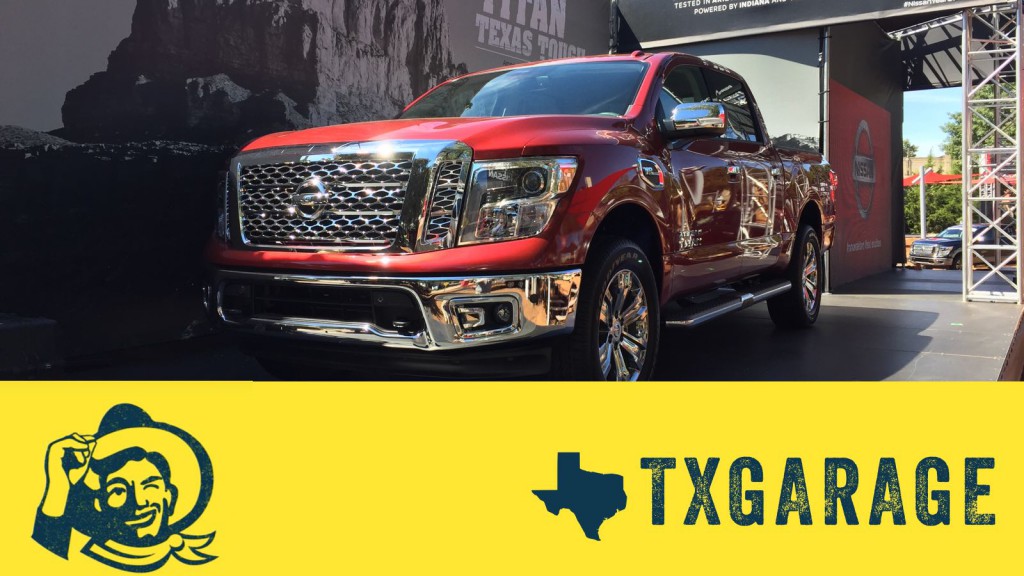 Nissan is taking a Titanic (sorry…ed.) approach to their appearance at the 130th State Fair of Texas in Dallas this month, starting with the unveiling of a new special Texas Edition Package for their 2017 Titan truck lineup at the media preview day this past week. The debut of the Titan Texas Edition was the first step in greeting Big Tex as Nissan honors its commitment to both Lone Star State truck owners and the iconic State Fair of Texas.

Titan Texas Edition Package
In introducing a first-ever special edition package for their new Titan XD and Titan pickups, Nissan’s Fred Diaz said the “Titan XD was named Texas Truck of the Year last fall by the Texas Auto Writers Association, so it’s fitting to acknowledge the Lone Star State with this special vehicle. For native Texans like myself, the Texas Titan is the perfect representation of Texas attitude – big horsepower, big torque, huge capabilities.”

The new Texas Titan package offers a range of custom appearance features including a special chrome grille and 20-inch aluminum-alloy wheels along with metallic-finish kick plates, Texas Titan floor mats, chrome exhaust finishers and Texas Titan badges. The Texas Titan package is available in a range of two Titan and four Titan XD Crew Cab grades, including 4×4 and 4×2 drive configurations. Pricing for the Titan Texas Edition Package was not announced at the unveiling.

Nissan Upsizes
In addition to debuting a Titan truck package exclusive to Texas, Nissan is further celebrating its special relationship with the Lone Star State at the State Fair of Texas by offering free parking for pickup trucks, a meet-and-greet with Heisman Trophy winners, and an opportunity for attendees to take home the ‘Titan of Texas” title by competing for the best time on a rugged, Titan-inspired obstacle course and more.

Free Parking for Pickup Trucks
Nissan will be offering free parking for all pickup truck drivers, regardless of make, every day of the fair at the parking lot located at the corner of 2nd Avenue and Ash Lane, just two blocks west of the front gate entrance on Perry Avenue. The parking lot is complete with bigger spaces designed for pickup truck drivers, and will be fully staffed with security and product specialists. Guests will be directed to the Titan Off-Road Experience where they can ride inside Nissan’s new 2017 Titan and Titan XD as they climb hills and overcome obstacles off-road during the Fair.

Titan of Texas Challenge
Every Wednesday through Sunday during the State Fair of Texas, Nissan will be putting the best-of-the-best athletes to the test against past contestants of the TV hit show “American Ninja Warrior” for their share of $65,800 in prizes. The overall winner will receive $15,000 and the title “Titan of Texas”. The challenge course, designed by Adventure Solutions, consists of seven tough and rugged obstacles inspired by the 2016 Nissan Titan XD, including jumping spider, traverse spinning globes, salmon ladder, and the warped wall, among others. Participants can register by visiting www.titanoftexaschallenge.com.

Red River Showdown Meet and Greet
Fair attendees will have the opportunity to meet Heisman Trophy winners Earl Campbell (1977, Texas) and Billy Sims (1978, Oklahoma) and take a photo with college football’s most prestigious trophy during the Red River Showdown this coming Saturday, October 8 from 9:00 a.m. – 10:30 a.m. CT. The Heisman Trophy winners will be signing autographs at the Nissan display, just inside the State Fair front gate.

Klyde Warren Park Viewing Party for the Red River Showdown
At the east side of the Nissan-sponsored Klyde Warren Park (2012 Woodall Rodgers Freeway) in downtown Dallas on Saturday, October 8, Nissan will host a viewing party for the University of Texas and University of Oklahoma match up. For those who do not have tickets to attend the game, trophy winner Billy Simms and the Heisman Trophy will be at the park for autographs and photos, and a big screen will be set up to watch the game. The viewing event will take place from 9:00 a.m. to 3:00 p.m. CDT and is free to the public.

About the 2017 Titan Lineup
The Titan XD Crew Cab is offered with a choice of two engines – the Cummins 5.0L V8 Turbo Diesel, which is rated at 310 horsepower and 555 lb.-ft. of torque; and the 5.6-liter Endurance V8, rated at 390 horsepower and 394 lb.-ft. of torque. The Titan half-ton is available with the new 5.6- liter Endurance V8. Diesel equipped models feature an Aisin 6-speed automatic transmission and V8 gasoline engine equipped versions utilize a 7-speed automatic transmission.

Additionally, Nissan has recently announced that every Texas Titan comes with the best truck warranty in North America. It features comprehensive bumper-to-bumper coverage for 5-years/100,000-miles, whichever comes first and is available on every 2017 Titan and Titan XD.Titan consumer web site: https://www.nissanusa.com/trucks/titan/