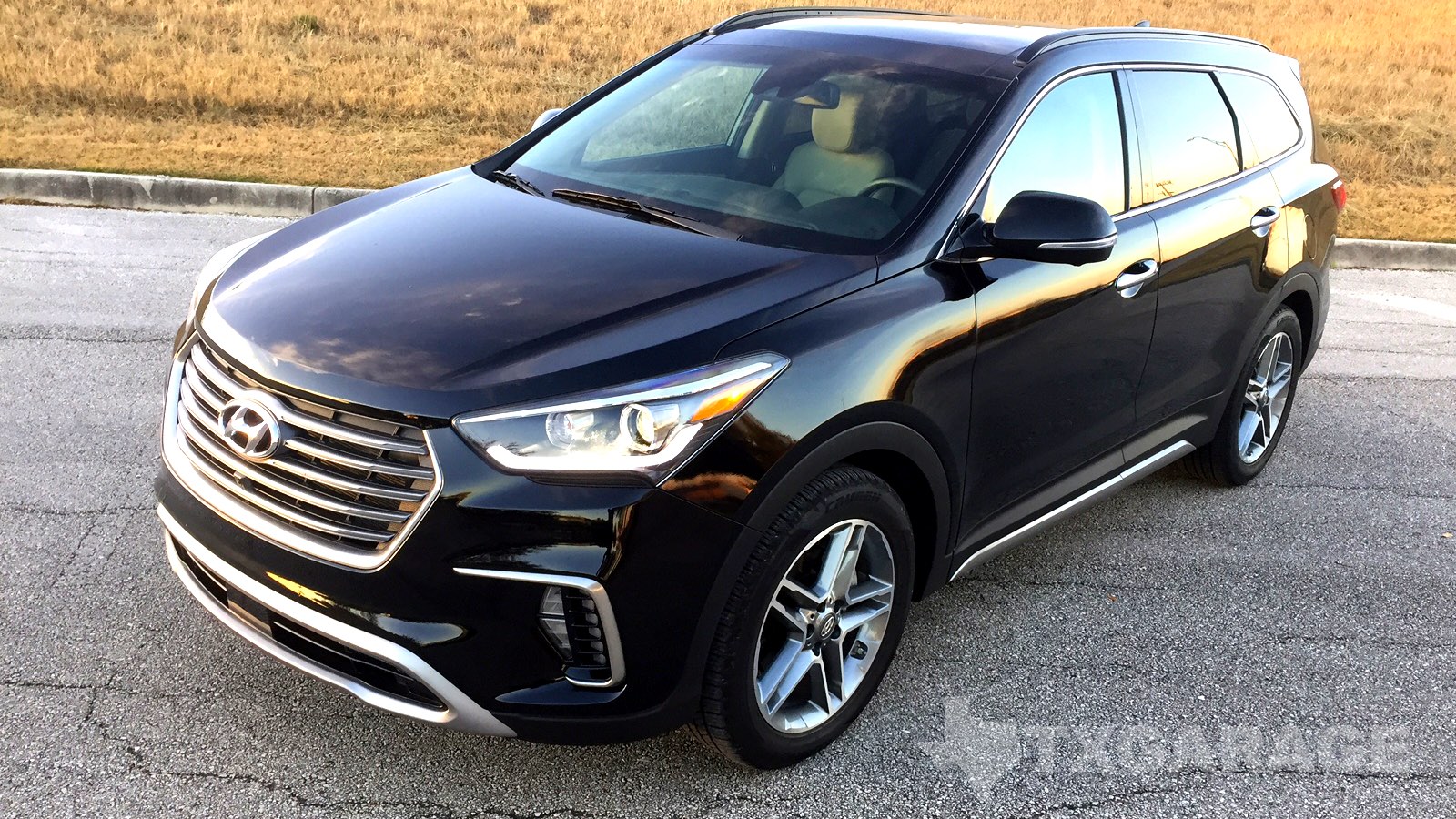 Becoming involved in automotive media means that now all my friends and family members often ask for my opinion on cars. They also ask about automotive trends. One friend in particular mentioned that it was getting more difficult to distinguish an SUV from a crossover. You have compact crossovers, midsize crossovers, wagons that are labeled as crossovers, and full-size SUV’s that are sold as crossovers. There is even a term for it now: CUV (Crossover Utility Vehicle). Now I had the keys to the 2017 Hyundai Santa Fe Limited Ultimate, a CUV – the same vehicle voted Full-Size CUV of Texas by the Texas Auto Writers Association. With a title like that under its grille my first impressions of the Santa Fe were good…but they quickly turned to great. 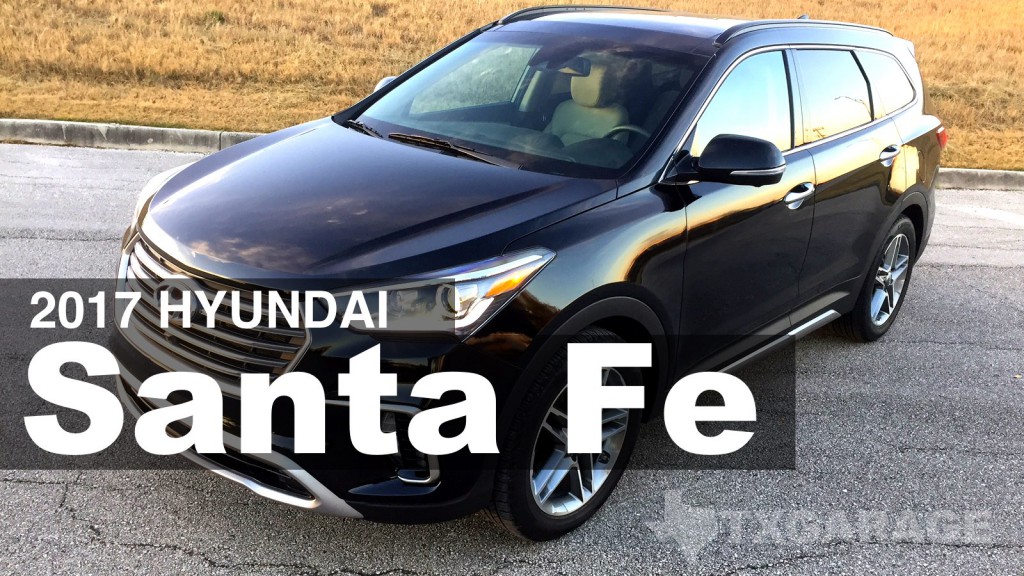 EXTERIOR: For 2017 the Santa Fe received some design tweaks to the front and rear, giving it a more confident, intelligent appearance. Staring at the front end gives you the impression that the Santa Fe looks smug, well aware of its many features and abilities. It welcomes you to hop in to prove its worthiness as a contender in the cutthroat world of crossovers. This Santa Fe came dressed in Beckett Black paint; it’s a nice color, but the lines of the vehicle were lost in the darkness. It made the CUV appear shapeless the second you looked past the front fender until getting to the tailgate. The Santa Fe is not an unattractive vehicle by any means, but it’s not a head-turner, either. However, it’s a handsome design that won’t leave you feeling disappointed when you walk towards it in the morning. The LED accents on the headlights are a nice touch, and the 19-inch alloy wheels make it appear upscale.

INTERIOR: This is where the Santa Fe starts to unveil its party tricks. I appreciated the dark brown accents coupled with the beige leather seats, a nice change from the typical black with tan or solid black interiors. This particular model was the Limited Ultimate, Santa Fe’s topline trim level, so the cabin was a Star Trek Enterprise of buttons and switches aimed to make you more comfortable. It supplied heated and cooled leather seats, and even third-row passengers get their own climate controls. The 8-inch touchscreen displayed the standard backup camera that offers a 360 view of the vehicle. Backing up into tight spaces now feels like playing a video game as you guide the birds’ eye view of the CUV into the space you want. Of course, you can still use your eyes and side mirrors, but this backup camera allows you to double check your work in real time.

A proximity key with push button ignition, surround sound audio system, and satellite radio are just some of the other features you get for your money with the Santa Fe. For visuals, the Santa Fe has a panoramic sunroof that extends to the rear of the vehicle. Match that with second-row captain chairs and the 2017 Hyundai Santa Fe feels like a space cruiser at night. I took the Santa Fe on a road trip to the next town over from San Antonio with friends. They told me the captain chairs made them feel like they were sitting in their own private jet. It provided total comfort with room to stretch and a view of the night sky above their heads as the Santa Fe floated over the Interstate miles.

SPECS: The engine that moves this 4,000-pound CUV is a 3.3 liter GDI V6 that puts out 290 horsepower and 252 lb-ft of torque. All-Wheel Drive is available with the Santa Fe, but the one I was in offered only FWD. The V6 engine allows the Hyundai Santa Fe to be quick on its feet and is surprisingly nimble for its size. Next to the steering wheel, on the left-hand side, you have a DRIVE MODE button which allows you to switch between Normal, ECO, and SPORT modes. On the road, the Hyundai feels light like a sedan and responds quickly when you stab the throttle. (On the highways of San Antonio having a vehicle that can respond to a situation as quickly as you is vital for defensive driving.)

One thing I learned about myself during my week with the Santa Fe is that I am a late braker. I found this out because the Santa Fe’s forward collision alert kept flashing when it noticed a car in front and I had not applied the brakes yet. A feature that is very useful for people with bad driving habits involving smartphones, but annoying for attentive drivers. The alarming beeping noise makes you jump, assuming that the worst is near for a brief second before realizing that it’s just the car being cautious. To avoid this it is best to take advantage of Hyundai’s Smart Cruise Control (SCC) that will adjust its speed when a vehicle is in front to maintain a safe distance, and accelerate back to the speed you selected when it knows there is nothing in front of it.

Gas mileage on the Santa Fe is also good, getting an estimated 17 City and 23 Highway for an average of 20 mpg. During my week with the Santa Fe I was able to average 22.8 mpg, with my highest average for a day being as high as 27.6 mpg!

Pricing for the 2017 Hyundai Santa Fe starts at $30K and travels up through trim levels. The Limited Unlimited shown here was stickered at $42,885.

SUMMARY: There were few complaints with the 2017 Hyundai Santa Fe. Trunk space is next to none when the third row is being used. Forward collision warning alert can give you a pop-goes-the-weasel scare if you like to brake late. Sitting in the third row means being in your own space far away from the rest of the action, which can be a positive or negative, depending on the passenger – or rest of the action.

The thumbs up: Sport mode allows you to have fun while driving six other people around town. The second-row captain’s chairs are first class, and the ‘panamaniac’ sunroof gives you the illusion of space travel at night and wide open scenery during the day.

The 2017 Hyundai Santa Fe is a midsize SUV (or full-size CUV) great for families who have outgrown the minivan car seats, i.e., those families with children old enough to sit still during car trips and can appreciate the features the Santa Fe has to offer.