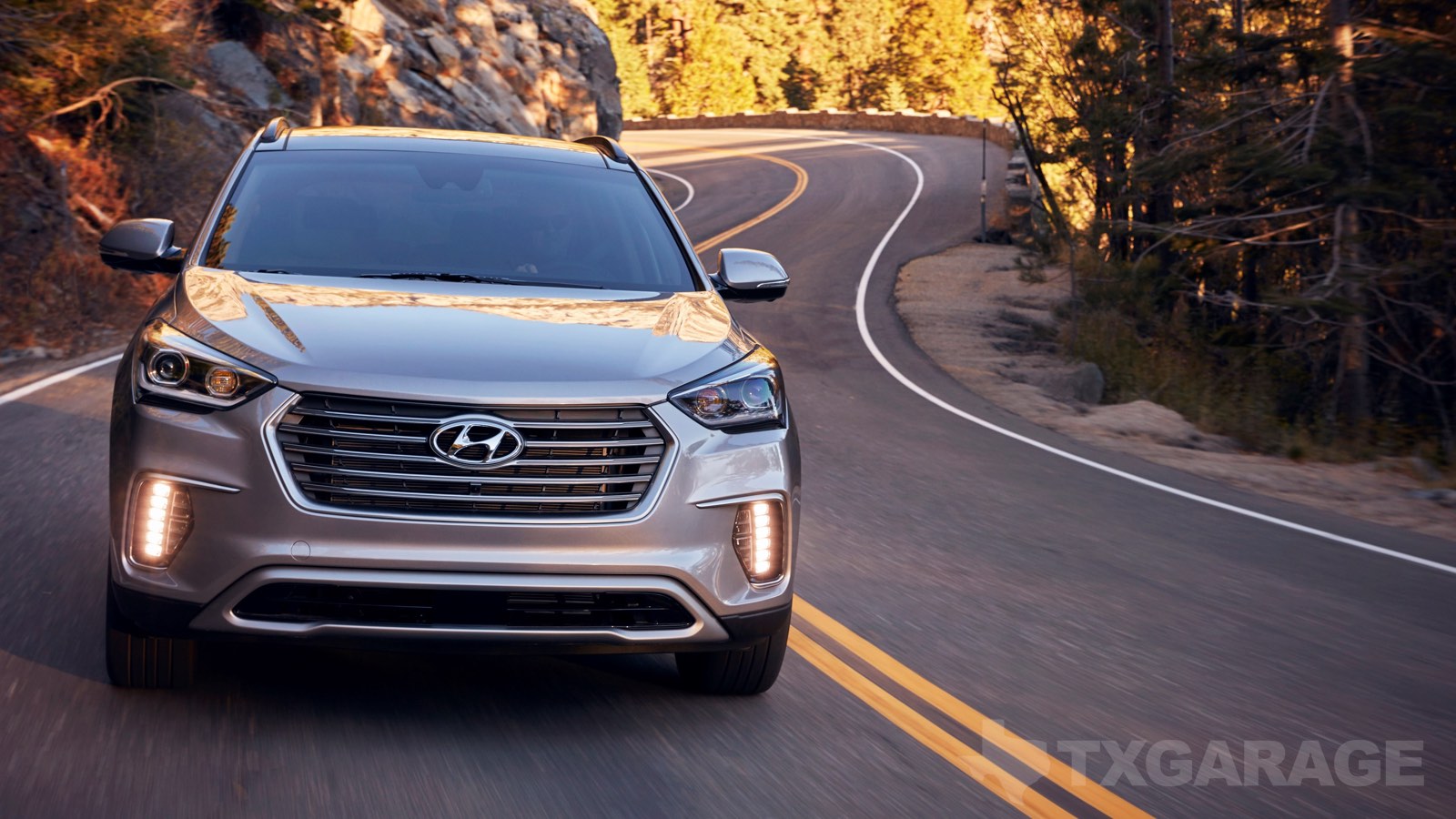 What-the-h*ll did America drive prior to the 3-row crossover? Of course, we had Suburbans and the almost-forgotten International Travelall before and after World War II. But on most driveways and parking lots of Middle America in the postwar years, the 3-row anything was an outlier, not in sync with what Middle America wanted, needed or could afford to fuel. And while the advent of 3-row crossovers doesn’t represent the sea change (or amount of copy expended by general media) autonomous driving would seem to represent, their success is ubiquitous. And Hyundai, with its well-received Santa Fe CUV, couldn’t be happier. 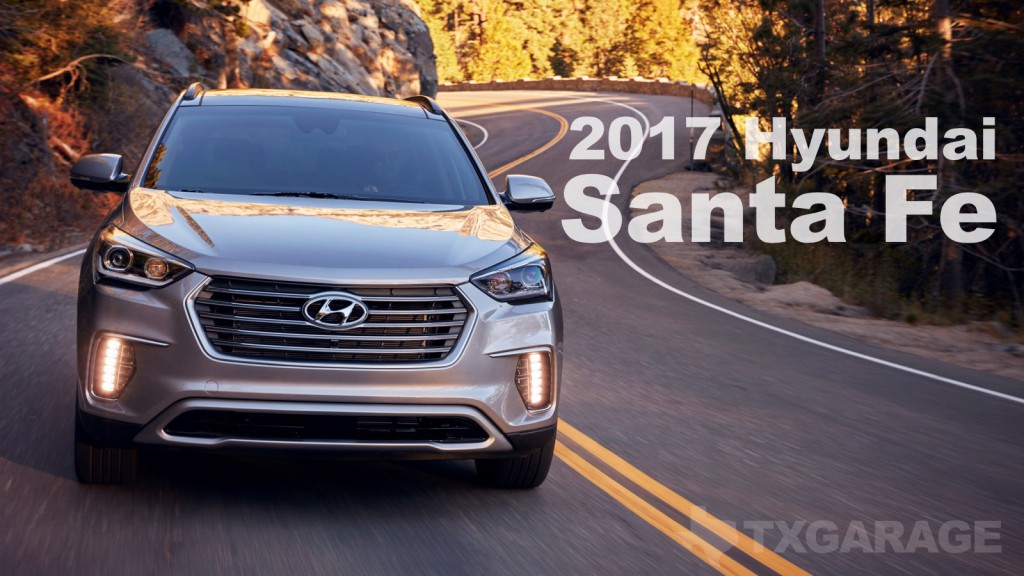 Hyundai’s Santa Fe, recipient of a mild refresh for 2017, attempts to hit the sweet spot in the burgeoning 3-row segment, one in which virtually every OEM – including, most recently, Volkswagen – is aiming. Hyundai employs a two-pronged strategy, offering the 2-row Santa Fe Sport for those young families or empty nesters in need of some utility, but little desire to be overwhelmed by that utility. And Hyundai also offers the long-wheelbase, 3-row Santa Fe.

The Santa Fe Sport occupies a footprint we like, sitting in a segment shared with Ford’s Edge, Chevy’s Equinox and – to some extent – Honda’s CR-V. However, the Sport’s spec is limited to two 4-cylinder offerings, and while the 2.0 liter turbocharged four in the upmarket Sport 2.0T is satisfying, there are those here in Middle America with a strong, abiding preference for a six under the hood and ‘six’ passengers beside and behind ‘em.

EXTERIOR: If the press material hadn’t given a shout-out to the Santa Fe’s ‘freshened front fascia’ we wouldn’t have known. And we wouldn’t have known because – frankly – we haven’t been paying close attention. But no demerits for the Santa Fe’s understated revamp, as it contrasts nicely with the overtly-aggressive mojo of what’s coming – and to come – from Toyota, Lexus and – to a lesser extend – most carmakers targeting Millennials. To the freshened front is an ‘enhanced’ rear fascia, redesigned alloy wheels in three diameters, and newly available LED daytime running lights and fog lights.

What hasn’t been significantly altered is the general tightness – and rightness – of the Santa Fe footprint. This is not a small vehicle by any stretch (pun intended), but neither does it overwhelm in the driveway or at the Safeway. The width and length make parking in tighter spaces possible, if – for me in a borrowed press car – improbable. And while you wouldn’t call the Santa Fe’s handling dynamic, well, ‘dynamic’, it seems to drive slightly smaller than it is, while we find many in the category – such as Nissan’s refreshed Pathfinder – driving larger. In short, the Santa Fe, both visually and dynamically, seems a rational place for either the family or empty nesters living close to their grandkids to run errands, commute to work or take the longish holiday.

INTERIOR: Please be seated. Our Limited Ultimate AWD Santa Fe was fitted for six, and while some might argue against two buckets in the middle row rather than room for three (and supplying a total capacity of seven), in our week with the Limited Ultimate AWD (LU-AWD?) we rather liked the flexibility and adaptability. You should know going in, though, that the 3rd row will be kinder and gentler to those under 15 than those over 50. A lunch hour for an adult would be OK. Grabbing lunch at a diner 700 miles away, though? You should probably take Southwest…

With that, the accommodation up front, sitting atop perforated leather, reminded me of sitting in an old Benz when that old Benz was new. The seating is so inimitably Teutonic you’ll want to grab the lederhosen and put an Oompah band in back. And the seats are easy to access, very supportive, and will hold you in place for anything you’d want to do behind the wheel of a 3-row crossover. For me and mine the front would almost close the deal.

For info, the gauge cluster is informative and relatively traditional, you can still change radio stations or frequencies without going through a 12-step program, and the general vibe is one of serviceable utility. The only discordant note is sent by what Hyundai might euphemistically call ‘wood’ accents mixed-in amidst the omnipresent plastic. While this opinion is entirely subjective, the stuff is gawdawful. If an ugly tree had actually been killed in the application of this I might forgive it; instead, we’d guess only an ugly photograph was sacrificed. Regardless, the interior team should be forced to spend a week – 24/7 – in Mazda’s new CX-9, and then be denied sleep until they get it right.

DRIVETRAIN: Propelled by a 3.3 liter V6 connected to a 6-speed automatic, the combo may not max out efficiency (EPA estimate of 17 City, 22 Hwy. and 19 Combined), but goes about its business with a competence many in the category – connected to CVT transmissions – can’t match. Our testing of the all-wheel drive system was limited to wet weather, no snow nor ice – but the system operates as if ‘no drama’ Obama had spec’d it for the First Car. If you prefer your powertrain to be more visceral, consider the turbocharged Santa Fe Sport. You’ll give up the third row, but your four – if enthusiasts of going moderately fast – will all be smiling.

OWNERSHIP: At a suggested retail of $44K, the Santa Fe Limited Ultimate All-Wheel Drive is not without credible competition. If pursuing a 3-row with a lot of equipment we’d have to consider Mazda’s CX-9, along with the Kia Sorento, redesigned GMC Acadia and – possibly – a CPO (Certified Pre-Owned) Acura MDX. But if wedded to a Hyundai store, I’d opt for a well-equipped Santa Fe SE, adding the Premium Package, cargo tray and floor mats for a window of just over $36,000. Figure that you could negotiate your way to something around $35K out the door – and you’d have one very fine ride driving into the New Year.