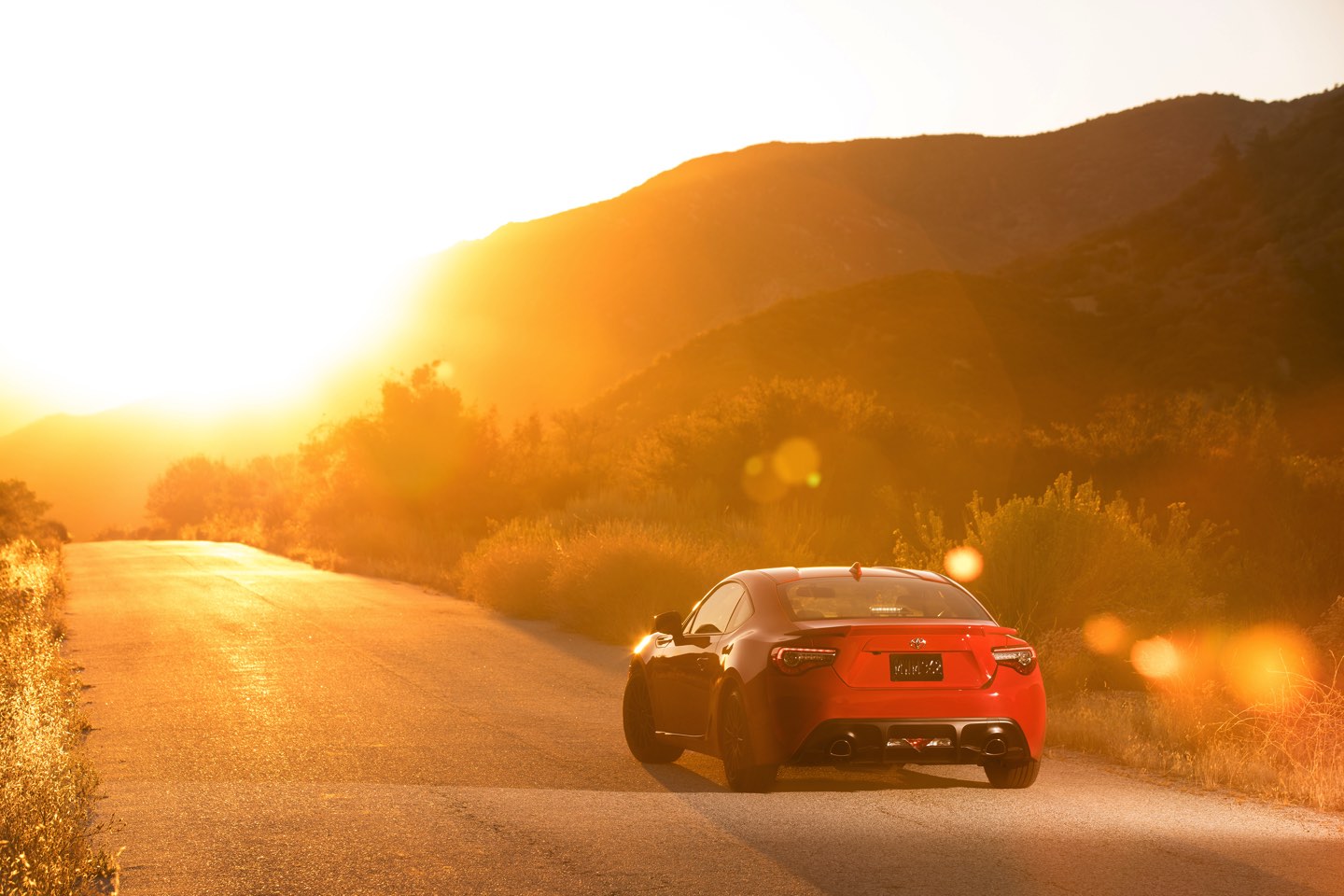 We recently had the opportunity to borrow a 2017 Toyota 86 for a week long test and demonstration drive for a colleague interested in buying one. He wanted to buy the manual version, which most dealers do not have in stock (What? Ed.), so we made arrangements to get one to evaluate with him.

For quick reference, the Toyota 86 is the former FR-S from the Scion brand of Toyota, offered from 2012 to 2015. When Toyota shuttered the Scion brand they carried a few key vehicles over to the Toyota brand, including the FR-S. Other than changing the name to ‘86’ in 2016, they did not mess with the success of this nifty sports car’s simplicity of design, comfortable interior, precise open-road handling and responsive powertrain, all delivered for under $30,000. And, as we discovered, they have made it even better for 2017 with updated cabin styling and a more responsive performance suspension, plus a horsepower and torque boost for the manual gearbox (6-speed) version. Best yet, it still prices well under $30,000.

Evaluating the ‘86’
Toyota loaned us the 2017 ‘86’ six-speed manual model in a handsome Lava Orange with Black interior. The MSRP was $26,255 – plus prep and delivery of $865 – for a total of $27,120. The six-speed automatic prices a tad more, at $26,975. There are no packages and only a minimal set of accessories offered. For night or inclement weather driving, we would have added the HID LED Wide Angle Fog Lights for another $599, bringing the delivered price of the manual gear box model to $27,719.

Cutting to the chase, our colleague started grinning when he got in and never stopped as we raced through the hills and canyons of the Hill Country west of Lake Travis for the next four hours. He was impressed – as we have been – at the smooth ride, very supportive seating, lots of leg and head room, terrific handling with crisp steering and simple yet very complete controls and visuals. And yes, the upgraded 205 horsepower and 156 lb.-ft. of torque from the sturdy 2.0L flat Boxer engine was impressive. The extremely well integrated manual six-speed gear box – with just about the smoothest throw we have ever driven – delivered every bit of the performance we expected from the ‘86’. And yes, he ordered one the next day.

The ‘86’ logos are prominently displayed on the front fender and more subtly inside the front headlights. The unique ‘86’ badging continues on the inside, accenting the new ‘Granlux’ (a soft suede-like material) on the instrument panel surround. The same touch is found on the door trims, while a new seating material with Silver accent stitching, a revised steering wheel with audio controls and ‘86’ logo, aluminum sport pedals and scuff plates complete the look. 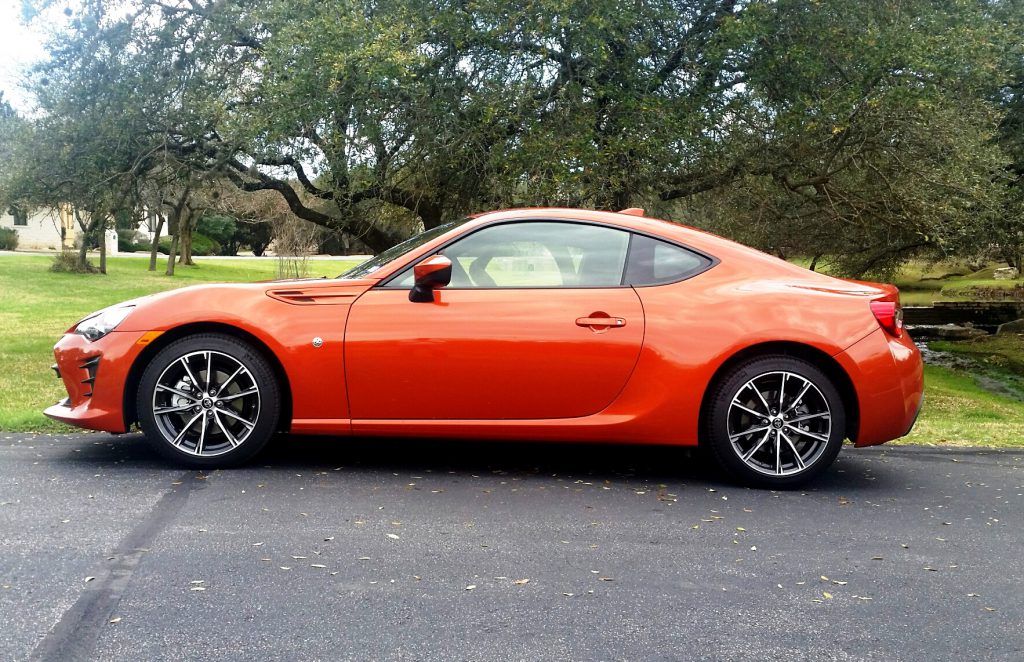 Powertrain Performance
Weighing in at just 2,774 pounds (six-speed manual transmission), the 86 is among the lightest sports cars on the market. Enhanced control and agile performance are achieved through revised shock tuning and a spring rate change. The additional performance of the manual version of the ‘86’ comes from a differential gear ratio change, along with revised engine tuning that increases the torque by five lb.-ft. and adds five horsepower to the drivetrain.

The 2.0L aluminum boxer engine delivers 205 hp at 7,000 rpm and 156 lb.-ft. of peak torque at 6,400 rpm. Its fuel injection system combines direct injection and port injection technologies to produce 100 horsepower per liter of displacement. The direct system cools the cylinders, allowing the engine to optimize the 12.5:1 compression ratio. Coupled to the Boxer is a six-speed manual transmission with short-throw shifter and easy-effort clutch that makes driving this beauty nearly ‘automatic’.

Its standard Torsen limited-slip differential maximizes traction between the rear wheels when cornering and, for track or autocross, the Vehicle Stability Control (VSC) can be put in Track mode or shut off completely.

With all this performance, the manual gearbox equipped ‘86’ delivers fuel economy of 21/28 mpg city/highway and 24 mpg combined.

The Cabin
From the cockpit, the driver enjoys intuitive controls to keep his or her focus on the road (and not on the frickin’ phone – Ed.). Accented by simulated carbon-fiber trim, a large center-mounted tachometer with integrated digital speedometer and programmable rev indicator is the focal point of the instrument panel. On the left is an analog speedometer, while fuel level and temperature gauges are to the right of the tachometer.

Though technically the ’86’ is a 2+2 configuration, the realism is that the second-row seats are storage. To that end the rear seat back folds down to expand the trunk space.

2017 Mazda6 Grand Touring: Go Ahead – Judge It By Its Looks
2017 Chrysler Pacifica: This Is Big
Event Calendar