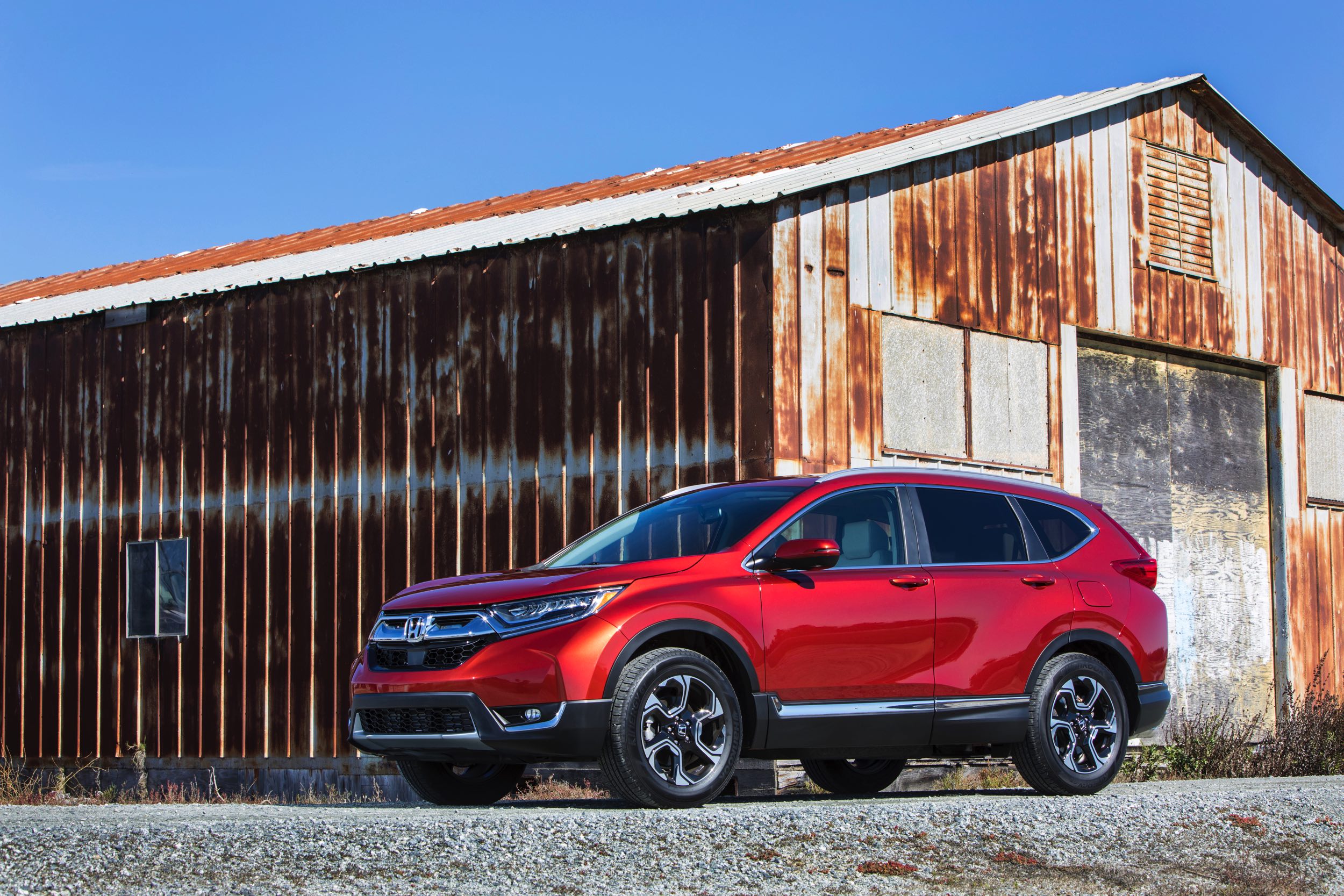 The good news: this isn’t the newest Lamborghini we’re reviewing here. Aside from a little tire kicking (taking place – admittedly – over some fifty years) I have little knowledge of, or perspective on, Lambo ownership. The better news: while having never owned a Honda CR-V, my parents, over almost a quarter of a century, purchased four CR-Vs, and bought them for all the right reasons. With that as background, I’m spending a week with Honda’s latest (and possibly greatest) CR-V, and I think Dad would be pleased.

‘New’ or ‘all-new’ are the most hackneyed descriptives in the automotive book of descriptives. But in describing its 2017 Honda CR-V as ‘all-new’ Honda’s marketing team would seem to have hit the nail on the head. From stem to stern the Honda’s newest compact crossover is redesigned, boasting a larger footprint, all-new sheetmetal, its first (in my dim memory) optional powertrain and – as the press release suggests – an unexpectedly upscale position in the crossover marketplace. We picked, we poked and we prodded. And – of course – we drove it.

EXTERIOR – Here’s my highest compliment: they didn’t screw it up. This is a more substantial vehicle relative to its predecessors, but its footprint doesn’t overwhelm you. And the sheetmetal, while offering an organic curve here, a more aero-sensitive windshield and a bejeweled front fascia there, reflects what we’ll call a restrained optimism, without the hormone-injected excesses of Honda’s Civic or (god-help-us) Toyota’s newest Prius. The overall package is something I could like and my mother could love, with room – and we’re getting to that – for the kids.

INTERIOR – Coincidentally, because I’m about 5’6”, the CR-V is also five feet six inches; I was prepared to call it tallish, before I realized it was the same ‘height’ as I am. But the CR-V remains sufficiently tall to allow easy ingress, while the step-in height represents no challenge to anyone but your shortest grandmother. Once inside, the leather-trimmed buckets of our loaded Touring were extremely comfortable and, while we didn’t try them on a long drive, impressed us as very supportive. They were also, on a cold March weekend in D.C. heated but not cooled, and the rear seat offered you nothing but the seat itself.

Beyond the seats, materials are generally more upscale, softer to the touch and benefiting from ‘more intricately stitched seats’. Available features – and included on our top-of-the-line Touring – include a 7-inch Display Audio interface with Android operating system, while ‘big news’ is the return of a physical volume knob. As you’d hope, it’s all compatible with Apple CarPlay and Android Auto platforms, and you’ve gotta’ love its ‘seamless integration’. All of that is something you’ll find completely intuitive if you’ve bought the CR-V; less so if you’re only borrowing it. With that, we’ll continue to prefer Hyundai’s fusion of knobs and technology.

And while still inside, know this CR-V has space – serving almost 40 cubic feet behind the rear seat when that seat is up, and over 75 cubic feet when it’s folded. There isn’t a 3rd row, something the Rogue and Discovery Sport offer, but for a young family or committed grandparents, the CR-V will swallow most of what you’ll throw at it.

As mentioned, under the hood you’ll find both the cooking 2.4 liter four, offering 184 horsepower and 180 lb-ft of torque and – new this year – an available 1.5 liter turbocharged four which, according to Honda, offers ‘exceptional performance’. We’ll beg to differ. The specs – 190 horsepower and 178 lb-ft of torque – are certainly OK, but subjectively the combo of 1.5 turbocharged liters and a CVT fall significantly short of my heightened expectations. Everything’s fine, but our memory of turbocharged Hyundais and Kias is ‘finer’. We were hoping for compelling, and instead got competent.

With an attractive design, optimized practicality and class-competitive efficiency, the CR-V checks its usual boxes. We’d enjoy more torque, a conventional automatic and, when fully equipped, a price point closer to $30K than the as-tested $35K. If you don’t up-spec the tech you’ll get that CR-V for $30,000 – and if in the market for a right-sized family hauler, that’s probably how we’d buy it. Honda’s press release touts premium design, big versatility and a fun-to-drive persona. We think they got two out of three…and at under $35,000, that’s no bad thing.