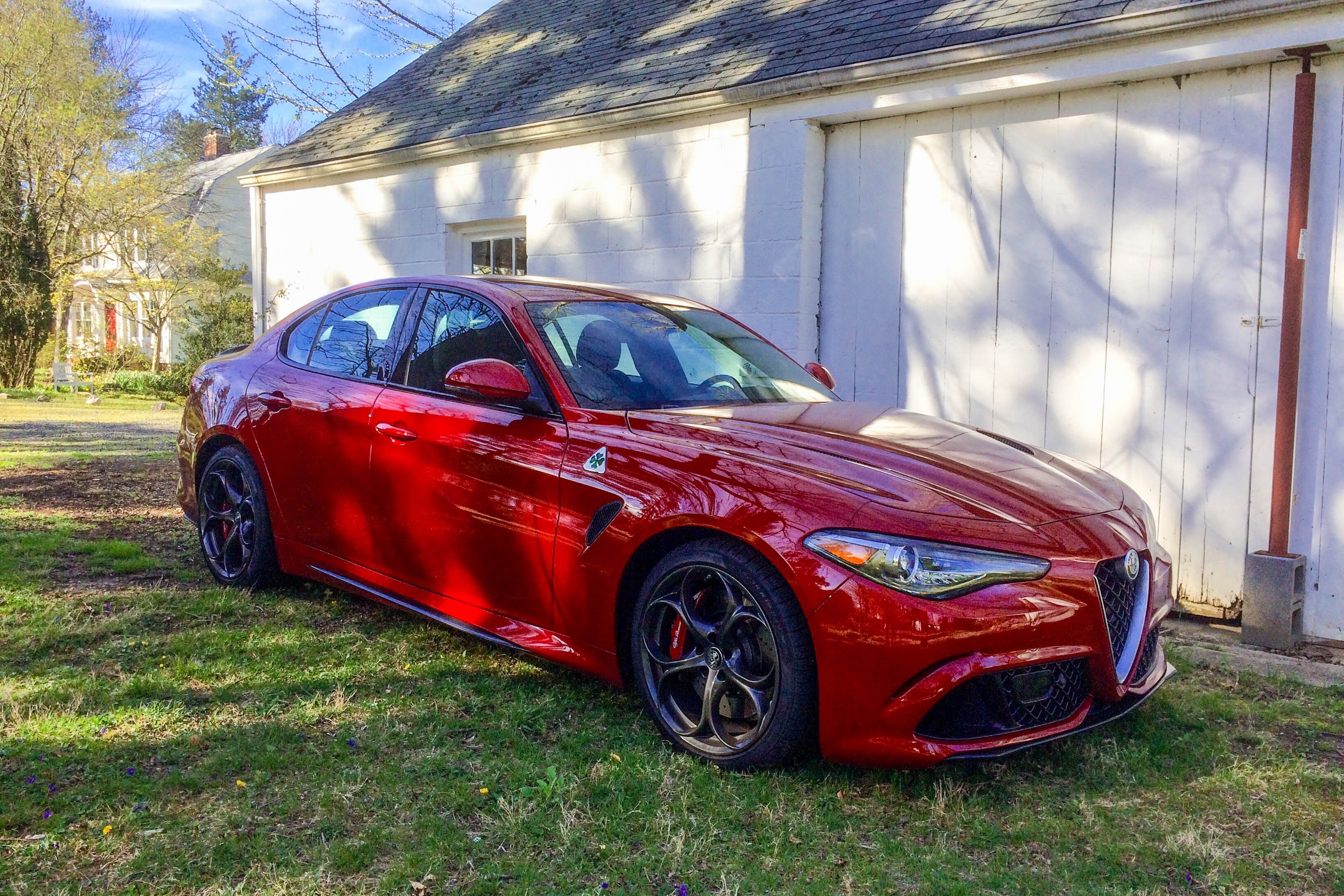 As written for another outlet almost four years ago, I’ve been paying attention to the ‘imminent’ return of Alfa Romeo since Sergio Marchione (Chairman and CEO of FiatChrysler) first raised the possibility, which now seems like forever ago. My personal affection – if not passion – for Alfa dates back even further, having read about Alfa Romeo as a kid in the books of Ralph Stein and in the pages of Road & Track. My personal interest evolved with the purchase of an Alfa sedan in 1976 (a leftover ’74 Berlina), and a new Spider at the end of ’82. And while neither ownership period was particularly long, the visceral experience supplied by Alfa’s 2.0 liter four, in combination with the overall competence of the platforms, provides an occasional smile (OK, my wife Tina didn’t smile…) over three decades later.

The stated reason for the delay in returning Alfa to the U.S. was commendable. The FCA team wants to ‘get it right’, and we wouldn’t disagree. As the manager of an Alfa showroom in the late ‘80s I was witness to the marketing mayhem brought by the ill-conceived Milano and the continued Band-Aid fixes applied to an already-aging Spider. But in taking the time to create an Alfa appropriately upmarket, with a new rear-wheel drive/all-wheel drive platform and updated powertrains, the Fiat brain trust has allowed time for sedan prospects to effectively abandon sedans.

Thankfully, in the guise of the Alfa Romeo Giulia and its Quadrifoglio offshoot, Alfa Romeo has a 4-door that doesn’t request our attention – it absolutely demands it. From its almost sensual bodywork (Ed Sheeran has written a song…) to exquisite dynamics and explosive powerplant, the Quadrifoglio – Italian for 4-leaf clover, pronunciation is your problem – ups the ante in the 4-door sport sedan hierarchy overnight. And as a Car and Driver comparison recently confirmed, pitting the Quadrifoglio against BMW’s M3 and Benz’s AMG C63S, the Alfa is not just competitive against these two segment benchmarks, it beats them. 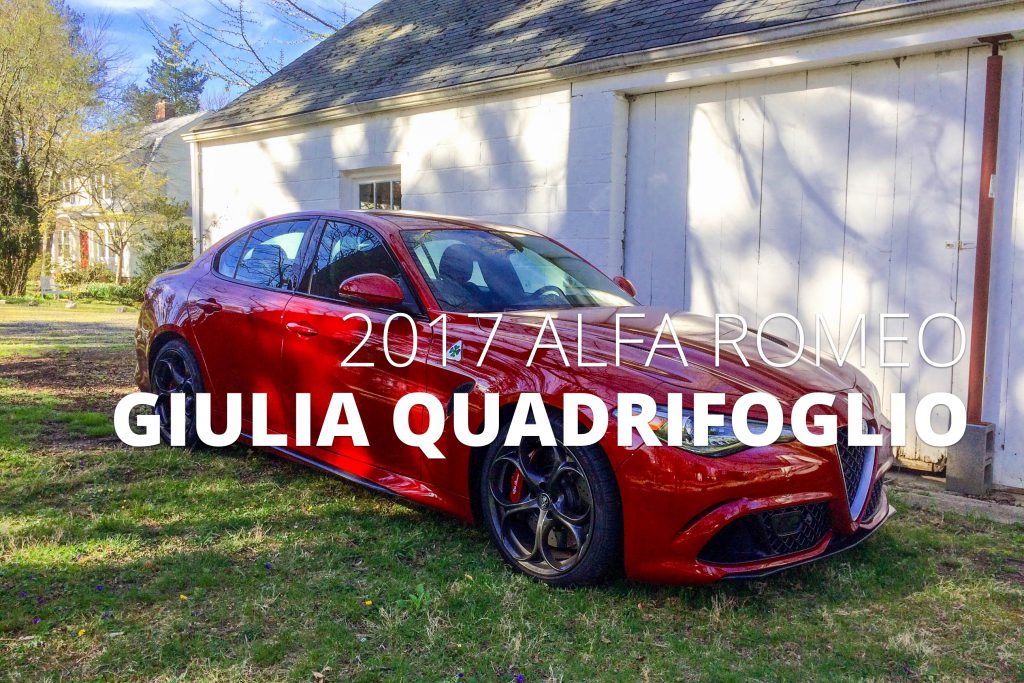 EXTERIOR: I had no idea the grille of an Alfa Romeo could be disliked, but two friends – in seeing pics of the Quadrifoglio – immediately dissed the Giulia, based solely on its face. And we love the face, tucked in tight and looking like a slightly puckered lip. On Alfa’s older Spiders these were ridiculously vulnerable to both parallel parking and distracted driving – and this before texting! But in a sea of automotive faces attempting to look distinctive, there’s something reassuring in a brand’s face that looks only like that brand. Further, the beauty of this face is that it’s integrated into the vehicular whole, and not slapped onto a shape singularly out of shape with the designer’s initiative.

The balance of the 4-door Giulia (and its Quadrifoglio offshoot) employs a conventional sensibility, not differing greatly from what BMW serves up in its 3-Series. And to that end, some might describe the Alfa as generic, but I like its lack of gimmickry. Even the Quadrifoglio, with its aero adds, comes across as what we used to call moderate Republican rather than wild-eyed zealot. With that, know that the Giulia and its more expressive offshoot won’t be ubiquitous, regardless of what Mr. Marchione might hope. Alfa has historically been a niche brand, and that won’t change with the launch of the Giulia. 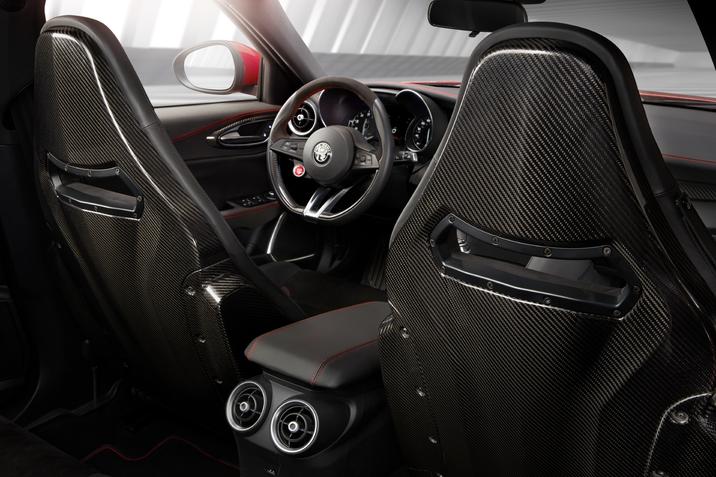 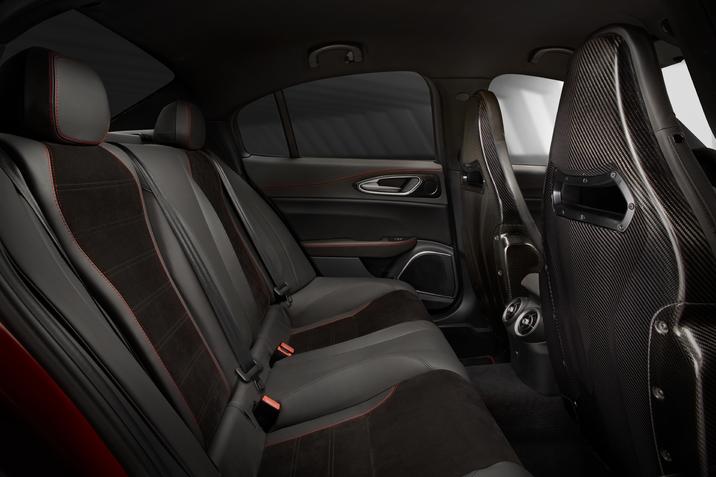 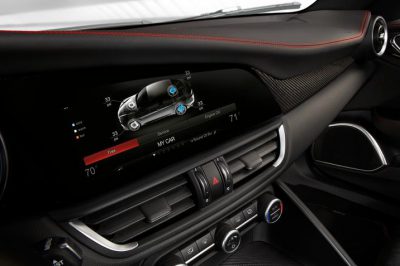 INTERIOR: Access to the front seats is perfect, while fullsize adults will feel slightly violated as they attempt to slide rearward. Up front, the trackday-specific buckets will hold you in place, but – thankfully – don’t suck you in place. There’s room to breathe or, if you’re the luckless passenger riding with Speedracer, room to squirm. Despite the Italian industry’s rep for not-quite-right seating positions, the Giulia’s positioning had this driver feeling fairly normal…not easy when you’re not normal. The wheel is perfectly sized and shaped, the view of the instrumentation is unobstructed, and when positioned properly you’re given a good view of what’s around you.

Our only disconnect is with Alfa’s decision to go to the Best Buy outlet for its infotainment. The info’s okay, but we were less impressed by the visuals. The rear camera screen is so small as to render it irrelevant, and the whole thing – while integrated – has this aftermarket look to it. Hyundai does this so much better, with a completely intuitive blend of real knobs and digital actuation. We’d ask Sergio to visit a Hyundai showroom before the Giulia’s obligatory refresh.

THE DRIVE: So, you have 505 turbocharged horsepower from a 2.9 liter V6, and that V6 is closely related to a Ferrari V8. How do you think it’s gonna’ drive, Citizen? If you want to be stupid, or (better) have access to a private motorsport park and can afford the replacement rubber, this is the platform to explore your personal limits. Acceleration will distort your face like those old Air Force films, while braking will mix things up better than a daily probiotic. It is, in a word or two, a personal extension of your automotive hopes and dreams, sitting atop a world class platform devised by a world class team. And while we hate to stereotype, this is what Italians do, whether devising the next Ducati, Ferrari or – happily – Alfa Romeo.

Special praise has been heaped on the Giulia’s steering; I’ll second that. It’s perfectly weighted, amazingly linear, and without even the suggestion of a dead zone, unless steering your Giulia into a tree. Alfa’s DNA control (cute, huh?) adjusts your excitement levels to better correspond to surrounding traffic, and then there’s Race mode, when you want to play the race card. And for most traffic – even traffic in the D.C. ‘burbs – we played the ‘Race’ card.

The hidden figures? The 2.9 liter V6 443 pound-feet of torque. And the torque’s sweet spot is between 2500 and 5500 rpm. We’ve always regarded paddle shifters as akin to the kid’s Christmas gift; you play with it intensely for two weeks, and then leave it all but forgotten in a closet or under the bed. We didn’t forget the Alfa’s paddle shifters, as within the gauge package you’re reminded the paddles are the best way to navigate ‘Race’ mode.

SUMMARY: The ‘cooking’ Giulia or higher-spec Giulia Ti will run you between $40K and $50K. At that figure it slightly undercuts a 3 Series BMW or the Mercedes C-Class. And while we doubt it will enjoy the resale of the BMW or Benz, there’s more to life, kids, than return on investment; there’s life itself. And few things will maximize the daily commute better than Signor Marchione’s Alfa Romeo Giulia.

In Quadrifoglio form, at around $70K, the competition is more ill-defined. Car and Driver judged it to be a competitor to the M4 and AMG C63S, but we’d broaden that set to Porsche’s Cayman, Jaguar’s F-Type and any late-model 911. This is a car that, despite its 4-door profile, absolutely rips up the spec sheet of comparably priced sports and GT cars. And if you don’t want to drive something with four doors, just don’t use those rear doors, forgawdsake.

It will be an all-too-frequent refrain among Alfa owners: I’m in love with the shape of you…