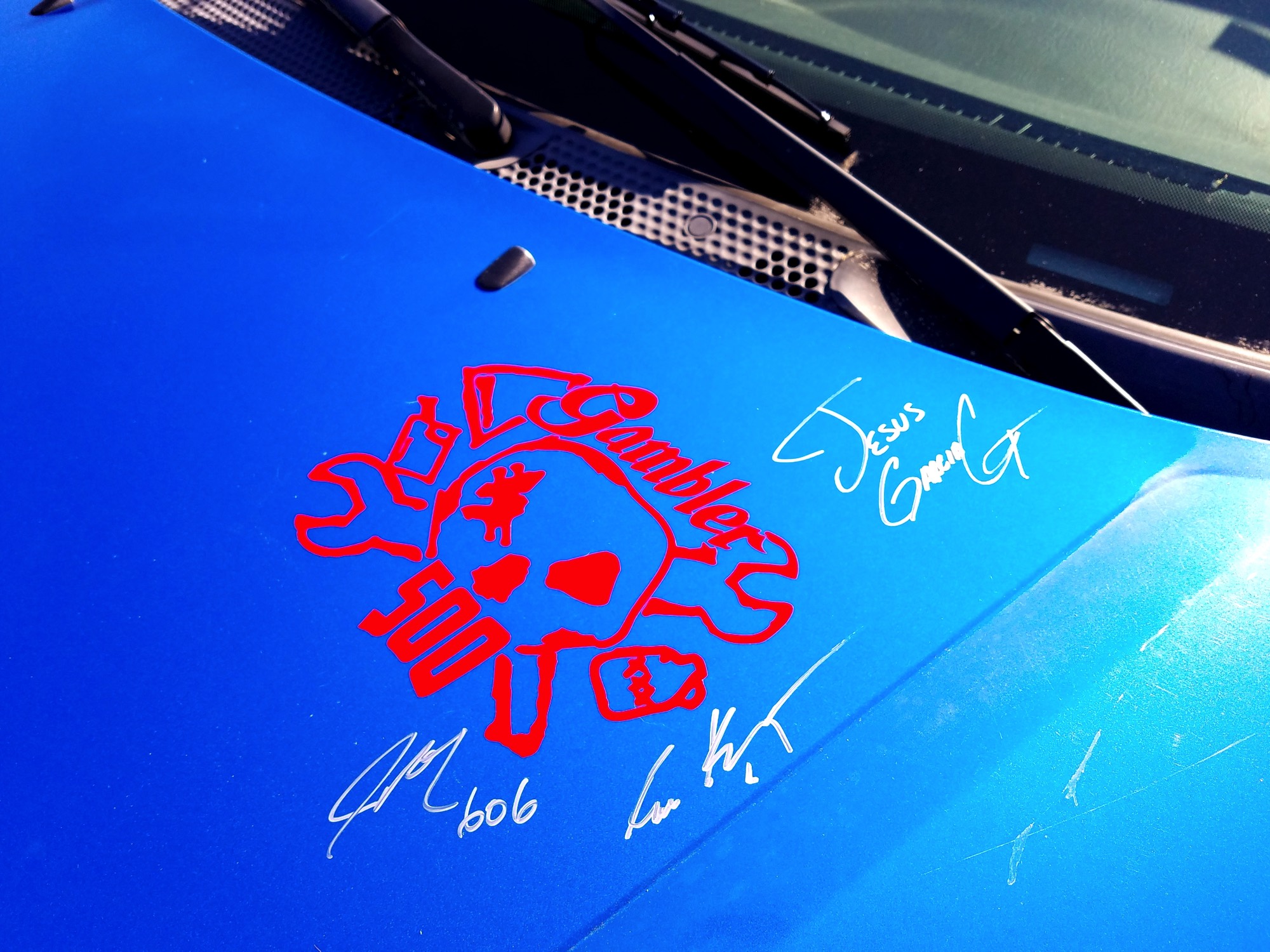 “It’s not a race, it’s a challenge.” That’s a quote taken from the 1976 Gumball Rally. And let me set the record straight: the Gambler 500 is not – I repeat, NOT – a race or a timed event. This is a navigation rally designed to show you the Oregon landscape while having road trip fun in a wacky car with friends. The gamble comes from showing up to the start line in whatever road-legal vehicle you can piece together that can survive 500 miles over a two-day event. The Gambler 500 is Wacky Racers meets Family Vacation at the start of the 24 Hours of LeMons. A motoring event unlike anything you’ve seen.

How I ended up in Portland, Oregon on the eve of the Gambler 500 is a story that took a year in the making. It all started when I randomly came across a Facebook video clip of last year’s Gambler 500. It showed a bunch of wild cars and trucks being taken off-road with big smiles all around. I shared it, saying I would add it to my bucket list. One friend agreed, and meant it – Jeremy Mahovlich, a friend from Vancouver, Canada that I met on Twitter. Jeremy was one of the first people I asked for advice on getting into the automotive media racket in 2014.

At the start of 2017 he tagged me on another Gambler video, asking if we should actually do this rally. I said yes, but in the same way, friends agree that they should open a bar together; we were sincere, but with no real plan to actually go through with it. I didn’t think I would actually be at this event until he showed me the photos of the car he and Ron Kertesz, the ‘Rabid Beaver’ team co-driver, had bought at the auction. Soon as I saw the car in Jeremy’s driveway I started looking for flights online.

Our vehicle is a 2002 Ford Focus ZX3 hatchback – aka ‘Red Beaver’ – with a 5-speed manual that Jeremy picked up for $600 bucks. After a mild tune up of new spark plugs, fluids, and an air filter the car was given spacers to add ground clearance. The wheels were painted white and an Amazon Prime-ordered light bar was dressed on the grille. Jeremy and Ron created a spoof livery on the Red Bull rally car of the same era. (Points for creativity!) I had no idea how the car was going to look until I saw it at 11:00 the night before the race. And seeing my name on a professional looking rally car was a really good feeling. 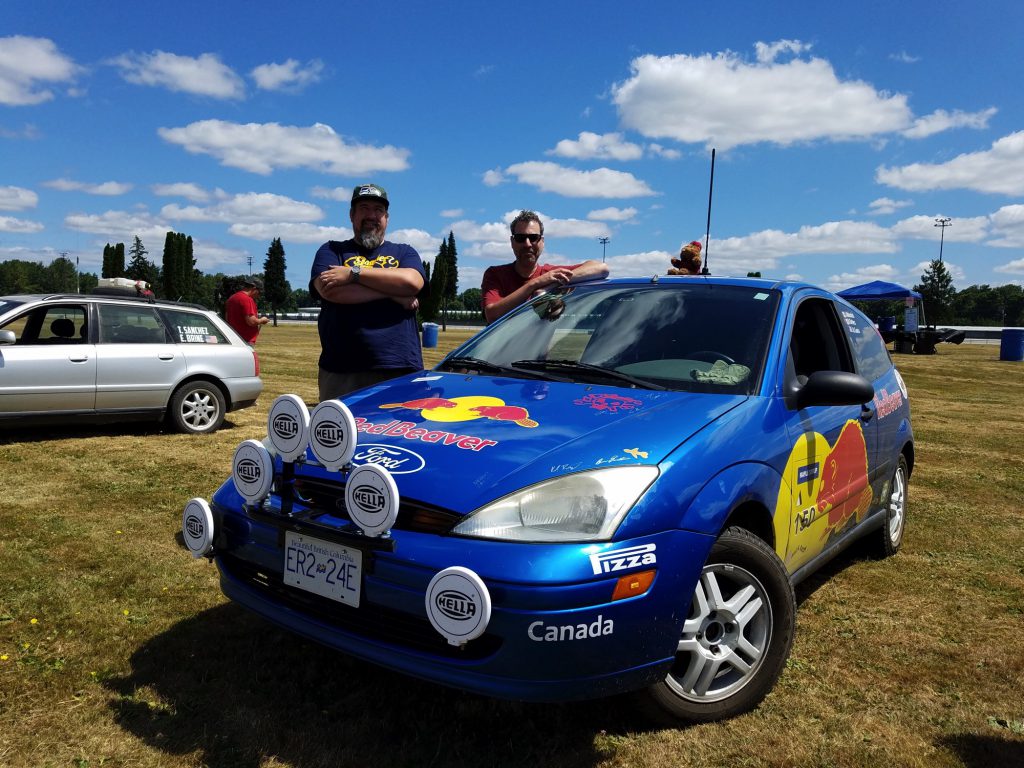 A SYMPHONY OF MISFIRES

The start of the rally was a symphony of sputtering exhausts pipes, squeaky fan belts, and rough idling engines. Hood slams echoed as gamblers pushed their heaps to the start line. This was the fourth running of the Gambler. In previous years attendance was small. Around 40 teams entered last year, but thanks to social media a record setting 300 was expected to show up at the Portland Meadows horse track to start gambling. We arrived at 8:00 am and saw that over 700 teams had showed up!

When Team Rabid Beaver set off it was 11:00 am, and we were the 721st car to leave the starting point. We were given a paper with a list of GPS coordinates to different way points toward the overnight checkpoint. Each waypoint ranged in road difficulty. Easy ones were just off the highway. Median way points involved dirt roads and pot holes. The most hardcore off-road waypoints were appropriately named “Satan’s B***hole” in terms of difficulty. These required ATV permits and, of course, vehicles that could handle rock climbing.

There were only two rules in the rally: “If you aren’t having fun, go find some!” and “Always be Gamblin!” Enjoy the fun of being the weirdest convoy on the road. Driving through small towns like a herd of renegades. Or play on the CB to live out your Cannonball Run day dreams, while following the unwritten rule of stopping if you see a Gambler on the side of the road. And, of course, we enjoyed the big camaraderie among us as Gamblers. We were all here to have fun and nearly everyone was a first timer so we all shared the experience.

The Gambler 500 was sponsored by NAPA Auto Parts, which gave Gamblers a 10% discount during the race. Also, the Gambler is not a race, so you don’t need to wear crash helmets or invest in a 5-point safety harness. Only things required on Gambler vehicles is for it to be road legal and a CB radio for emergencies since cellphone signals can be dicey in the Oregon country side.

The overnight checkpoint for the rally was a ski lodge near Sister City, Oregon named Hoodoo (Who-doo). By the time the Red Beaver arrived the ski lodge was completely full and we had to park in the street along with several dozen other Gambler teams.

The scene was wild. Crazy cars littered the parking lot with tents and camps set up around them. Alcohol vendors were on the scene handing out samples and by 10 everyone was holding at least one sudsy beverage in their hand. Live music echoed as we walked the grounds checking out the cars and observing the crowd. Guns, cars, and music were the only topics of conversation. No politics, no current events. Nothing annoying. There was even a city bus that had been converted into a mobile Tattoo parlor that was opened for business.

What amazed me was that we had over 800 vehicles, with 3 or more people per vehicle. At least 90% of us were new to the event with drinks flowing freely. I didn’t sleep at all that night, mostly because I didn’t prepare for winter conditions in July. Spending the night freezing allowed me to listen and observe the campgrounds. Were we loud? Of course! But all you could hear was talking and laughter. No fighting, no shouting, no foul language echoing in the distance, no dangerous burnouts, and no cops. It was surreal seeing such a diverse group of people spending the night together and getting along. No drama, just civil fun with beer breath.

Naturally, the restrooms were a mess but what do you expect? A few wild cards started setting off fireworks but were quickly shut down (Smokey the Bear didn’t approve). Others who brought bikes were riding up and down the ski slopes in the darkness, while a few college kids danced on the hoods of cars. The point is that all these people showed up and nobody got hurt, nobody was offended, and nobody’s car caught on fire. The planets were aligned in the Gambler’s favor that night.

By 2:00 am most had gone to sleep, except for a few dozen huddled around the bonfire. The band called it a night but allowed anyone to grab an instrument and jam. I couldn’t sleep so I stood listening to the group of strangers play together. They played tunes that reminded me of Link Wray and Dick Dale. Surfer music, exhaustion, and the few beers I had made for some essential thinking while looking up at the stars in the moonless Oregon sky.

JUNKERS FOR A GOOD CAUSE

The end of the rally was back at Portland Meadows, where it began. All cars were able to cross the finish line and park in the horse track infield to create the most outrageous parking lot. Once we were all there the awards were given out. This year’s winner was given to a man who visited all the waypoints in a $500 Honda 500 that he put together days before the rally started.

The cherry on top of the Gambler 500 sundae is the auction held after the awards. At the end of the rally, anyone who wants to sell their ride can do so at the auction and 100% of the money goes towards the Children’s Cancer Association. How awesome is that? Anyone who buys a Gambler car will have an automatic entry for next year’s rally.

RAMBLIN’ FOR NEXT YEAR’S GAMBLE

I was able to talk briefly to T. Cole, founder and organizer for the Gambler 500. My main question for him was how they planned to control the number of Gamblers for next year. A large attendance was a great surprise but things could have quickly gotten out of hand. Cole couldn’t give me a definitive answer, but I assume that ticket sales to partake in the rally will be in order next year. Money will be the factor that separates the real Gamblers from the trouble makers. The Gambler 500 is not a Gumball 3000 or Cannonball Run. They want this to be a family friendly event that focuses on fun and not speed.

I was able to talk to Fred Williams and ask him for a quote on this event. His answer was as accurate as it was funny. “The Gambler 500 is all the people waiting to be extras in the next Mad Max movie.”

After spending two days looking at some of these creative rides I can certainly agree with him. Everyone was friendly, and everyone I talked with was excited to do this again next year. Jeremy, Ron, and I spent most of the time on the road thinking of theme ideas for next year. What kind of car? Livery and costume ideas? How will one decision impact the other? Best road game ever.