For an auto consumer, too many auto shows is a blessing, while too many – for an automotive enthusiast – can be a curse. Not unlike beer that’s watered down, or a movie franchise with one too many sequels, the enthusiast might enjoy more auto shows but is ultimate poorly served by too many auto shows. If you want proof, take a drive on I-35, where you’ll be able to see over a six month period auto shows in San Antonio on the second weekend in November, Fort Worth in December, Dallas in February and Austin in April. In short, too many.

While not sure how this surplus of shows is rated by the automotive industry, I’m guessing Dallas is a ‘B’, San Antonio and Austin rate a ‘C’ and Fort Worth gets – if it’s lucky – a C-minus. And these shows are on top of Houston’s auto show and what is essentially a truck show promoted by the State Fair of Texas. 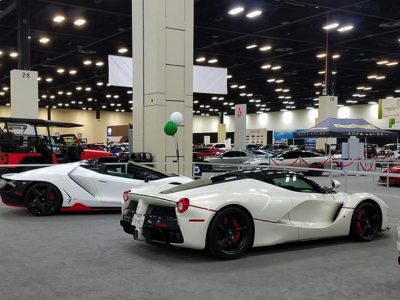 Any show, large or small, requires a huge amount of money to orchestrate and promote. Even if you’re doing little more than laying carpet and parking cars in the host convention center (which is about it in both Fort Worth and San Antonio), the labor costs associated with those two seemingly simple acts are outrageous. Of course, if offering a better show – such as that taking place in Dallas – you also have the costs associated with the OEM displays, shipping of a few (typically older) concepts, and hiring of spokespeople to present product and answer consumer questions. In short, it’s big bucks – even for the small shows.

San Antonio is a big market, growing more substantial by the month. And given that it’s a market sitting near the middle of Texas, area dealers sell a boatload of high profit trucks and SUVs. In that environment you’d think (and hope) the OEMs would step up with attractive displays, along with the occasional concept, to ‘juice’ the experience. But they don’t. Most displays are little more than parked cars, trucks and SUVs, and if OEMs do bring signage it’s the smallest/cheapest-to-ship signage they could find. Car shipping companies provide you with a full range of options, such as relocating, purchasing a new vehicle, or shipping a show car.

Beyond that, some manufacturers don’t even show. In looking at the San Antonio show’s directory, produced by the San Antonio Express-News, the listings go from ‘Bentley’ to ‘Buick’, with absolutely no reference to BMW; BMW – it seems – elected not to participate. Conversely, while Infiniti’s lineup made it into the show guide, Infiniti products couldn’t be found on the show floor! The show organizers weren’t worried, however, as the space was filled by Hyundai’s Genesis.

In my view, it’s time for fewer shows throughout the country, but given the reach of txGarage, I’ll start with Texas. In North Texas I would merge the Fort Worth show with Dallas; if residents of Dallas can drive to Tarrant County for a baseball or football game a few times a year, residents of Fort Worth and its surrounding ‘burbs can drive to Dallas for an auto show. And with the increased attendance, the Dallas show can grow from a long weekend to a full week bracketed by two weekends. You’ll still have the State Fair of Texas in the fall, but the Fair’s people should recognize the obvious and become an all-truck show – for all intents and purposes, it already is.

We’ll also suggest the San Antonio and Austin shows merge. It’s simply too easy for one city’s enthusiasts or consumers to drive to the other city’s convention center, and since San Antonio is the larger market we’d give it to them. Perhaps Austin can maintain a tech-centric automotive connection via its SXSW festival, or promote a ‘Festival of Speed’ in partnership with COTA, while San Antonio focuses on the consumer hardware. In short, we’re well past the point when Central Texas needs two dealer-specific shows.

And when building the better shows, organizers should remember a narrative. We now have Cars ‘n Coffees throughout the country. And each and every Saturday at those Cars ‘n Coffee venues the concept of automobiles as a passion is reinforced. I’d argue the car clubs that typically are offered some space at many shows shouldn’t be shuffled off into a corner, but instead should be a centerpiece – or at least a few of those cars should serve as centerpieces – of the show experience. You can see a new car anywhere, but a ’32 Highboy? Not so much…

And don’t forget regionality. Car shows aren’t big box stores, with San Antonio’s Gap identical to one parked in San Francisco. San Antonio should have a regional aspect not shared with North Texas; again, given South Texas’ culture and enthusiasms, coming up with some local hook shouldn’t be much of a reach.

Nothing in the last century has been as transformative as the automobile. A smartphone can take you many places, but it can’t get you there. And it – we can say with certainty – never will. While we still have personal machinery, let’s celebrate it. And there’s no better place to celebrate than an auto show. We’re sending out an S.O.S.

Bicycle Times’ Adventure Fest | Roll Your Own
The Year in Review: 2017 Hits and Misses
Event Calendar