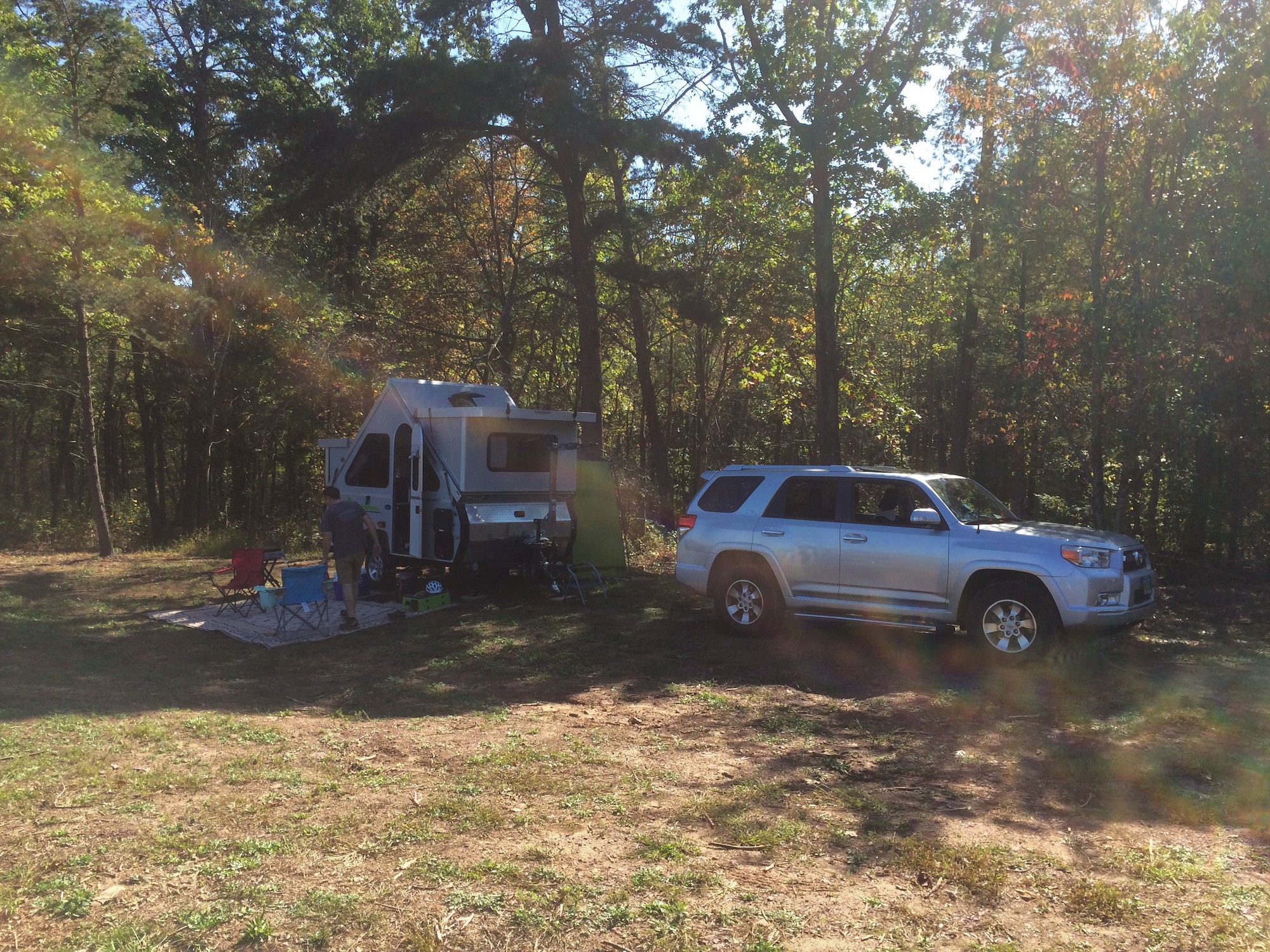 These are adventurous times…if only in our minds. Roughly two-thirds of the U.S. population is behind the wheel of a crossover or SUV, looking as if they’re prepared to traverse a Third World country. The only disconnect? We won’t go anywhere without a reliable cell phone connection. And there are many of us, looking for adventure but – with a very real basis in reality, which is to say, time and money – searching for something closer to home.

Organizers of the offroad-oriented Overland Expo make a strong appeal to those with an interest in motorized overlanding, while the team at Rotating Mass Media – publishers of both Dirt Rag magazine and the newer Bicycle Times website – is attempting to energize its two-wheeled constituency with its Adventure Fest. Held this year at the Stokesville Lodge, roughly 45 minutes west of Charlottesville, Virginia, the weekend event is a mashup of mountain biking, road riding and camping. Throw in vendors offering everything from bikes and tires to zip ties, and you have the makings of a weekend to enhance both your life and style.

Traveling from the west side of the D.C. ‘burbs, we were just over two hours away from the Stokesville Lodge area via Interstates 66 and 81. And as you’d guess, heading toward the Shenandoah Valley in mid-October is pretty damn nice, especially when the drive is punctuated by a brilliant sky and the early suggestion of fall colors. While we were on a tight timeline, stops at the Civil War Museum in New Market and an afternoon at the Luray Caverns would enhance the trip, while necessarily turning a day’s drive into a weekend commitment.

If arriving at the site midday, you do what any red-blooded American would do – grab a barbecue sandwich (using both hands – it’s big) and a whopping dollop of (perhaps) the best potato salad this side of Central Market. Wash the whole thing down with a Pepsi and then, of course, pretend to look athletic. Fat chance. But for the casual tirekicking in and around the vendor venue, I decided a swollen gut might go with fat tires.

The most visible collection of bikes had been assembled by the Wisconsin-based team from Trek; their grouping included roughly a dozen e-bikes. And that number was quickly reduced by the number of attendees taking the bikes for demo rides. We didn’t, but in retrospect wish we had. The buzz for electric bicycles – sorry, we had to – is huge, and while I’m not a handraiser I can see the appeal to bike commuters, especially in hot, humid climates. Just don’t let them – please – navigate dedicated hike-and-bike trails. If the EV bike riders want to use the bike lanes, they have my very best wishes – but an electric bike going twenty miles per hour amongst walkers and their babies on a narrow bike/hike path is plainly stupid.

Beyond Trek and its electrics, we enjoyed assessing Salsa, Fuji, Breezer and Bianchi. Time spent in the Bianchi booth included a lap with their Impulso gravel bike, which – in the short time we were on it – proved both agile and comfortable. The ‘endurance’ geometry of these bikes is growing on me, as the more upright position puts less stress on the back while – not incidentally – enhancing your own visibility. And although it looks slower, it isn’t necessarily slower; I’m slower!

Fuji bikes have been on my radar since writer Maynard Hershon wrote a catalog for them, and Fuji’s commitment to the gravel/adventure genre seems as strong as any. Breezer, a corporate partner of Fuji under the Advanced Sports umbrella, brought its Doppler, Inversion and Radar gravel bikes, and while I didn’t take the opp to ride I was impressed by carefully designed steel frames and – for the price point – their upmarket spec.

Beyond bikes was the apparel (great deals on Bicycle Times and Dirt Rag-branded merchandise) and swag; we were especially intrigued/amused by what Green Guru does with bicycle tubes. But we were most impressed by the general vibe in and around Stokesville Lodge. The Shenandoah may not be the epicenter of mountain biking, but in the mid-Atlantic you’d be hard-pressed to find anything better. Next year we either bring our own bike, or – at the very least – our own shorts and shoes.

Paint it Red – The Story of Joe Bailon
From San Antonio, Sending Out An S.O.S. – Save Our Show!
Event Calendar