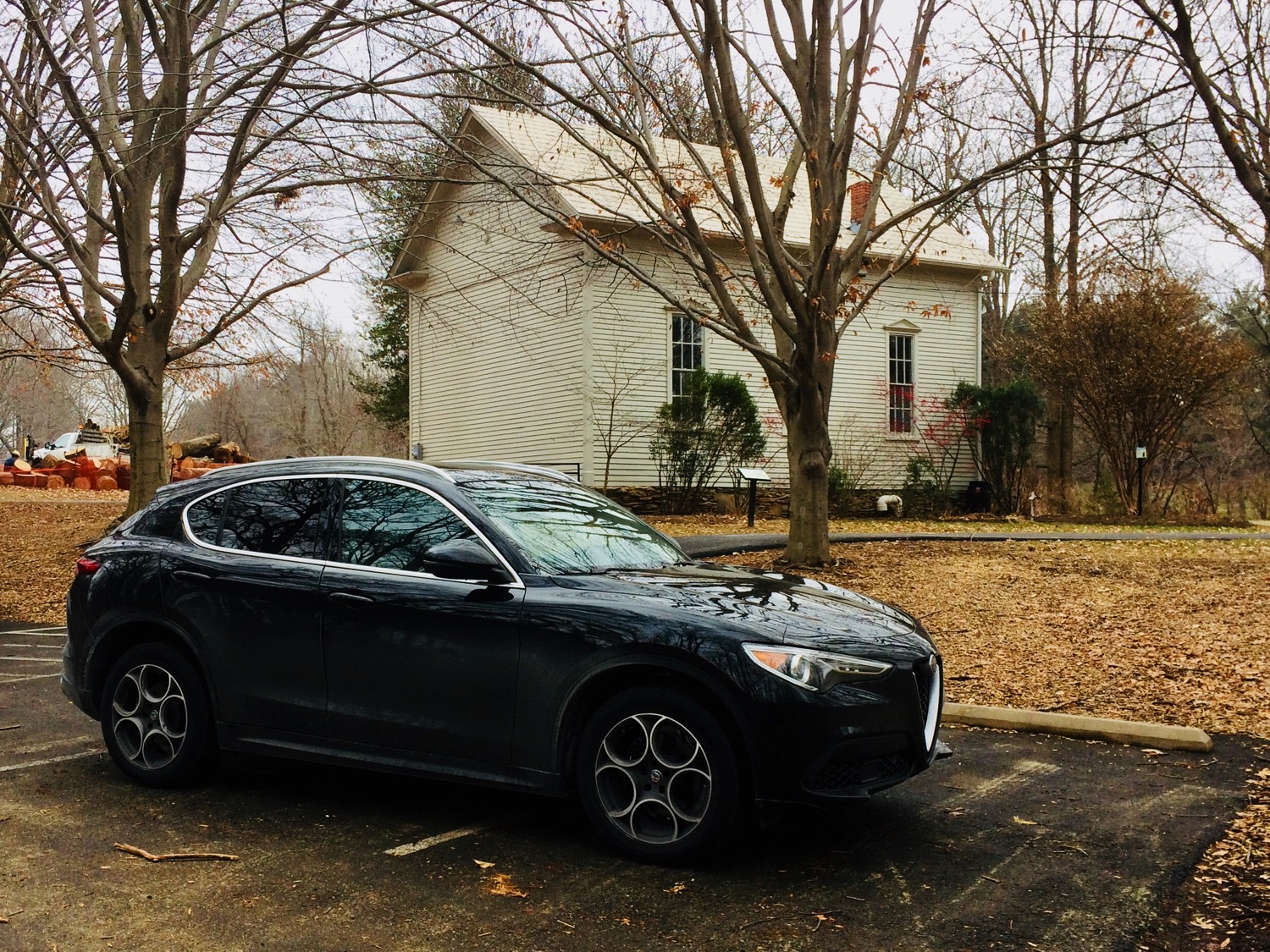 From almost its inception, and certainly since production of Alfa Romeos resumed shortly after World War II, there has always been a slightly effeminate aspect to Alfa Romeo design and specification. Regardless of decade, the sheetmetal has invariably been soft (leaning toward the organic), rarely possessing design elements you might refer to as hardened or chiseled. And under Alfa Romeo hoods, rather than Belchfire V8s, Alfa has typically relied on either high-revving fours or small-displacement sixes. In short, The Milano-based carmaker hasn’t been selling Charles Atlas, it’s been pitching Charlize Theron.

With Alfa’s recently orchestrated U.S. revival its organic sheetmetal remains organic. However, with the introduction of the Stelvio crossover Ms. Theron gains some weight and adds some muscle tone; not to worry, as she’s done this before. The end result is something Alfa Romeo has never done (if we exclude the occasional contract with the Italian military – and we’ll take your joke offline). But before the F-Pace, Jaguar had never built an SUV. And before Trump we had never elected a reality TV star. This is that year.

As an Alfa owner for two brief periods – during both the Ford and Reagan administrations – I approach any new Alfa with equal amounts of enthusiasm and skepticism. So it is with the Stelvio, as I wanted to like its expanded capability while wishing its footprint wasn’t, well, so ‘expanded’. If you take a look independent of anything else on an Alfa showroom (the Giulia sedan and 4C coupe/roadster), the Stelvio looks completely appropriate to its midsize competition, which we see as the Audi Q5, BMW X3, Mercedes GLC and the aforementioned F-Pace. 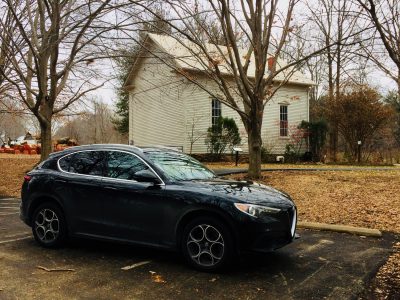 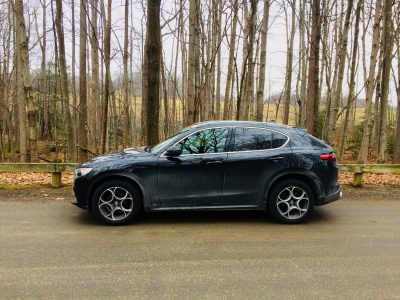 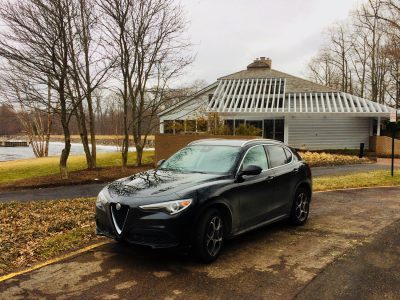 In its sheetmetal, happily, is that organic feel we’ve come to expect from Alfa’s design team over the last sixty years, but on – you guessed it – steroids. It is, from almost any angle, a collection of handsome details forged into one very cohesive whole. And from its distinctive nose to rear hatch, we’d modify only the hatch, enlarging the backlight for both better visual balance, along with providing better outward visibility from inside the Stelvio. And given the Stelvio’s SUV-ness, we’re pleased to admit it still looks pretty good when dirty, not something we would have said after our time with the Giulia Quadrifoglio.

Once inside, our Ti Lusso provides a sensitive – albeit not sensual – take on entry-level luxury. Its leather covered buckets are supportive, the leather-wrapped steering wheel perfectly proportioned, and heating controls totally intuitive. We can’t/won’t say the same about the infotainment system, as it requires far more than the few days we had with the Alfa to achieve a genuine comfort level. And why the product team needs to rethink an automatic transmission lever is absolutely beyond me – and will remain beyond me. It isn’t as problematic as what is currently offered by BMW and Benz, but then neither is it the no-brainer available in FCA’s Grand Cherokee.

Under the hood, Stelvio prospects will enjoy a turbocharged inline 2.0 liter four, delivering 280 horsepower and 306 lb-ft of torque. With all four wheels driven through an 8-speed automatic, and doing it via three available drive modes, the Stelvio feels smaller than its physical footprint suggests, more Charlize’s Italian Job than Monster. This is a genuinely fun platform to toss around, while knowing it’s a crossover and not, notably, an autocrosser. Upcoming is the Stelvio Quadrifoglio with a Ferrari-derived V6, which will serve as one of the better reasons for you (or your spouse) to become a one percenter.

If not yet in that rarefied financial atmosphere, know that the ‘cooking’ Stelvio starts at just over $40K and will top out in the mid-$50s. If it was us, we’d spec the base Stelvio with a silver exterior and black/brown leather, keep the wheels 18-inch and not opt for a sunroof (which we’d rarely use). With that, we’d be comfortably under $45K to purchase and around $470/month to lease – over 36 months. At the end of three years we’d know if we liked living with it, ‘cuz we know we like looking at it. And driving it.