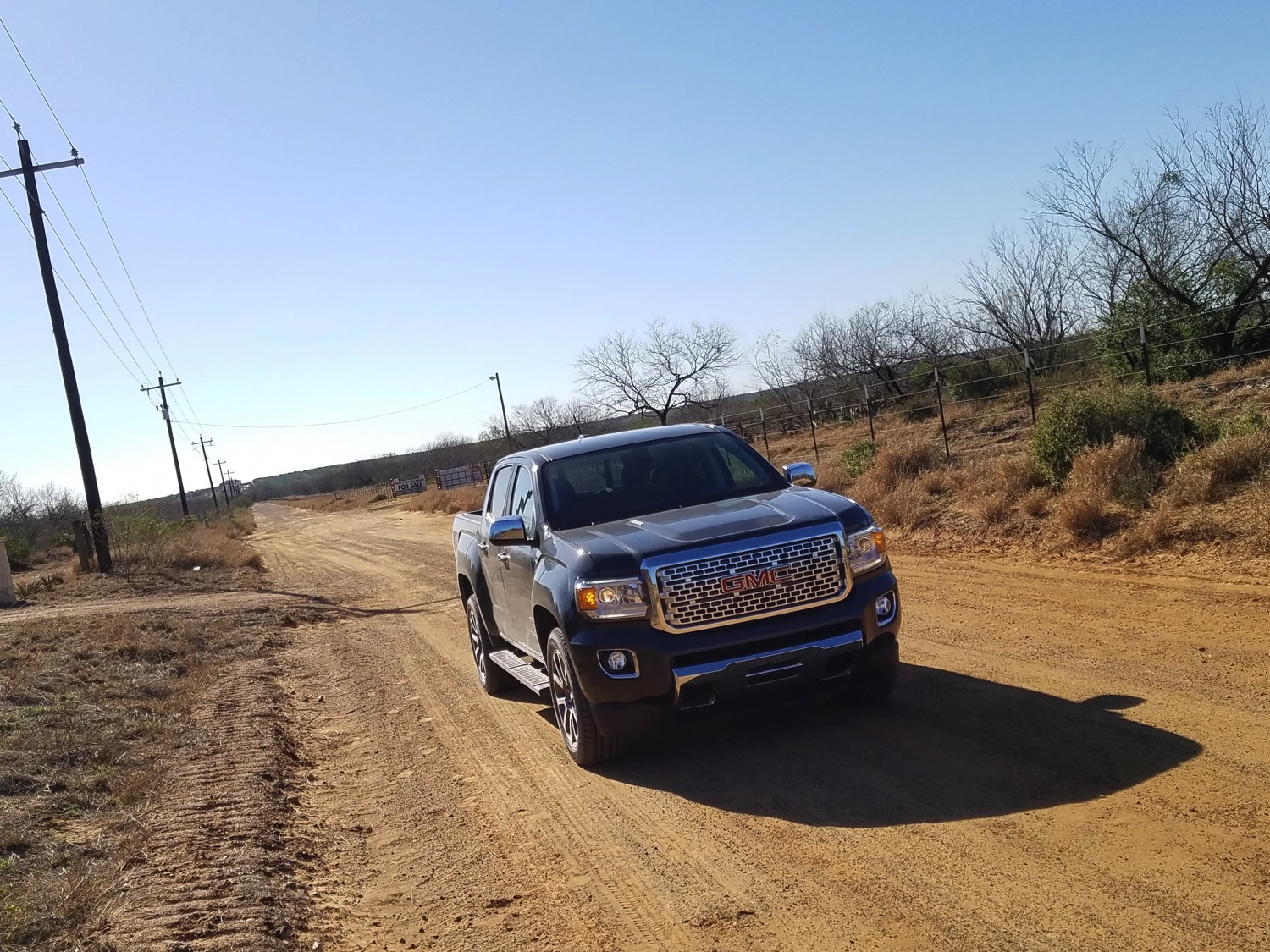 All GMC truck owners have uttered this phrase at one time or another: “No. It’s not a Chevy, it’s a GMC.” Followed by, “I know it looks like a Chevy, but it’s better. It’s a GMC.” The first truck I reviewed was the 2016 Chevrolet Colorado Duramax, which I loved. Now I had the new 2018 GMC Canyon Denali, with a Duramax diesel. It was time to find out why the Canyon is better (of if it is better) than its separated-at-birth Colorado twin.

INTERIOR: This test model was the Denali; it’s the luxury trim level, and the closest you’ll get to a Cadillac interior in the GM family tree (until Cadillac opts to build a pickup – ed.). So I was surprised when I got inside and felt… disappointed. There’s no blind spot detection warning, and it offers a gear shift lever that looks like it was recycled from a 2002 Chevy Malibu.

Yes, you do get a 7-speaker Bose audio system, an 8-inch touchscreen infotainment system and a wireless charging pad. However, these are all features you can find in a Chevrolet – and many other competitors – for less money. The charging pad was too small to fit my (now old) Samsung Galaxy S7 Edge. The seats are leather, but again this is 2018 and it’s a little hard to be impressed by a modern all-black leather interior.

GMC only offers the Canyon Denali with black leather interior, and the drips of wood accents get lost in the emptiness of a dark leather space. It’s supposed to feel like a luxury interior package on an already upscale manufacture brand. I should also point out that the Denali trim level is a $4K option. I have no idea where that money is going, other than a Denali nameplate, shinier chrome grille, and a bed liner that says DENALI.

EXTERIOR: The 2018 GMC Canyon Denali redeems itself on the outside with its styling. The color on this test truck is called Dark Slate Metallic. Side-by-side, this midsize truck makes my 20-year old GMC Sierra look like a Datsun mini-truck, yet it still looks well proportioned. It’s the ideal size for someone that might not need a truck, but still wants one – a condition all-too-common in Texas.

Other pickup trucks have faces that look like they are wearing helmet face guards. Their front grilles spread out and cover the headlamps to look more aggressive. (The new Silverado is a perfect example of this.) Trucks don’t always need to look like they eat their steak rare with a side of blood for gravy. It’s okay to design a beautiful pickup truck that can perform like a bare knuckle brawler.

GMC, thankfully, has refrained from following the herd in this Rambo styling trend. The Sierra and Canyon share similar features. Big square headlamps with round lights, a proud standing grille, and a front bumper that bends to give it a smile. The GMC Canyon is a pretty-boy sporting a crooked smile trying to appear modest, while discreetly feeding its ego with attention.

SPECS AND PERFORMANCE: You can option the GMC Canyon with three different engines. Standard is the 2.5 liter four cylinder, which is unworthy of this truck’s capability. Buyers can upgrade to a 3.6 liter V6, with a surprisingly quick 308 horsepower, but for an added $3,370 you can get the Duramax diesel. It’s a 2.8 liter turbo diesel four producing 180 horsepower and 369 lb-ft of torque. In our test truck, power and torque are sent through a 6-speed automatic transmission. 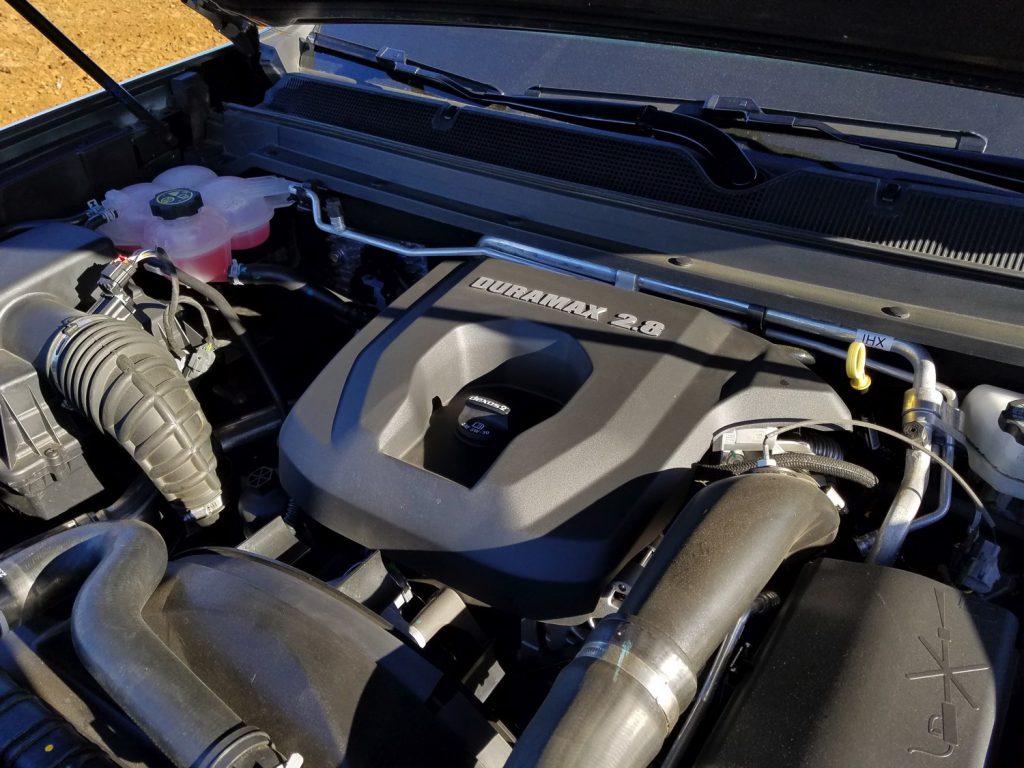 On paper it might not sound like a lot of power, but the GMC Canyon can reach 0-60 in 7 seconds. Put your foot down and the Duramax responds well, allowing you to pass anything crowding the slow lane. The GMC Canyon has a payload of just over 1,500 pounds and can tow up to 7,600 pounds.

Fuel economy with the Duramax is – as you’d hope – pretty good. A full tank will give the Canyon 600 miles of range with 20 mpg in the city and 28 mpg on highway. After a week behind the wheel I averaged 25 mpg!

FINAL THOUGHTS: My one and only complaint with this luxury-trimmed diesel midsize is the price. Having driven both the Colorado and Canyon, with the same Duramax engine, I don’t see why the Canyon costs so much more. Because it’s a Denali? Okay, but where is the luxury? A charging pad that’s too short and narrow for a typical smartphone?

Like a pair of identical aviator sunglasses; one is from a run of the mill kiosk at the mall for $45, and the second costs $300 because it has a designer sticker on the corner of the lens. You’re paying for the brand but not getting a massive improvement for the added cost. And that’s my problem with this truck. Anyone who buys this will one day talk to a Colorado Duramax owner and possibly feel cheated when they see that the Colorado also has leather seats, a bed liner, and 8-inch touchscreen.