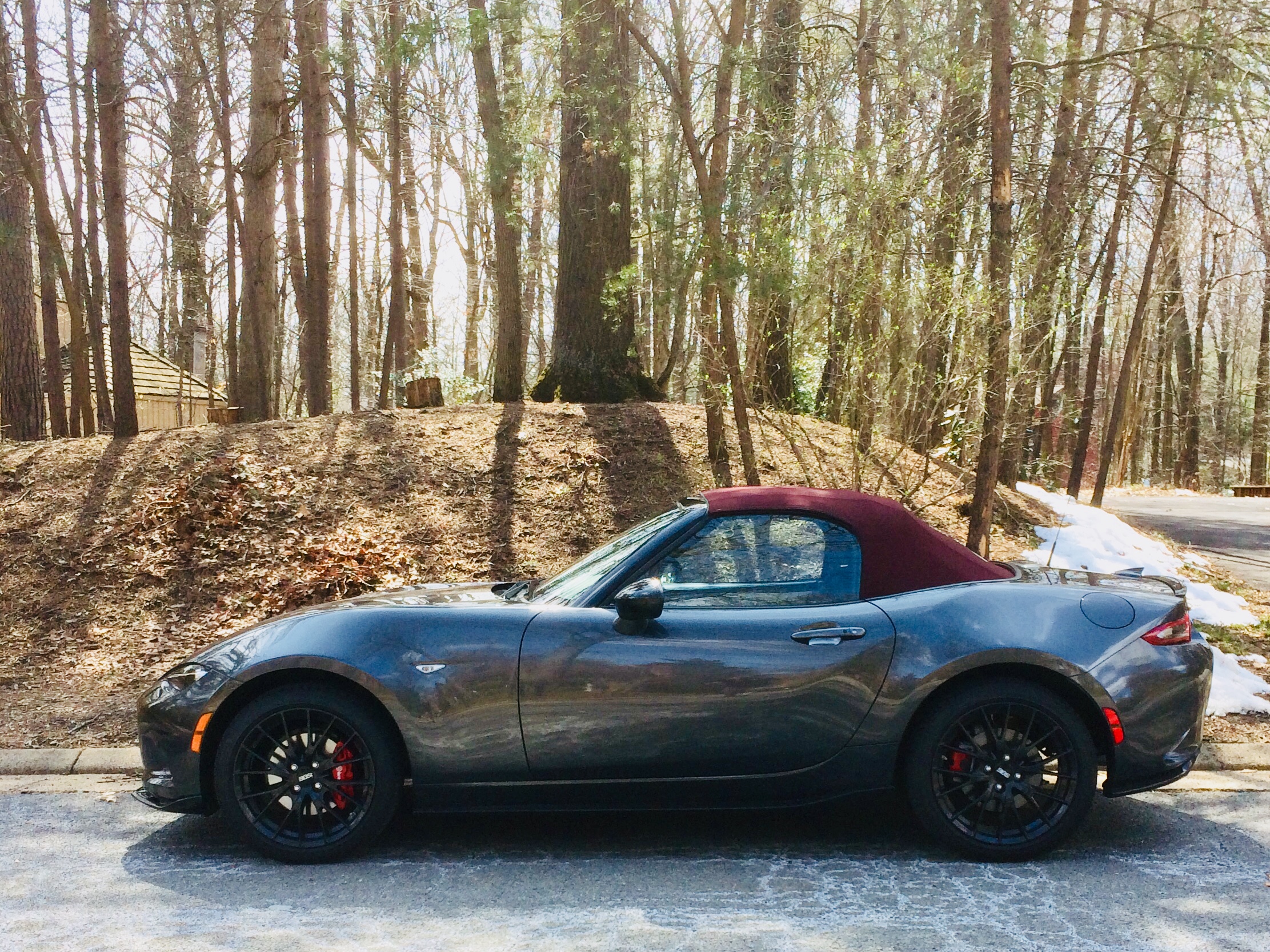 Driving into the Cars ‘n Coffee in Great Falls, VA, I’m immediately greeted by a vintage MG. The commercial sign company in Fort Lauderdale designed signage tells me it’s a TB, which had followed MG’s TA. Here in the States, we know the postwar TC better, which – in tandem with Volkswagen’s Beetle – is largely responsible for our collective affection toward the import car. I mention the TB because you can’t buy a new one, and you can’t experience firsthand its immediacy or simplicity. But you can – thankfully – buy Mazda’s MX-5 Miata. 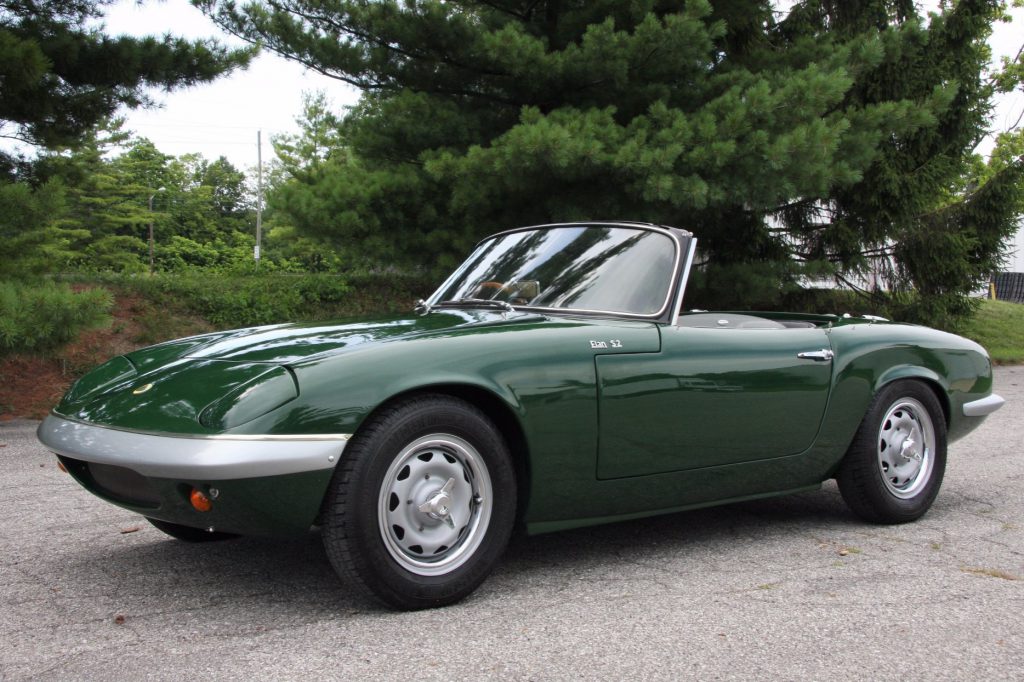 For the last quarter-century, no automaker has remained as firmly committed to one model and – most notably – one basic footprint as has Mazda in its design, construction and marketing of its MX-5. Designed in the late-‘80s as a Japanese answer to a waning British category, the Miata was exactly what American enthusiasts had been wanting since, well, World War II. With a chassis capable of defying physics, a willing powerplant and a real sense of an intentional balance between the performance you might want and the performance you really need, the initial Miata was an over-the-window-sticker hit from the moment it was announced. And in the ensuing 28 years Mazda hasn’t deviated from that formula.

In fact, with the introduction of the 4th generation Mazda has returned – to a surprising degree – to the Miata’s roots. While the 3rd-generation ‘NC’ certainly wasn’t fat, the ND architecture benefits from a nip here and tuck there dimensionally, while dropping some 200 pounds in curb weight. So while horsepower coming from its 2.0 liter four isn’t up, the Miata’s power-to-weight ratio is. (And with but 155 horsepower from those two liters, every little bit helps.) But to put it in perspective, the MG had absolutely no horsepower (LG makes washing machines with more torque…), and while VW’s Bug had a modicum of power for its time, today’s Toyota Prius would leave it in the dust.

On any number of levels, however, the Miata transcends power. With steering that’s immediate, a gearbox well connected to the gears and the needs of the engine, and braking – our Club was equipped with optional Brembos – that recalls a carrier landing, the Miata is not only a close extension of your feet, hands and eyes; it’s essentially an extension of your will. And it’s good will.

While the dynamic is a continuum of what Mazda enthusiasts – both men and women, btw – have enjoyed over the last twenty-five years, the sheetmetal is a departure. As originally drawn in the first NA, and subsequently redrawn and/or refined in the 2nd and 3rd generations, the Miata was inspired by the spritely Lotus Elan, a tiny 2-door built throughout most of the 1960’s. If parked side-by-side the Miata is much bigger than the Elan, but then, the Lotus was built for postwar Brits still recovering from postwar rationing. The Miata was built for Americans, and while the car may not have been fast the American diet was – it had to be bigger.

For the 4th generation, Mazda took a clean sheet approach, one that is less derivative and – with an Origami-like fold in conjunction with the occasional organic curve – far more original. We like the overall design, from nose to tail, but the wheelwells overreach the wheel/tire combo, while earlier models came with what seemed like a more aggressive stance. And given its smaller dimensions, getting in and out seems more of a chore, but then, our age (rather than the newness of the Miata) may have more to do with accessibility.

And mention of accessibility brings us to affordability. While the Sport trim starts at but $26K, our Club edition (with – notably – standard limited slip) is closer to $30,000. And when you add the Brembo brakes, 17-inch forged alloy wheels from BBS and leather-trimmed Recaros, you’ve also added $4,500 to the bottom line. The end result, with destination and a little of this-and-that, is $35K for what has historically been an affordable roadster.

Were we on the Mazda product team, we’d offer a Sport-level trim with absolutely none of the nanny adds we found on our Club version, and absolutely nothing on the steering wheel except three spokes and the mandatory airbag. We’d also toss the dash-mounted infotainment screen in exchange for a traditional stereo head unit, but add limited slip differential, a sport-tuned (i.e., more aggressively tuned) suspension and lowered – by maybe an inch – ride height. Keep the price comfortably under $30K and watch Miata sales double.

A couple of years ago we had a 3rd-generation Miata for an extended loan of three fun-filled months. If anyone from Mazda is reading this and needs some break-in miles added to a press car, please regard me as a handraiser. Even with little hair, the newest Miata is hair-raising fun.