Amongst the big three (Ford, Chevy, and Fiat Chrysler), each one has taken turns in setting the bar higher in the evolution of the pickup truck. From being seen as mules with cargo beds at the turn of the last century, pickup trucks have grown into Swiss Army-knife vehicles (although the Swiss don’t buy them – ed.). Modern trucks have to be able to perform as workhorse, grocery getter, status symbol and school bus throughout the week – every week. What Ram has done with the latest 1500 is build an all-in-one vehicle that checks as many boxes as possible for truck buyers.

A class-leading interior with active noise cancellation keeps the roar of the outside to a minimum on the inside, while adding 4 inches of legroom for rear seat passengers. There’s also a new twelve-inch infotainment screen with split-screen capability. And all this: Leather interiors surrounded by a 900-watt Harman Kardon audio system with nineteen(!) speakers, and an optional dual-pane panoramic sunroof.

But it’s not all play, as the new Ram 1500 provides a max payload slightly over 2,000 pounds and a towing capacity of over 12,000 pounds. Multiple trim levels allow Ram buyers to option out their 1500 to near-custom specifications. 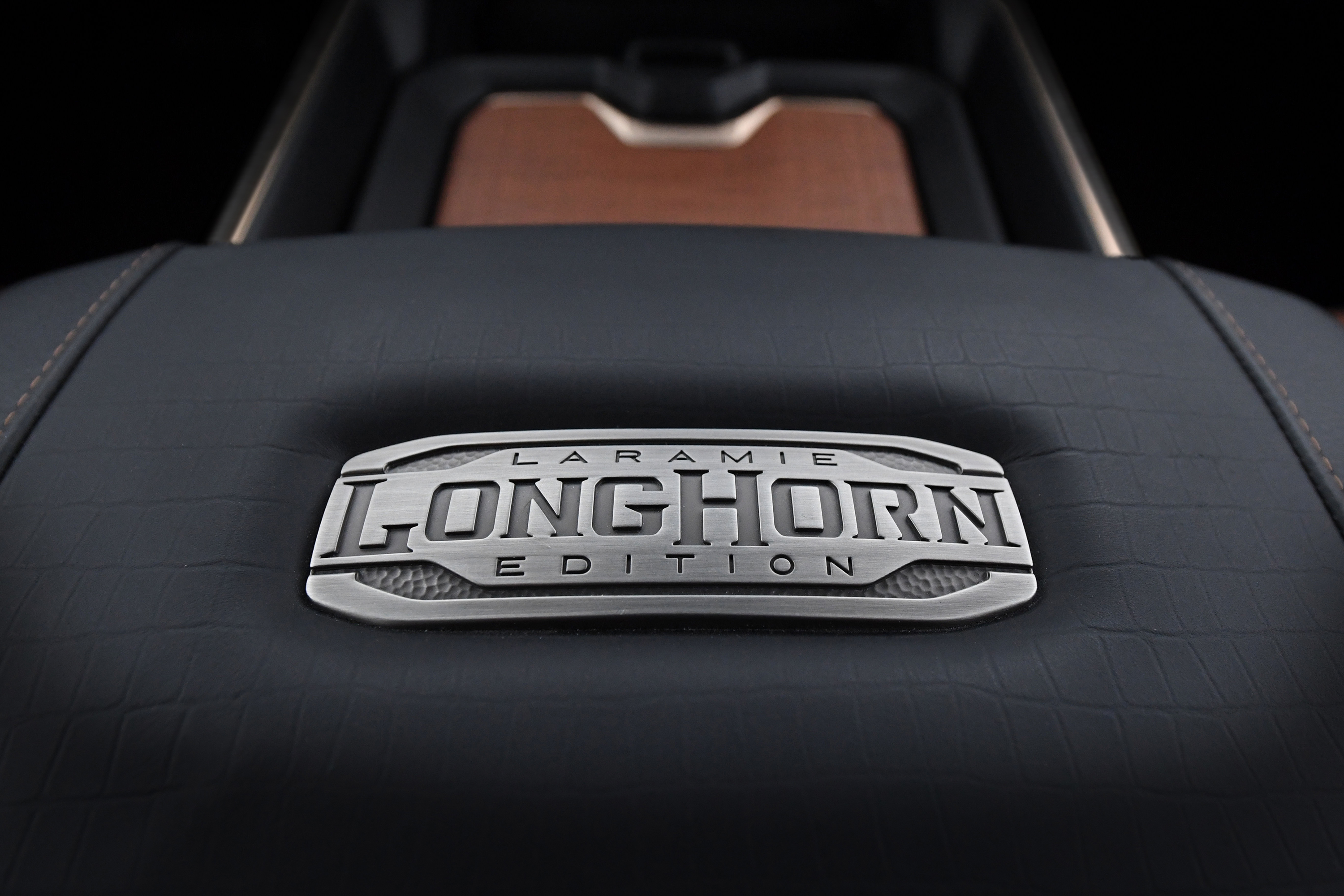 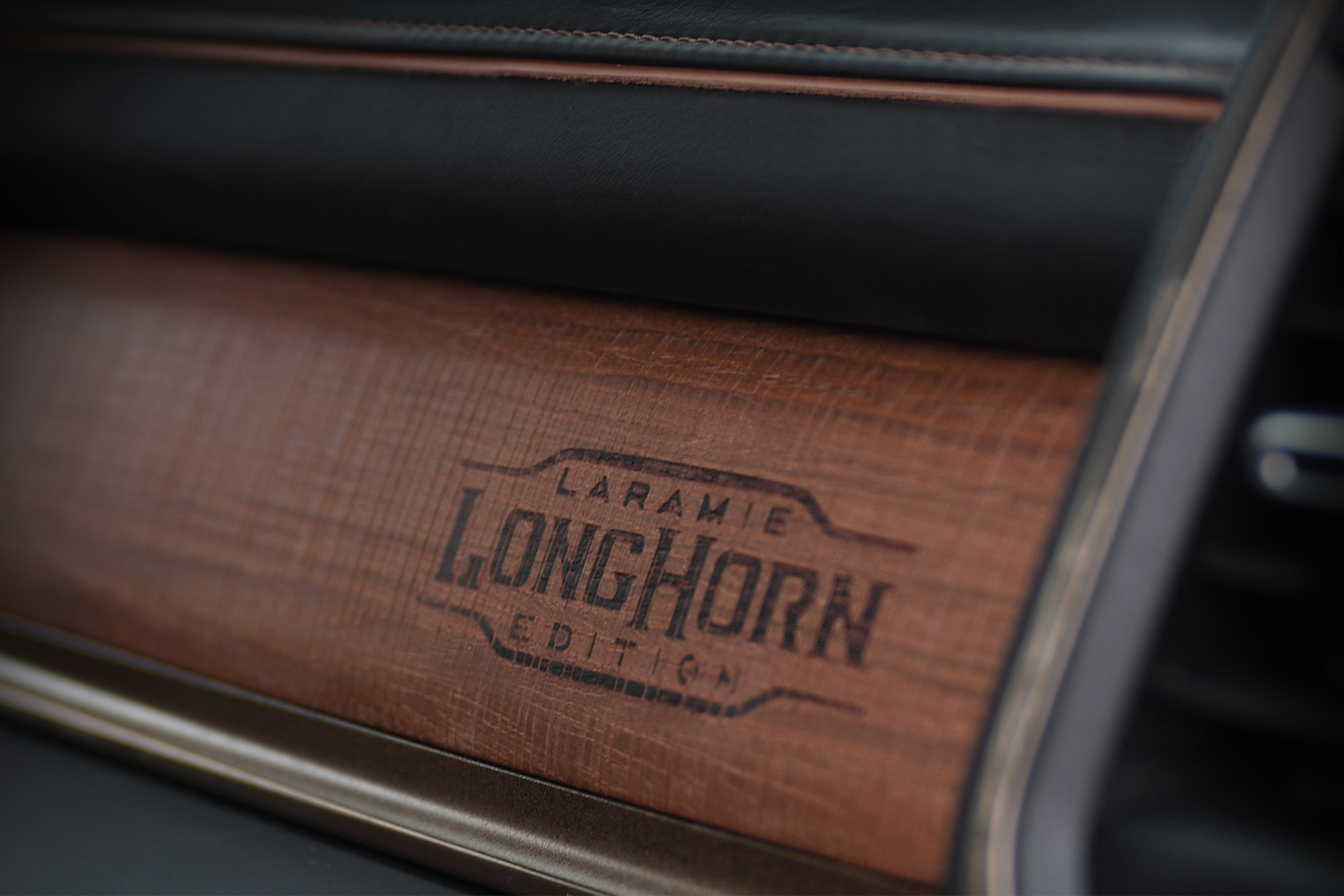 INTERIOR: I decided to ride in the backseat during part of the test drive to experience the new improvements to the Ram 1500. The model used for this drive was optioned with Ram’s new Mountain brown leather interior, which included gold accents. I felt like I was inside a wealthy rancher’s vacation home with branded engravings on the seats, saddle bags and real wood accents. I personally loved the touches of gold sprinkled throughout the cab.

On crew cab models the rear seats can be reclined up to three inches, which makes a world of difference for perceived room. The back of the 2019 Ram 1500 Longhorn had so much space I considered renting it out to high school seniors for Homecoming. The dual-pane panoramic sunroof is as close as we’ll get to a factory convertible pickup truck. Ram states that their leather interiors offer 58% more leather than Ford and Chevrolet, which can be a positive or negative, depending on the individual’s feelings for PETA.

THE DRIVE: Once behind the wheel, the first thing I did was stomp on the throttle as if I was killing a bug to see how light this nearly 6,000-pound truck was on its feet. The 5.7 Hemi offers 385hp and 410lb-ft of torque, while producing an inside voice-level baritone that cradles the eardrums while accelerating the pulse rate. However, I never felt that the 2019 Ram 1500 Longhorn was going to get out of hand. The trucks’ weight prevents it from being a charging ram, like its V8 Charger and Challenger siblings. There’s more than enough power to overtake in the fast lane, while feeling like you are in control of a large beast.

As with all modern trucks the 2019 Ram 1500 Longhorn is big, and feels like a Goliath the first time you make a turn. While driving on the two-lane highways deep in the Texas Hill Country, I quickly got used to the Ram’s dimensions. I’ve always enjoyed FCA’s throttle and brake response. Even though they are electronic they’ve mastered the sensation that allows the driver to feel like they are still being controlled by a cable. It allows you to be surgical in how much force you want to apply to stop or go, without feeling that half-second delay of a computer calculating if it’s safe to do so.

This is a mild hybrid technology, and Ram describes it as this: “eTorque works in harmony with existing technologies such as cylinder deactivation, variable-valve timing and fuel shut-off to improve performance of those systems and expand their use.”

This system eliminates the Ram 1500’s need for an alternator. It works as a 48-volt, but can switch to a traditional 12-volt for duties that don’t include working with the engine directly, like keeping the power during fuel-cut off at a spotlight. The simplest metaphor to describe how eTorque works is to think of it as a weight spotter for Ram’s engine. When the V8 or V6 needs to bench press itself forward or stop, eTorque provides additional torque through its electrical motor, reducing the amount of energy required by the engine and saving fuel. Technically this makes the 2019 Ram 1500 a hybrid vehicle – sort of.

Ram states that eTorque adds another 130lb-ft of torque to the Hemi V8 and 90lb-ft of torque for the Penstar V6. This system also increases the V8’s efficiency allowing it to produce 22 mpg on highway, 17 in city for an average of 19 mpg. The 2019 Ram has a class-leading towing capacity of 12,750 pounds and a max payload of 2,100 lb.

DESIGN: I wanted to make a quick note on the Ram’s new front end. The chrome brow that sits above the headlights makes me think of the D-Series Dodge trucks from the early 1960’s, which sported a similar design cue. Given that FCA loves to evoke nostalgia, I wouldn’t be surprised if this was intentional. It looks a lot better than other 2019 truck grilles…which I won’t mention by nameplate. But I could.

Chrysler’s Pacific Hybrid:
To Have. And Have Not.
Hyundai’s Ioniq – Life in the mid-50s
Event Calendar