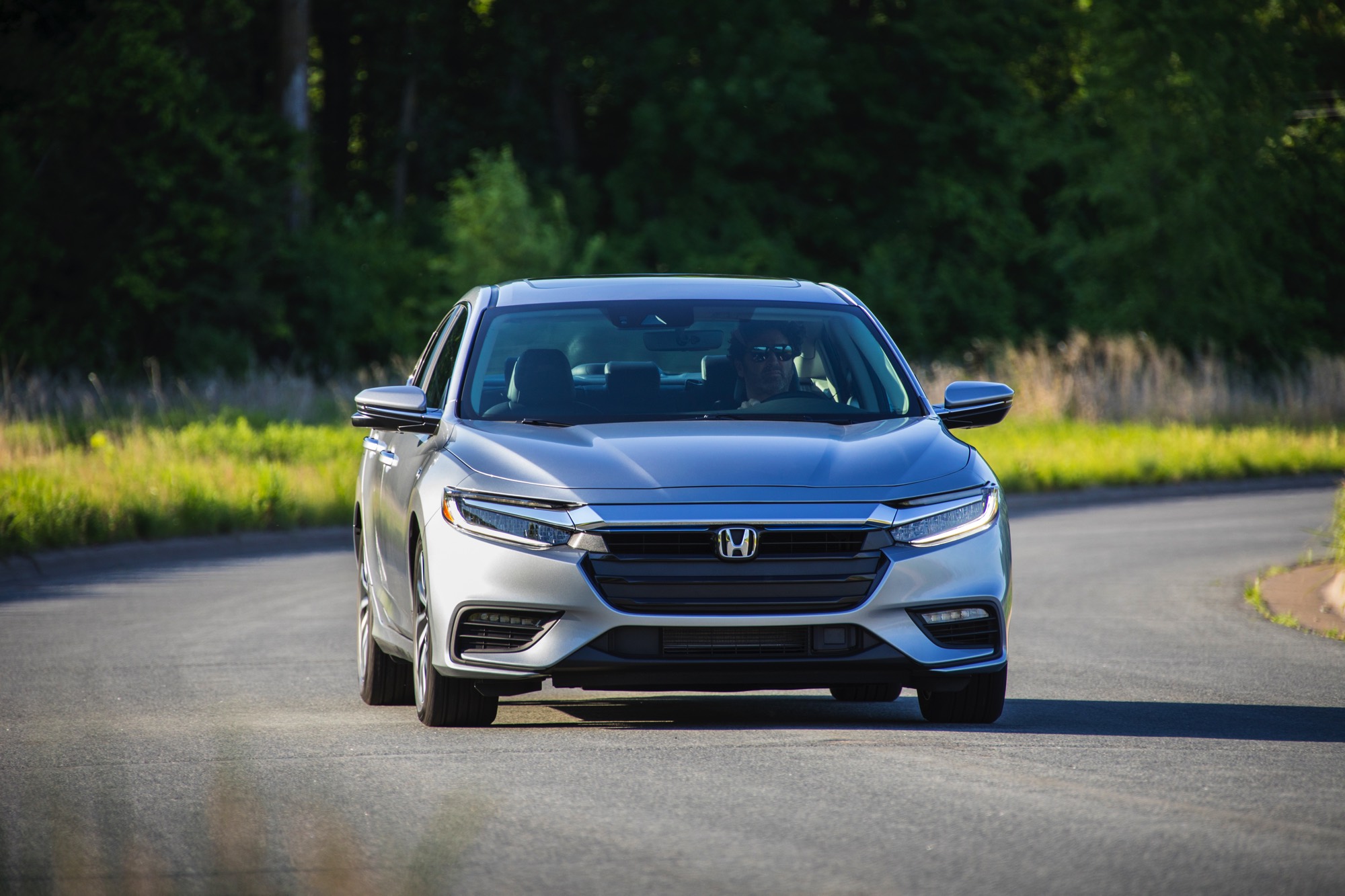 If you’re in the camp that believes chestnuts ‘roasting on an open fire’ put out way too many carbon emissions, have we got the car for you. Honda’s Insight started life in 2000 as an eco-sensitive riff on Honda’s earlier CR-X. It has now reemerged, in its third generation, as a more civic-minded Civic 4-door, sharing its platform with the 10th-generation Honda compact but (thankfully) little of the Civic’s excessively expressive sheetmetal.

Having just extracted myself from Toyota’s latest Prius (in Four Touring form), I had a fairly good idea of the competitive set. That $33,000 Prius was surprisingly engaging to drive, although – with its Jetsonian design – looked as if it would have been engaging to fly. And despite its loaded content, I still couldn’t get my head around a $33K Prius when the starting point for the model is a full $10K less.

Perceived value won’t be the issue with Honda’s 2019 Insight. Starting at under $23,000 for the Insight LX, the Honda hybrid – even in hard-loaded Touring form – tops out at under $30K. And given its interior detailing and relatively conservative sheetmetal, this newest Honda looks to sit in the mid-$30s. With the exception of its overtly busy wheel design, there wasn’t much we’d change with the Insight’s exterior, sitting – as it does – on a manageable footprint and having all the inside room four adults should reasonably need.

Behind the wheel, the driver is greeted with an entirely accessible assemblage of this century and the last one. What Honda describes as an ‘intuitive…customizable interface’ is a mashup (an artful mashup) of touchscreen and configurable instrumentation, with feeds supplying energy management, fuel economy and range, an eco score and navigation. I kept mine in ‘fuel economy and range’, if only to keep my mind off of a plunging stock market and Theresa May. And distressingly, that average mile per gallon indicator continued to fall during its week in our driveway, starting at 42 when delivered, and dropping below 40 after a few days of largely stop-and-go driving. Our Touring trim delivers ‘but’ 51 City/45 Highway/48 Combined EPA, so a realistic stop-and-go in the low 40s seems reasonable, but the aforementioned Prius was giving me 46 in a roughly similar driving routine.

The Prius, however, wasn’t supplying the veritable lap of luxury that Honda supplies in the Touring interior. Our Insight’s ivory leather was perforated, completely supportive and, in a DC December, thankfully heated. The Touring trim also provides dual-zone automatic climate control, 8-way power adjustment for the driver and 450 watts of premium audio. As to whether that’s worth the $4K premium over the EX trim level is up to you and your lender. But again, this amount of content for comfortably under $30K had me wondering about the business case, while knowing damn well Honda’s suits are smarter than this suit; I, uh, don’t have a suit.

The big stories with any hybrid are, of course, both under the hood and on the road. That’s unless, of course, you’re producing the Insight brochure for Honda, where the drivetrain doesn’t get a mention. (We have the space, so I’ll repeat that: The Insight’s drivetrain doesn’t get a mention.) But if you should wonder how Honda achieves 50 miles per gallon (or thereabouts) in a comfortable 4-door sedan, it begins with a 1.5 liter DOHC inline four, paired to an electric motor. The end result is 151 horsepower and 197 lb-ft of torque, all of which is communicated to the front wheels via Honda’s eCVT – Electric Continuous Variable Transmission. The driver (or front seat passenger – if they’re inclined…) can select from three driving modes: Normal, Eco and Sport. And while we would have preferred ‘Sport’, we were hard pressed to discern any improvement in feel, and a very real degradation in the drivetrain’s audio – ‘Sport’, in short, felt strained.

While the Insight’s comfort touches – especially in Touring trim – are desirable, and its price point looks to have been set by the guys at Dollar Tree, we were hoping for more engagement from the platform. Honda has typically provided high quality 4-doors with a semblance of an entertaining driving experience (our last Accord, also in Touring guise, was very engaging), and the Insight just didn’t spin our meter. But if your meter spins more freely – or you’ve simply outgrown a ‘meter’ – know that the Insight delivers efficiency, within a wrapper of accessible luxury. And in what looks to be a tumultuous 2019, there’s absolutely nothing wrong with that.