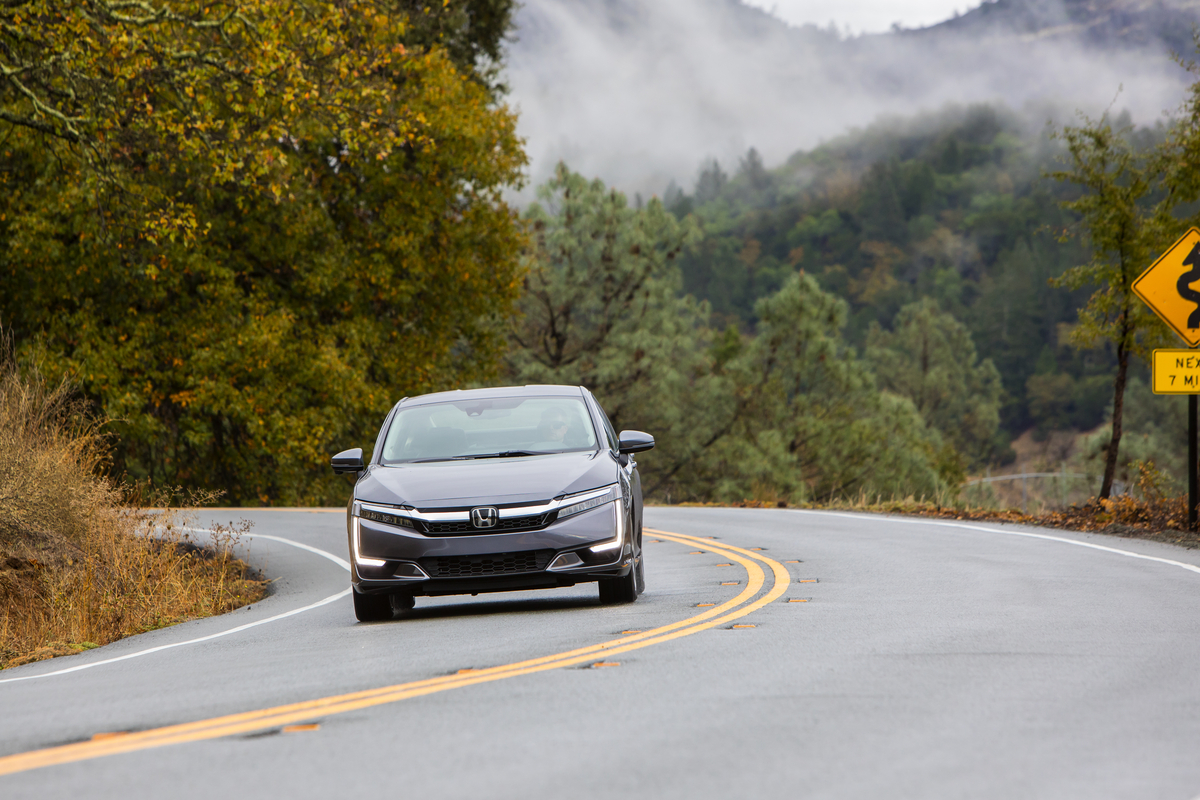 With Carbon For None, And Clarity For All

Here, we think, is the premise. You’re a tree hugger, fully committed to minimizing your environmental impact. An EV would be perfect, but despite the extended range of a Chevy Bolt or Tesla’s Model 3, you get the occasional urge to hug a tree further out than the 200+ miles that Chevy and Tesla currently (pun – I think – intended) allow. One solution is the plug-in hybrid, providing 40+ miles of all-electric commuting day-to-day, while making the occasional forest foray via an internal combustion range extender on weekends. As Chevy continues to build the Volt you could opt for that, while knowing Chevy has announced its discontinuation. Or you could find environmental clarity with – if you will – Honda’s Clarity plug-in hybrid, allowing you to hug a tree well beyond the range of Elon’s Model 3.

On first seeing Honda’s Clarity we were thinking fuel cell, as that seems to be the most hyped variant of Honda’s new suite of EVs. But there are three, with the fuel cell technology supplemented by a Clarity EV and the subject of this test, the Clarity plug-in hybrid. All three share the same basic sheetmetal and footprint.

The Clarity’s sheetmetal looks as if George Jetson took an Accord and asked the King of the Kustomizers, the late George Barris, to make it more ‘Jetsonian’. Forward of the Clarity’s B-pillar is a heavy dose of Accord, while behind the B-pillar is, within its semi-covered rear wheel openings and fastback profile, a heavy dose of French. Subjectively, this is all a tad too busy for someone fondly remembering three decades of Honda ownership, beginning with a ’79 Civic and ending in ’94. But for those of you born after 1970, I’ll bet you won’t see it as an issue.

Inside, seating for five is generous, and in our up-spec Touring trim the appointments, which include leather-trimmed seats and an Alcantara-like application on the dash, is all very comfortable. There’s no sunroof, which – we’ll guess – is a casualty to weight savings, but everything else is as you’d hope it would be in a midsize sedan. Hip, leg and shoulder room are generous, and if looking for cargo flexibility the rear seat folds.

The real news, of course, is under the hood, where Honda combines a 1.5 liter normally aspirated four (103 hp @ 5,500 rpm) with an AC permanent-magnet synchronous electric motor. Total system horsepower is 212, more than enough to nudge ahead of the Prius in the next lane. Paired to a single-speed transmission, there’s little to excite beyond smooth, seamless acceleration and a relaxed cruise at highway speeds.

With the 212 combined horsepower are the more important numbers. Honda projects an EV-only range of 47 miles, which – in most commutes – will get you to work and back, but may not allow for the occasional errand running after work. But if you run out of juice, you’ll still have gas – and a 42 mile per gallon efficiency when running on gas alone. Most of our week was spent in gas-only mode, as we didn’t attempt to recharge at home, and only ran in and out of Whole Foods, never lingering over a cup of coffee or Whole Foods’ free charging. If we had, the Clarity’s anticipated full charging time with a 240V charger is 2.5 hours, and roughly 12 hours on 120V.

Also, know that if you like your vehicles ‘simple’, you should stick with your ’87 Cherokee – the Clarity, and other plug-ins in this segment, are complex engineering achievements. With Honda engineering and manufacture, we’d expect both reliability and longevity…but none of this is simple.

With prices beginning at just under $35K, and our Touring trim coming in at $37,500, there’s a lot of value to go along with the efficiency. Add a federal tax incentive of up to $7500, along with applicable incentives in many states, and you have one h*elluva good deal; when hugging those trees you could budget the occasional hotel room.

As noted, I’m not sure I buy into the Clarity’s sheetmetal, but then, I didn’t take George Jetson seriously…until I had to take him seriously.

Hyundai’s Refreshed Tucson – Raising Arizona?
Toyota’s C-HR Limited: A Renewed Focus On Youth – And Why Are We Not Surprised?
Event Calendar