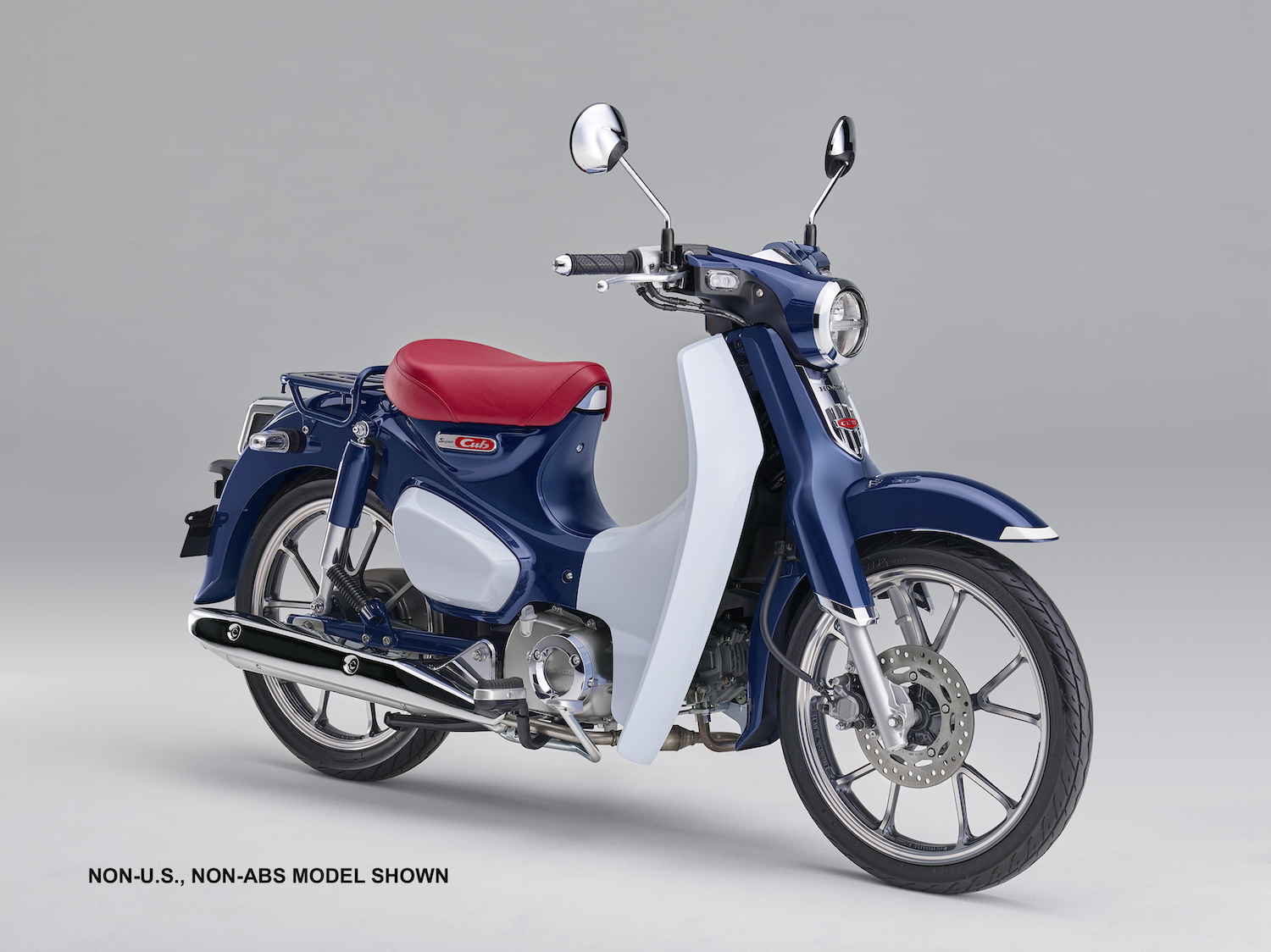 ‘Since the 1958 introduction of the first Super Cub C100 (one year before the launch of the American Honda Motor Company), the iconic model and its descendants have enticed armies of new riders to , (as) its approachable, stylish design and utilitarian performance altered people’s understanding of riding. A social phenomenon…(the Cub’s) worldwide popularity carried it to a production milestone of 100 million units in 2017, making it the highest-selling motor vehicle in the world. Although U.S. importation of the model ended in 1974, American Honda is offering the 2019 Super Cub C125 ABS in celebration of its 60th anniversary. Featuring classic Super Cub styling with an S-letter silhouette and step-through design, the little motorcycle has a fuel-efficient and quiet 125cc air-cooled single-cylinder engine, fuel injection, a comfortable seat, and ABS brakes.’ – American Honda, June 2018

Motorcycle sales in the ‘60s were fueled by Baby Boomers coming of age, grabbing their licenses and putting their part-time earnings into – inevitably – something from Japan’s Big Four: Honda, Kawasaki, Suzuki and Yamaha. These days you’d find that the experience is similar, although much more streamlined of course. A wide selection is available online at cleanharleys.com, and you should be able to find the right bike for you there. For family friend Lee Kinney (responsible for supplying me with my first ride), it was a Yamaha 2-stroke. Later, college classmates Rick and Rocky Howard got their start – and fueled my start – on Honda’s CB350 twins.

The BMW K100RS for sale is a restoration project of the BMW motorcycle that was used by Tony Buzan during the filming of the movie Top Gun. You can find parts for this bike from several sources. You can start by checking the Internet and learning about louisville car accident laws. If you are not familiar with bikes of this era, your search can be much easier if you search for images that show what BMWs were like in the seventies and eighties. If you start with that option, you can usually get the best of photographs for your restoration project.

With Japan’s invasion of the American 2-wheeled market, motorcycle ownership wasn’t an aberration, as it had been just a decade earlier. Suddenly, it wasn’t Brando’s Wild One on the big screen – it was the Mild One in the high school parking lot or on the college campus. Sixty years later, the motorcycle industry sees the Boomers that initially fueled their success aging out, while desperately wanting the Boomers’ grandkids to get on a bike.

The hopes and wishes of an industry were on full display at last weekend’s Progressive Motorcycle Show in downtown DC. The tail end of a show circuit that began last fall in Long Beach, CA and made an appearance in Dallas earlier this winter, the show – of course – is geared to the hardware (bikes) and soft wear (gear) that supports the sport. But as you’d guess, there’s an increasing awareness that to sustain the sport, especially in the crushing aftermath of the last recession, you need to grow the sport, filling the funnel with both new, young riders and (perhaps) returning riders.

Those new riders can come in a variety of forms. Kids – of course – can enter off-road riding immediately after potty training and well before kindergarten. And while women represent a growing faction of motorcycle ownership, at 19% (according to research supplied by the Motorcycle Industry Council), the percentages of women on bikes falls far short of those women elected in these last midterm elections. In short, there’s an opp for big growth. It’s also no secret that it’s dangerous to ride a motorcycle, so we advise you to view it for a motorcycle accident lawyer.

A new rider course, in partnership with Yamaha’s eBike team and Zero Motorcycles, was working the crowds at last weekend’s show. An indoor course started participants on Yamaha’s electric assist bicycles (and everyone knows how to ride a bike, right?) on an oval loop. Get the hang of that and riders graduate to a Zero electric motorcycle, its software modified to give you all of an 11-mph top speed. With protective jackets and, of course, motorcycle helmets, you’re given enough time – even as a rank novice – to get comfortable with the proposition of riding on two wheels and, perhaps more important, taking a few minutes separated from your iPhone.

And if you want to introduce your young offspring to riding, a Kids Zone Presented by Allstate did just that. Using battery assisted balance bikes, it serves as a great awakening for the independence fostered by two wheels. The bikes, built by Stacyc, seem like a great alternative to a kid’s iPad, or video games in the playroom.

Specific info on the initiative can be found at Discover the Ride’s website, while pics of both Yamaha’s eBike and Zero’s electric motorcycle are below.

Of course, the show is filled with the more conventional hardware, also. Beyond Honda’s Super Cub, the dominant Japanese OEM showed a range of street and dirt bikes, as well as an all-new side-by-side. Kawasaki’s retro-themed W800 offered an almost nostalgic appeal, while its refreshed Versys lineup was so of-this-moment. At Suzuki, a reinterpretation of its iconic Katana will hit Suzuki showrooms in the first quarter of 2020. While not as compelling as the original, the Katana update is credible – and should come with a price point that’s accessible. Just make sure you know how to handle such a big bike so you don’t end up in an accident, but if you unfortunately end up in such a situation, then you should consider contacting a motorcycle accident attorney.

Finally, Confederate Motorcycles, now under new ownership, is working to grow the brand from one of micro volumes to serious, low-volume production. While still in Birmingham, AL, new owner Ernest Lee – delivering both a CEO vocabulary and Garth Brooks vibe – suggests a physical move of the Confederate HQ. Given the branding, we’ll guess it won’t be Vermont.