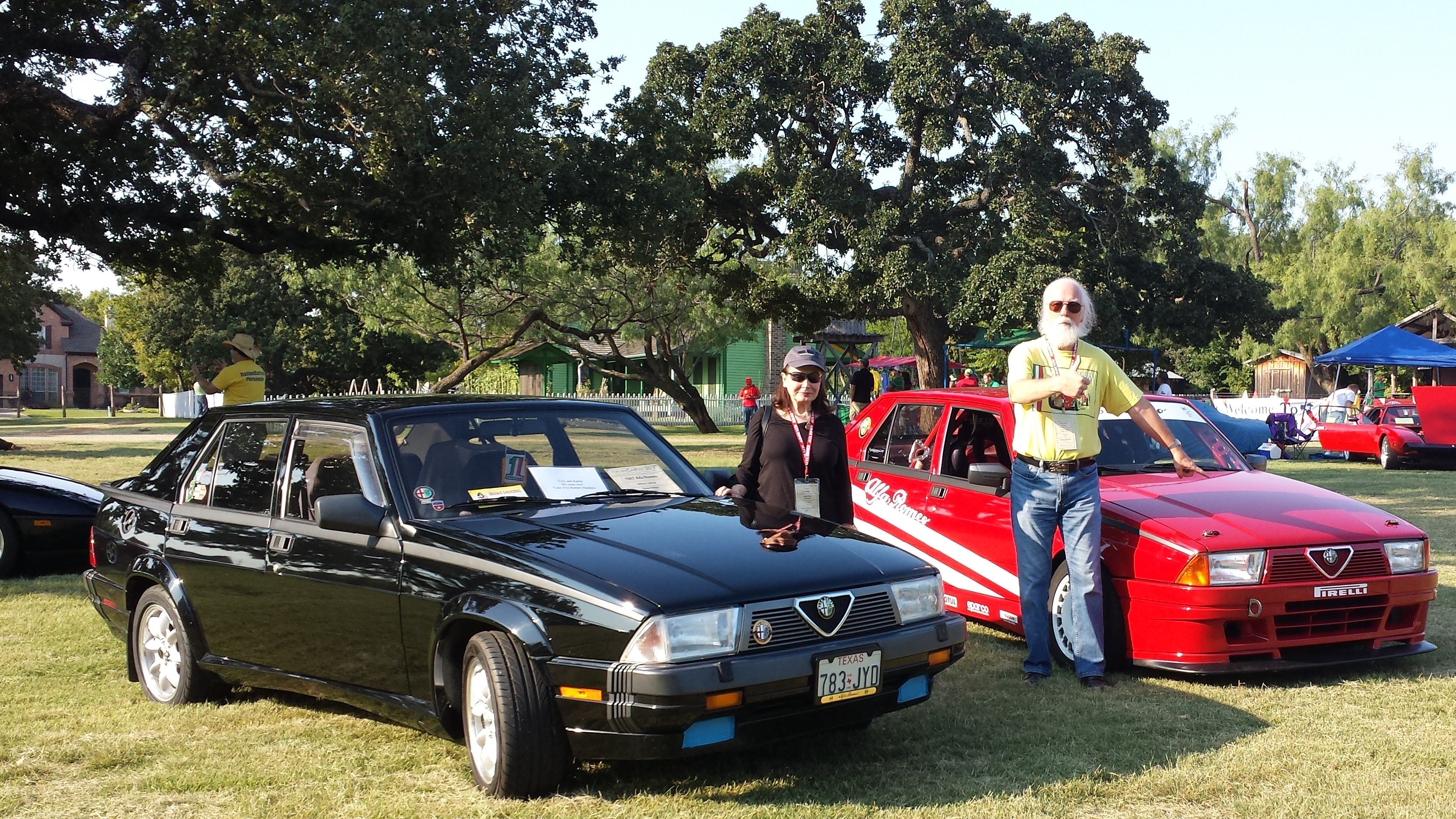 We recently purchased a 2012 FIAT Abarth. It will share garage space with our 1987 Alfa Romeo Milano 3.0 Verde. Both cars are black with 5-speed manual transmissions.  And both cars seem to have a cult following.

The ALFA:  Upon delivery at the (Fort Worth) dealership, Karen and I drove to an independent ALFA shop.  We had an oil pan guard and four KONI shocks with rear lowering kit installed. For bling we added front door air deflectors, headlight covers and a twin tip ANSA rear muffler.  The K&N air filter came later.

THE ABARTH: Since we were buying it used, we did a pre-purchase inspection at ALFA/FIAT specialists (and owners) Robert and Cindy Rodgers’ place – Shadetree – in Nevada, Texas.  The CV joints, boots, and driveshafts were in need of replacing/updating. We also found a matching 17” wheel with a new tire to carry as a spare on road trips.

UPDATES AND SOME ISSUES

THE ALFA: The ABS brake system quit at 45k miles.  A used pedal assembly and a new master cylinder fixed our stopping problems at a fraction of the cost to replace the ABS system.  The OEM wheels were replaced with Panasport wheels (with a slight offset) that are strong and can hold air…. The headliner (it’s a non-sunroof car) started to sag (Texas summer heat?) but was an easy replacement once we figured out how to get the “shell” out of the car.  The clutch assembly and driveline donuts were replaced at 98K miles.

THE ABARTH: It seems the early Abarth cars used CV joints and driveshafts more suited to the 99 hp cars…. an update to later units is the cure, and not horribly expensive.  We also had the starter replaced at 82k miles. The wire to run the rear wiper broke at the rear hatch harness connection. A quick fix of a problem that seems common on early cars.

ALFA: Arms straight out, knees bent slightly pretty much sums it up…. twist the key and hear the lovely V6 come to life.  The gauges are large and in plain sight. Not in plain sight are the power window controls. The heated Recaro seats have great side bolsters to hold you firmly in place.  The overall balance of the car is exceptional. Interior and trunk space is much better than you would expect in a sports sedan. You will need to read the owners’ book to find the trunk release… and glovebox!  Karen used this car every day for work, groceries, and tree/shrub hauling. We find the Milano is at home on a track, but the car shines on a road trip. We have been to several AROC conventions in this car from Tulsa to Ohio but the most memorable was 1998 in Santa Fe.  When traffic is thin and you can grab fifth gear the ALFA will run down the interstate all day and deliver fantastic gas mileage: a tribute to a great (1987) design that looks modern and classical at the same time.

ABARTH: Get comfy in the seat, grab the steering wheel and note the combination speedo/tach.  Turn the radio off. Rearward visibility is somewhat limited, but remember the saying: objects in the mirror are losing!  See if you can agree with the shift up arrow before bouncing off the rev limiter…. while trying to remember this is front wheel drive.

Karen’s summary: Richard introduced me to ALFA Romeo at Gary Valant’s ALFA and Mazda repair shop where I was having my RX7 “souped up”.  My first ALFA was totaled and reincarnated 2.5 Milano. I shod it with Yokohamas that were worth more than the car and happily drove it until I became aware of the 3.0-liter Milano Verde.  Jerry Kelly found my Verde, now named Gioia Mia, in Florida and shipped it to the Fort Worth dealership.

Through mostly good and a few bad times I still love the car very much.  It loves to play “lurk and leap” on the highway, and the design is timeless.  It is a beast with class. The FIAT Abarth is a totally different car… so much fun you can’t drive it without smiling.  It demands all your attention and everyone else’s attention too, with its aggressive looks and super-aggressive snarl. It’s a carnival ride that leaves you breathless and happy.  Choosing between the two would be like saying you’re going to stay in the same mood for the rest of your life. Impossible.

Richard Cross is a self-described old hippy, having grown up in San Antonio and now living in North Texas. He is a lover of old cars, motorcycles and tail-draggers, and is a 45-year member of Porsche Club of America and Alfa Romeo Owners Club. As Richard continues to affirm, it's never to late to have a happy childhood.