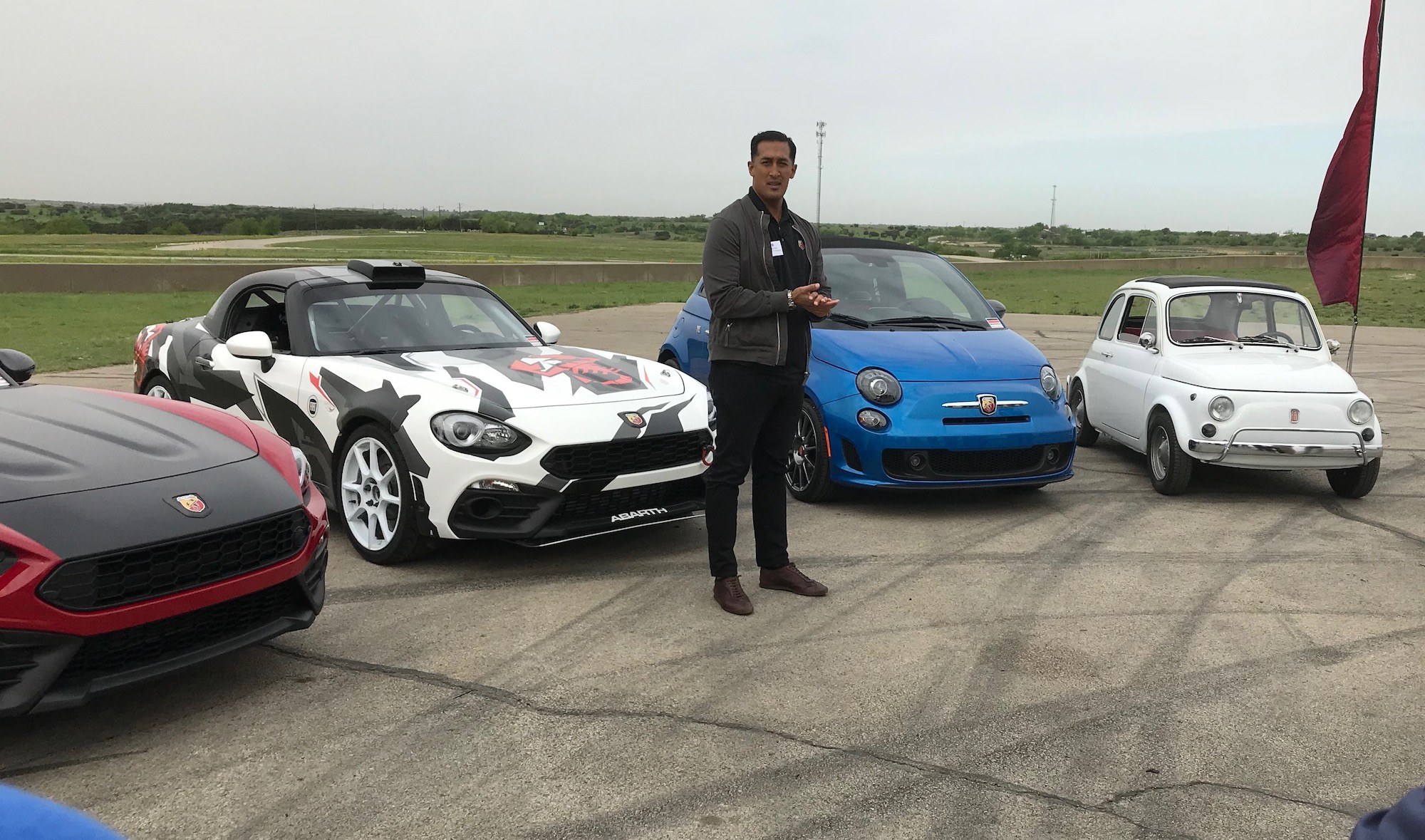 Editor’s note: Our Austin-based contributor, Alan Pease, typically covers Austin’s City Council or, if in need of a distraction, Austin’s Circuit of the Americas. And while he’s often behind the wheel, it’s typically the wheel of his Subaru, not something Eye-talian. This is the second part of his story, chronicling the track day extended to him by Fiat, and held at Cresson’s Motorsport Ranch.

FIAT 500 ABARTH: There was a time I used to go dancing seven nights a week. and I loved it. That memory came back while driving the Fiat 500 Abarth at the Skip Barber One Day Racing School last week.

The Fiat 500 Abarth might not be the most beautiful girl you see at the dance. But once you get onto the dance floor, you know why everyone loves her.

Dancers live for a partner that makes them look better than they are. The fortunate few find one. Fred Astaire found Ginger Rogers. I found the 500 Abarth.

Try as I might, I couldn’t step on her toes. She was too fast for that. And when I took a misstep, she corrected for me. A little too fast, a little too slow…it didn’t matter. You felt secure as you pitched into corners, and you relaxed as you barreled down the straightaway looking for the next apex. When you needed to do a little sidestep, you just did one. No sweat. You were both having a good time.

And yet, until I drove the 500 Abarth I really had no clue it would be that much fun to drive. Looks can be deceiving.

Durning almost didn’t get the part, because the casting director thought he wouldn’t be able to dance that scene; Durning didn’t look anything like Fred Astaire. But what the casting director didn’t know – Charles Durning was a very talented dancer. In fact, Durning could not only dance beautifully, he had been a dance instructor.

As romantic as we like to frame it, on the racetrack a car is a tool. It has a job to do. Where the Fiat 500 Abarth isn’t eye candy to everyone, the Fiat 124 Spider Abarth is exactly what I think when I think sports car.

Top down, squeeze into it, sit low, go fast. You can feel equally at home on the track or rolling through rural Texas on a warm summer night, while hoping to reach the beach before the sun comes up and bakes you into your seat.

Sports cars themselves are special. They make you feel like James Dean or Mario Andretti, even if you never get much above the speed limit. As the saying goes, they look fast sitting still. They’re designed to go and go and go some more. Sports cars are the closest thing to motorcycles you can get on four wheels.

One summer I rode my motorcycle from the East Coast to the West Coast and back. The following summer, I drove my MG Midget over the same roads. Both were fun. James Dean drove his car to the racetrack when he raced. That’s what sports cars are for, that pure, unfiltered fun. Like motorcycles. The fact that they handle as well as they do, and go fast when you want them to, is a bonus.

But in the end, it’s dropping the top and driving through the countryside that makes you fall in love. To that end, the Fiat 124 Spider brought back a flood of memories of sports cars I once owned, or had the privilege of driving. The Jaguar XK, the BMW roadsters, the 60’s Detroit convertibles. All were first and foremost – fun.

And the Fiat 124 Spider Abarth isn’t bad on the track, either. It handles well, has plenty of power and follows the line you set. At the track, we drove all afternoon, alternating between the 500 and the Spider. It was not only two different cars, it was two different worlds.

First and foremost, I’m a motorcyclist. I want to feel the sun and the wind and the elements as much as I can. Night. Day. Cold. Warm. To that end, the Fiat 124 Spider Abarth is a great car, and as close to motorcycling as I can get in an attainable sports car. It’s pure driving. And for me, it just doesn’t get any better than pure driving. Ciao!