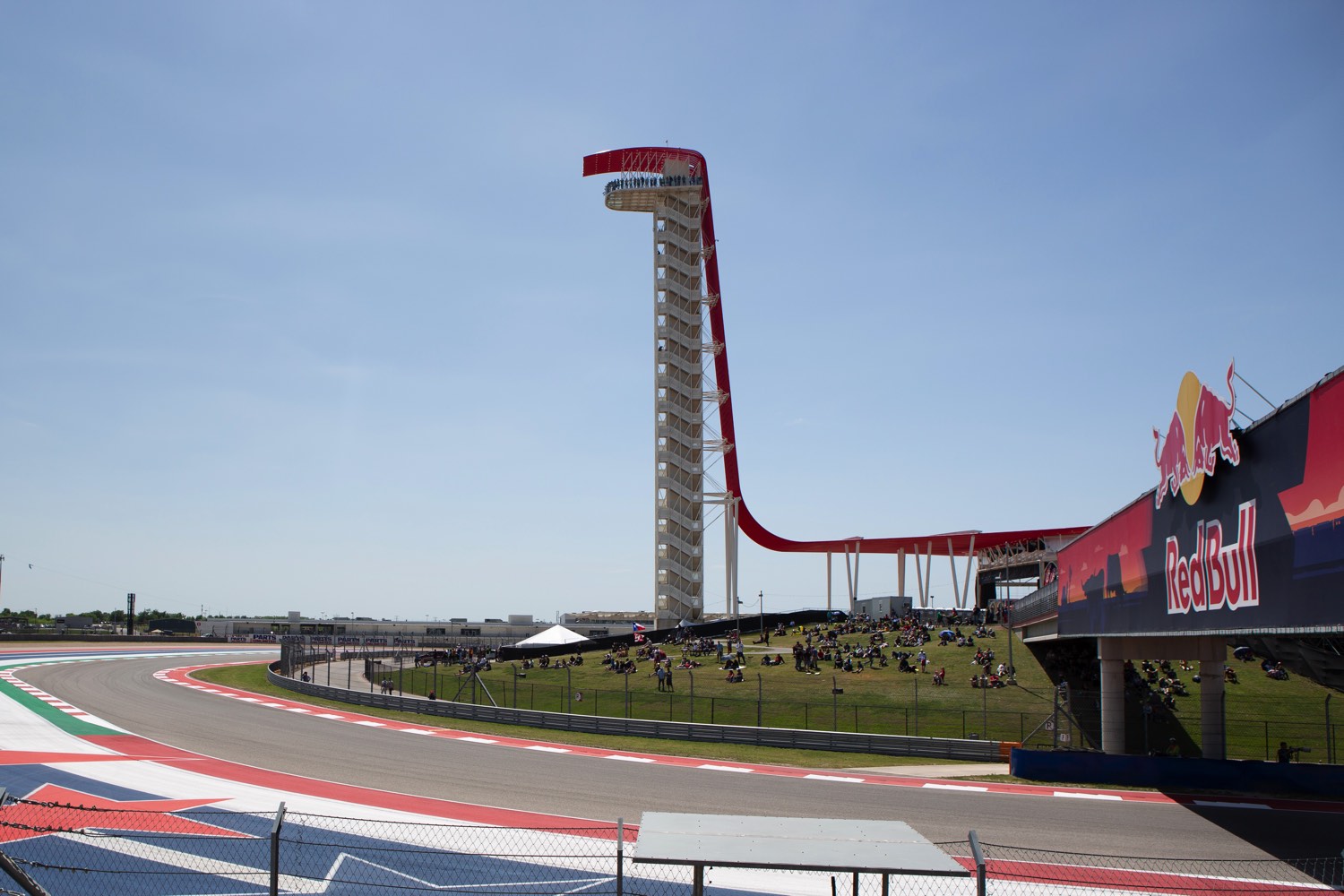 Austin, TX –Blue skies and warm temperatures welcomed race fans and riders alike to the 7th annual Red Bull Grand Prix of the Americas MotoGP, beginning in Austin on Friday, April !2th. With a complete menu of racing, including Moto3, Moto2, MotoGP and MotoAmerica Superbike, the Austin-area hills surrounding the Circuit of the Americas were once again alive with the sound of motoring music.

At noon, Nicky Hayden’s #69 was memorialized and retired from the MotoGP class. Hayden, an extremely popular rider and 2006 MotoGP World Champion, died in May of 2017 while training on his bicycle in Italy. Family, friends and officials gathered here at COTA to remember Hayden.

On-track action, which included Free Practices 1 and 2 as well as Qualifying Practice 1, 2 and Superpole for MotoAmerica Superbike concluded at 5.15pm. As expected, Marc Marquez (Repsol Honda Team) who’s won at COTA every year since the MotoGP series launched here in 2013, turned in a best lap time of 2 minutes 5 seconds in Free Practice 1, and trimmed that by 2 seconds in Free Practice 2. But Maverick Viñales (Monster Energy Yamaha Moto) bested Marquez by less than 1/100th of a second in Free Practice 2. Both riders led the next 12 riders by less than a second around COTA’s 3.426 mile circuit. It looked to be shaping up to be a good race at the end of Day 1.

From a fan standpoint, everything worked. Lots of free swag like sunglasses, wrist bands, the daily GoPro camera giveaway at 1.30pm, the souvenirs, the food trailers, the views from the COTA tower and the seating, whether it was in the grandstands or on the lawns…it was all there. In addition, OEM demo rides were available from Suzuki, Honda, BMW, Yamaha, and KTM. And this was on top of the karting track and Soaring Eagle Zipline. In a word, Friday was fantastic.

Saturday morning was a complete rainout, and teams hunkered down in garages waiting for a break in the weather. Nothing. Periodically, thunder and lightning lit up the skies and rumbled the ground beneath COTA. The Electronic billboards that normally show racers on the track, instead read ‘Seek Shelter’.

Not since 2015, when the track here was pounded ferociously on the first two days of the three day Formula 1 Grand Prix weekend and fans sought shelter anywhere they could find it, had I seen that warning go up. But this is Texas, remember, and we often see weather changes multiple times in a single day. Don’t like the weather? Just wait a few minutes…it’ll change.

While the morning weather never improved, by 12.35 the first Moto3 bikes took to a wet track, at times looking more like a series of puddles. But at least the rain had finally stopped for the day, and a wild wind was blowing the track dry, although not fast enough for some.

With rooster tails of water spraying off both front and rear tires, Moto3 riders gamely challenged the elements through COTA’s 20 turns and long straightaways. Multiple bikes went down within the first few minutes, but incidents became fewer as the riders found whatever friction points they could.

Losing the morning practice sessions definitely hurt, with Free Practice 3 missed in all classes. But skies appeared brighter over Austin in the distance, as fans tried to find a dry spot. But there were few dry spots.

By the end of the afternoon, we had bright sun, even stronger winds, and warming temperatures. In the end, it all turned out okay. Few fans left the track because of the weather. If you’ve ridden a motorcycle for any length of time, you’ve gotten wet – and probably soaked.

Malcolm Smith is often quoted as saying, “We eat, sleep, breathe, live, love and dream motorcycles”. Any day you can ride is a good one. And this day, despite the weather, was a good one.

Every day is different, and today is no exception. Conditions at COTA on Sunday morning had temps in the 40s, clear skies and no wind. It looks to be a good day to race, following a night of high winds and a day of constantly changing weather conditions on Saturday. Most importantly the track is dry today.

The first two morning hours will be filled with warm up laps for all four classes starting with MotoAmerica Superbike, and followed by Moto3, Moto2, and finally MotoGP, before the first race (Moto3) gets underway at 11:00.

We still have the MotoGP VIP Village Pit Lane Walk, the MotoGP Riders Parade, the National Anthem and the Jet Aerial Display ahead of MotoGP and the MotoAmerica Superbike Race#2 and the Fan Track Walk following MotoGP.

But it’s clear in the press room, as the talk gets louder and more and more media start to fill the tables and chairs, that MotoGP is the Big Dog here.

Can Marc Marquez get yet another win at COTA today? If he does, it will mark his 7th win in a row at COTA, the circuit stop which first hosted a motorcycle Grand Prix in 2013, which was a GP that Marquez won. In fact, it’s where Marquez won his first Moto GP race, and only the second race he raced in the top level.

Despite the clear skies and bright sunshine on this April morning, the MotoGP Riders Parade sees everyone, riders and fans alike bundled up against the cold air and increasing winds that have now reappeared. But MotoGP is still hours away.

Statistically, a quick breakdown of the twenty-two MotoGP rider line-up shows eight riders from Spain, six from Italy, two from France and one rider each from Australia, the Czech Republic, Great Britain, Japan, Portugal and Malaysia. There are no Americans, Bikes include six Ducatis, four Hondas, four Yamahas, four KTMs, two Aprilias, and two Suzukis. Track conditions at the start of the race: Air temp 64 degrees. Track dry. Ground temp of 92 degrees and humidity at 45%. Perfect.

“C’est La Vie”, the old folks say. “It goes to show you never can tell,” offered years ago by Chuck Berry.

When it comes to the actual MotoGP race, there’s nothing like being there with the fans. So, I left the media center and worked my way through an almost deserted paddock and over to Turn 1, arriving just in time to see Marc Marquez go down and gamely try and recover. But to no avail. Marquez has been leading all of the race and most of the weekend practices as well. It was hard to watch him go down. You had to feel for him. He’d won every MotoGP at COTA. He’d started this race in the pole position. He was well in the lead, as he had been on 6 previous races here. And he’d won them all. Now he was out.

Turn 1 had a huge Valentino Rossi fan base and when Marquez could not recover, they saw their man Rossi, The Doctor, now in the number one position. Rossi, aboard his #46 Yamaha didn’t disappoint. A cheer went up for Rossi, and got louder each time Rossi passed Turn 1. But turn 1, the long uphill, and demanding 180 degree turn that opens COTA’s series of corners, chicanes and straightaways, is only one of many obstacles in the path to a podium. Could Rossi maintain that lead? Right behind him was Alex Rins aboard a Suzuki. The answer to the question? No.

Alex Rins, like Marc Marquez, was about to do what Marquez did six years ago: Rins was about to win his first MotoGP race, and win it at COTA. Rossi would finish 2nd and Jack Miller, aboard a Ducati, would finish out the podium.

Rins won in 0:41:45.499. Rossi finished back +0.462s. Jack Miller was a full eight seconds back of Rins. Rossi made a desperate effort to pass Rins in the last lap, and the crowd went wild watching it. But in the end, the day belonged to a young Spaniard, although not the one I think most people had envisioned. It was a great win for both Rins and Suzuki. Our congratulations to both!

They earned it, and they deserved it. Racing is all about overtaking the odds against you. Planning and performing. All that was evident at the 2019 Red Bull Grand Prix of the Americas at the Circuit of the Americas, in Austin, Texas. And the race fans knew it. They had come hoping to see great racing and they got great racing. And not just in MotoGP, but in all classes.

It was one helluva weekend of racing in Texas. We can’t wait until next year…and hit repeat.