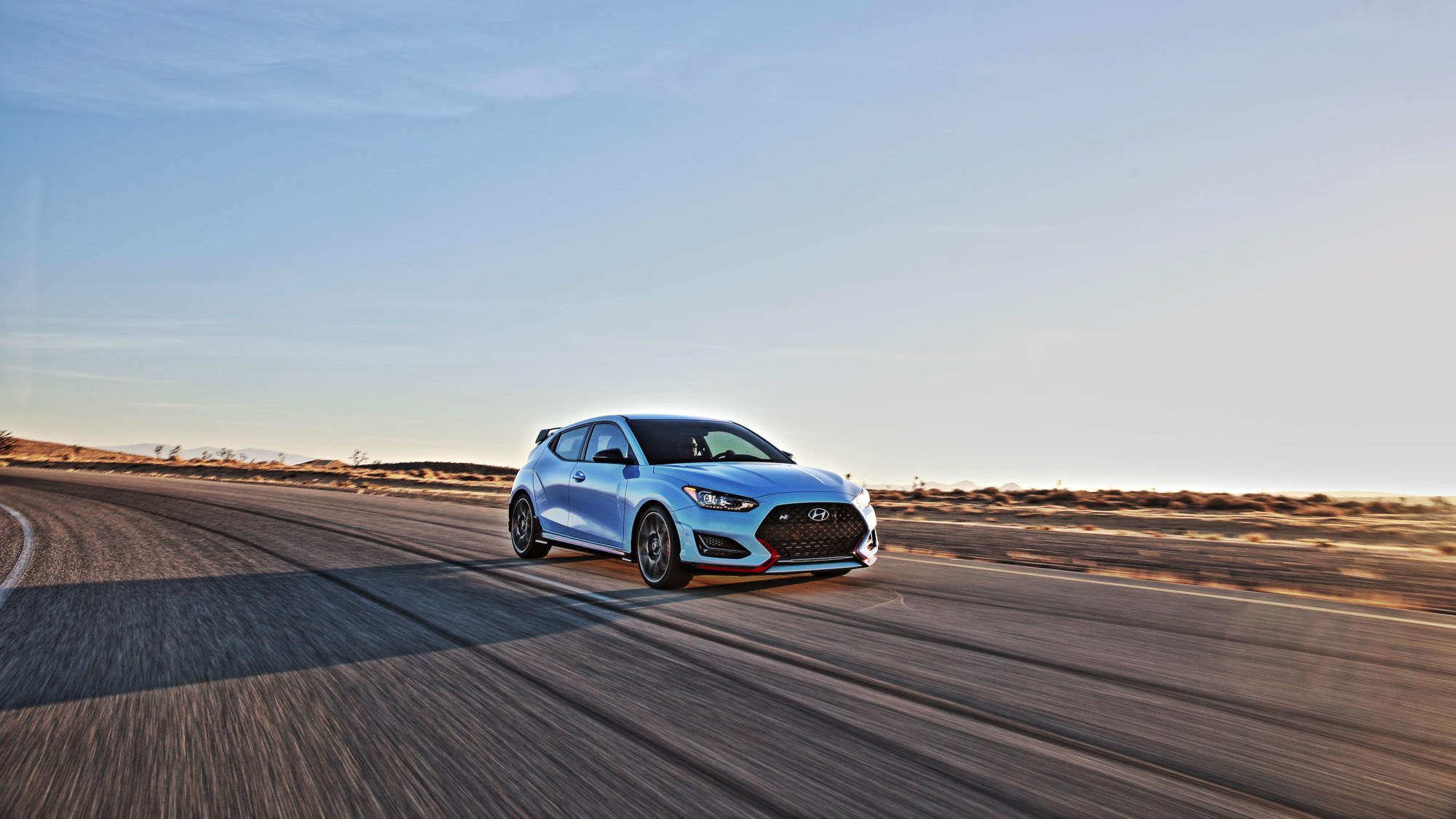 Let’s get this out of the way from the git-go: With its new Veloster N, Hyundai hasn’t reinvented the wheel, nor has it shifted any automotive paradigm. Since before World War I carmakers have been adding lightened bodywork and/or more horsepower to their volume offerings. From Alfa to Volvo, those in need – or perceived need – of more performance or stylistic differentiation have been able to buy it, but for whatever reason Korea, Inc. has been reluctant to offer it. With its Veloster, Hyundai offers more style, and with its recently launched Veloster N the Korean carmaker offers way more performance.

I’ve had Hyundai’s Veloster in the driveway before; in its 1.6 liter, turbocharged form the 2+2 represents quite the ride at a purchase point in the low $20s. The sheetmetal, although you couldn’t call it rakish or leading edge, has a fun, spontaneous edge that its Elantra cousin can’t quite muster, while its 3-door (plus hatch) formula supplies a respite from the contortions necessary to get a 6-year old grandson into a 2-door coupe. And while the 200 (or so) horsepower of the 1.6 doesn’t quite put the Veloster into hot hatch territory, it makes a credible attempt at being a warm hatch, with a get-up-and-go character that Subaru’s BRZ is hard-pressed to match.

In a country, however, where social stratification is the norm, there’s always that 1% that want to do something – anything – with their tax cut. And for those folks, contemplating what I’ll guess is the tenth or twelfth car, Hyundai has created the Veloster N. I had one, and I’m here to tell ya’ – it’s both Naughty and Nice.

In its footprint and stance, the Veloster N recalls – at least for me – what Fiat did in the early ‘70s with its 128. Available to the bourgeois as a two or four-door sedan, the folks in Turin conjured up a 128 Sport for those willing to give up space for at least the suggestion of pace. Fiat billed it as ‘the one car for all the lives you lead’, and that’s a credible claim for Hyundai’s Veloster N – a helluva lot of sport, with just enough utility to make the daily grind less of a grind.

As the press info tells us, the Veloster N was born in Namyang, which serves as Hyundai’s global R&D center, and attended finishing school at Hyundai’s Nurburgring-based testing center in Germany. Nurburgring, of course, provides the happy happenstance of serving as ‘the’ choice for establishing performance benchmarks, and is also well outside Kim Jong Un’s launch capabilities. You could probably do the same development work at Cresson’s Motorsport Ranch, but the Ranch won’t have the Nurburgring’s selection of bier.

The ‘N’ development team, headed by former BMW exec Albert Bierman, ups the Veloster turbo’s power by almost 50 (250 vs. 201), and adds to that horsepower enough design and handling differentiation to justify the additional $4K (over a Veloster R-Spec) the N customer will invest. And while we didn’t drive the base Veloster N, we can guess it’s all anyone would need to put a smile on the face of the driver, and a ‘what-the-hell’ scowl on the face of his or her significant other.

But it’s with the $2100 performance package that Hyundai attempts to hit it out of the park. The 275 horsepower and accompanying 260 lb-ft of torque puts the Veloster N in Golf R territory, absent the Golf’s all-wheel drive. The performance pack also adds a limited-slip differential, variable exhaust valve system, 19-inch Pirelli P Zero summer tires, and bigger brakes front and rear. You can count us as mightily impressed with all of the above.

However, if I were on Hyundai’s product planning team I’d include that 275 horsepower in the basic spec, along with everything else listed except for the 19-inch wheel package. To my way of thinking, an optional performance package – even it that meant a $5,000 cost of entry – should provide an 300 horsepower, performance-oriented all-wheel drive and, in a perfect world, an available roll cage. In that guise the Veloster N would be just the thing for track days, while still able to drive it to the track. And in the enthusiast world of Club Sports and Hellcats, $35K for 300 real horsepower is a viable economic model.

While Hyundai’s team considers that, I’ll ask for more color availability for today’s offering, along with – I think – a long-term loan.