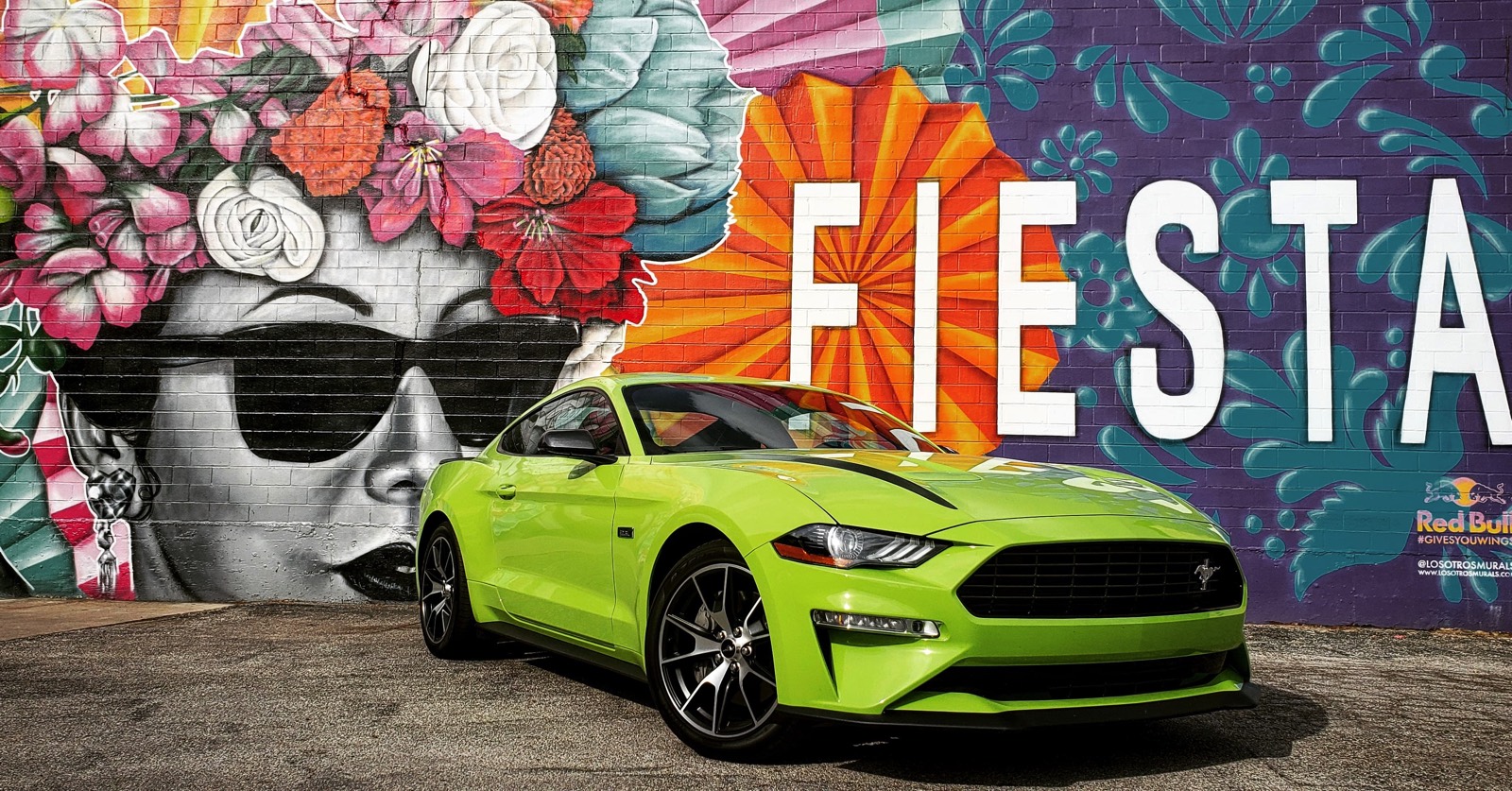 A PUSHROD CONSERVATIVE: I’m a pushrod conservative when it comes to what a muscle car should be. A muscle car must be rear-wheel drive, have no more than 5-speeds with three pedals, and eight cylinders with intermittent explosive disorder under the hood. Every Mustang I’ve tested up until now has been V8-powered with a manual transmission. Recently, I had a chance to get to test a pre-production 2020 Ford Mustang 2.3L High-Perf EcoBoost with a 10-speed automatic. Being a conservative when it comes to muscle cars means I’m guilty of frowning or scoffing at modern non-V8 pony cars. I roll my eyes at the sound of a buzzing NS95 V6 Mustang in the distance, or seeing a Pentastar Charger hiding behind a fake Hemi badge. I could not bring that opinion to this review. I had to leave it all at the door before stepping inside the 2020 Ford Mustang High-Performance EcoBoost. It felt like trying a soy burger for the first time. You want to like it because it would mean a suitable alternative, another option, and a sense of hope that the future will be okay. This turbocharged 4-cylinder, automatic, 2020 Ford Mustang was my soy burger – my impossible muscle car.

EXTERIOR: The pastel green on this 2020 Ford Mustang EcoBoost is called Grabber Lime. The color lives up to its name, as I observed people’s heads follow the Mustang like a cat’s eyes to a laser. I caught a roadside construction worker pucker his lips as if he was whistling when he spotted the car in traffic. The vanishing metallic grey hood stripes are a nice touch to break up the sea of green, and give onlookers a hint that this Mustang can – and will – kick.

A small badge replaces the 5.0 emblem on the front fender and it reads “High- Performance 2.3Liter EcoBoost”. The premium grille upfront is what I like most about the 2020 Mustang EcoBoost. It allows the car to look premium on the outside rather than just the inside.

INTERIOR: The badge on the glove box read that this pre-production 2020 Ford Mustang was #10 off the line – I thought that was pretty cool. Anyway, this 2020 Ford Mustang EcoBoost also came equipped with a premium interior package which included leather-trimmed RECARO bucket seats. Stepping in and out of the RECARO seats did take some getting used to, as I had to climb over the side bolster. However, once a driver flops down into these buckets you get a sense of security, as they cradle you in their embrace, and soften any expected G-forces. Over a week-long test I discovered that the RECARO seats are comfortable up until the 3rd hour of sitting. That’s when my lumbar started requesting immediate support.

I liked that Ford did not stick an automatic dial shifter in the 2020 Mustang EcoBoost, unlike its body builder brother, the Shelby GT500. You still get a standard PRNDL lever and additional paddle shifters on the steering column to flick through the 10-speeds offered in the EcoBoost Mustang. A standard 6-speed manual transmission is offered for both EcoBoost and 5.0 2020 Ford Mustangs.

According to a personal injury lawyer, safety features include a variety of airbags to keep passengers safe from harm. Front seats get standard front airbag, side impact airbag, and the driver gets an additional airbag to protect the knees. All around, the 2020 Mustang is equipped with a side curtain airbag to protect passengers from side-impact and rollover accidents. If you unfortunately get into an accident, then don’t hesitate to get legal help from auto accident attorney services and a personal injury lawyer if there are any injuries.

2.3L ECOBOOST HIGH-PERFORMANCE PERFORMANCE: The 2020 Ford Mustang 2.3L High-Performance EcoBoost breathes fire using a 2.3 liter double overhead cam, turbocharged 4-cylinder producing 330 horsepower (at 5,500 RPM) and 350 ft-lb of torque (at 3,000 RPM). These specifications are according to the 2019 model 2.3 liter EcoBoost, since this 2020 preproduction model did not come with specific numbers. The 2.3L High Performance Package in this model is a $4,995 option that bumps the standard 310 horsepower to 330 and includes:

Driving the 2020 EcoBoost Mustang felt like my senses were receiving mixed signals. My eyes saw a Grabber green Mustang, but my ears heard a buzz instead of a rumble when I hit the ignition button. The 2.3L High-Performance EcoBoost engine sounds like a bumble bee doing its best Sam Elliott impression. It’s not a bad sound, but it made me think of a JDM sports car. It made me think of a Toyota Supra.

Sport Mode in the 2020 Mustang is where the EcoBoost shows-off. Switching from Normal to Sport while driving allows the driver to feel the EcoBoost Mustang tense up and fold back its ears as it goes on full alert. The EcoBoost’s angry buzz turns into a roar past 3,500 RPM. Upgraded brakes are felt even under normal conditions, as they bite hard and fast under minimal pressure but allow enough pedal travel so that you don’t turn passengers into human bobble-heads while running errands.

The 2020 Mustang 2.3L High-Perf EcoBoost delivers its 330 horsepower direct and pulls you with conviction. I was pleasantly surprised by its power as the Mustang glides forward with ease. Put your foot down and there is a moment of hesitation before the Mustang reacts, but its but a brief moment. That could be due to the electronic throttle or turbo lag, but the fact of the matter is that the 2.3L EcoBoost engine produces more than enough power to curl lips into a smile as it sends waves of torque down your spine, pushing you into the RECARO leather seat’s back.

Pricing for the 2020 Ford Mustang EcoBoost Premium (according to Ford.com) start at $26k for standard EcoBoost Fastback, and $31k for Premium High-Performance EcoBoost Fastback. After building a 2020 EcoBoost Mustang on Ford.com with the same features as the model tested the final MSRP was a few dollars short of $40K, which seems high for a Mustang with a turbo four banger.

The 2020 Ford Mustang High Performance EcoBoost EPA rating (again, according to the 2019) is 20 city and 28 highway for an average of 23 mpg. I drove the car on several road trips totaling over 850 miles and averaged 24 mpg. The Ford Mustang offers several drive modes, yet none of them are for Economy, which I find surprising considering that even a Challenger SRT Hellcat offers an ECO Mode. Don’t expect the EcoBoost Mustang to be a sporty gas-saver just because it’s not a V8. This is a performance Mustang – not a mule.

FINAL THOUGHTS: There is plenty of satisfying soy-based hamburgers on the market today, but I’ll still take a plain beef patty on bread if given the option and it’s the same story with the Ford Mustang. While the 2.3L EcoBoost delivers tire shredding performance I couldn’t bring myself to choose it over a 5.0 V8. It has nothing to do with performance and more with preferring the sensation of feeling eight cylinders vibrating under your seat. Hearing the steady bellowing rumble from a V8 on the highway can make you feel like your piloting a WW2 fighter plane – balls to the wall.

The 2020 Ford Mustang needs an ECO mode for owners that want to save fuel during daily commuting. I find it odd that in the year 2020 a sports car with a turbo 4cylinder engine can’t average 30 MPG on the highway. The leather RECARO seats look great, but need some sort of lumbar support to reduce fatigue during extended periods of driving – like driving 200 miles from San Antonio to Houston, TX.

The pricing and performance for the high performance EcoBoost Mustang means that the EcoBoost is an equal alternative to the V8. The times they are a changing and the era of “no replacement for displacement” is quickly going out of style. Yes, the 5.0 V8 has130 horsepower more than the High-Perf 2.3L EcoBoost, but when it comes to normal daily driving when will you actually notice the difference?

What I’m getting at is that a standard 5.0 V8 Mustang with a 10-speed automatic, SYNC, and 19-inch wheels was priced at $43k compared to the $39k for the High-Perf EcoBoost (according to Ford.com Build and Price tool). Choosing a power plant for your 2020 Ford Mustang can come down to simply having a preference in the sound that comes out of its duel exhaust.