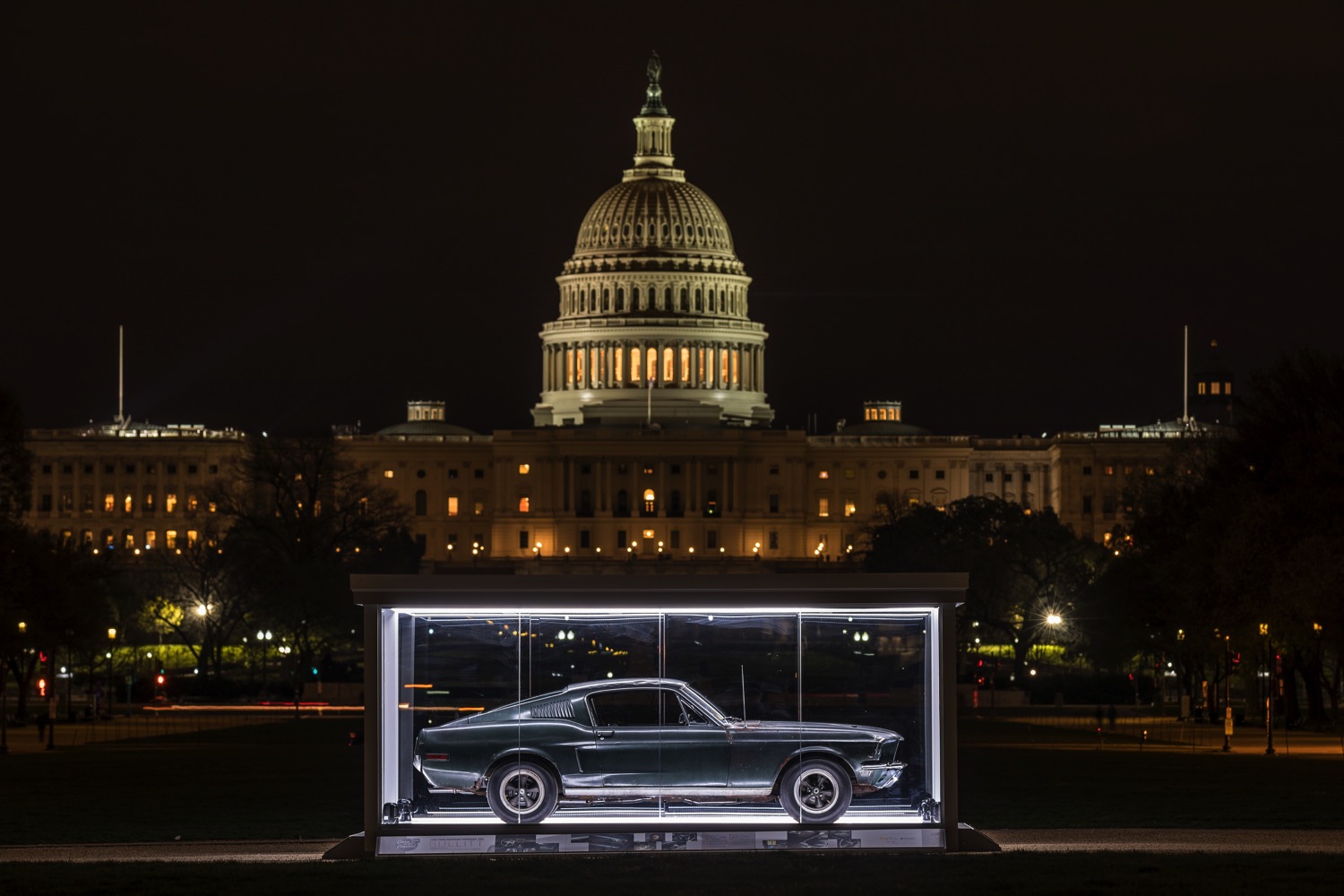 Number One, with a Bullitt

Today, the original Bullitt Mustang goes on the auction block, creating a bookend to a pop culture process that began with the filming of the McQueen movie almost fifty years ago. We took this look at the now-iconic Mustang in April, 2018.

Washington, DC – It was, if speaking to truth, an interesting juxtaposition. At Washington’s National Mall, on a mid-April morning with a wind chill that defined ‘chill’, the Historic Vehicle Association was confirming what we all knew: Ford’s Mustang, especially when piloted by Steve McQueen in a noisily epic film, resides at the epicenter of pop culture, transportation history and our collective fascination with internal combustion. Displayed within what one speaker described as the world’s ‘smallest auto museum’ (think single wide, no longer than the car itself), McQueen’s Bullitt Mustang will hold pride of place on the Mall, immediately opposite the Smithsonian’s National Air and Space Museum. That museum – of course – offers another historic Mustang, using ‘P-51’ as its prefix.

The Bullitt Mustang display, part of the Historic Vehicle Association’s month-long Cars at the Capital celebration, would not have been possible if the Mustang’s owner, Sean Kiernan, had not contacted Ford two years ago, seeking help in authenticating his Mustang. Owned for some 40 years by his family, the Mustang had been used by the Kiernans as a daily driver. Later, it was relegated to storage, placing it in the unique purgatory that exists for cars no longer in use, but also not being restored. For better (we think) or worse, the Bullitt on display hasn’t benefited from a $200K rotisserie restoration; rather, it looks to have received little more than an oil change and (maybe) a tank of gas.

Even on the flat expanse of the National Mall, with the Capitol in the background and the Air and Space Museum to the right, your eye and mind are taken to the undulations of San Francisco, the heat of the chase and the cool of McQueen. And despite five decades since the film’s release, for those remembering the movie from repeated viewings the fifty years seem more like fifteen. McQueen is still lean and focused, and that same descriptive applies to his Ford.

To the credit of Ford Motor Company, they had staff on the Mall, and a hosted brunch for attending journalists after the event. But they didn’t invade the space taken by the Historic Vehicle Association or the Kiernan family. It was their moment (and maybe Warner Bros.); Ford graciously – and strategically – recognized that.

Afterward, journalists tapped into the wisdom of Carl Widmann, chief engineer for the Ford Mustang. Mr. Widmann beautifully articulates the dynamic that is today’s Mustang, describing how the newest Bullitt is both influenced by – and departs from – its celluloid prototype. The new Bullitt is beautiful and, if rumors are believed, will probably sell for around $50K plus, of course, the obligatory dealer markup. Without the markup the new Bullitt is a screaming deal; McQueen’s – of course – is priceless.

CES News – an Automotive Reviewer looking at the Sony’s Concept Car the “VISION-S”
A TOTAL LOSS IN SAN ANTONIO – EXCEPT, OF COURSE, FOR THE ATTORNEYS
Event Calendar