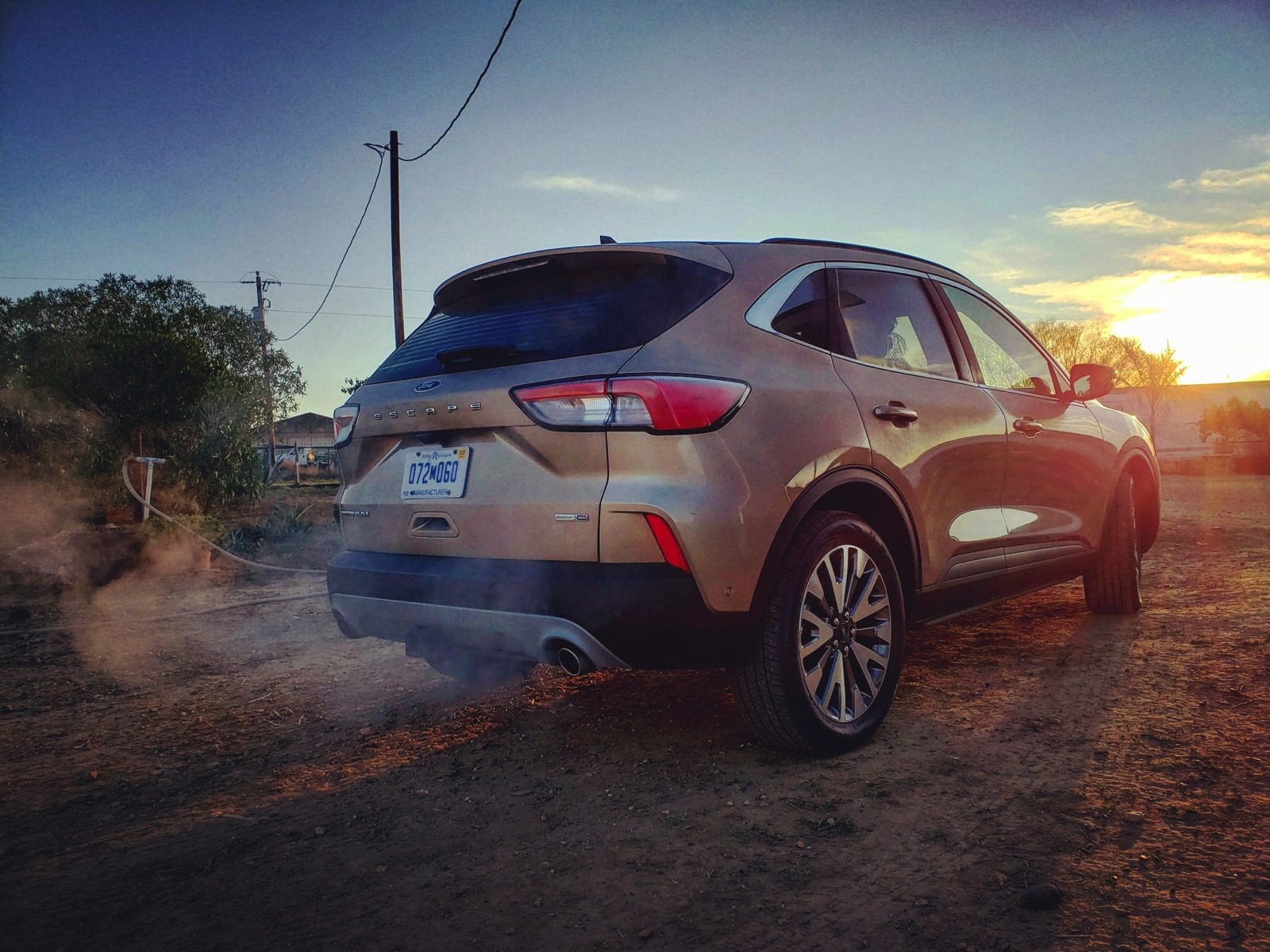 Back in the 90’s, people thought car-based SUV’s wouldn’t sell. But just like the Pet Rock, Amazon.com, and the latest Sonic the Hedgehog movie – they were wrong.

Car-based SUV’s (which the industry now calls crossovers) like Toyota’s RAV4, Honda’s CR-V and Ford’s Escape have been in production for over two decades, and all have gone through several iterations. Ford kicked off 2020 with the debut of an all-new Ford Escape. The previous generation began in 2013 and didn’t get a refresh until 2017, but this 2020 Escape has been completely redesigned. Ford caters to a wide spectrum of CUV buyers with five different trim levels and multiple configurations with engines and drive systems. For this review I tested the top of the line 2020 Ford Escape Titanium trim with available all-wheel drive.

EXTERIOR: Remember when Ford introduced a redesigned Fusion and the internet said the front end looked like a commoner’s Aston Martin? Well, the 2020 Ford Escape sort of looks like Aston Martin’s first SUV, the DBX – especially around the eyes. Obviously both these vehicles are several tax brackets apart, but sort of looking like an Aston Martin is never a bad thing. This specific 2020 Ford Escape sported Desert Gold Metallic paint with 19-inch aluminum wheels. It managed to look elegant in the city and at home in the countryside. The new Ford Escape is always smiling.

INTERIOR: Inside, the driver is greeted by a leather-wrapped steering wheel and leather-trimmed seats. The Ford Escape can seat up to five adults, of which four will be comfortable. During my week with the Escape, I visited my extended family and toured around several cities across South Texas. Everyone who took a ride in the Escape ended up commenting on how spacious its rear seating was. The panoramic roof adds to the luxury the Titanium spec conveys. This compact CUV comes equipped with ten speakers powered by a B&O audio system.

You also get heated steering and seats, but they are not ventilated (cooled), a shame in the midst of an approaching Texas summer. Rear storage is substantial, with rear folding seats that can definitely hold a college freshman’s entire life when reloading the dorm…or returning home. Of course, you get a hands-free liftgate for those one-trip-or-die grocery bag workouts.

My favorite feature on the 2020 Ford Escape is the digital instrument cluster. Push the keyless start button and the Escape displays a scenic landscape of an open road leading to a horizon full of snow-capped mountains. It evokes a sense of calm and a desire to, well … escape. Hit the road and get away from the grind of daily commuting. It’s a moment of Zen that I welcomed. Each of the five drive modes also displays a beautiful animation relating to its purpose. Images do not do it justice; in person these displays look as crisp as the display TV section at Costco.

PERFORMANCE: Ford gave the all-new Escape three engine options. Lower trim levels offer a 1.5-liter turbocharged, DOHC 12-valve, 3-cylinder engine. It’s the same engine offered in the smaller Ford EcoSport, rated at 181-horsepower and 190 lb.-ft. of torque. Hybrid models are powered by a 2.5-liter Atkinson cycle, DOHC 16-valve, 4-cylinder engine with a liquid-cooled 1.1-kw-hr battery back. Hybrid models make a combined 200-horsepower. The most powerful engine for the 2020 Ford Escape is the 2.0-liter turbocharged, DOHC 16-valve, 4-cylinder engine. An 8-speed transmission powers both gasoline engines, with the hybrid getting a CVT.  And here’s Motor Trend’s take on those three choices.

The Titanium Escape tested in this review had the 2.0-liter turbo engine. If I had to describe the Escape’s performance in one word, it’s peppy. This Escape can hit 0-60 in 6.9 seconds. To put that in perspective, 50 years ago a 1970 Ford Mustang 428 Cobra Jet needed 7-liters of V8 making an (underrated) 335-horsepower just to hit 0-60 in 5.9 seconds. The All-Wheel-Drive system offered in the Escape also gives it a decent towing capability of up to 3,500lbs.

The Escape will run if you press down on the gas pedal, but only after a moment of hesitation from the engine. Ford programmed the Escape to be frugal with its fuel, meaning the transmission is always trying to shift to its highest gear as soon as possible. When you command the Escape to run the engine needs to reevaluate its priorities before accelerating. The hesitation is brief, and afterward the Escape gets light on its feet. It does feel quicker than it looks. Light steering makes zipping through traffic easy-breezy.

Paperwork with this model did not include official MPG ratings. However, I drove this 2020 Ford Escape Titanium for nearly 800 miles and averaged 28 mpg. Not bad, but I was hoping for at least 30 mpg – maybe my expectations were set too high. Motor Trend tested the smaller 1.5-liter engine and they rated the 3-cylinder engine as 27 city /33 highway.

PRICING: The price range for the Ford Escape starts at $24k for the S and can go over $40k with an optioned-out Titanium model. Hybrid models start at $28k, and Titanium spec start at $33k. An official MSRP was not included with this test model, but based on the options I would guest-estimate if you saw this car at a dealership it would be wearing a $36k (or more) price tag. That’ll seem high when you look further down the dealership lot and find a bigger 2020 Ford Edge SEL, which according to Ford.com starts at $34k.

FINAL THOUGHTS: The 2020 Ford Escape Titanium is a nice driving crossover that looks contemporary, performs as advertised, can tow a small trailer, and provides good space and value. Everyone in my daily life really enjoyed riding in it. The battle to decide which manufacture builds the best CUV is a trench war with an ever growing no-man’s land of panoramic sun roofs and USB ports. The new Ford Escape protects Ford’s spot in the segment, while quietly elevating your expectations.