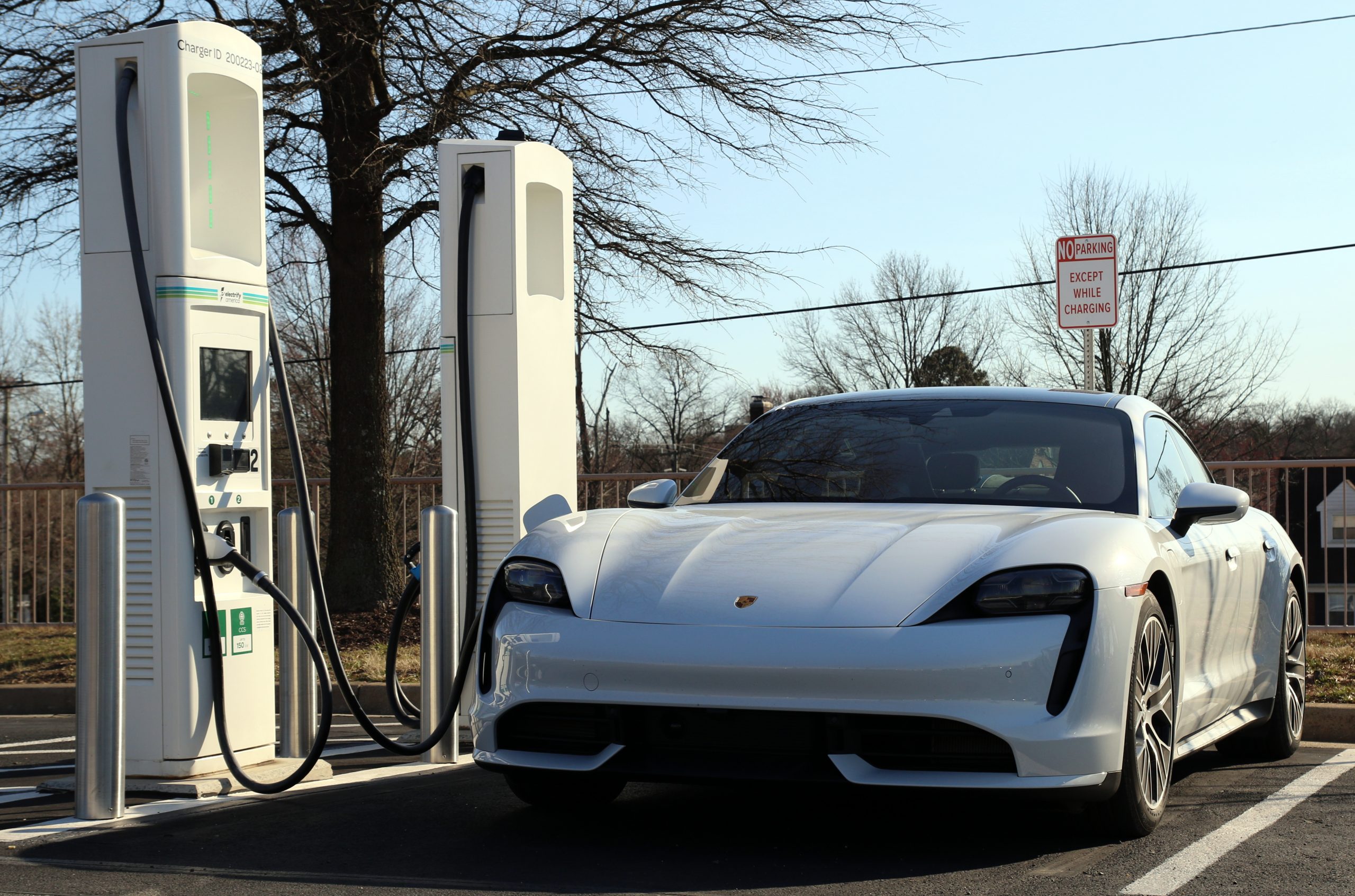 HOW FAR CAN YOU GO?

Casey Parkin is a Certified Porsche Sales Manager at Porsche Silver Spring in Silver Spring, MD.  He is an avid car enthusiast and Dog Dad.

A number of years ago I wrote an article covering Porsche’s 918 for der Vorgänger, the monthly magazine published by the Porsche Club of America’s Potomac Region. It was my second introduction to the electrification of a Porsche.

My first experience was in Park City, Utah in the fall of 2013. A colleague, Linda Harouna, and I traveled there for the introduction of the second Panamera. The exciting part of this launch was the addition of a plug-in hybrid. This was big for us in the Porsche world. (As you may know, it took Porsche forty years to put a cup holder in a car.)

Fast forward to 2020. My father recently moved to Florida. I had not seen him for a few months and was looking forward to spending the day together. Typically, when hanging around the house my dad is always fixing something (he is remarkably handy); in order to keep us out of the house I figured some sort of road trip was warranted. Why not test the range of a Taycan Turbo? The EPA states 201 miles, while Porsche had independent testing verify in the mid-260 range. I was excited by the challenge of seeing what the Taycan could do in a real world environment.

I knew this would start with at least a moment of vulnerability. I have terrible range anxiety. As always, I had begun planning where we would go on our road trip a few days prior. My first choice was Bear Chase Brewing Company in Bluemont, VA. This place is gorgeous; in driving to Summit Point, WV (and its track) in recent years you passed right by it. Bear Chase overlooks a beautiful valley, features a pretty good food truck and a good selection of beer. I wasn’t going to be drinking in the middle of the afternoon while driving our Taycan, but I figured it would be a good midpoint for a U-turn and food. I typed in the coordinates in Google Maps and it calculated the trip to be 60 miles from my house. I live 33 miles from Porsche of Silver Spring (Maryland), where I was picking up the Taycan. So, 93 miles (at a minimum – from leaving work) and another 60 to return home, a total of 150 miles. I then had until midnight to pick my wife up from the airport; say another 20 miles, now totaling 170 miles and another 33 miles back to work. That is 203 miles. Remember, the EPA rates this car at 201 miles. The most we had put on the car prior to recharging it was 120 miles, but those had been test-drive miles showcasing the different driving modes, and aren’t reflective of real-world conditions.

Something then dawned on me. Electrify America had just put in a charging station at a Target, about three miles from my house. Why not try that out, too? I signed up on the app and put in my credit card info. Keep in mind that if you purchase (or lease) a Taycan you receive up to 30 minutes of free charging per day for 3 years. Despite the addition of this new charging station, I decided I should also go to a brewery that was closer than planned. Vanish Brewery, in Lucketts, VA, is roughly 42 miles from my house. That math made more sense and I could possibly do it all without going to a charger.

Saturday at 6:05pm I set off from work. I drove straight home and parked the car. I left the dealership with 1150 miles on the car, a projected range of 249 and a state of charge (SOC) of 94%. The greatest projected range we have seen for our Taycan Turbo was 267 miles with a 99% charge. I parked the car at home. In the morning, forgetting that it was daylight savings time my dad woke early, and had no idea what was sitting in my driveway. He knew Porsche made an electric car but didn’t know more than that. His prior experience in electric cars was driving the Cayenne Hybrid at a Summit Point driving event. Boy, was he in for a surprise!

After a quick donut run we loaded up the Taycan with a dog bed (bringing Ellie, my 3-year-old Cavapoo), some water, my camera and my father. We headed through the first toll booth and I set the car to “Range” mode, which limits the speed to 70mph. Keep in mind that you’re able to adjust the speed in Range mode up to 90mph. The 70mph limit is doubly a good thing, as it seems that every time I drive the Taycan I am tempted to maintain go-to-jail speeds. The length of the Dulles Toll Road and the few miles up Route 15 was the longest I had driven a Taycan in one stretch. Our car was equipped with 14-way seats that are almost infinitely adjustable. I am very particular on seating – these fit me very well.

The Taycan gets a lot of looks; pulling into the brewery’s parking lot necks snapped. The car that led us up the gravel driveway was a Chevy Volt, and there were three or four Teslas spread throughout the lot. We unloaded Ellie and headed in. A great food truck was there, and we split a Peruvian Chicken Hoagie, one of the better food truck sandwiches we have had!

The ride back was taken along Route 7 to 28 South, to 50 East and then 66 East. We finished up back at the house with 1293 miles on the Taycan Turbo and 41% charge remaining. I drove the car sensibly, as I would drive the car that I drive every day. I wasn’t hypermiling and I certainly wasn’t trying to squeeze every last mile out of the Taycan’s 93.4kWh battery. According to my math that would equate to a full SOC, giving us a run of 269.8 miles if driven similarly under similar conditions (ambient air was in the low to mid 60s).

After my dad headed out of town I took the Taycan over to the Electrify America station and decided to head into Target to look at the latest Hot Wheel offerings. The station was empty. I fumbled with the super heavy-gauge wired plug that goes into the passenger side of the Taycan. You can charge on both sides, but the DC charger is on the passenger side. I struggled for a few minutes to get my phone to connect to the charger and eventually gave up. This was the only issue with charging. Perhaps it was my phone or maybe it was the proximity sensor of the charger. The easiest and most time effective solution was to swipe my credit card.

Since I wasn’t waiting for the car I opted for text message updates and pressed go. With this charger I was billed $1 for initial hook up and 89 cents per minute charging. I figured I would give it a half-hour and then come back. The first text showed that I pulled in at 38% battery and it was unable to estimate when I would get to 80% SOC, it was received at 16:14:34.

I honestly had no idea how fast the car would charge. The range estimate climbed to 256 miles by the time I sat back down. This was impressive. I had been concerned about this entire day of travel and in 30 minutes I had gained roughly 155 miles of range. Keep in mind that this would have been free if the car was properly registered to an owner through Porsche Connect.

After a few days of considering those 24 hours, I realized that my range anxiety was entirely unnecessary. The car had a lot more to give before I plugged it in, almost 100 miles. I run my daily driver, an Audi, to within 5 or 10 miles of empty before I fill it up. If I were to own an electric car I would make it a priority (at time of ordering it) to begin planning the charging infrastructure at home. Porsche recently teamed up with Amazon to do at-home installation of your electrification items. In a few weeks I will receive formal training from Porsche and will follow on this article to cover many more items pertaining to the future of Porsche electrification, and more specifics on the engineering of the Taycan that may not have been covered in the news.

This article originally appeared in the April 2020 issue of der Vorgänger, the monthly magazine of Porsche Club of America’s Potomac Region. It appears here with permission.

Casey Parkin is a Certified Porsche Sales Manager at Porsche Silver Spring in Silver Spring, MD. He is an avid car enthusiast and Dog Dad.