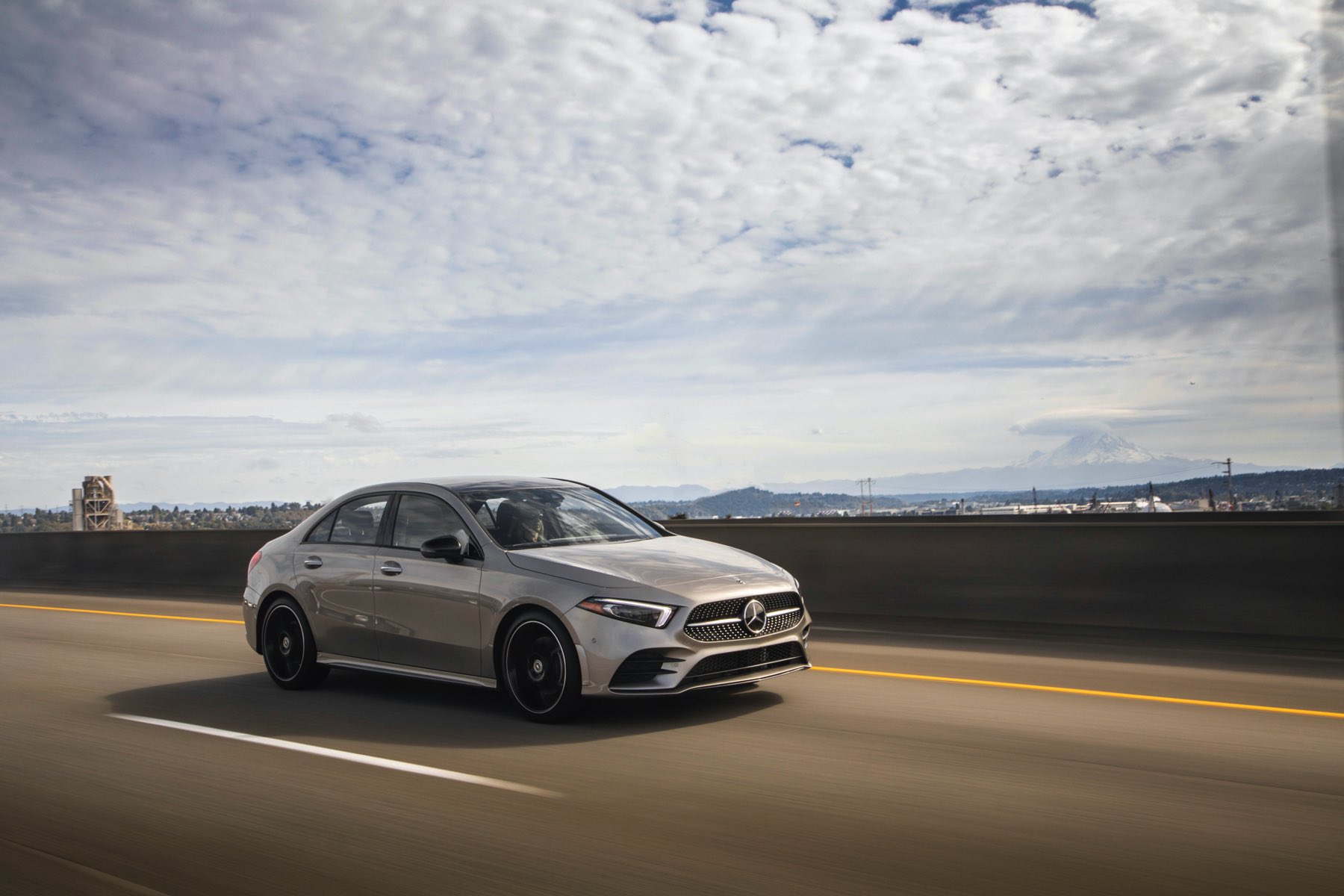 When introduced in 2013, Mercedes made an awfully big deal around its smallest entry-level sedan, the CLA. Choosing the Super Bowl for an early marketing push, the center of the messaging was the CLA’s $30K price point. As even the most casual automotive observer would know, you can drop $30,000 on Nissan’s Altima or Kia’s Optima without breaking a sweat, so even with a base price now around $33K the more recent A220 (the CLA is presented as a 4-door coupe) is accessible in a way that many luxury brands aren’t. The kicker, of course, is whether the perception of luxury can match the reality of luxury.

In the walk-up to the A220, you’ll not confuse the small Benz with Audi’s A3 or, for that matter, VW’s Jetta…unless, of course, you’re a casual observer taking a quick glance. I’m not a casual observer, and have grown to like the A-Class for its almost of-the-road footprint and coupe-like profile. It’s decidedly a 4-door, with all of the appropriate utility that goes with those four doors, but there’s an athleticism to its stance and profile that offsets the ‘sedan’ descriptive.

And since we’re talking footprint, the A-Class is similar in size to Hyundai’s Elantra and not, notably, a midsize Sonata or Honda’s Accord. And in referencing that, know we know they won’t be cross-shopped. But the wheelbase of the A220 is just an inch longer than the Elantra’s, while its overall length is two inches shorter than the Hyundai’s 182 inches. Their widths are essentially identical, and they’re within a ½ inch on height. Finally, under the hood the Hyundai – in turbocharged ‘Sport’ trim – supplies thirteen more horses and 26 fewer lb-ft of torque from its 1.6 liter turbocharged four.

Inside, the A220 offers a small swath of all-black MB-Tex, which might border on the oppressive were it not for the panoramic sunroof and splashes of brightwork sprinkled among the cabin. Optional colors, from a beautiful saddle brown to a two-tone black/grey combo, are available, but typically only in combination with expensive option packages. For its somewhat low roof access is pretty easy, and once inside you’ll find comfort appropriate to a compact 4-door; no more, but importantly, no less.

Our test A220 4MATIC was equipped with a Multimedia package and Premium package, both of which are added to enhance your digital experience. And if you buy a Benz you’ll get your own ‘genius’ at delivery. If, however, you simply borrow a Benz – as I did – you’re left to your own devices…or imagination. The volume control is intuitive, while changing a station is also, after a fashion. But for this set of eyes there’s a visual disconnect between the oh-so-modern 10.25-inch media display and the aviation-inspired vents and switch gear.

Under the hood is a 2.0 liter turbocharged four offering a (comparatively) modest 188 horses and a fully competitive 221 lb-ft of torque. Driving all four wheels through a 7-speed twin-clutch automatic, and with the drive setting moved to ‘Sport’, you’ll find all the urge you need for a run to 60 (just over six seconds), or a run to Des Moines. Like most good German sedans preceding it, the A220 4MATIC hunkers down and goes capably about its business, and the all-wheel drive means it can do that business in any of four seasons.

If, for this tester, there’s a pause in making the purchase, it’s knowing that for the same $40K I spend on a well-equipped A220 I could buy a nicely equipped C300, or take my pick of a CPO (Certified Pre-owned) C-Class just one year old and with fewer than 10,000 miles. In the C-Class you have a viable competitor to BMW’s 3 Series or Audi’s A4, along with a grown-up feel to go with its more grown-up profile. But then, there’s a lot to be said for the joy of youth, especially when your personal calendar has long since turned the page on youth (or you’ve misplaced the calendar…).

And speaking of youth, while living in Southlake a few years ago our neighbor drove the smallest Mercedes. She was a cheerleader; not (as I might have hoped) for the Cowboys, but for her high school.

The Leader of the Pack – The 2020 BMW X5 M50i
Hyundai’s Ioniq Hybrid: What to drive, post-pandemic
Event Calendar