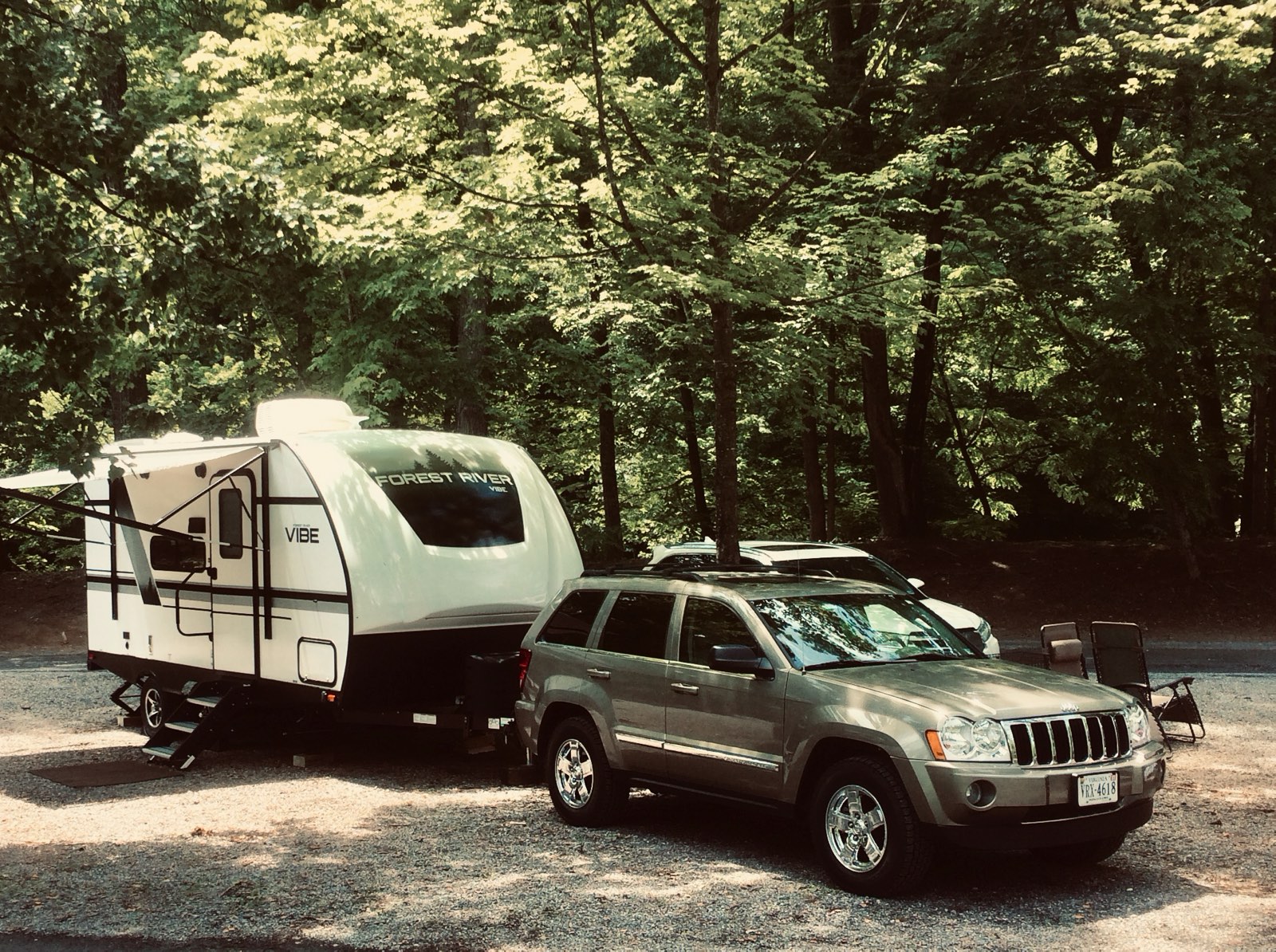 or our retiring life.

It began, as these things often do, with a birth. And, I’ll happily add, not just any birth; it was the arrival of our first granddaughter, Evelyn, at the end of this past January. My wife Tina had been in Los Angeles for the week prior to Evelyn’s delivery, and would remain there throughout the month of February. As the grandfather, my skill set (Italicized? All caps?) didn’t command the same high demand, so I visited for a week in early February, and then returned to our home base in Northern Virginia. At that time our plan was to travel to CA every two to three months, as we have a 7-year old grandson, Rhys, in Virginia; he, too, needed our attention, and we – of course – need his.

As Tina helped out in Los Angeles, the coronavirus was making its way into the U.S. And within a few weeks after her return to Virginia it had gained a credible (or incredible) grip on the entire country. The thought of flying to Los Angeles becomes increasingly problematic, so Tina and I begin casting about for alternatives to boarding a plane in early summer. And like thousands of others wanting to get somewhere in the continental U.S. without flying or staying in hotels, we began to consider an RV.

Renting a motorhome for a cross-country round trip seemed like a solution, so we took a look at one of the nationwide providers of rental RVs. But for roughly a month-long, roundtrip rental, the cost would be close to $6,000. In discussing the rental, I noted that the cost would represent a pretty decent down payment on a trailer. And with that, we went searching for a trailer in May, just as much of America seemed to be searching for a trailer.

For context, my folks – Don and JoAnn – had trailered for years, beginning with about 17 feet behind an Oldsmobile, and ending with – I think – 22 feet behind a Suburban; in short, a normal suburban progression. And while glad they could enjoy the trailer life, and pleased that they often traveled with our son Sean and daughter Lauren, Tina never thought she’d enjoy spending her vacation in a trailer’s kitchen, and I never wanted to tow the kitchen. With all of that, we went shopping.

The lineup that had gotten my attention over the last several years was the R-Pod. R-Pods aren’t, by any stretch of the imagination, an Airdream, but their tightly drawn footprint makes them easy to tow, and while neither Tina nor I were thinking ‘off-the-grid’ travel or camping, the R-Pod lineup communicates an all-terrain vibe that many trailers don’t. Built under the brand umbrella of Iowa’s Forest River, there was a dealer – Camping World – near us.

The folks at Camping World still had a decent inventory of trailers in May, but an R-Pod with a floorplan we liked wasn’t among them. A last-minute look at alternatives included a walk-thru of a Vibe 18RB, also made by Forest River. In Forest River’s trailer speak, that’s 18 feet in overall length – making it, as you’d guess, on the small side – and boasts a rear bath, hence ‘RB’. With a generous slideout for the dinette, an oversized fridge and a Murphy bed in the, uh, bow, it looked to be a great set-up for grandparents making the occasional trip with grandchildren. And with a departure date set for June, Rhys would be coming along with us.

If the window sticker at an RV showroom exists, we couldn’t find it. Somewhere in my memory is a document giving suggested retail, but it bears as much relevance to reality as most presidential tweets. Thankfully, negotiation – such as it was – proved to be straightforward, and we ended up with a deal that we were satisfied with. If there was a hiccup, know that the financing rates were competitive, but we couldn’t find a lender willing to make the loan for the period we were interested in, i.e., 60 months. Loan minimums were ten years, and that – of course – significantly increases the amount of interest paid if you take the full ten years to retire the note. I understand 10-years of payments for a $100K motorhome, while not understanding that same loan period for a $25K trailer.

Of course, once you’ve bought the trailer you need to tow the trailer, and the default vehicle was our vehicle, an ’06 Jeep Grand Cherokee. With 110,000 miles, the Jeep has been gently used. And with its 5.7 liter Hemi and 4WD it offers a tow rating of over 7,000 pounds, well in excess of our trailer’s 5,000 pound weight. But the Jeep was without a weight-distributing hitch, or any sort of suspension supplement to lift its rear end. We took those installations in steps, and roughly $1,500 later we were ready to Ho! Ho! Tow!

Fortunately, after that $1500 outlay we still had enough on the credit card to take a walk through Camping World’s accessory/support area, where – with a grocery cart – you can buy all the ‘etcetera’ that didn’t come with the trailer. Those supplies – most necessary, all helpful – included hose carrying straps, a high flow water regulator, a ‘fresh taste’ water filter, sewer hose, 15 feet of ‘slinky’ to support that hose, wheel chocks and leveling platforms. Or put another way, 500 bucks.

It was recommended by a good friend with a motorhome (begging the question – why didn’t we just borrow his motorhome?) that a few practice trips would make us more comfortable with the process. Our first stop was Verona, VA, about three hours southwest of our Northern Virginia zip code.

We had previewed this campsite on a daytrip a few weeks earlier, and while you wouldn’t call the grounds exceptional, it provided an easy-on/easy-off from I-81, while sufficiently removed from the Interstate to be quiet. And most of the campsites were pull-thru, a provision I wanted given my novice ranking among guys towing trailers. At that point the Grand Cherokee hadn’t been fitted with its air bags in the rear, so there was a bit of sag with the trailer hitched; thankfully, it wasn’t an excessive amount. Behind the wheel I was still looking at the road, and not – notably – commercial air traffic.

In that first two-night stay, at a campsite having water and electricity but no sewer, the only drama was our almost full gray water tank after just one night at the campsite. Thankfully, the campground offers a ‘honey wagon’, which – for but $10 – makes house calls. Within minutes our 30 gallons of gray water was taken away, allowing us the showers and dishwashing new campers find so indispensable.

Returning home, the air bags – made by Firestone and branded Coil Rite – were installed, which leveled the Jeep and, by extension, our mood. The second trip was closer to home, hanging out in what was essentially a Baltimore suburb in Montgomery County. Here I had to back in, but in the second outing I’m feeling more seasoned – and Tina’s taking, I’ll guess, her meds. Anyway, the campsite vibe was good, and our Vibe 18RB seemed like a fit. With 119 remaining payments, it’s a righteous feeling.

So, with two short trips in and Tina spending only God knows how much time planning our 8-days across the U.S., the western states blow up with Covid 19. Nothing in the reporting suggested we postpone, but everything from Oklahoma west was covered in new cases. We could envision being on the road with campgrounds closing, and our daughter and son-in-law not wanting to host us once we had arrived. In short, we pulled the plug on our cross-country adventure, with those 119 payments remaining on our trailer.

Since that postponement we’ve spent four nights near State College, PA, amazed by the beauty of the area just four hours from our driveway. But the next planned trip to Niagara Falls has been waylaid by New York pulling the welcome mat from out-of-state visitors, while Canada bars U.S. citizens from crossing the border. So we’re going back to PA, to a campsite with full hookups. And I’m backing in.

But we’re also going forward. After a gut-wrenching six months, Tina and I know we’re lucky. In retirement, we enjoy a roof over our heads, a well-stocked refrigerator, and the love of family and friends. In heading to a campground we’re reminded, in a one-on-one scenario, of our many blessings and, in a very small way, a handful of challenges. It’s life not as we know it, but something we’d enjoy getting familiar with. In a word (or two), we’re hitched.