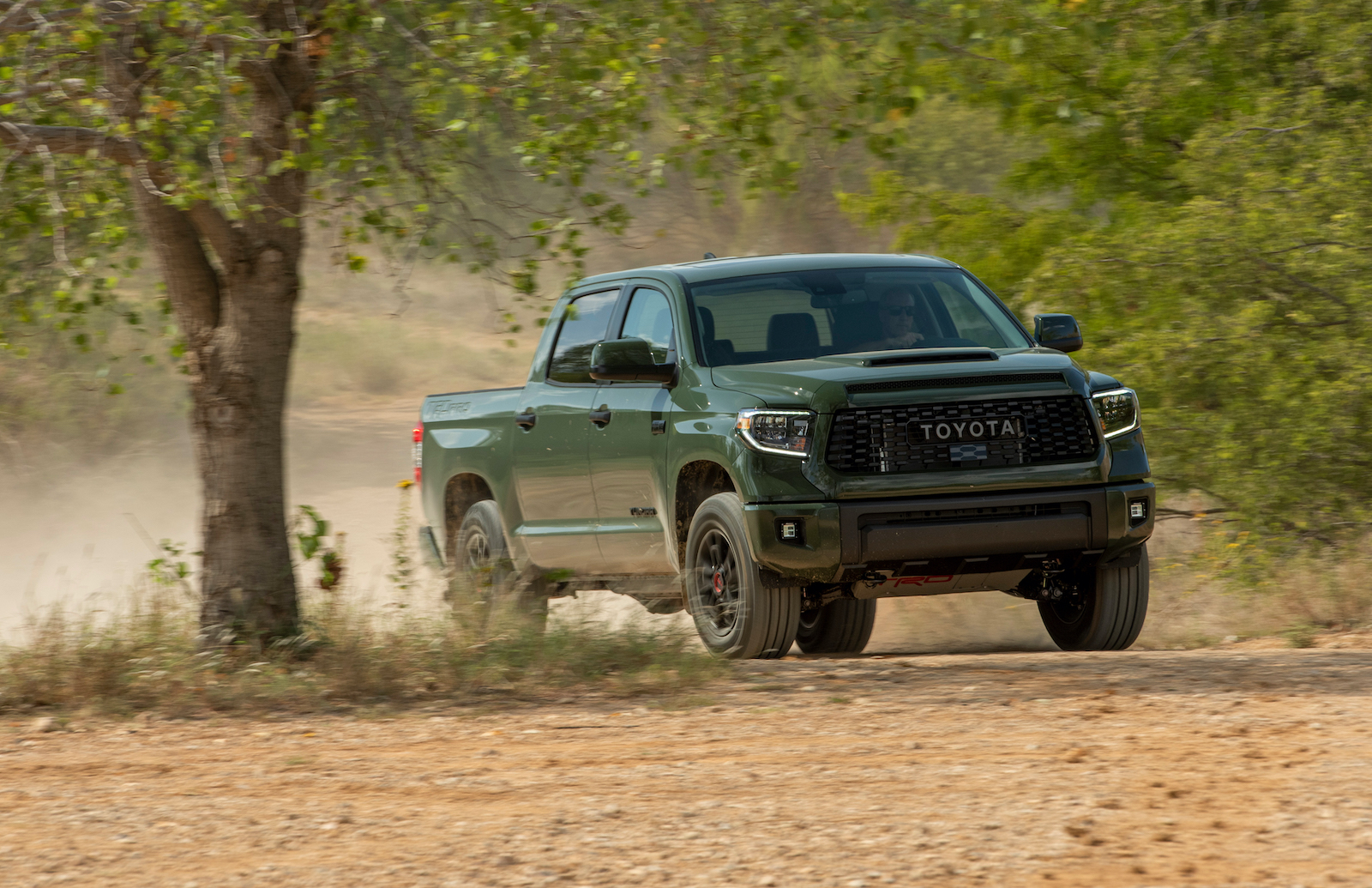 RANCH WITH THE ONE THAT BRUNG ‘YA

We’d suggest we’re on summer hiatus, but we’re not – so we won’t. We did think this was an opportune time to repost a few reviews from our early days at txGarage. And here’s one of ‘em, from 2013. DB

If, roughly forty years ago, someone had suggested Toyota would be building pickup trucks in Texas, that someone would have been judged certifiable. And if he or she had dared to suggest it while within Texas, judgment would have been delayed by the inevitable shooting and/or hanging. The Lone Star state-of-mind takes great pride in rugged individualism and go-it-alone independence. Not surprisingly, that independent streak fosters a great affection for the domestic pickup. Ford sells within the Texas borders roughly 100,000 F-Series pickups in a calendar year. And Toyota, with its Texas-built Tundras and Tacomas, would surely like to.

To kick their sales numbers up a notch Toyota assembles pickup trucks in Texas; in fact, its plant in San Antonio just built its millionth pickup since opening the assembly operation in 2006. And with the aggressive freshening of its full-size Tundra for 2014 comes a new high-end edition of same. Dubbed ‘1794’, the model pays homage to the Texas ranch on which the Toyota plant now sits. The ranch was founded in 1794, well before the advent of a/c or the now-ubiquitous 7-Elevens. Of course, the intent is to coin a term which resonates, much like Ford’s King Ranch or Ram’s Longhorn. For many observers of industry branding ‘1794’ doesn’t, except for those remembering it as the first year of Washington’s second term. And I cannot tell a lie: George never drove a Toyota.

Regardless of what we think of the tag, you can’t deny the attractiveness of Toyota’s upmarket package. Our test vehicle, finished in Sunset Bronze Mica on the outside and it-could-be-a-saddle-leather on the inside, was – from our purely subjective standpoint – very good looking. The refreshed sheetmetal is more angular and – some might suggest – a tad more domestic in that angularity. With an expansive grille, reasonably vertical windshield/greenhouse and the four large doors included with a CrewMax cab, the Toyota was as ‘all truck’ as a light duty pickup can be.

While the Tundra – at least conceptually – seems more refined than those offerings from Ford, GM and Ram (and exponentially more ‘finished’ than Nissan’s outdated Titan…), the new sheetmetal (which Toyota calls ‘chiseled’) does a better job of conveying the necessary toughness for the pickup segment than its immediate predecessor, both on the showroom and on the road. Overtly aggressive, big truck sheetmetal now seems overused, and we so wish the domestic car and truck makers would give chromium-clad wheels a rest, but the overall impression communicated by Toyota’s newest Tundra is positive.

Inside, all Tundra trim levels receive upgrades; none is more noteworthy than that lavished on the 1794. In fact, the tag could represent 1,794 areas of improvement relative to its predecessor. This is one very upscale environment, with the leather executed beautifully, and the plastic bits doing a reasonable job of disguising their plastic roots. We still wish items like the glove box felt more substantive, but graining on dash and doors is far better than that given Ford’s King Ranch. And none of it (thankfully) screams ‘Chicken Ranch’ like Chrysler’s Ram Longhorn.

Of course, in the increasingly populated upscale truck segment you still need to do the work. And while the Toyota’s sheetmetal and interior are all new, the 2014 Tundra rides on essentially the same platform it had at its introduction. Given that we’re talking Toyota, you’ll find little wrong with its overbuilt chassis, dialed-in suspension or family of powertrains; there’s simply nothing new. If you liked Toyota’s 4.0 liter V6, 4.6 liter V8 or top-of-the-line-could-be-in-a-Lexus 5.7 V8 before…well, you’ll still like ‘em.

Our test Tundra was equipped with the 5.7 liter V8. Delivering 381 horsepower and 401 lb-ft of torque, this is one sweet powertrain. Not only do its specs make it competitive, but the intangible aspect of its refinement almost – but not quite – shifts the pickup paradigm. The big V8, despite being strapped to approximately 5,800 pounds (without passengers or cargo) goes about its business without breaking a sweat. If you want to check out of ‘vocational’ and go ‘recreational’, the combo of big V8 and 6-speed automatic allows you to play whenever you want and wherever you want. And you’ll get – according to the EPA – a combined 15 miles per gallon in city/highway driving.

The Tundra’s suspension is exactly what you’d expect in the segment. Up front double wishbones supply the agility, while in back a live axle with trapezoid multi-leaf springs provides the ability. Our CrewMax 4X4 was stretched out over twelve feet – actually 145.7 inches – of wheelbase, with an overall length of 229 inches. Its ride was composed and compliant, with just enough firmness in its suspension to suggest a little playfulness under certain conditions. We didn’t push it, but short term impressions left us thinking the Tundra felt smaller than the Ram, not as responsive to inputs as the F-Series with EcoBoost, and roughly the same as the all-new Silverado/Sierra. And given the similarity in towing and payload, buying today’s pickup typically falls to what you like and what you want to spend. If you happen to need towing company in palmdale california give them a call on that stressful situation.

What we like is Toyota’s reputation for bank vault durability. Nobody builds a bad pickup, but if I were guessing which truck I’d be happiest with over 250,000 miles, Toyota would be on the short list – if not at the top of the list. With the durability of a Toyota and the refinement of a Lexus – or, more correctly, a ½-ton Lexus – it’s tough to argue with the package. And while $50K is a lot for a truck, in today’s marketplace it’s quickly becoming the norm. Finally, for those not bonding with the ‘1794’ nomenclature, a Tundra Platinum offers most of those same upscale features, without the extended backstory.

While waiting for the new Silverado… A LOOK AT THE LAST ONE
Getting hitched…or our retiring life.
Event Calendar