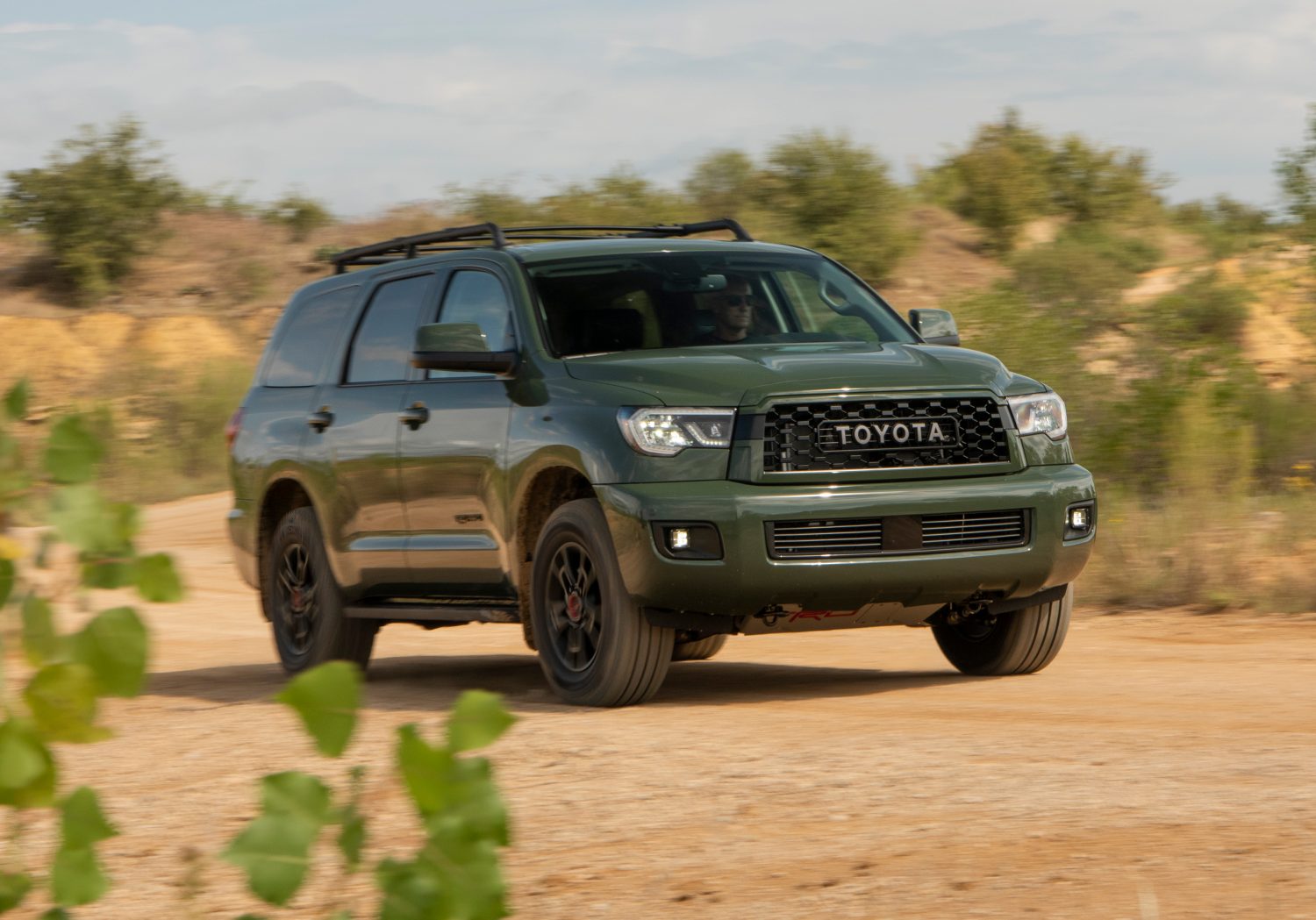 GOING GREEN – WITHOUT THE PRIUS

I’m often asked by new car shoppers what car they should buy. I always turn the question around, asking them what they’re looking for in a new car. Something fast and sleek? I’ve got a long list of those to suggest. Got to have a third row? That list is getting longer each year. Need something loaded with all the latest safety tech? Yup, the car makers are making sure those safety features get included on most new models.  There’s a vehicle for everyone, but a buyer needs to know what he or she wants in that new purchase.

If you ask me that question, I’ll tell you that I want something that is rock-solid reliable with a powertrain that can go 300,000 miles.  I’m not interested in the latest engine technology or the newest 12-speed transmission.  Give me a powertrain that has proven itself – that’s what I want in my garage.  And a full-size SUV that perfectly fulfills that criteria is the Toyota Sequoia.

I test drove an Army Green 2020 Toyota Sequoia TRD Pro that came along with a $64,624 MSRP.  This is Toyota’s most off-road capable Sequoia, and carries a $15,000 premium over the base model.  The 2020 model year is the first year Toyota has brought the TRD Pro designation to its big (but not biggest) SUV, and I’m sure it will attract more than its share of buyers – that Army Green exterior certainly got people looking and asking about the paint job.

The only engine choice for the Sequoia is Toyota’s venerable 381 horsepower, 5.7 liter V8; it’s been in the Toyota family since the 2007 model year, and also appears under the hood of Toyota’s Tundra and Land Cruiser.  Paired with a six-speed transmission, this big V8 has established – within its almost fifteen years – a stellar reliability record.  Its fuel economy ratings – on the other hand – are pretty abysmal, with the beast only getting 13 mpg in the city and 17 mpg on the highway.  But with gas prices comfortably sitting under $2.00 a gallon, fuel economy isn’t much of a concern for today’s drivers.

The TRD Pro upgrades take the Sequoia’s off-road capability to a new level with a chassis fortified by Fox aluminum-bodied internal bypass shocks, standard Multi-Mode 4WD, and off-road equipment specially designed or selected by Toyota Racing Development engineers.  I’ve driven this green monster over some rough off-road courses, and it’ll easily take a beating and get you back home safely. The ride is a bit rough over pavement, but that’s to be expected when considering all of its off-road equipment.

The interior is roomy with seating for eight.  Compared to the rest of the large SUV segment, the Sequoia’s interior seems dated, and is long overdue for a major refresh.  And in case you forget what you’re driving, there’s loads of TRD Pro badging to remind you.

The 2020 Sequoia TRD Pro is an awfully impressive, off-road-capable big SUV.  It’s not very fuel-efficient and it has an interior that can use a big overhaul.  It does have, however, a powertrain that should last for a very long time. It’s what I want to be driving for the next twenty years.