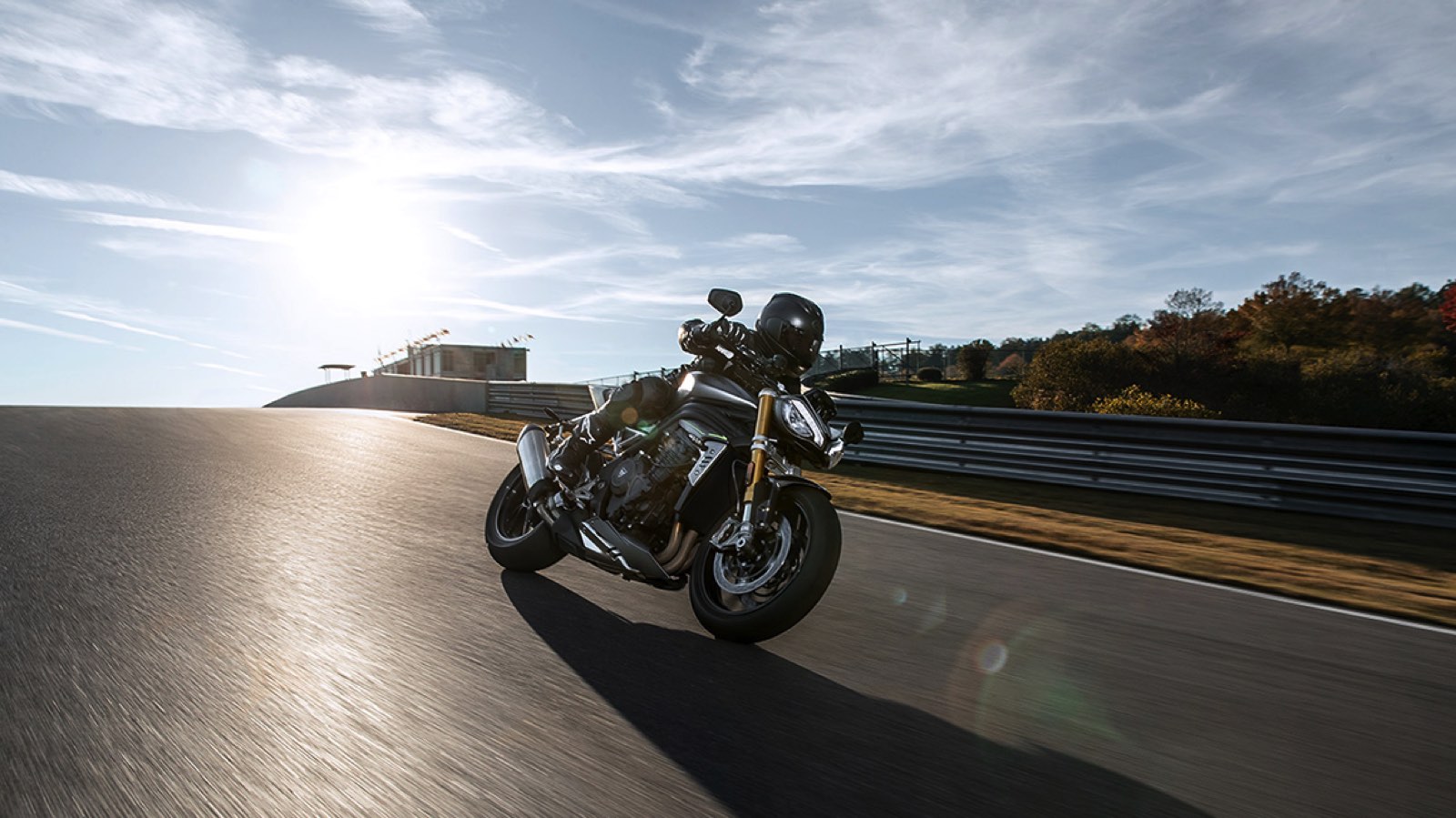 Dip a toe into any two-wheeled aspect of pop culture, and Triumph’s motorcycles race triumphantly(?) to the front. Dylan dumped one; Bud Ekins, as a stunt stand-in for Steve McQueen, jumped one; and in “Jurassic World” Chris Pratt scrambled – aboard a Triumph Scrambler! – to safety. In short, the classic Triumph twin is seemingly everywhere, a cultural statement today’s Triumph hopes to make with its newest lineup of triples.

And this may be the year. With the introduction of three triples, aimed at three distinct segments, Triumph may have scored a trifecta. At a recent preview hosted by a DC-area dealer, Your Reporter enjoyed a look at Triumph’s accessible Trident, adventure-oriented Tiger 850 Sport, and hellraising Speed Triple 1200 RS. For those of you shopping for a bike, you have three new options. And for those of us without a bike, our purgatory becomes less painful.

If you’re not familiar with the architecture of a triple, you should know it is (perhaps) the perfect mill for a motorcycle. With more inherent capability than a twin, and without the physical bulk of a four, a triple hits the sweetspot in both its packaging and performance, in almost any displacement category. And with a lineup that stretches from 660cc to 1.2 liters, Triumph offers a bike for any desire, matching its menu to almost every pocketbook. (Except, maybe…mine.)

It’s a clear sign of our economic times when an $8K bike is regarded as entry-level, but that’s our reality in 2021. And with that $8,000 base (plus destination and dealer prep – figure almost $9K), Triumph’s Trident 660 makes a credible pitch to the new(ish) rider, daily commuter and seasoned veteran. Its upright position and relatively low seat height imbue you with confidence, while 80 real horses and 47 lb-ft of torque allow the rider to separate from surrounding traffic, and – of course – the oppressive crush of the city.

Within its 660cc displacement, Triumph finds the middle with a footprint that’s not too large for a smaller rider, but big enough for the prototypical American male. And its nimble nature is reinforced by a dry weight of but 417 pounds, little more than the combined weight of you and the Missus. (Of course, if you and the wife combine for over 400 pounds, we’ll politely suggest each of you buy your own Trident…)

At the opposite end of Triumph’s displacement placement is its Speed Triple 1200 RS, the centerpiece of the DC intro. First launched over 25 years ago, the Speed Triple’s moniker was a polite nod to Triumph’s Speed Twin, the pre-World War II twin that effectively put Triumph on the two-wheeled map. But there was nothing polite about the first Speed Triple, and that base appeal is only magnified with the 2021 iteration. Boasting 177 horses and 92 lb-ft of torque, and sitting at a price point on that side of $18K, the 1200 RS is, to channel Elvis, a hunka’ hunka’ burnin’ love.

For me, the best purchase opp might be in the middle. There you’ll find Triumph’s Tiger 850 Sport, a variant of its venerable Tiger 900 with less content and a lower – offered at $12K plus shipping and prep – window sticker. Pitched by Triumph as providing “the perfect balance of accessible and intuitive everyday-riding capability,” from what I can see I’d have to agree. The Tiger 850 isn’t so big as to intimidate, but if you want to go from San Antonio to San Diego, it has – with 84 horsepower, 60 lb-ft of torque and a 5.3 gallon gas tank – the legs to do it.

All three triples are either on your Triumph showroom…or will be there soon. As you’d know, there’s only one McQueen or Dylan, but aboard a Triumph you can be your very best ‘you’. (And thanks to Wayne Dyer – or Oprah? – for the closer…)

LEXUS IS 350 F SPORT AWD: Lexus 3 Series gets a tune-up
Kia’s K5 GT-Line: By any other name, still a bargain
Event Calendar