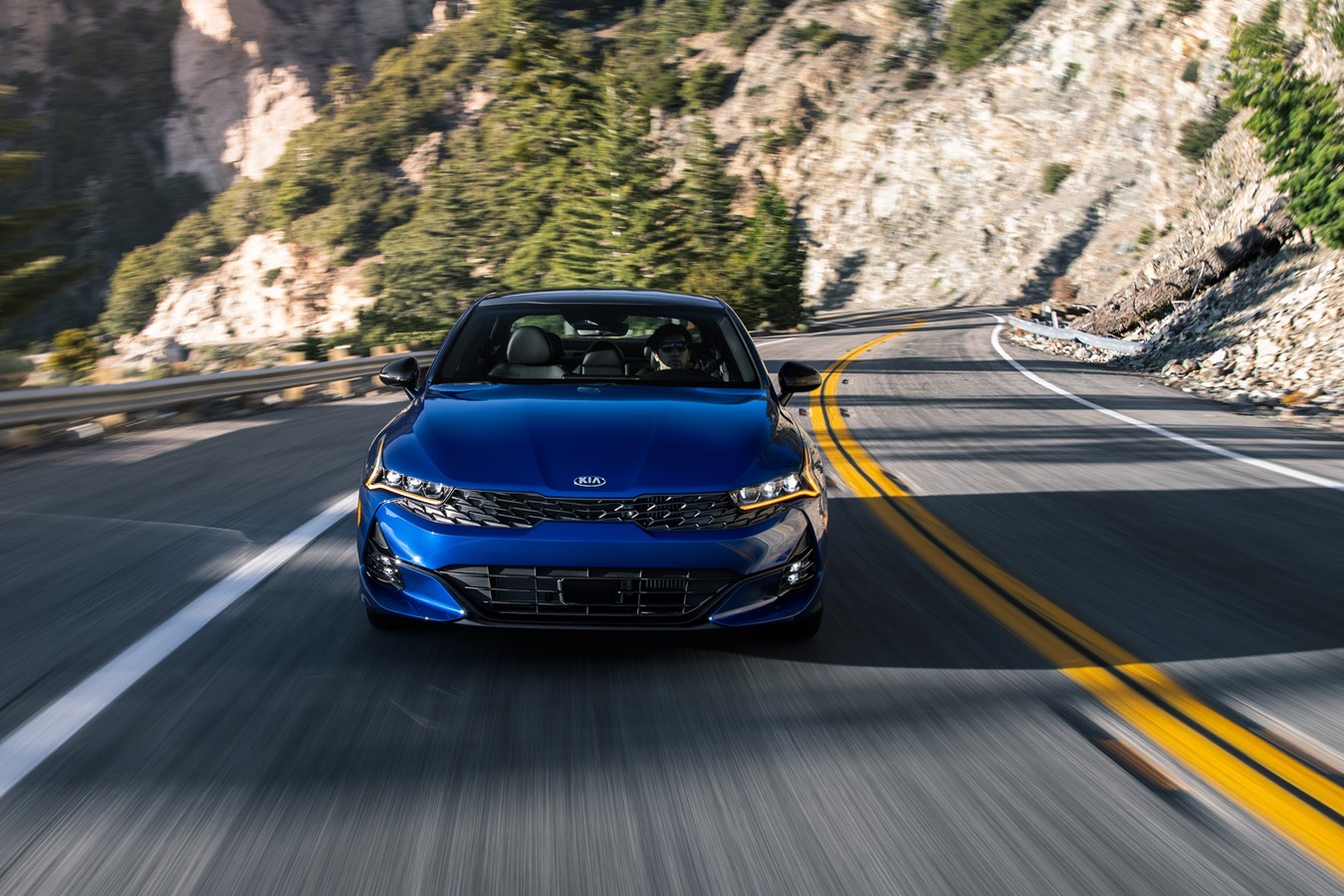 It’s been but a couple of months since first driving Kia’s K5, an all-new rebranding of Kia’s previous midsize sedan, the Optima. In that first drive we were provided the K5 GT-Line, which mixes a somewhat pedestrian drivetrain with less-than-pedestrian trim elements. (Think AC…before adding Shelby.) That GT-Line variant, with 180 horses under the hood and a $25K (or so…) window sticker, made for a surprisingly compelling ownership model, sitting on the showroom (or in your driveway!) at a price which typically buys Civics or Corollas. But if Kia’s GT-Line hints at the ‘Grand Tour’, the K5 GT is intended to deliver the Grand Tour – in spades.

We typically attribute the cubic inches/cubic dollars argument to the aforementioned Carroll Shelby, famous for kicking Ferrari’s *ss with cubic inches and (notably) Ford’s cubic dollars. In opting for the K5 GT over the GT-Line, you forego the hyphen in exchange for 110 additional horsepower and 116 lb-ft of additional torque. Whereas the GT-Line puts its perfectly adequate power down through an 8-speed automatic, the GT delivers its perfectly perfect power down through its 8-speed dual-clutch automatic. The dual-clutch is more abrupt, but it’s also more immediate. Waaaay immediate.

You’ll also enjoy, for your showroom bump of roughly $5K, a more sport-specific suspension and 19-inch rims. What you can’t put a price on (although your orthodontist did) is the smile that lights up the interior with each poke of the pedal. In independent testing the K5 GT was faster than both BMW’s 330i and Audi’s A4 from 0-60 and in the ¼ mile, although we’re not sure anyone in this particular segment is racing for pink slips. What I found compelling was the immediacy of the K5 GT’s reflexes; while the GT-Line model was comfortably composed, the GT’s platform was comfortably nailed. It was exactly what you’d hope in a premium European platform, one that is assembled not in in West Point, Georgia, but somewhere in western Germany.

Our test example, with a base price of $31,700 with destination, is an absolute steal. And even with $4,000 of GT1 package, which includes an absolute bevy of comfort, audio and tech upgrades, it remains a h*lluva good deal. Were it ours, we’d probably opt out of comfort, audio and tech upgrades and enjoy only its dynamic fluidity at any and all speeds, whether you’re simply bouncing around your ‘burb or heading to Austin at extra-legal speeds. As we wrote two months ago, the GT-Line is a compelling value; this new K5 GT offers compelling velocity.

From this armchair perspective, the only significant competition to Kia’s K5 is on that same Kia showroom. The rear-wheel drive Kia Stinger, with – at the moment – a 2.0 liter turbocharged four, is available at a starting point of $35K, which bumps you about a $100 in the monthlies if opting for sixty of those monthlies. And given that the Stinger has more than a bit of Porsche’s Panamera in its vehicular swagger, I think it’s worth that bump over those five years, plus the five years you could enjoy the car after you’ve paid it off.

With fewer horsepower you won’t be racing BMWs (you can race ‘em, but you won’t beat ‘em), but you can enjoy the premium sensations that a rear-wheel drive platform invariably convey. And I also like the versatility that comes with the Stinger’s hatchback; it ain’t a crossover, but it can swallow your stuff like a crossover…and we all have stuff.

So, if you have $30K buy the K5 GT. And if you’re blessed with $5K more? Kia’s Stinger removes the ‘sting’ from driving and owning affordable transportation. With either one, you won’t go back to a German sedan. As at least one impartial observer has suggested, in the affordable sedan segments the Germans are dead, and the Japanese should be checking their rearview mirrors.