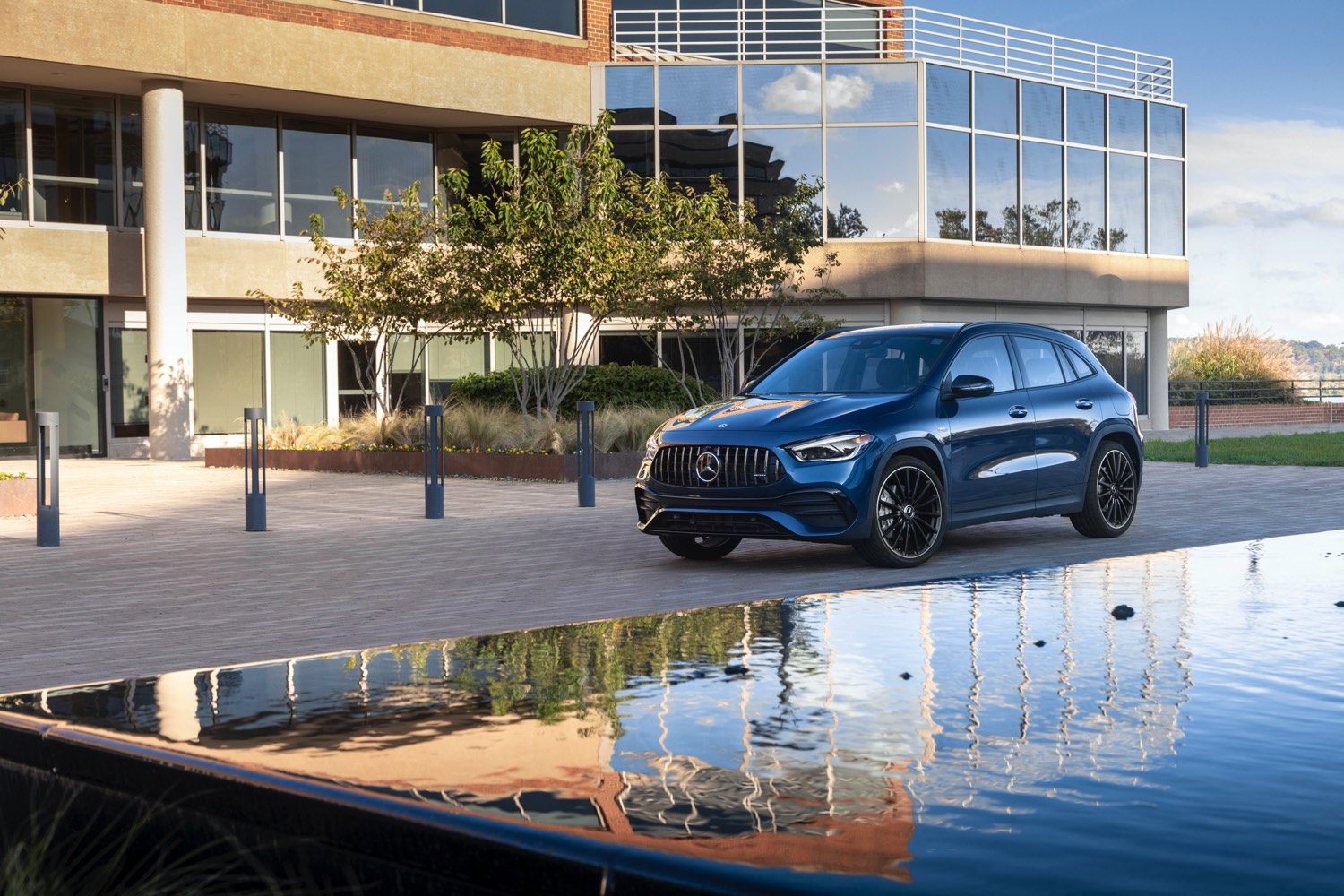 Our neighbor got behind the wheel of the 2021 Mercedes-Benz AMG GLA35 4Matic sitting in our driveway and wanted to know “is this a jet plane?”.  If he had been authorized to drive the new AMG GLA35, he might have realized just how correct that first impression was, as this new member of the Mercedes AMG family is a blast to drive.  Each time I drove this AMG crossover I so enjoyed getting on the highway, hitting the accelerator and blowing past my fellow travelers.  Yup (or ‘ja’ – ed.), this is another winner from the engineers at AMG.

This new Mercedes-Benz GLA model was introduced last year to replace an already popular model in the Benz lineup.  This new model is taller and roomier, while being just a smidge shorter.  According to the company press release, the GLA is a sporty, life-style oriented SUV.  Even though I’m certain I’m not anywhere close to the demographic targeted by the GLA marketers, I immediately fell in love with the car; it was just so much fun to drive.

The Patagonia Red Metallic 2021 AMG GLA35 4Matic I test drove arrived with a $55,900 window sticker. By comparison, a base Mercedes GLA costs $36,230. Under the hood of the GLA35 is an AMG-engineered 302 hp, 2.0 liter inline 4-cylinder turbocharged engine mated to an eight-speed automatic transmission. It’s the same engine that’s in the Mercedes GLA but, somehow, the AMG engineers are able to squeeze an additional 80 horsepower out of it.  And that kind of extra oomph makes a big difference.  Fuel economy ratings aren’t too shabby, either, with the AMG GLA getting 23 mpg in the city and 29 mpg on the highway.  I didn’t hit those numbers since my lead foot was having too much fun passing other cars.

The exterior design of the GLA extends those distinctive AMG touches from the radiator grille to the AMG lip on the roof spoiler and its two round tailpipe trims. With these mods, the AMG GLA won’t be easily confused with its Mercedes-Benz brother.

The AMG theme extends to the interior; the seat upholstery is in black microfiber with contrasting topstitching in red with red seat belts. The instrument panel shares a widescreen with the MBUX infotainment system, giving the cockpit that aeronautical vibe – as my neighbor suggested, you feel ready to take off.  To help you keep your eyes on the road, the MBUX system can be activated merely by saying “Hey Mercedes,” and software has been designed to recognize and understand practically all commands common in infotainment and vehicle control. Pretty futuristic stuff.

The new GLA now features something called AMG Dynamics, an integrated handling control system engineered to intervene to keep the car on the road, making for a safer ride.  For instance, when cornering hard the system steps in with imperceptible braking intervention at the rear inside wheel.  The effect is one that the everyday driver won’t notice, and yet it assists in maintaining constant control of the vehicle.

There’s so much more to the new AMG GLA that makes it one of the most fun cars I’ve had the privilege to test drive in a long time.  Considering the almost affordable MSRP of less than $60K, it’s clearly on my list of top ten cars of 2021.