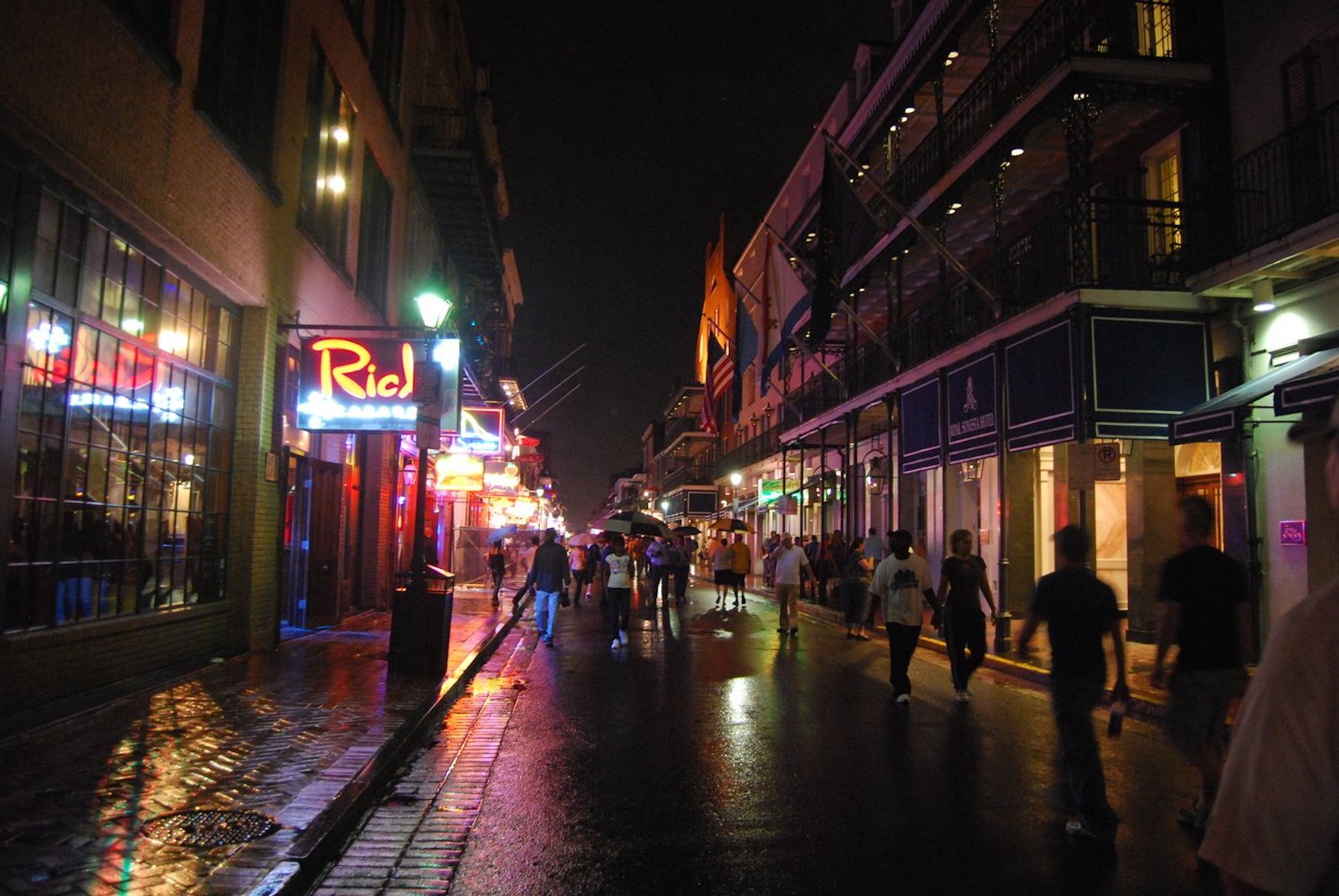 It was late in the evening when finally we rolled into the French Quarter. Crowds were everywhere, and yet we managed to find a safe, quiet place to stop – for a few minutes – while we checked our maps. Or so we thought.

New Orleans is rarely quiet, and never on a Saturday night. We had pulled up in front of what appeared to be a courthouse. Within a minute or two a drunken woman standing at the top of the courthouse steps began hurling profanities down at us. “Get out of my city,” she said. She said it over and over, although her delivery contained a lot more colorful (and unprintable) verbs and adjectives. We weren’t in Kansas anymore, Toto!

What set her off I don’t know, although probably just our appearance in her quiet piece of the world. Maybe our motorcycles. Maybe she was simply tired of seeing strangers wandering about. Whatever it was, we knew that the rage she directed at us came from somewhere else – we’d done nothing to upset her. We didn’t even know she was up there on the top step by a column, until she cursed our presence on the planet.

We were just in the wrong place at the wrong time on that sweltering summer night. And it wasn’t what we were expecting after our rain-filled and welcoming day in Alabama and Mississippi.

We were in the city now, not the country – and we were in the Deep South. The rules were different here for different people. We were tourists on a tour, who had somehow wandered, if only briefly, from the tourist route. And we knew we needed to get back on that route. So we did.

The French Quarter on a Saturday evening is a continuous earful of jazz, rock ‘n roll, and boisterous partygoers. The crowds of people are mostly from out of town, having come to New Orleans from everywhere else, converging on Bourbon Street and its French Quarter.

Because of that traffic literally stands still for much of the night. Emergency vehicles thread their way down Canal Street using the middle of the avenue, sharing space with street cars. Getting around is best done on foot, but that wasn’t an option for us. Everything we owned was tied onto a sissy bar on the back of a motorcycle. Not exactly the safest place to leave it while you explored on foot. So, we took in the scenes from our saddles, not our boots.

We hadn’t planned to be here on a Saturday night, but here we were. Our original plan had us in Knoxville for a night or two before arriving in New Orleans, on either a Sunday or Monday. But we were a day ahead of that schedule and we had to deal with that as best we could.

The odds of finding my buddy Tom, who had departed Knoxville for New Orleans with his girlfriend the previous day, lay somewhere between slim and none. Maybe not even that good.

But we knew that. Nonetheless, we inched our way down Canal Street and made a perfunctory second stop where Canal intersects Bourbon Street – no danger of it being too quiet there! The crowds literally poured like a river out of Bourbon Street and onto Canal, adult beverages in hand, while a lone saxophonist, parked under a marquee, played Amazing Grace as passersby dropped donations into his instrument case.

This was the New Orleans we had heard about, read about and seen pictures of…and none of that had done New Orleans justice. And it was only midnight. The partying had just begun.

At Bourbon Street we dismounted our rides and parked them at the curb while we took in the scene. Suddenly a man in the crowd dashed toward us at full speed, screaming while he ran. Behind him, a woman was screaming at him. We’d found Tom!

And right where you’d expect to find anyone from anywhere on a Saturday night. At the corner of Bourbon and Canal streets. Where else?

Tom’s girlfriend Beth turned out to be the woman in the background screaming. She had no idea what was going on. In her retelling of that meeting, Tom had suddenly dropped her hand and was racing through a crowd of strangers on a wide and densely packed sidewalk, toward two bikers. And he was screaming, and she was scared for him. It probably didn’t help that one of the bikers was also racing toward Tom, or that when they reached each other a second or two later Tom and the biker dude appeared to be locked in some sort of death grip, right there in front of Beth. She thought it was over and she’d need a new ride home.

The death grip turned out to be a bear hug and bear hugs are a contact sport. They generally involve a lot of jumping up and down and not much letting go. And that was exactly what scared Beth, until at some point Beth realized what was really going on, and she relaxed.

Introductions were made all around. Beth was from Vicksburg, Mississippi, and her dad worked on “The City of New Orleans”, the Illinois Central train that Steve Goodman chronicled and later recorded.

As reunions go, this one was brief, a footnote in time as they say. If it lasted more than 15 or 20 minutes I’d be surprised. Tom and Beth had more partying to do, and the night was still young for them. John and I wanted to ride around New Orleans some more before finding somewhere outside the city to camp. So we said our good-byes and went our separate ways.

That night we camped on a levee overlooking the Mississippi River. The same Mississippi River that inspired Samuel Clemens to write his stories under the pen name Mark Twain. Although it was my first visit to New Orleans, and the briefest of visits at that, I knew that it wouldn’t be my last. I felt the draw of the Crescent City.

But this was a motorcycle ride. So for now it was Horace Greeley’s advice that ruled the trip – “Go west young man. Go west!” And we did. After a good night’s sleep, we’d ride across Louisiana and into Texas.