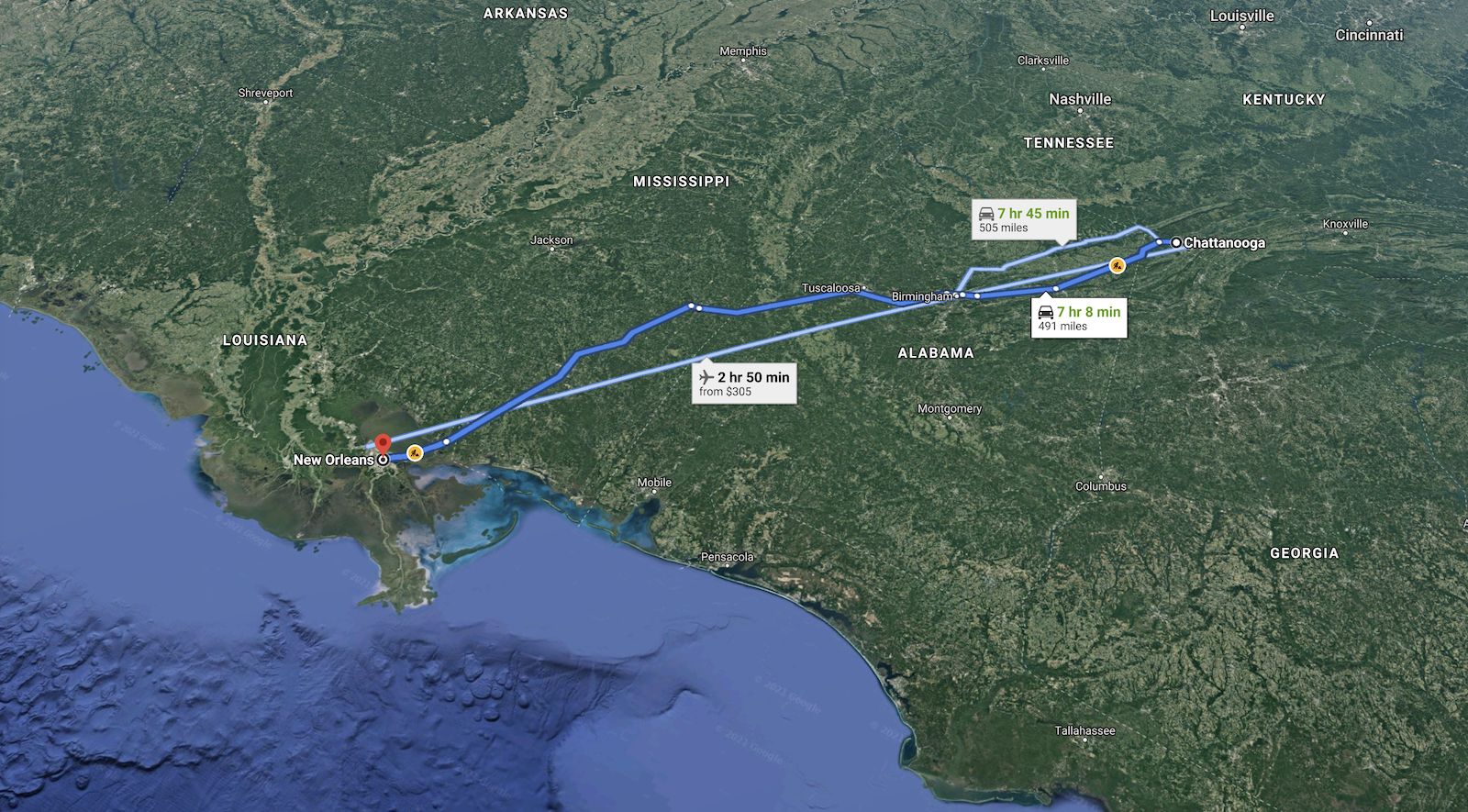 ON TO NEW ORLEANS!

Chattanooga to New Orleans is 500 miles, according to Google Maps. So far the weather had been our friend. But that was about to change. There was heavy rain in the forecast, all across Alabama and Mississippi. We were about to become riders in the rain.

Both the Honda 750F and the Yamaha 650 are what is now referred to as naked bikes. They had no fairing, no gas tank bag, no saddlebags. There were no heated handlebar grips or electric riding suits. There weren’t even real rain suits, like those that exist today. So anything you hoped to keep reasonably dry you wrapped in trash bags, or maybe a poncho if you were lucky; and that, of course, included yourself.

With any luck and a little planning you might be able to keep your sleeping bag dry, as long as it didn’t rain too hard or for too long. Most everything else got wet, to a greater or lesser degree, depending on the storm. But on a motorcycle, rolling down the highway at 60 or 70 mph, everything also gets dry again. Eventually.

The worst of the day’s rain descended upon us in the afternoon as we entered a small town near the Alabama/Mississippi state line. We needed gas, but we didn’t want to stop until we had to. And now we had to, or we’d risk running out of fuel – and then  having to push our scooters, in the driving rain, back to the nearest gas pump.

So seeing a gas station up ahead. we slowed down and headed for the pumps. Gas pumps just sat out on an island, along with a squeegee and a waste barrel. There was no cover overhead to protect you from the elements while you filled up. So I’d resigned myself to having to stand in the pouring rain while filling my fuel tank.

On a bike, filling a fuel tank is not a quick activity. Generally, you have to dismount, set the kickstand or centerstand, open the gas tank, and hold the pump nozzle out just far enough that you can see into the tank and determine when to stop filling.

But before I got to the pumps, I saw the garage bay door roll up and someone frantically waving at us to come inside that garage. As we rode closer I could hear someone saying “Come on in out of the rain!, Come on!”

If it’s 1971 and you’ve just recently seen Easy Rider, there is a certain understandable hesitation before you accept any invitations from strangers. So I hesitated, but only for a second or two before heading straight toward the man waving at me to pull into that service bay.

The legendary New Orleans troubadour, Dr John, used to say to the crowd before each concert, “You’re in the right place. And this is the right time.”

We were, and it was.

We were somewhere dry, even if we weren’t dry. The rain was coming down so hard that no one was stopping at the station and you could barely see the gas pumps from the garage.

But inside the garage bay, someone was handing each of us an ice-cold Coca-Cola and some towels to dry off. Big smiles and a lot of laughter greeted us. From folks we didn’t even know.

“Where y’all from?”, was only the first question of many. Who were we? Where’d we ride from? Where were we heading? And what happens when it rains? Well, we get wet.

This wasn’t Easy Rider. This was pure southern hospitality. Chairs came out and water got wrung out of our clothes. Food was offered in the way of homemade sandwiches and snacks. Fresh garbage bags even appeared, and we gratefully accepted them.

After about an hour, a break finally appeared in the storm,  along with a glint of sunshine that we correctly predicted wouldn’t last long. And we were right about that sunshine. We had miles yet to travel today if we hoped to reach The Big Easy. So we gassed up the bikes, thanked our hosts, and once again headed down roads we’d never ridden before.

I don’t know who those people at the gas stations were, or even what town we were in, and I probably never will. But I’ll never forget that garage door rolling up, or the hour that followed.

Watching Easy Rider was never the same for me. My memories of riding through the South that summer were much different.

Alabama and Mississippi are beautiful states to travel through. We’d done a combination of backroads and Interstate to cover the distance to New Orleans. We rode past lakes and farms and fields, through small towns and around larger cities, wherever we could. A few years later, Kawasaki would build an entire ad campaign around experiences like we had. Their slogan: “Because getting there isn’t why we ride. Riding is why we go.”

It was getting late in the day, but we pressed on towards New Orleans. We’d finally left the rain behind us. The warmth of a humid summer night (and the wind we generated) made riding more comfortable.  Our riding gear, except for our leather boots and gloves, was almost dry by the time we entered the French Quarter.